‘Tis the season for chilly nights — so what better place to spend time with friends than by the fire in a cozy nook? Relax and warm up at these 11 New York City bars with fireplaces.

When I was in my twenties and worked in New York City’s West Village neighborhood, I frequented bars with bargain happy hours that matched my entry-level salary. My friends and I would order whatever drinks were on special and share appetizers so we wouldn’t go broke before our next paychecks. But every winter, we allowed ourselves one night to splurge at a fancy establishment with a roaring fireplace — somewhere warm, cozy and candlelit.

This year, I decided to revive that tradition by meeting various friends and family for seasonal cocktails around New York City. So I did some scouting to find 11 of the best spots to sip a drink by the fire. 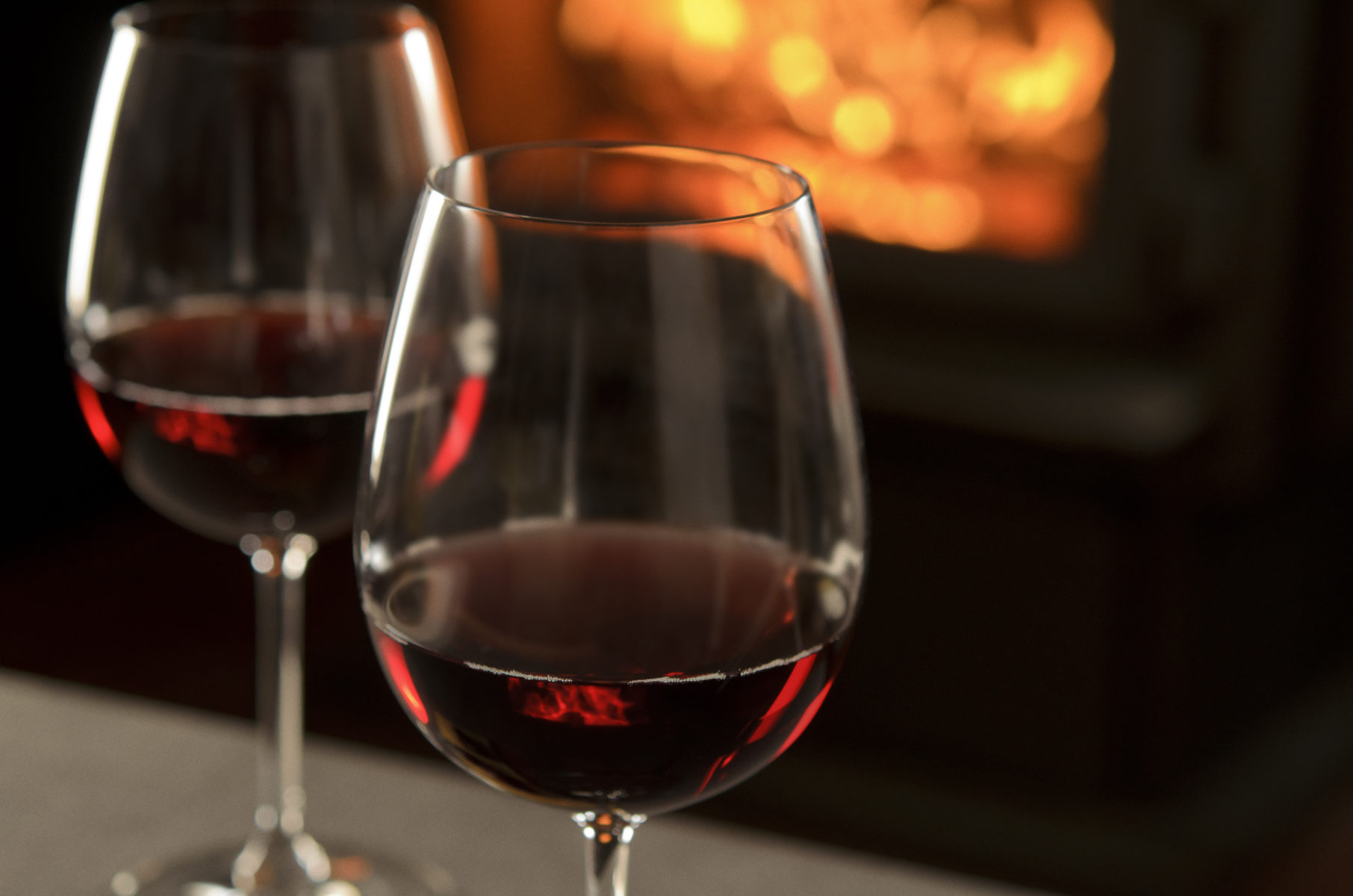 Comfy and Cozy in the West Village

When you walk into One if by Land, Two if by Sea, you feel as if you’ve stepped back in time — in more ways than one. The upscale restaurant is in a landmark, 18th-century carriage house that once belonged to Aaron Burr (yes, the guy who out-dueled Alexander Hamilton in 1804). It was also one of my favorite winter spots back in the day, thanks to several fireplaces. During my recent visit, I sat at the bar, grabbed a menu and surveyed the $20 cocktails and $18 glasses of wine. Generally, I would have scoffed at the prices, but hey: splurging was a December tradition, so I ordered a glass of cabernet.

Elsewhere in the neighborhood, Employees Only boasts a fireplace that crackles coziness on cold nights. The bar décor calls to mind a sophisticated Art-Deco-speakeasy, while the drinks menu features craft cocktails — such as a Ginger Smash, a gin elixir made with muddled ginger root, fresh cranberries and apple liqueur — and the clientele is primarily young professionals.

Another day, I popped into nearby Tavern on Jane and immediately thought, “Why haven’t I ever been here?” There wasn’t an iota of pretense to its brick walls, worn wooden bar stools, tin ceiling or the (requisite) small fireplace. The menu was chock full of comfort food (think burgers, wings and fish ‘n chips), plus plenty of wine, draft beer and whisky.

My final West Village discovery was The Marlton Espresso Bar, an intimate spot inside The Marlton hotel. A swoon-worthy fireplace dominates the oak-paneled space, where comfy sofas make it an inviting spot to linger. On a nippy Wednesday night, the bar teemed with locals and guests sipping glasses of red wine and mugs of coffee with a little something extra to ward off the chill. 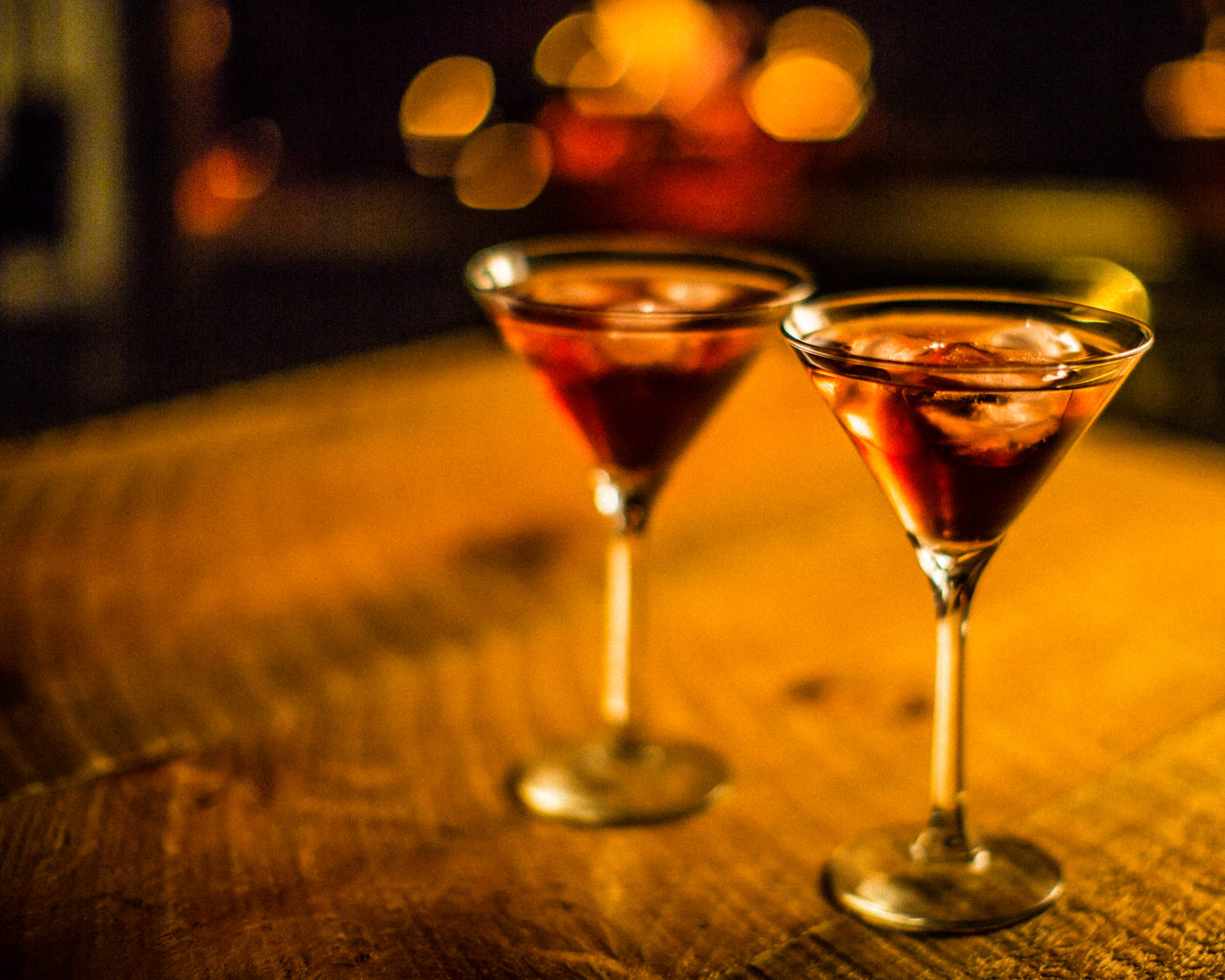 Rum and Romance in the East Village

The East Village wasn’t my go-to neighborhood when I was younger. But if I were in my twenties today, I might just hang out at Kingston Hall, shooting pool and sipping a Drunken Coconut cocktail (Appleton Gold rum, fresh coconut water and pineapple juice, served in a coconut shell). I’m not quite sure why there’s a fireplace in this Caribbean-inspired bar, but it suits the space nonetheless.

Another great option in the East Village is Baci e Vendetta. The minute I walked into this small Italian wine bar, I knew I wanted to return — on a date. The trattoria was filled with couples, including one lucky duo seated near the fireplace. As for me, I made a mental note to come back soon to share a bottle of Brunello di Montalcino and small plates of burrata and bruschetta with my Signor Right.

If you want to secure a seat near the fireplace at any of these establishments, try to arrive shortly after they open — or at least before 5 p.m., when the post-work crowd typically starts to file in. 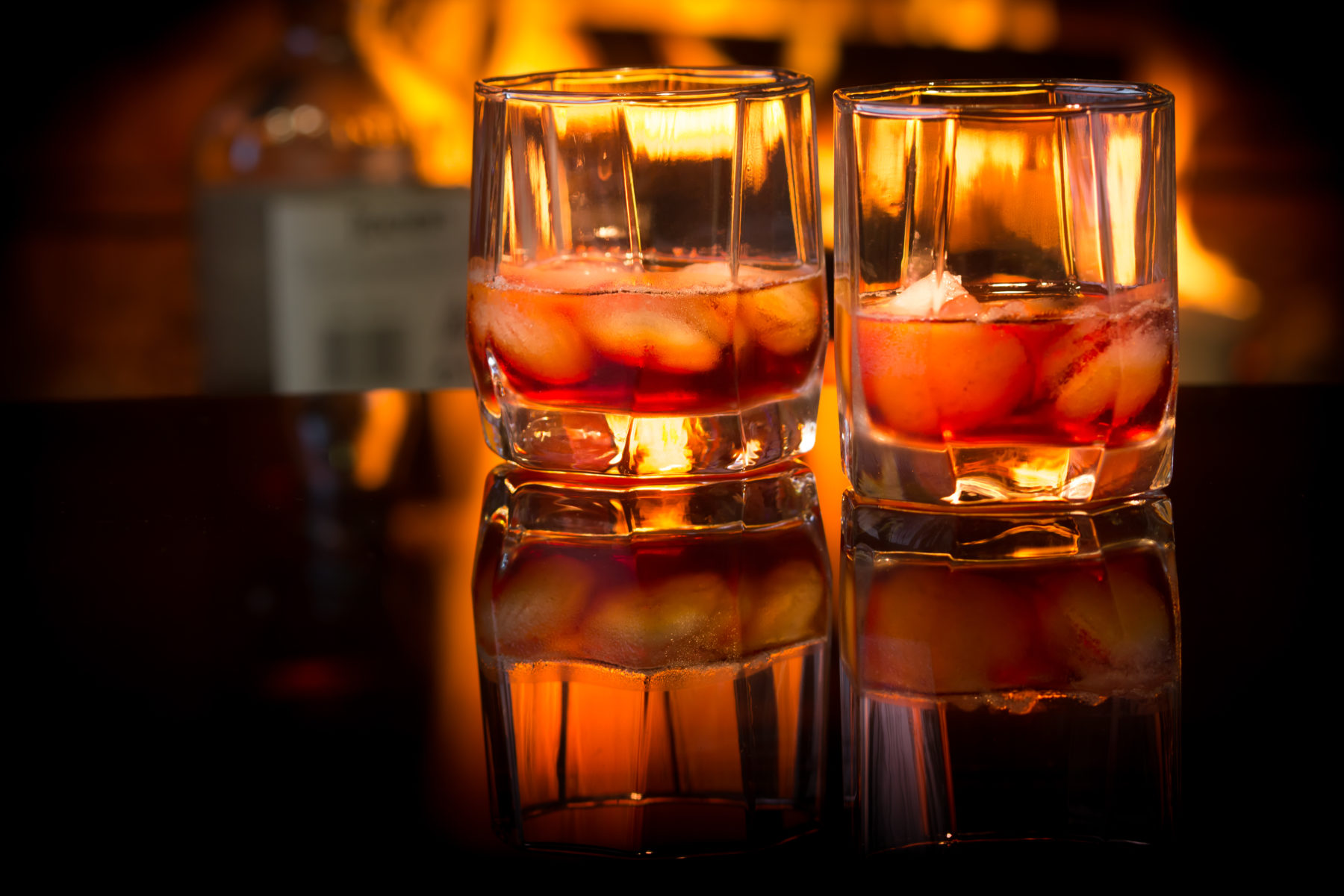 The vintage pub Whitman & Bloom is the perfect locale for a girls’ night out, offering lengthy happy hours throughout the week and all day on Sundays. Sit near the fireplace — which is tucked away in the back — and enjoy glasses of malbec and plates of yummy roasted Brussels sprouts sautéed with bacon. Or opt for comfort food like the four-cheese mac.

Across town at The Drunken Horse, I ordered a South African pinotage and lingered near the red brick fireplace flanked by a sofa and two chairs. The wine bar features a nice selection — including a nightly red flight special of four wines for $16 — as well as Mediterranean-inspired small plates. 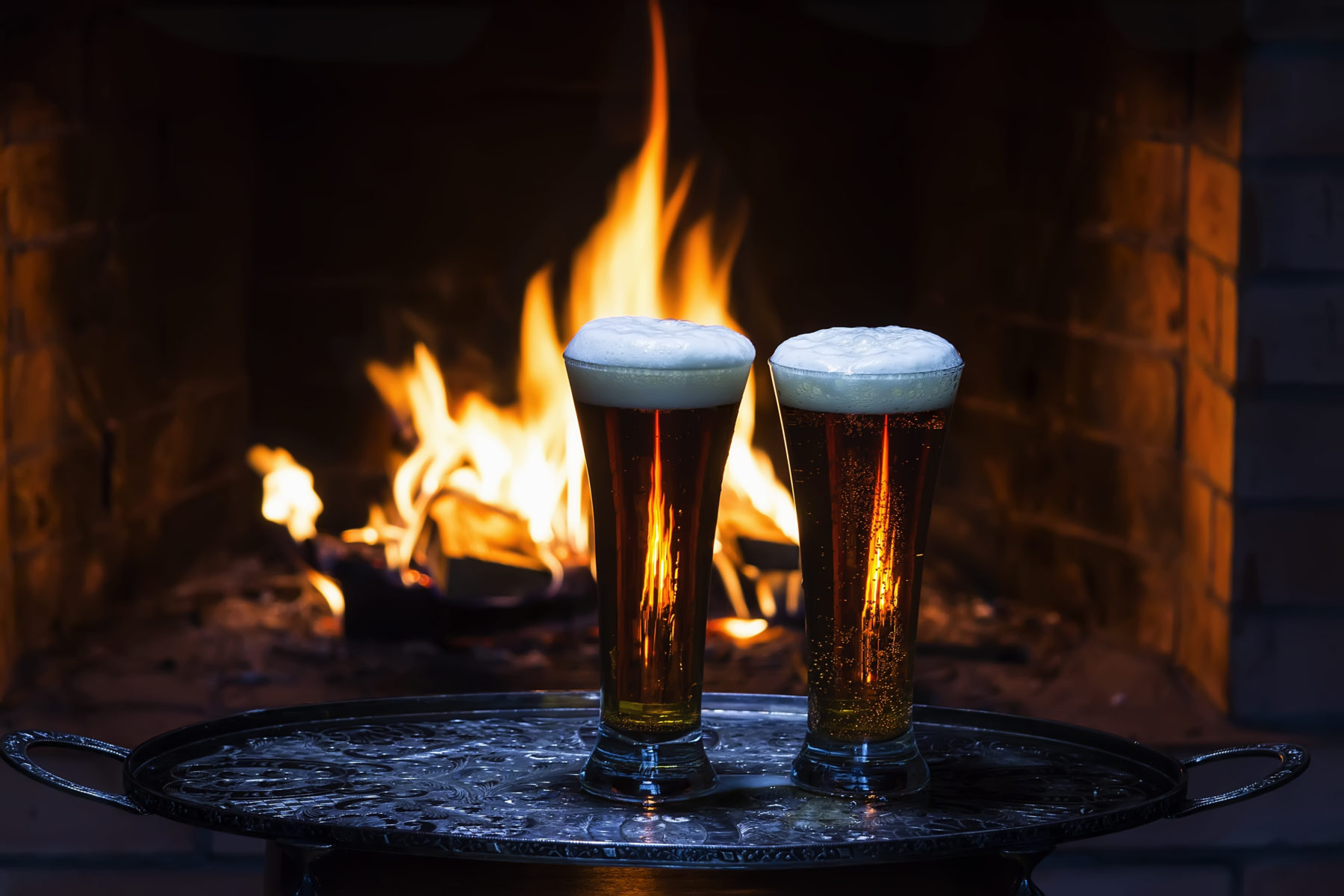 Classics and Clubs in Midtown and Central Park

I’ve been to Keens Steakhouse, a New York fixture dating back to 1885 and known for its Scotch whisky list, dozens of times over the past 20 years. But I stopped in anyway to make sure the fireplace in the historic Pub Room is still working. It’s a popular and crowded spot, especially before Knicks or Rangers games at nearby Madison Square Garden, so arrive before 5 p.m. or after 8 p.m. to snag a table close to the hearth.

A few blocks away, I visited Fine & Rare, which was recommended to me by a friend. The bar channels old-New York charm with tufted leather banquettes, live jazz and rare spirits (from scotch and bourbon to cognac and Armagnac). Sophisticated cocktail options include the Garden of Eden, a spin on the gin and tonic made with rosemary, thyme, olives, basil leaves, and a dried lemon peel garnish all served over a juniper berry ice ball. The atmosphere was buzzing when I visited, and the fireplace was near enough to the bar that I could still enjoy it while perched on my stool.

Finally, there’s the legendary Central Park restaurant, Tavern On The Green, which reopened in 2014 after being closed for four years. Since then, I’ve found myself regularly visiting the lovely circular bar in the summer to escape the heat — but when I stopped by this winter, I realized the space is seasonless. I promptly ordered a cabernet, and then relaxed next to the elegant plaster fireplace. Two sculpted sheep’s heads adorn the hearth, a nod to the building’s original purpose of housing the animals that grazed in Central Park’s Sheep Meadow.

Fireside drinks and chats with friends may have been a once-a-year splurge in my twenties. But after scouting New York’s coziest spaces, old and new, I’ve come to an important realization: it’s a great tradition to enjoy all winter long.

Sometimes sitting right in front of a fireplace can be a bit too hot, especially if the space is crowded. If you run warm, opt for a seat a bit further away with a view of the flames instead.