Maui, Hawai‘i stands out from other tropical hideaways, thanks to some of the planet’s most remarkable natural destinations and out-of-the-ordinary attractions.

There is a plant that grows at the top of Haleakalā National Park that you must see. It’s called the silversword, and of all the things on Maui that can rightfully be described as otherworldly, the rare silverswords might be the most out of this world. 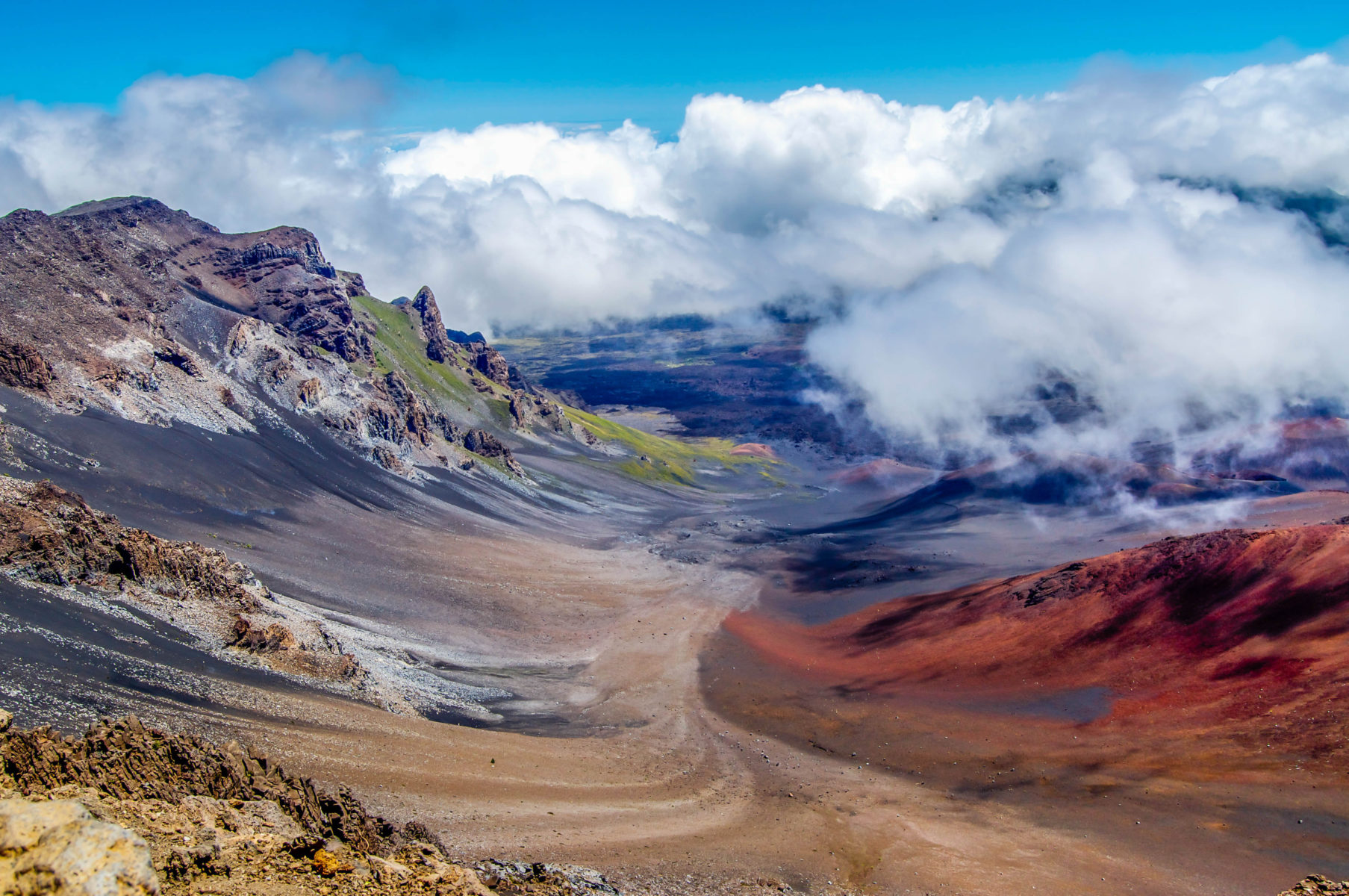 Fittingly, in full bloom, it looks like a futuristic pineapple: a ball of fleshy metallic tendrils from which a flowering stalk shoots skyward. It’s not hard to imagine Captain James T. Kirk munching on one in an episode of Star Trek. The silverswords you’ll see, however, are strictly off-limits. They are as rare a plant as they come — the subspecies on Maui reportedly only grows on Haleakalā and above an elevation of 1.3 miles.

The coolest way to have your own silversword encounter is to hike into the heart of the park’s wilderness area, a volcanic cinder desert that seems as though it could just as easily be Mars as it is Maui. A few miles from the nearest trailhead on the Halemau‘u Trail is a subtle detour called the Silversword Loop. This spot is home to one of the mountain’s most dense concentrations of the ethereal plant. No matter which main entry point you choose, the walk to the natural silversword garden is essentially all downhill. 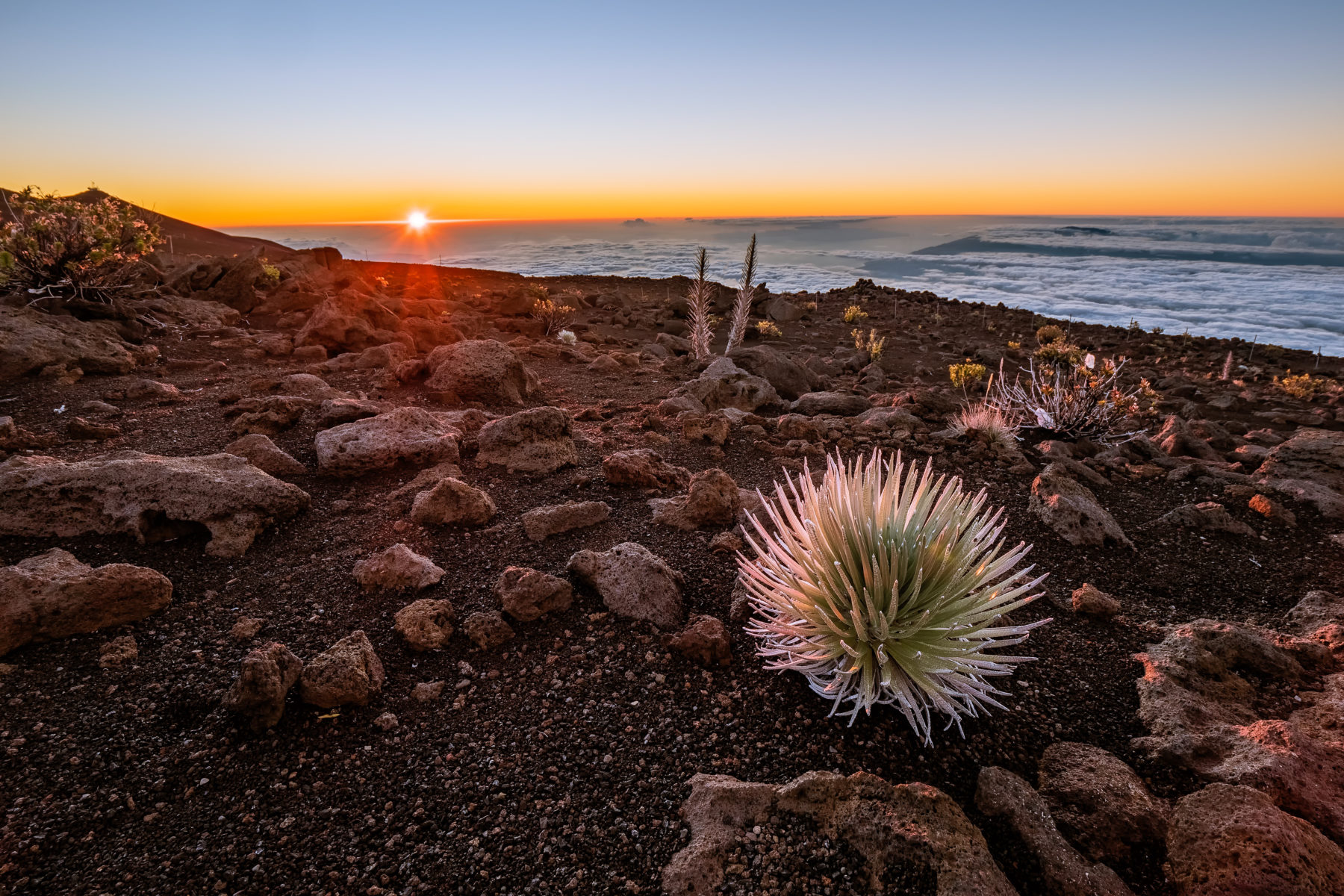 I will say this: the hike is worth it. The day we did it, we descended through a veil of wispy clouds that concealed Haleakalā’s stark interior, until we had nearly reached the floor.

Walking on, we looked up and saw a brilliant silversword. And then another, and then more. We didn’t crest a hill or come out from behind a big rock. They were just there. And discovering these singular Hawaiian plants in the middle of nowhere is special, like happening across a spider orchid in the jungle instead of seeing it at the local botanical gardens.

If an all-day trek isn’t part of your preferred vacation agenda, you can drive to within a few dozen feet of a couple different silversword collections. There’s a nice display at the Park Headquarters Visitor Center, and farther up the road, you’ll see specimens growing around the summit area.

Similar to seeing Haleakala’s silverswords (by whatever means suit you best), you must savor Ululani’s Hawaiian Shave Ice.

Another local phenomenon, shave ice defies a certain earthly logic. I had my first taste at a little shop on Kaua‘i — and was skeptical. Until I put a spoonful of the silky-smooth, raspberry-flavored goodness in my mouth. The key is the texture, and the only way to describe it is creamy. Yes, contrary to expectations, real shave ice has absolutely no crunch. I don’t know how they get the ice so paper-thin that it transforms into a velvety consistency, but that’s the trick. (And it seems as though it’s only truly possible in Hawai‘i; I’ve tried shave ice around the world, in places that claim to be “authentic,” and it’s never quite the same — or as delicious.) 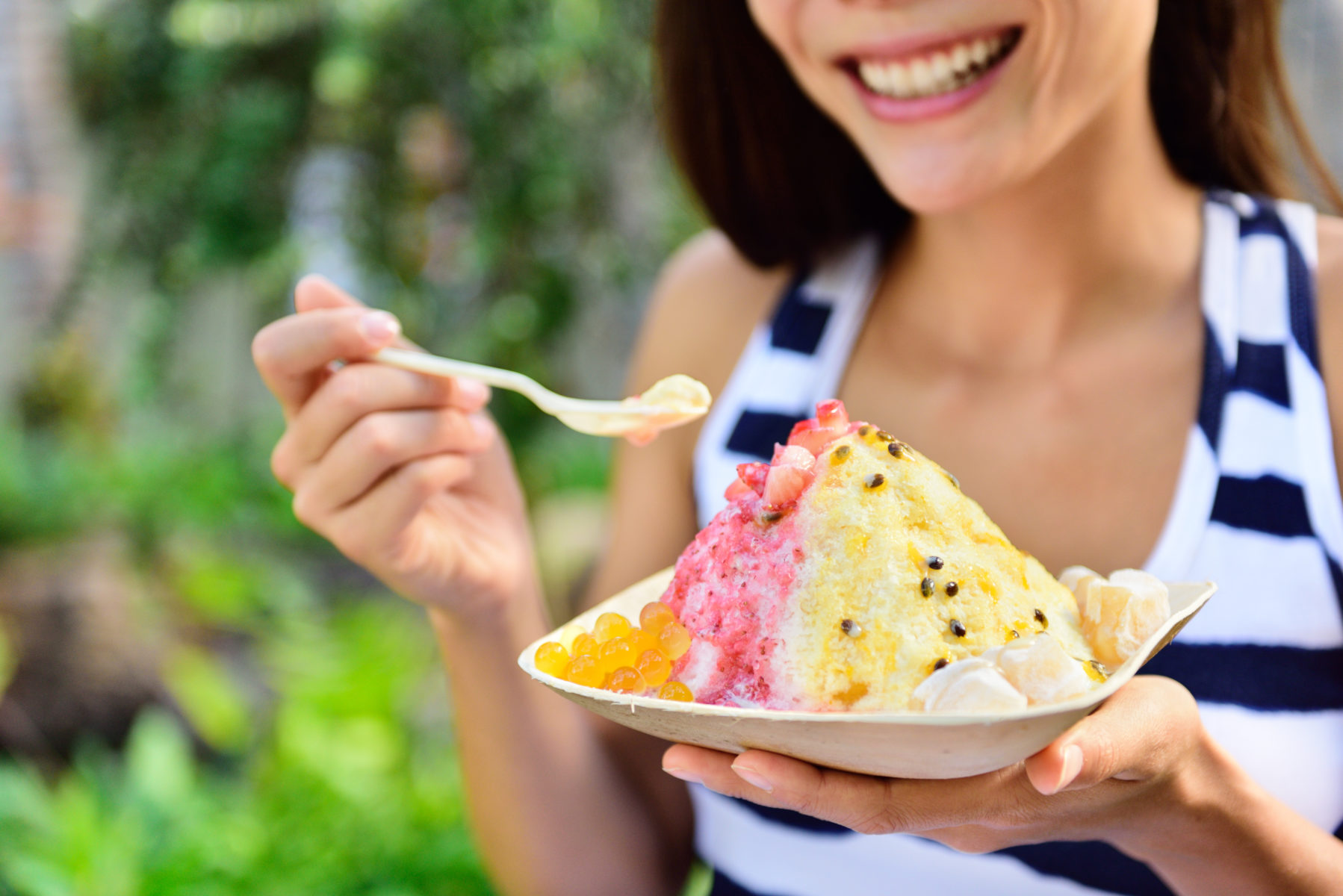 Since that first sample almost two decades ago, I’ve been back to each of the main Hawaiian Islands a handful of times, and can report without hesitation that my all-time favorite shave ice spot is Ululani’s on Maui. And thankfully, there are multiple locations around Maui so you’re never very far from your next serving.

There are endless taste combinations, so second helpings needn’t be repetitive. One day, I had a pineapple-orange blend in the morning, and then the afternoon sunshine seemed perfect for the popular Kā‘anapali mix, with grape, lime and cherry. One more note about flavors and ordering: When the smiling attendant asks if you want a scoop of ice cream plopped in the bottom of your cup, your answer should be”yes,” and vanilla. This confused me the first time — ice mixed with ice cream doesn’t sound right — but trust me, it’s the only way to go.

The Road to Hāna

I mentioned that you’re almost never too far from an Ululani’s on Maui. The exception is when you’re traveling the Road to Hāna, a stretch of narrow pavement that snakes along the island’s northeast shore, providing access to countless waterfalls and beaches and rainforest panoramas. In fact, if you close your eyes and imagine Maui, whatever tropical scene your subconscious wanderlust conjures up can probably be found somewhere on the Road to Hāna. 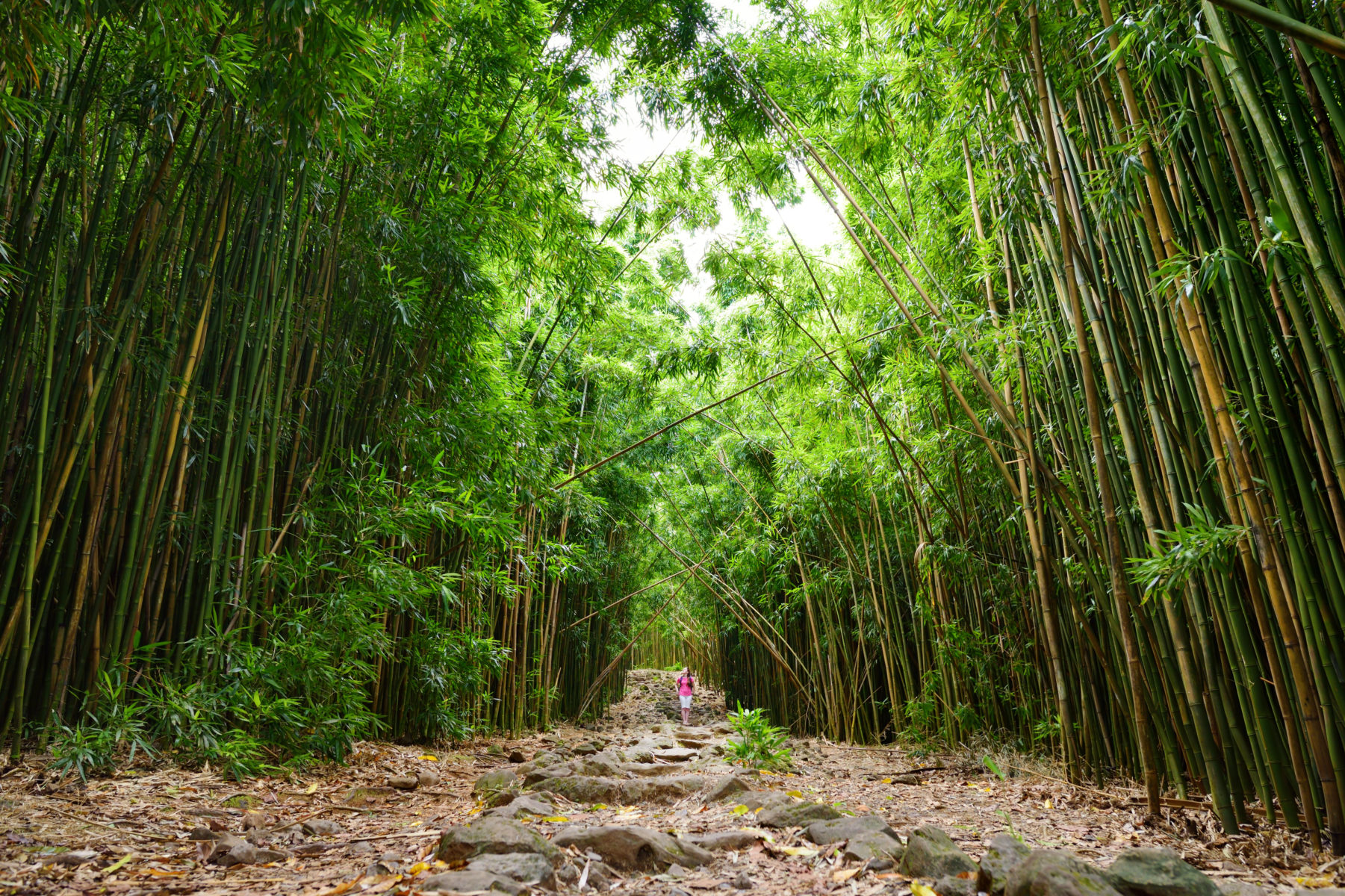 There are times on the Road to Hāna when you think you’re going to drive right into the jungle. Not because the highway fades into a lush horizon line of trees somewhere in the faraway distance, but because three directions of your immediate vicinity all are enclosed with those lush trees and it seems there’s simply nowhere else to go. Then the pavement veers abruptly left and an exit point, in the form of a hairpin turn (one of many scenic ones), is revealed.

The views from your car the whole way are amazing, but there are also numerous scenic stops: Twin Falls, Ho‘okipa Lookout, the Garden of Eden Arboretum, Honomanu Bay, the Nahiku Marketplace, the Hāna Lava Tube, Kahanu Garden and many more. These are the very places where the Maui of your imagination comes to life.

We stopped a couple of times, but mostly drove until we emerged from the rainforest for good at the tiny town of Hāna and made our way to Hāna Bay Beach Park for a refreshing dip in the ocean and a beachside picnic. We also walked through the Hasegawa General Store, the famous tin-roofed outpost that sells packaged snacks alongside equal parts Hawaiian trinkets (watercolor prints, music CDs, hula skirts, T-shirts) for the visitors and living necessities (paper towels, wood screws, spray paint, glue guns) for the residents. 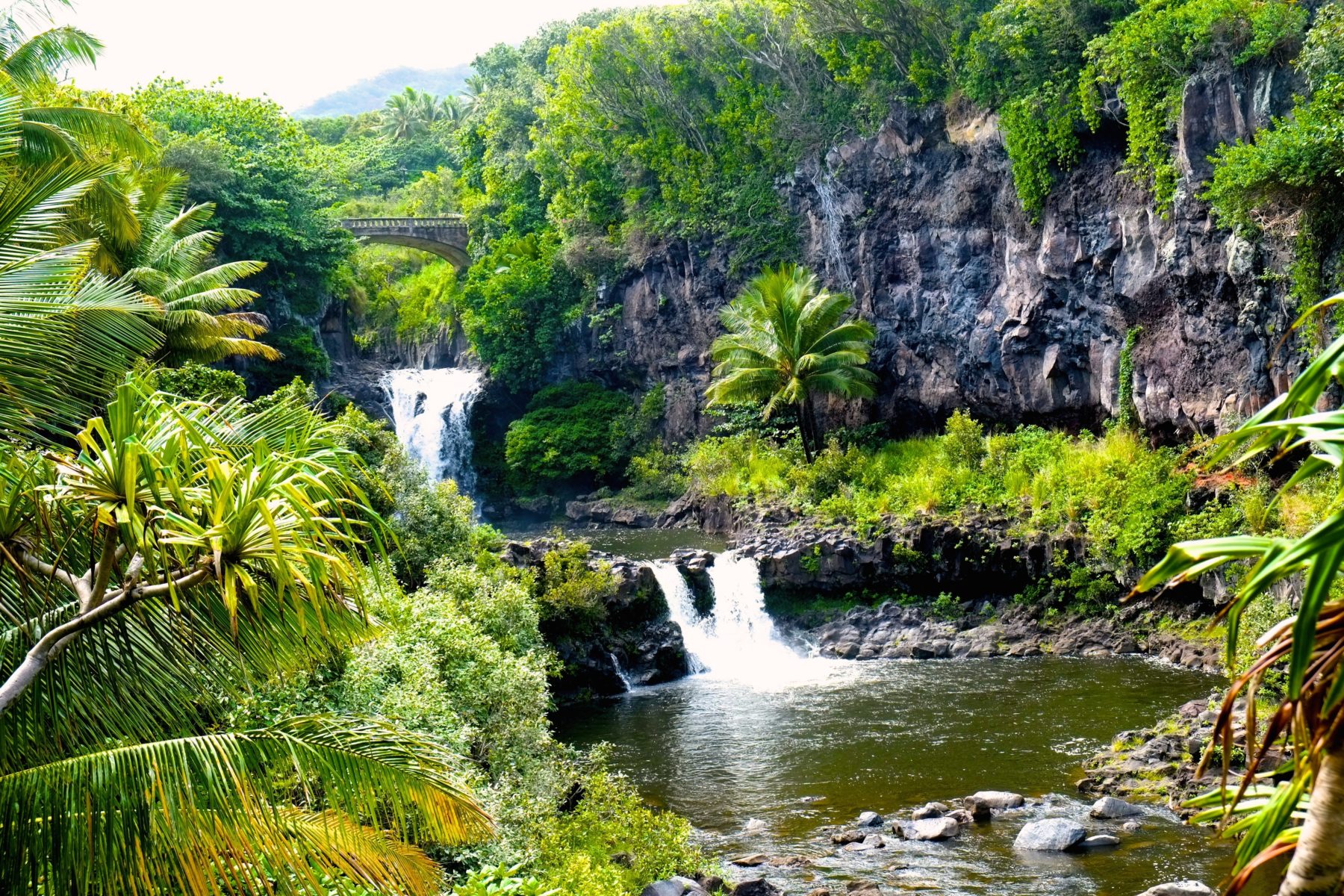 This is the final stop for a lot of people, but the road continues, and about 10 miles later, you’ll find the Pools of ‘Ohe‘o (also known as the Seven Sacred Pools), which, for the record, is precisely what my subconscious conjures up when I imagine Maui.

Interestingly, this is actually the backside of Haleakalā National Park, though it looks nothing like the volcanic crater where we spied the silverswords. ‘Ohe‘o is lush. And standing back and surveying the entire scene — the foliage overtaking the black-rock outcroppings, the multiple cascades plunging into the natural ponds, the mystery of what the jungle might be concealing beyond our view, is my favorite part — because it all seems so, well, out of this world.

This article originally appeared in Issue 2, 2017 of the North America edition of Interval World magazine, published by Interval International®, Inc., an indirect subsidiary of Marriott Vacations Worldwide Corporation. Any re-use of this content, or any portion of this content, is strictly prohibited. All rights reserved.