From sweet Málaga wine and spit-roasted sardines to more than 300 days of sunshine, all with a flamenco flourish, here’s a top-10 list of the charms of Spain’s Costa del Sol.

Start your visit in Málaga, the provincial capital — no longer just an airport destination. This birthplace of Pablo Picasso has transformed into a sleek cultural metropolis with a revitalized waterfront, a Soho arts district, and a film festival championed by local hero Antonio Banderas — pop into El Pimpi, his bar in Málaga’s Old Town, for terrific tapas and ambiente  (ambiance). After Málaga, make your way to the Costa del Sol’s quaint whitewashed villages. If you have time to visit just some of them, here are 10 quintessential experiences you simply can’t miss. 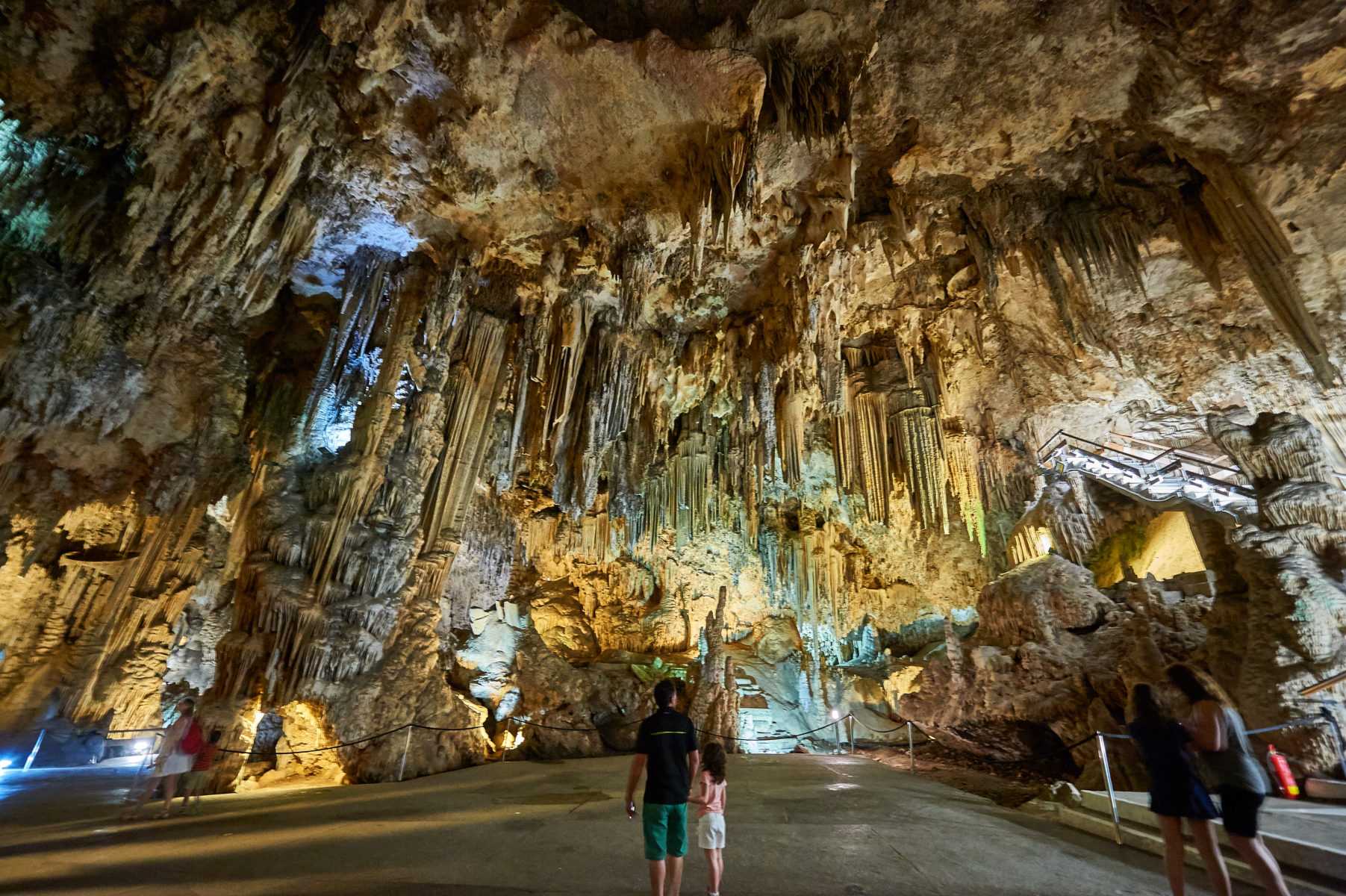 1. Go Underground into the Nerja Caves

It’s hard to bypass bustling Nerja, but its richest treasure is buried two miles east of the pretty Moorish seaside town, beneath the mountains of Maro: the Nerja Caves. A vast network of soaring cathedral caverns that were home to Stone Age man, these natural wonders were chiseled by the elements over millennia into fantastical forms evocative of Gaudí sculptures. The more-than-400-step underground trail winds through the Chamber of Ghosts with its spooky shadows, past a mighty Guinness World Record–holding stalagmite, into the Hall of the Waterfall or Ballet, named for its stalactite cascade. In June and July, this natural concert hall hosts a world-class festival of music and dance. And in the summer, you can have your caves and Nerja, too, when a cute red train shuttles between town and caverns, making pit stops at Nerja Museum and the Maro square.

2. Feast on Fish in the Seafood Mecca of Torremolinos

La Carihuela has been the home of pescaíto frito (fried fish) since Torremolinos was a humble fishing village — and is still the Costa del Sol’s most iconic seafood strip. The endless esplanade running all the way to Benalmádena is awash with beachfront restaurants tempting with the aroma of brine-fresh whitebait, crisp calamari, and anchovies sizzled in tempura batter. Casa Juan Los Mellizos, serving up divine fish dishes since 1963, is an old-time favorite. Or pull up a beach chair at a chiringuito (beach bar or restaurant), and dine with your toes in the sand. It’s the only way to try traditional espetos — silvery sardines spit-roasted on canes aboard beached bluefish boats. One taste and you’ll understand why this time-honored delicacy is up for UNESCO World Heritage status. 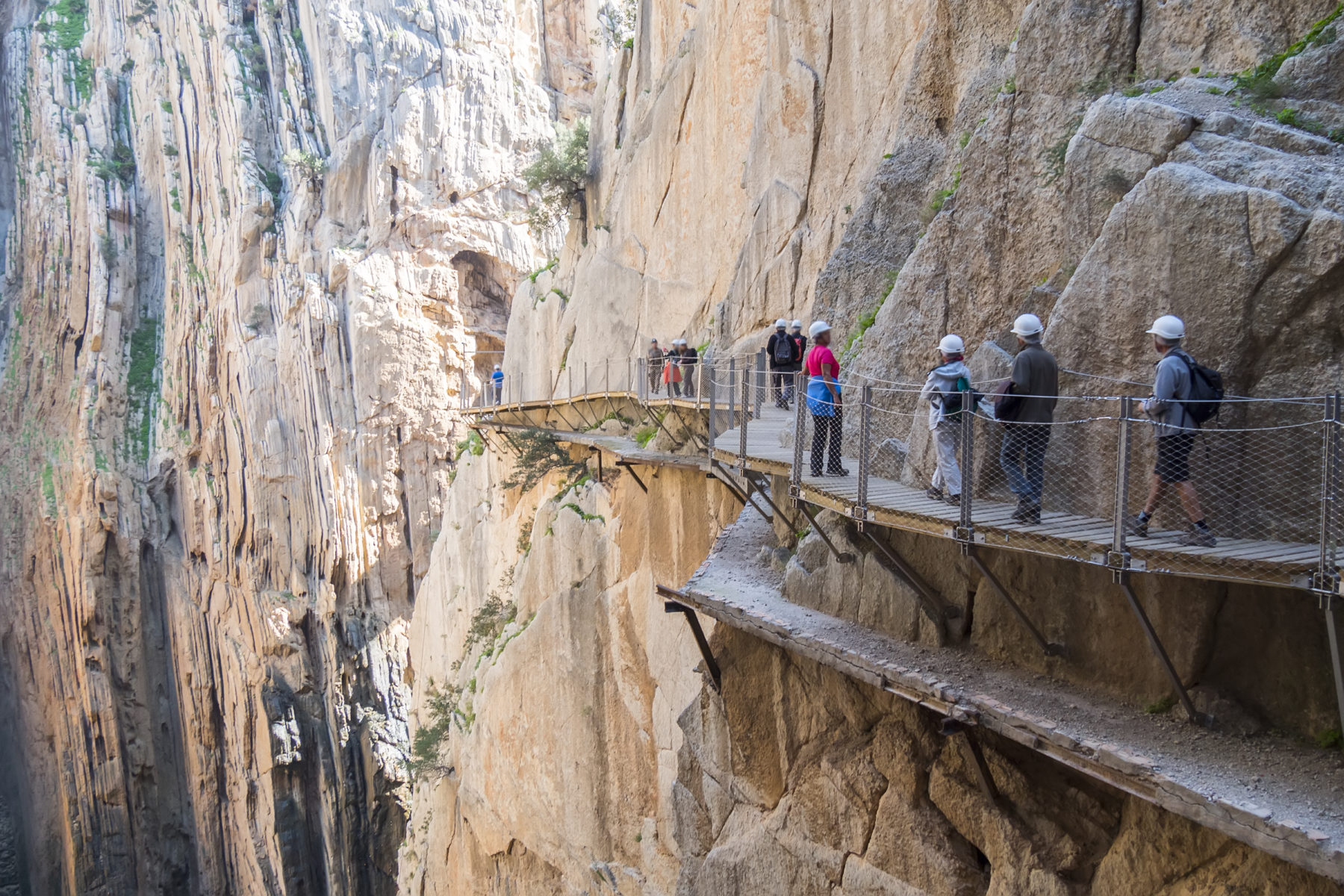 Dubbed “the world’s most dangerous walkway,” Caminito del Rey, or The King’s Little Pathway, is not for the faint of heart, but the views are worth it. The 3-foot-wide boardwalk in Málaga province is pinned to the side of a gargantuan gorge above a 328-foot drop to the river. Undaunted, several million adventurers have hiked the awe-inspiring, 1.8-mile mountain-pass trail since its 2015 restoration. Built in 1921 to connect two hydroelectric stations, and personally tested by King Alfonso XIII, today it features spectacular glass-floor sections, a hanging bridge, and a 984-foot tunnel, dimly lit in deference to the resident bats. The full 4.7-mile linear route through jaw-dropping scenery takes three to four hours to complete, with a return shuttle bus from Ardales or El Chorro, about an hour northwest of Málaga city. Reserve your time slot online — and don’t look down! 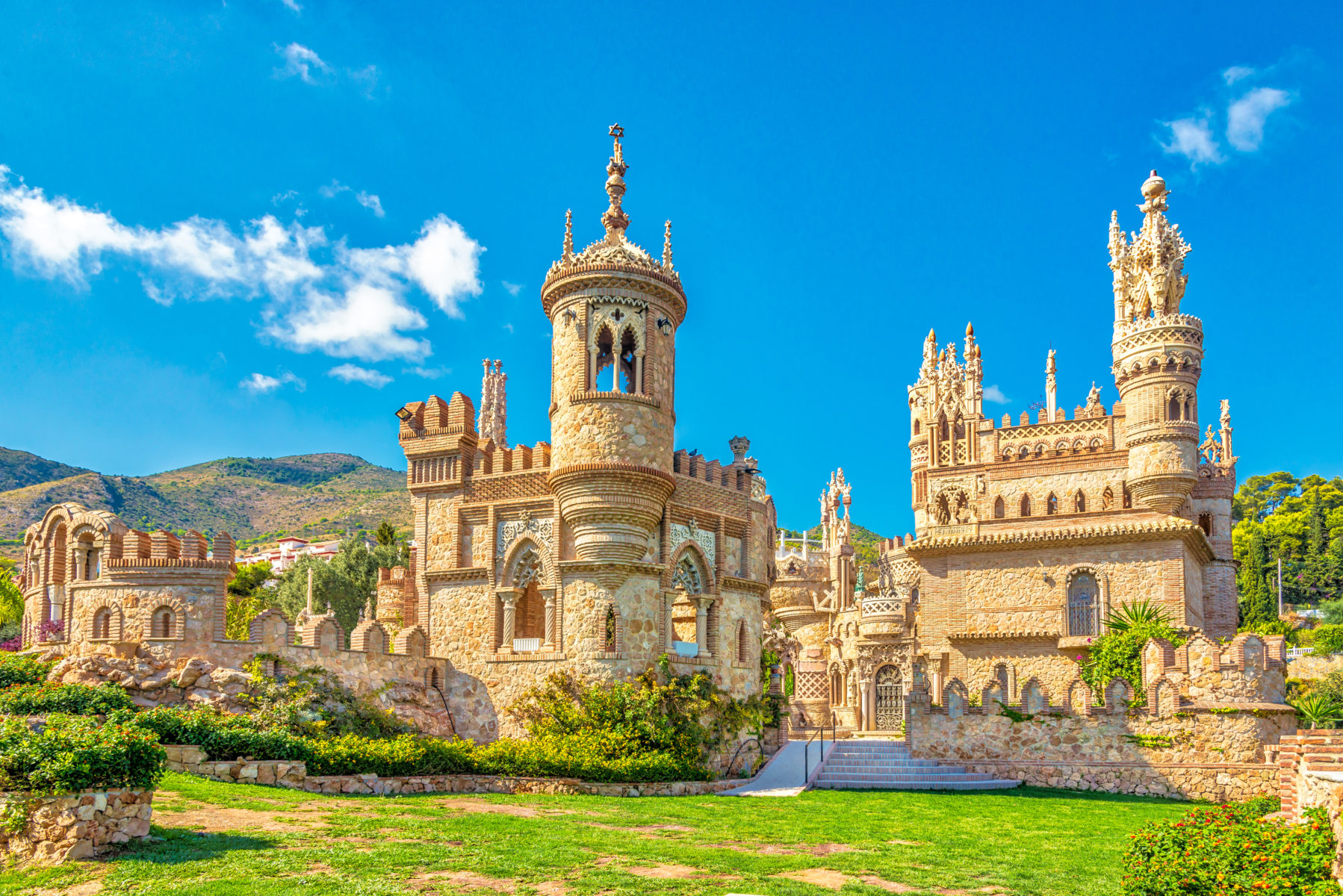 4. Push The Boat out at Puerto Marina in Benalmádena

Voted Best Marina in the World twice over, this party puerto (port) is an architectural marvel of Moorish minarets, canals, and Oriental-style bridges linked to floating islands topped with dome buildings that resemble a soft-serve ice cream swirl. Shops, bars, and eateries of all ethnicities are clustered along the quayside, and the seafood is amazing. From the terrace at El Mero Los Mellizos, inches above the water, you can feed the fish as well as your belly. Then, try wakeboarding and game fishing, feed stingrays and go face to face with sharks at the Sea Life Benalmádena aquarium, shiver in an ice bar, and stay past sunset — this insomniac port goes full steam until the morning hours. For an extra-nautical experience, take the daily ferry from Málaga or Fuengirola. And look out for Antonio Banderas, who keeps a yacht or two docked at the marina.

While donkey taxis have been toting tourists up and down the steep cobbled streets of this picturesque village for half a century, a new and less burdensome mode of transport more familiar to the streets of Bangkok has zipped into town: tuk-tuks. Not the noisy, fume-belching rickshaws of Far East infamy, but silent, electric, chauffeur-driven eco-transport. A 35-minute tour whizzes visitors up the jigsaw-puzzle streets for panoramic views of the coast, past many boutique charms: Spain’s smallest bullring, tiniest chocolate factory, and a museum of miniatures. It’s the way to go in this go-ahead village, where the police ride Segways. 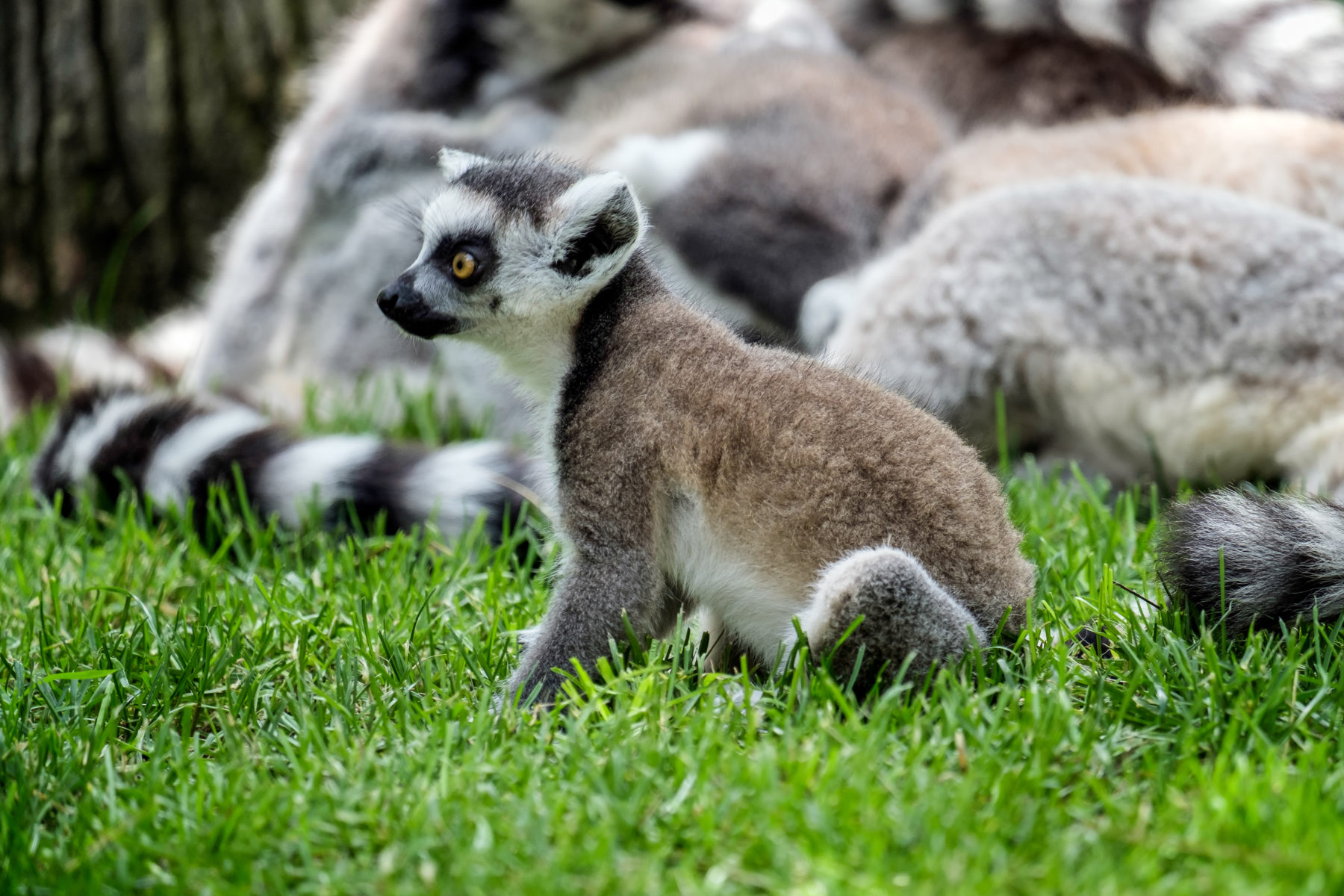 You could lose yourself for hours wandering this lush, tiger-prowled rain forest sprouting in the heart of downtown Fuengirola. Cageless habitats simulating the ecosystems of equatorial Africa, Madagascar, Southeast Asia, and the Indo-Pacific allow multiple species to coexist as nature intended at this very alternative zoo. Monkeys chatter in the jungle canopy, reptiles slither along the forest floor, piranhas lurk in a mangrove swamp, and lemurs cavort in the branches of a giant baobab tree. The park’s award-winning captive breeding program helps out more exotic residents like the vulnerable Komodo dragon and critically endangered lowland gorilla. In July and August, it’s open for nocturnal visits, when simulated moonlight allows visitors to spy on leopards, flying foxes, and other creatures of the night.

With its posh marble promenade, swanky waterfront bars, and elephant-statue showers jetting water from their trunks, Marbella’s beach life is as glitzy as its reputation. In the summer, the action pivots between seaside siestas on decadent white-curtained daybeds and Champagne parties at world-famous beach clubs. But a stroll along the Golden Mile — named for its millionaires’ row of beach villas — is always in season. A new suspension footbridge has extended this sporty fashion catwalk into a nearly 5-mile waterfront workout stretching from town to jet-setty Puerto Banús, with plenty of places to stop for refreshments and celebrity spotting. Put on your best designer sneakers and prime yourself with a café con leche (scalded milk with strong coffee) beside tropical Alameda Park, then begin with a walk down Avenida del Mar’s striking boulevard of Dalí sculptures. 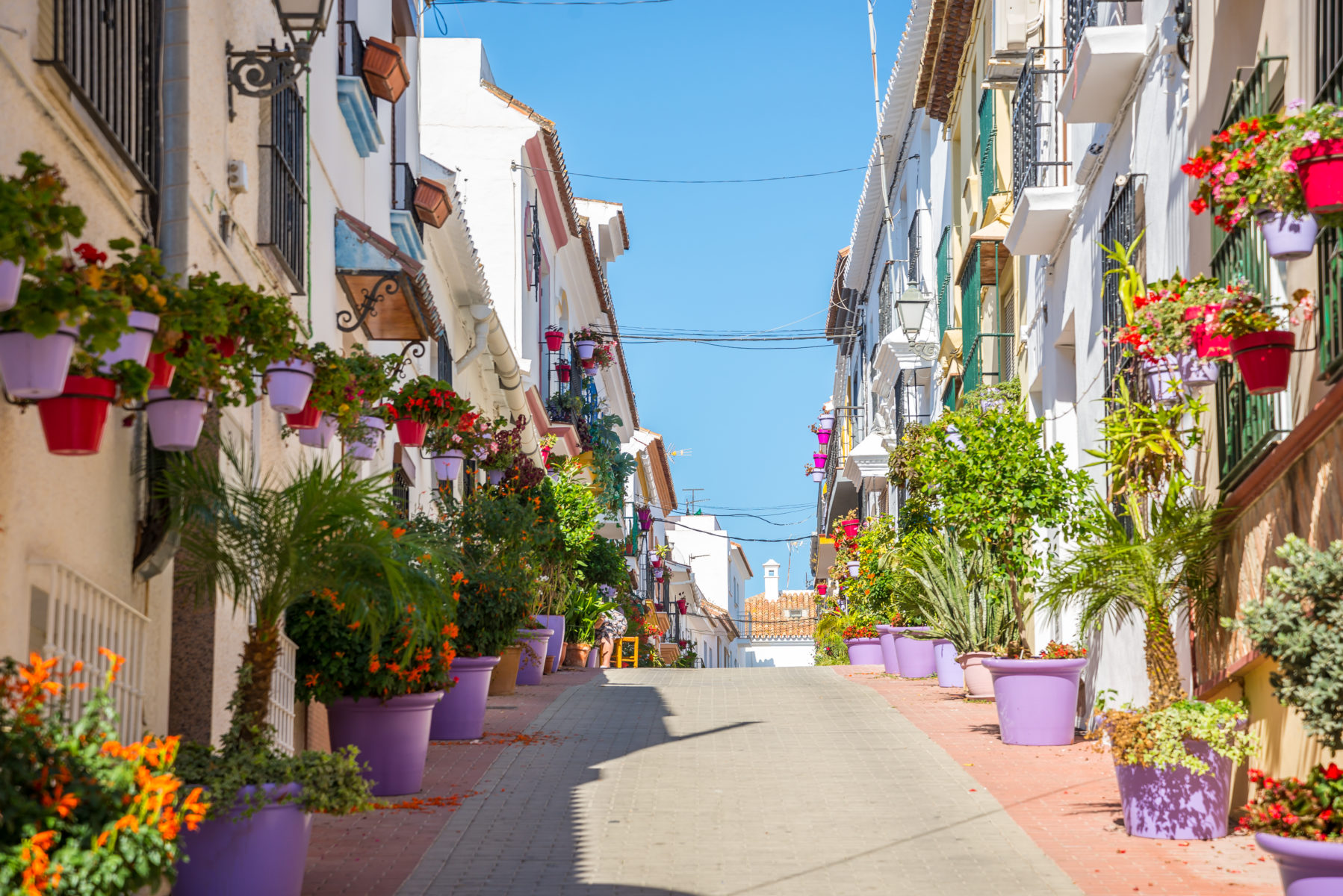 8. Say It With Flowers in Estepona

Take a stroll along the esplanades of Estepona and you’ll soon see why this seaside village is known as the Garden of the Costa. Some 20,000 painted and polka-dotted geranium planters adorn 100 of the Old Town’s cobblestone alleys with a kaleidoscope of color. A profusion of seafront flower beds adds to the aromatic overload, and a triple-domed orchidarium with an indoor waterfall shelters 1,500 exotic blooms. The botanical binge would inspire anyone to wax lyrical, but that’s already been thought of. Busts of famous wordsmiths and plaques inscribed with their poetry decorate Estepona’s picturesque plazas, while the walls of tall buildings flaunt 50 jaw-dropping, Banksy-style murals.

9. Unwind at a Roman Spa in Casares Costa

Enjoy a rejuvenating spa treatment in the open countryside, as recommended by Julius Caesar. Hidden along a dirt track 10 minutes inland from Casares Costa are the Roman Baths of Hedionda. Said to have cured Caesar’s dermatitis while he was governor in these parts, a dip in the sulphur springs will leave your skin glowing — just be sure to bring your own towel. Modern handrails aid descent into the milky-blue waters where you can swim beneath the stone arches of four of the original bathing chambers, and out to the river to slather yourself in mineral-rich mud. Entry is free, but this surreal oasis is always popular, and from July to the first half of September, there is a maximum of 24 visitors permitted per hour. So be sure to reserve your tickets, which can be obtained on-site or online in advance. 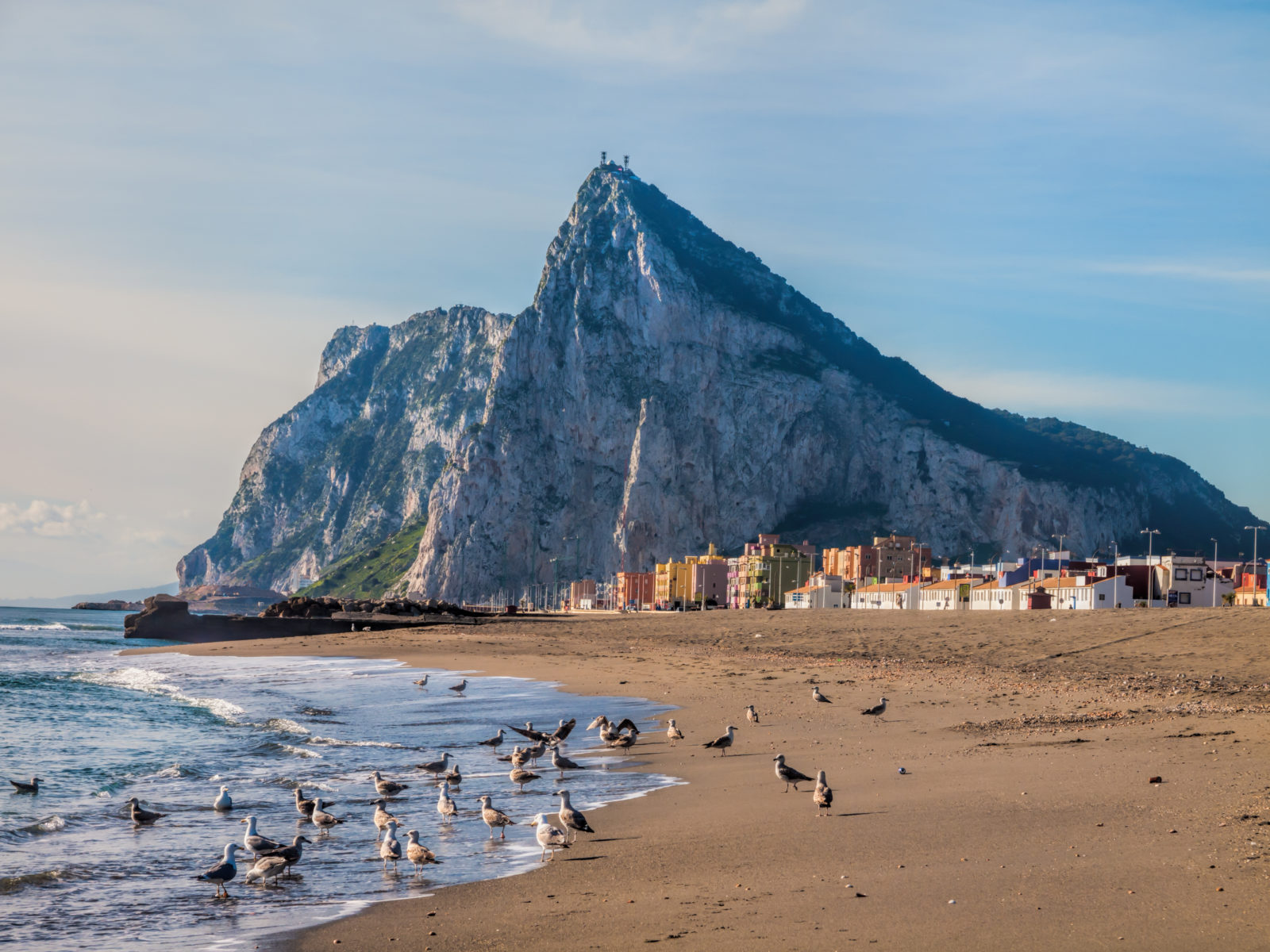 10. Take Gibraltar from the Top

It’s not the Costa del Sol (nor even Spain, technically), but for truly otherworldly views, don’t overlook the Rock of Gibraltar — located less than a 45-minute drive southwest from Casares Costa. The British territory’s craggy summit will reward you with a giddy two-continent panorama where Europe meets Africa across the sparkling Strait of Gibraltar. At the Upper Rock Nature Reserve, you can see the famous tailless monkeys, walk a suspension bridge straddling a 164-foot gorge, and step into the void on a glass sky walk. The cable car ride up The Rock adds to the highs, or, if you’re up for the challenge, take the Mediterranean Steps — the nearly mile-long trail to the top.

This article originally appeared in Issue 2, 2019 of the North America edition of Interval World magazine, published by Interval International®, an indirect subsidiary of Marriott Vacations Worldwide. Any re-use of this content, or any portion of this content, is strictly prohibited. All rights reserved.