The idyllic Thai island of Phuket is the perfect springboard for adventures beyond the ordinary.

Nestled along temperate waters, Phuket is justifiably famous for its sugar-white sands, world-class hospitality and excellent opportunities for sailing, golfing and snorkeling. It’s the largest and one of the most visited of the many beautiful islands that dot the Andaman Sea.

With all of this picturesque scenery in close proximity, you might not consider going too far beyond the beaches. But Phuket is also a great jumping-off point to unique sites and activities, with a wide range of excursions and tours catering to all budgets. Here are five not-to-be-missed experiences. 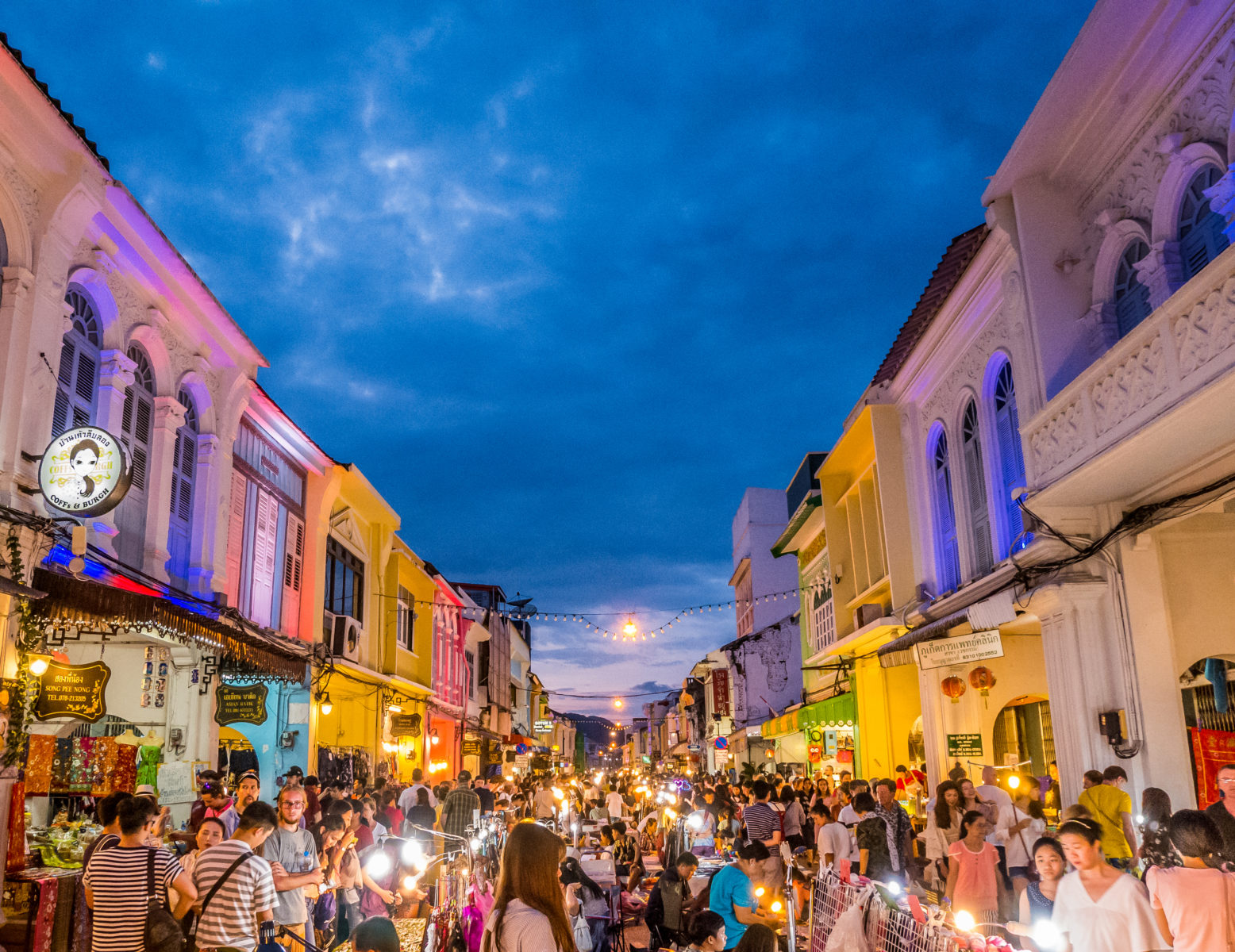 Although relatively far from the main beaches, Phuket Town is well worth visiting. In the 19th century, tin was Phuket’s most valuable resource, and Chinese immigrant laborers settled on the island in huge numbers. The island’s interior became almost exclusively Chinese, while the coastal areas were dominated by indigenous Muslim fishermen. Today, the Chinese influence is still strong, and Phuket Town is distinguished by its fine Sino-Portuguese architecture with elegant colonnaded streets. As the province’s administrative capital, it is the picture of historical prosperity. Colonial-style mansions and shophouses are interspersed with ornate Chinese shrines that are suffused with incense and the gentle murmurs of incantation and prayer.

If you are visiting Phuket in late September or early October, you may be in time for the annual Vegetarian Festival, held in the ninth lunar month of the Chinese calendar. For nine days, Phuket Town is transformed into a spectacle of parading residents who engage in amazing feats of asceticism, self-piercing and fire walking. As is customary, many devotees abstain from eating meat during this time, and some are even said to receive visits from the Chinese gods. 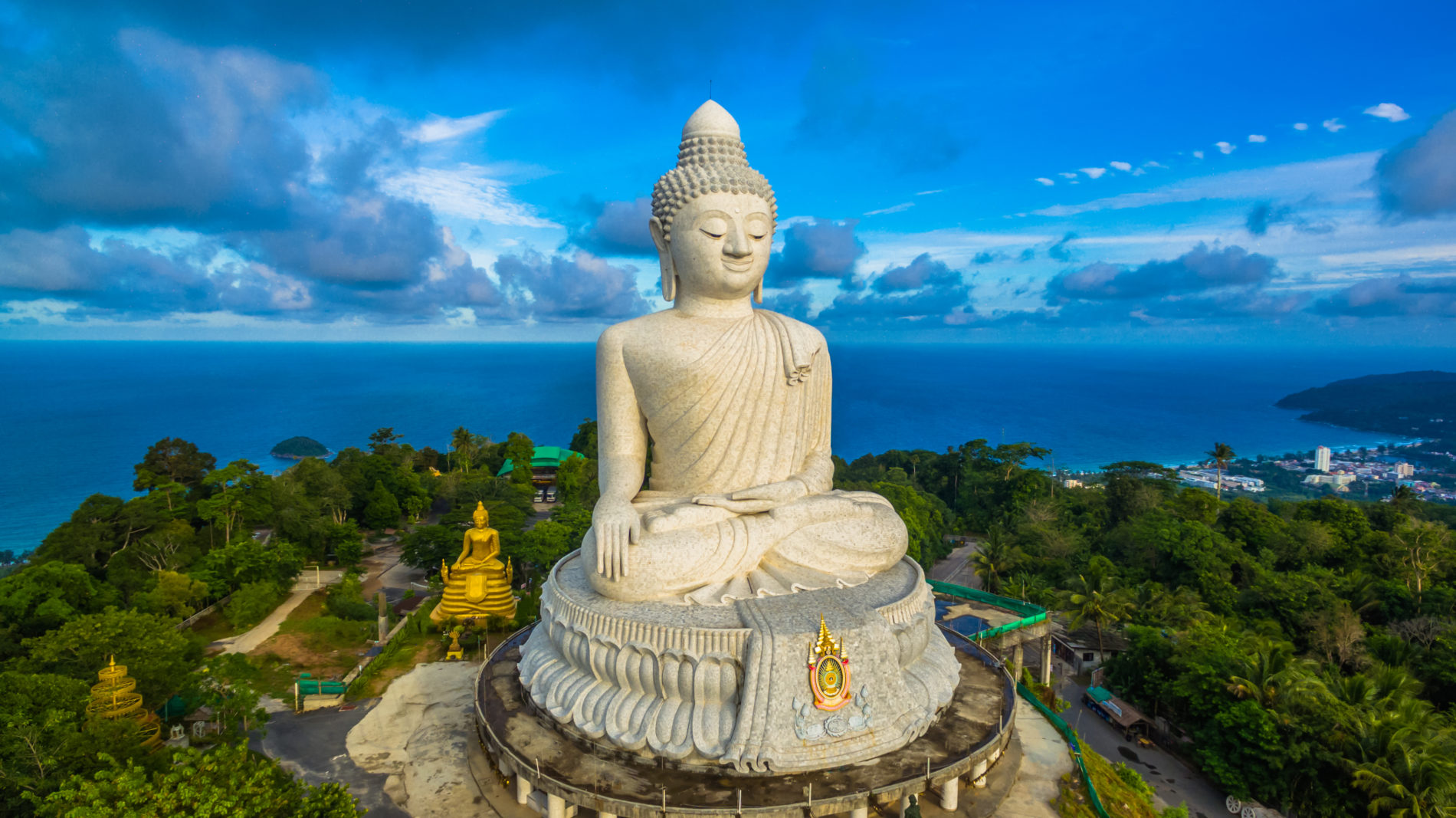 A very different religious experience can be found on the ridge atop Nakkerd Hills, between Chalong Bay and Kata Beach on the island’s southwest coast. There sits what is known among Thais as Phra Puttamingmongkol Akenakkiri Buddha, or Big Buddha. Covered with white Burmese marble that glimmers in the sunshine, this lofty 150-foot-high and 80-foot-wide statue, along with its surroundings, is a place of contemplation and worship. Beyond this extraordinary edifice are sweeping views of the terrain and the sea below — some of the finest panoramas on the island.

Another striking viewpoint is nearby Promthep Cape, situated at the far southern tip of the island. From here, you can look south to the ancient maritime trading routes with India and faraway Portugal. Also visible are the Koh Phi Phi islands, Koh Racha Yai and Koh Racha Noi. The cape is a wonderful spot to watch the sunset. 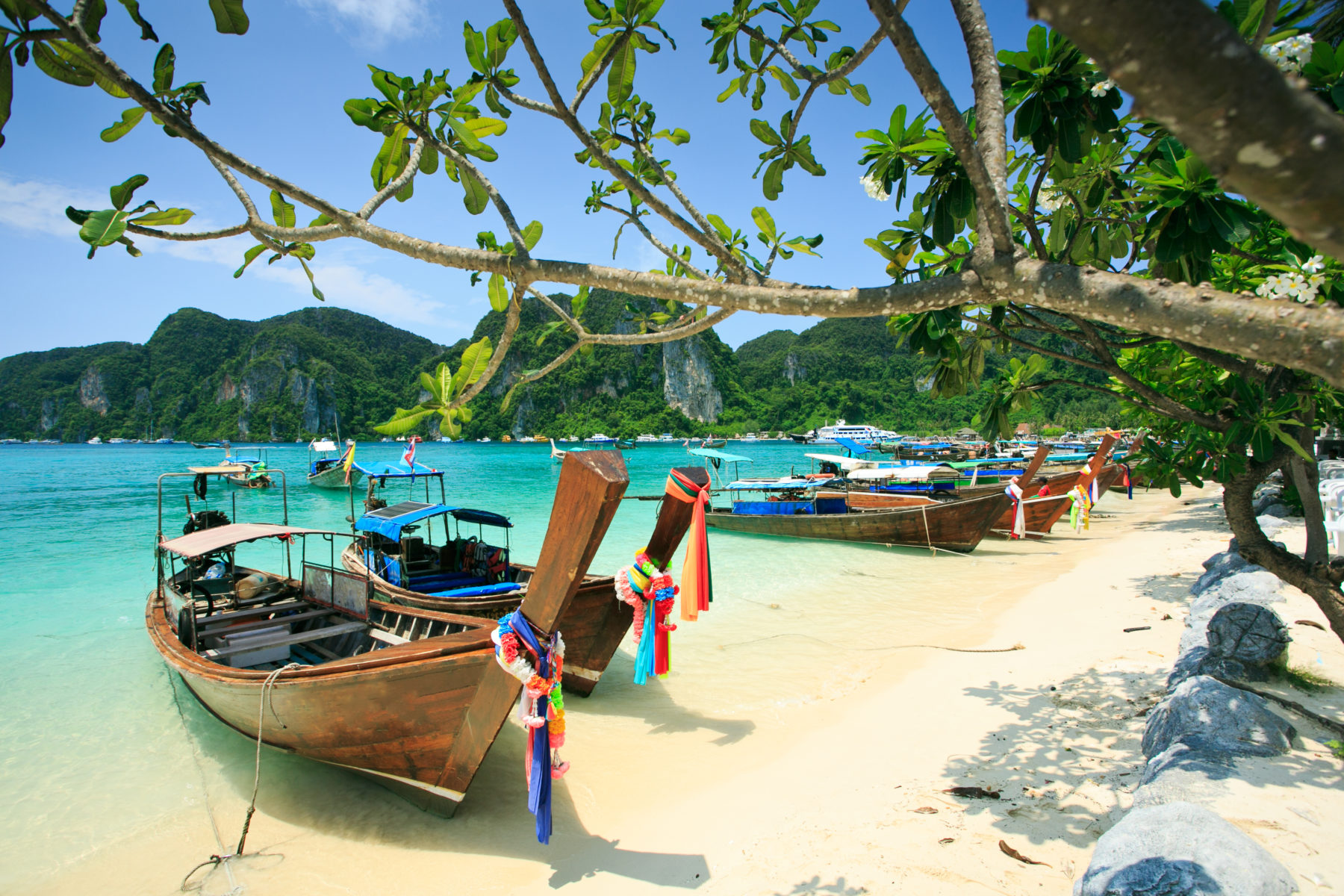 Only eight degrees from the equator, the waters are warm and the marine life is varied and plentiful around the islands of Koh Phi Phi. Less than an hour’s boat ride from Phuket, Koh Phi Phi is home to one of the world’s most abundant reef systems. Here snorkelers are treated to an astonishing array of coral and gloriously multicolored sea creatures teeming in exceptionally clear waters — butterfly fish, cuttlefish, clownfish, angelfish, harlequin shrimp, frogfish, octopi, seahorses, hawksbill turtles and, farther out, even leopard sharks and blacktip reef sharks. The snorkeling is nothing short of spectacular, as well as easily accessible, even to those with little experience.

Protected on three sides by 325-foot-high limestone cliffs, Maya Bay is famous as the location where many scenes from the film “The Beach,” starring Leonardo DiCaprio, were shot. Inside the bay are several small white sand beaches, some only appearing at low tide. Around the northern cliff reef near the entrance of the bay, large boulders have fallen down over the years, creating a labyrinth of stunning habitats from which schools of fish emerge. 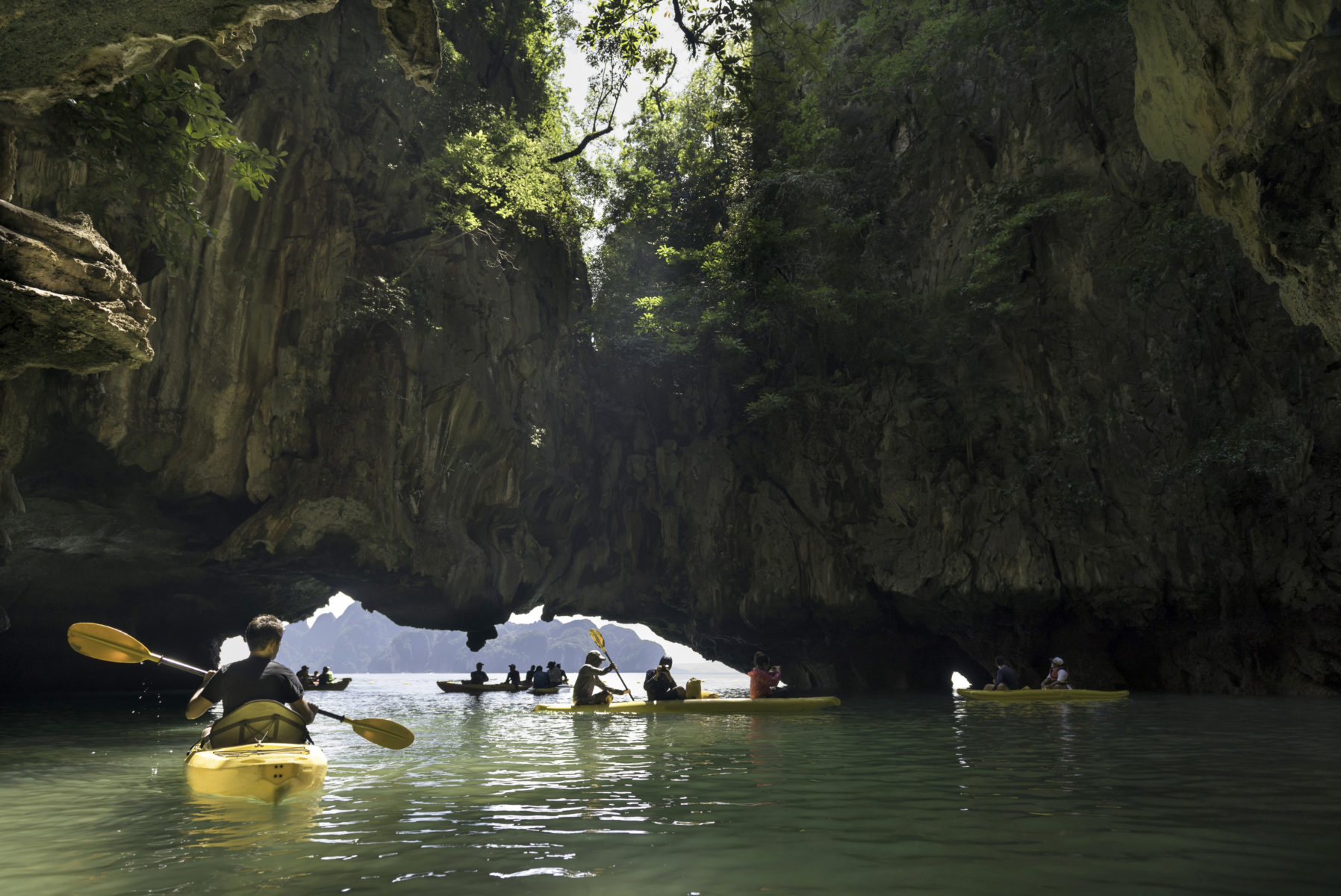 Ao Phang Nga is one of the most spectacular locations in all of Southeast Asia. A large portion of this iridescent bay is national park. Spread out over more than 150 miles of turquoise sea and countless limestone karst islands, it lies northeast of Phuket. Formed in an array of shapes, its islands were created millions of years ago, and some peaks are as high as 1,300 feet.

Koh Tapu is the most well-known; tapu translates to nail or spike, which reflects its curious shape. Now known far and wide as James Bond Island, it became famous internationally after it was featured as a location in “The Man With the Golden Gun.”

Within many of the Phang Nga islands are hongs, collapsed caves that are best explored by canoe. Filled with jungle flora and open to the heavens, they host a unique ecosystem. After the rains, the hongs often take on an air of surreal, ethereal beauty as cave interiors and stalactites glisten. Negotiating these vaulted chambers is best done with an experienced guide since access is often dictated by the tides. 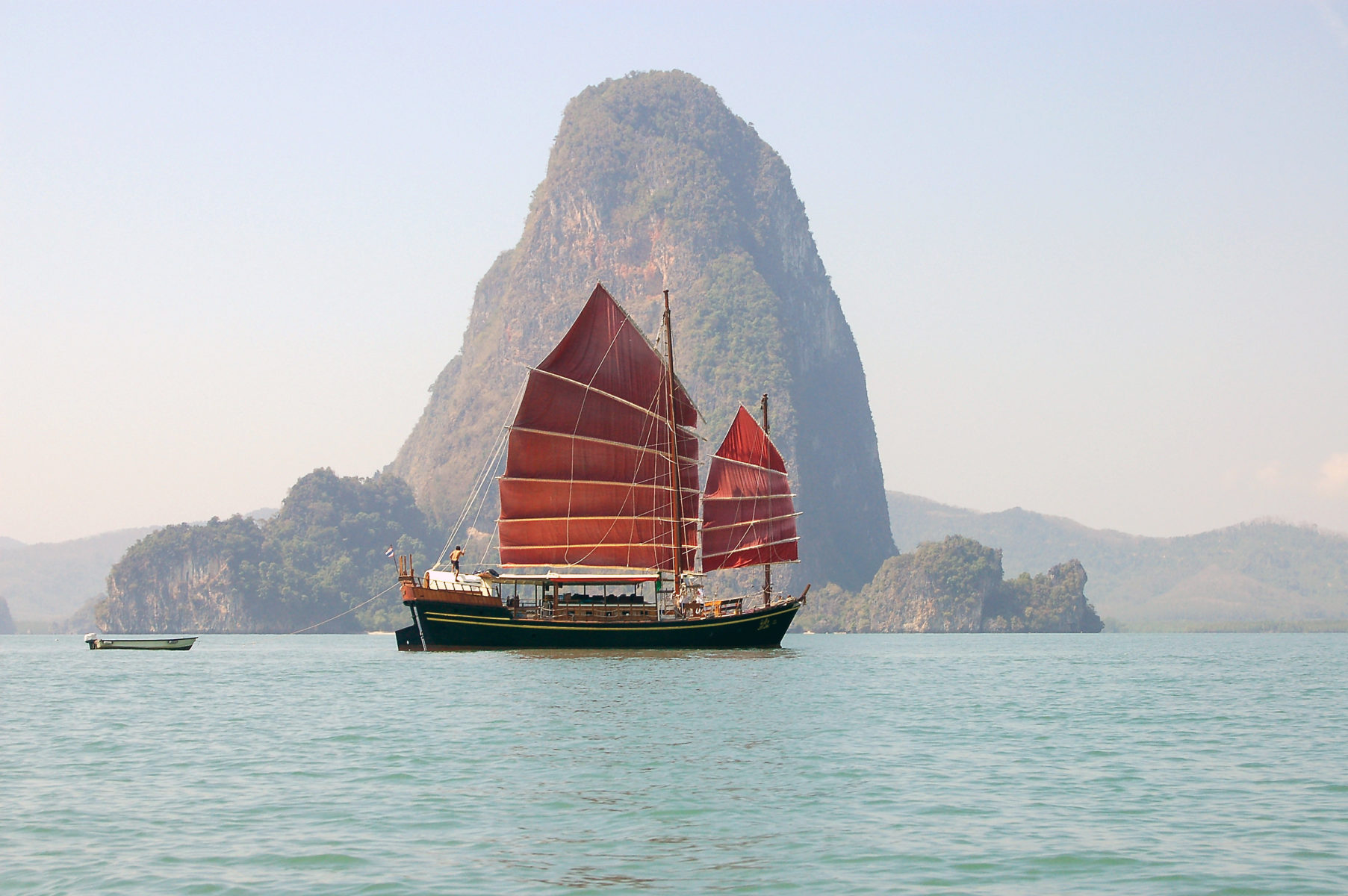 Phuket is famous throughout the world for the single-minded pursuit of relaxation. One of the most popular local spa treatments, Thai massage takes its cue from ancient Indian Ayurvedic teachings that date back to the time of Buddha and his physician. In the southeast, about six miles from Phuket Town, Sukko Spa offers not only massage administered by experts, but also an entire range of cultural activities — Ashtanga yoga from India, Muay Thai Chaiya (an early form of Thai martial art), Thai cooking classes and traditional mystical tattooing, sak yant.

One of the nicest ways to finish off your sightseeing is to take a sunset cruise. You can travel in the direction of Ao Phang Nga or Koh Phi Phi either in a junk, a traditional Chinese sailboat, or on a state-of-the-art motorboat. Enjoy a snorkel followed by cocktails, dinner and a dramatic view of the sky as the fiery sun falls below the horizon.

This content is excerpted from an article originally appeared in the Spring 2013 of the North America edition of Interval World magazine, published by Interval International®, an indirect subsidiary of Marriott Vacations Worldwide. Any re-use of this content, or any portion of this content, is strictly prohibited. All rights reserved.