Breckenridge’s modern-day mother lode isn’t found in dark mountain tunnels or roaring rivers. It falls from the sky in the form of light, fluffy snow — some 300 inches or so per year.

Indeed, the majority of intrepid travelers who make their way across the plains and into the high country these days do so for the world-class skiing and snowboarding. The Breckenridge ski season typically kicks off in mid-November, and once it’s in full swing, the Breckenridge resort area becomes a winter wonderland with 187 runs spread out across 2,908 acres and five mountains (peaks 6, 7, 8, 9, and 10 from the aforementioned Tenmile Range). So grab your Breckenridge trail map and find the run that is right for you! 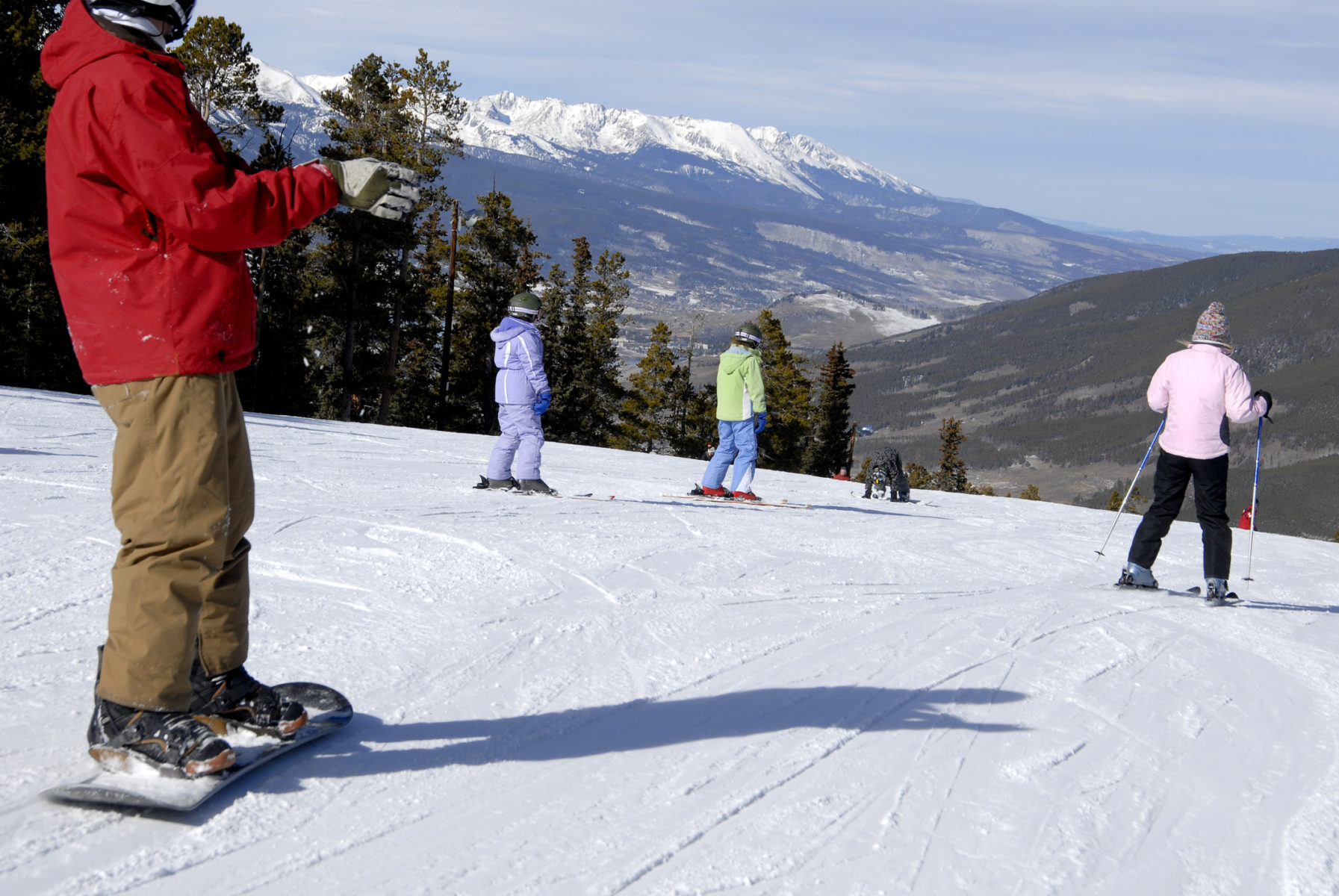 Whether you’re brand new to the sport or feel as though some more practice would be a good idea — you might want to consider enrolling in a day or two of Breckenridge ski lessons. Options include age-specific children’s classes for 3-year-olds and up, adult tutorials, family sessions, and women’s-only programs. After you’ve mastered your “pizza” and “French fries” turns, head to wide-open, easy-going green runs such as Springmeier on Peak 8 or Lower Lehman, Frontier, and Silverthorne off of Peak 9’s Quicksilver SuperChair.

While the bottom portion of Peak 9 is about as good as it gets for beginning skiers and snowboarders, the backside of the mountain is a secret stash for advanced riders. Over the past few years, the ski management team at Breckenridge has worked diligently to open new and more expert terrain. The majority of this is found in bowls and chutes above the tree line on peaks 6, 7, and 8. Some of it is hike-to only, and some is accessible after a quick ride on the Imperial Express SuperChair, which was installed in 2005 and remains the highest chairlift in North America. 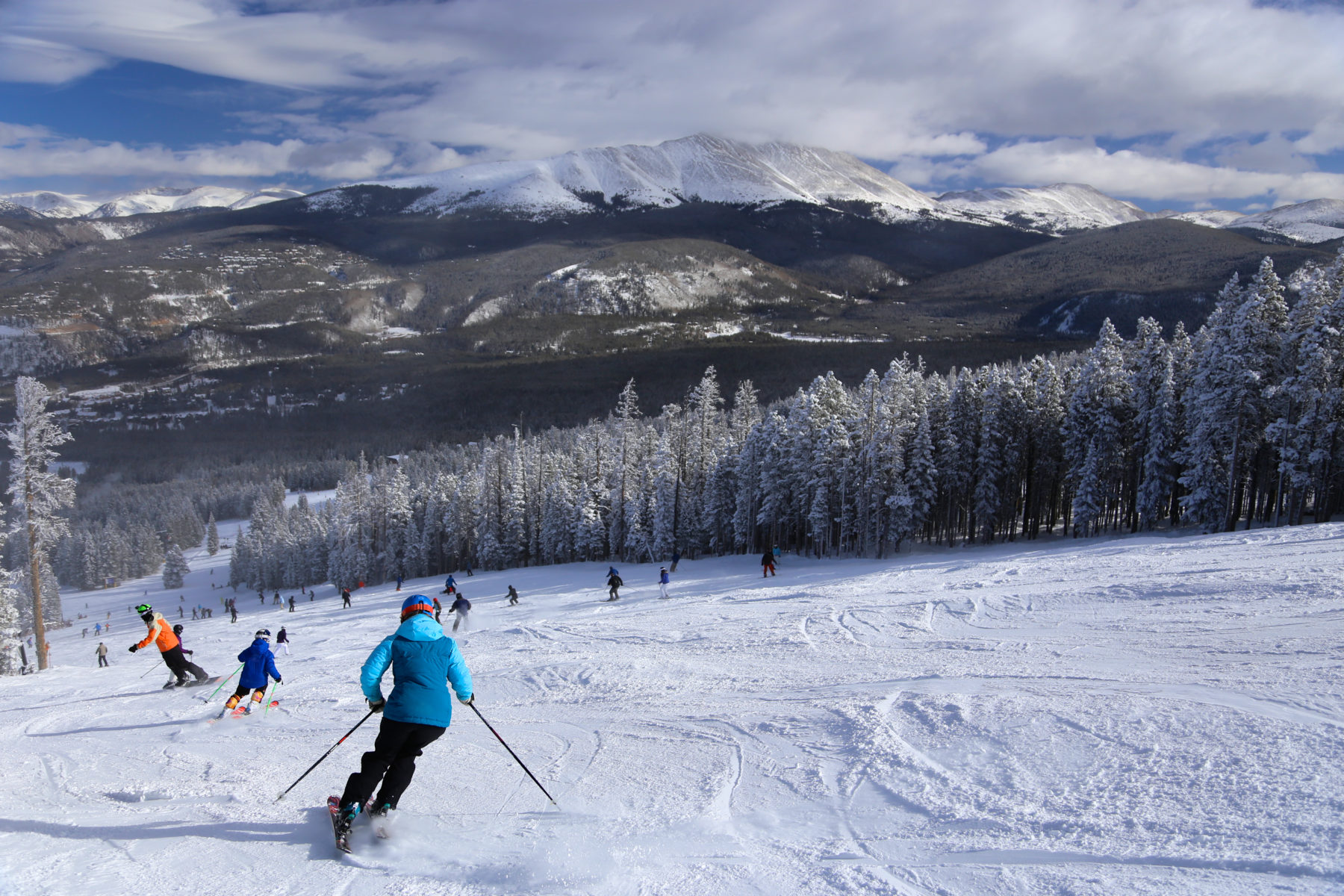 Off the Beaten Path

The backside of Peak 9, however, is old territory and seems to have been nearly forgotten by most Breckenridge visitors. But veteran skiers and snowboarders continue to make their way up the Mercury SuperChair and then a skier’s left to the ridgeline where trails with ominous names, such as Inferno, Hades, and Mine Shaft, begin. The runs are tight and steep, and are often embellished with moguls big enough to play hide-and-seek behind. When you get to the bottom, simply hop on the E-Chair and it will transport you right back to the top.

And if you find yourself wanting something between the slow-going Lower Lehman and rush-of-adrenaline Inferno, don’t worry — about 31 percent of Breckenridge is dedicated to intermediate runs. Some of the most fun are the gentle rolling slopes on Peak 7, such as Monte Cristo and Claimjumper.

Whether you’re a skier or simply enjoy taking in the views, hitch a ride on the Breckenridge Gondola. With 121 fully enclosed cabins, this popular free attraction transports riders to the top of Peak 8.

This article originally appeared in Issue 2, 2018, of the North America edition of Interval World magazine, published by Interval International, Inc., an indirect subsidiary of Marriott Vacations Worldwide Corporation. Any re-use of this content, or any portion of this content, is strictly prohibited. All rights reserved.