You’re probably familiar with the famous vistas of San Francisco –– from the iconic Golden Gate Bridge to the Painted Ladies of Postcard Row. But to fully know the city, you must immerse yourself in the unique neighborhoods and rich heritage of this diverse metropolis.

Northern California artist Bryan Valenzuela’s work is much the same, offering a picturesque view from a distance while providing a richer perspective up close. Valenzuela has spent more than a decade perfecting his trademark drawing technique: he uses handwritten text to carve shape and light, creating intricate imagery that tells visual and verbal stories simultaneously. 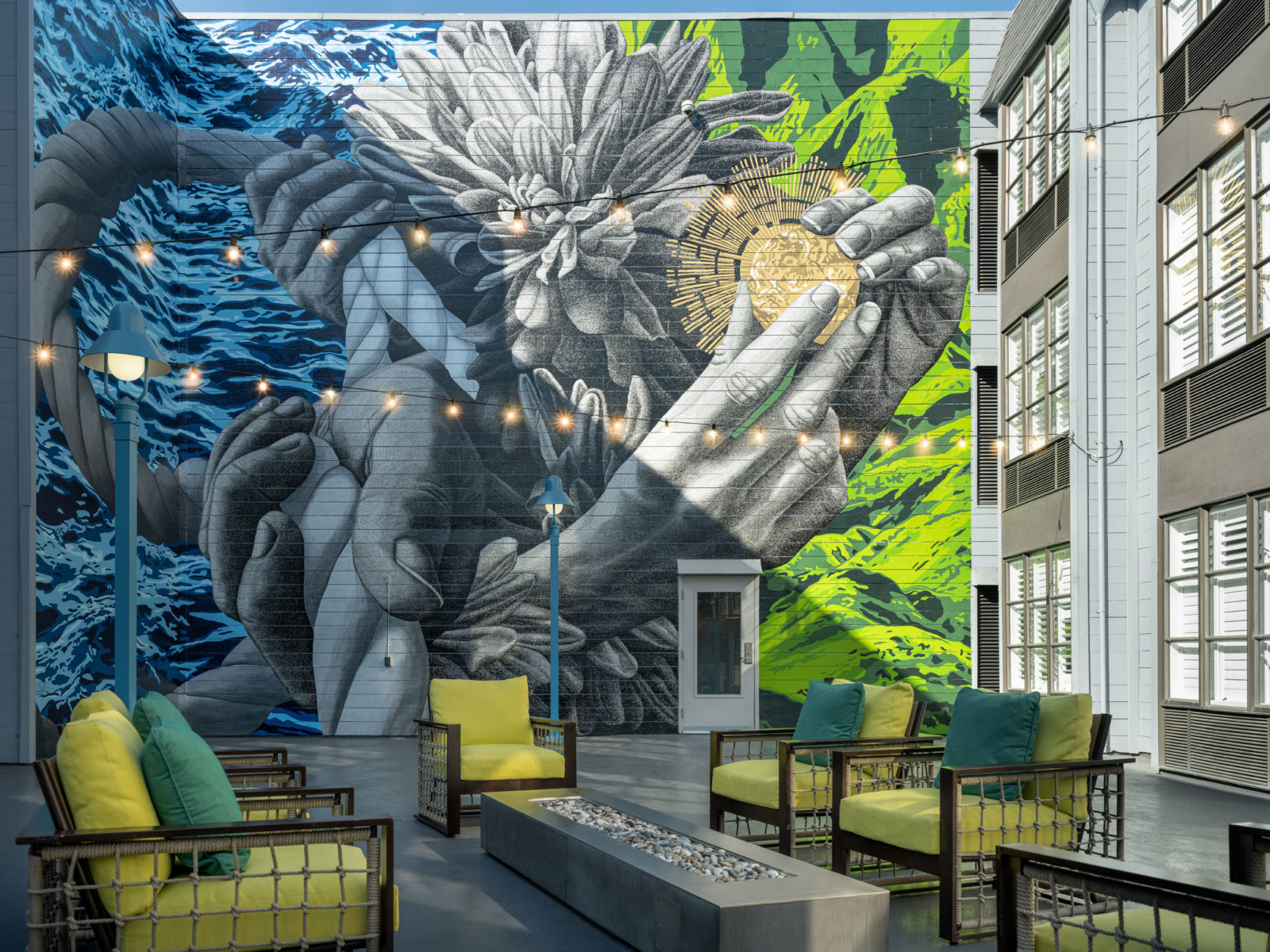 The Making of a Mural

When composing the mural, Valenzuela was inspired by the San Francisco city seal. He wanted to put a modern spin on the building blocks of the city’s past.

“When I came upon the San Francisco city seal, their emblem –– it’s an interesting image that speaks to the history of the area,” he said. “It has the bay waters with a fisherman, and then it has rolling hills with a miner digging gold out of the earth. So I [created] a contemporary reimagining of that symbol.”

From afar, EMBLEM evokes the area’s rich history as a gold rush and fishing destination, with green hills and blue waves. Up close, the imagery is composed entirely of handwritten text; the words themselves create various vignettes that tell the story of the city. It all comes together to form a compelling visual narrative in which word and image are uniquely intertwined.

“When you step back … [the text] disappears, it melts into the figure, and then when you come closer and investigate, there’s all this layered information,” Valenzuela said.

As the focal point of the mural, Valenzuela replaced the city seal’s rising phoenix with a dahlia, which is San Francisco’s official flower. Just as the flower’s petals join together to create one blossom, the city’s diverse residents converge to create a lively, multicultural city. 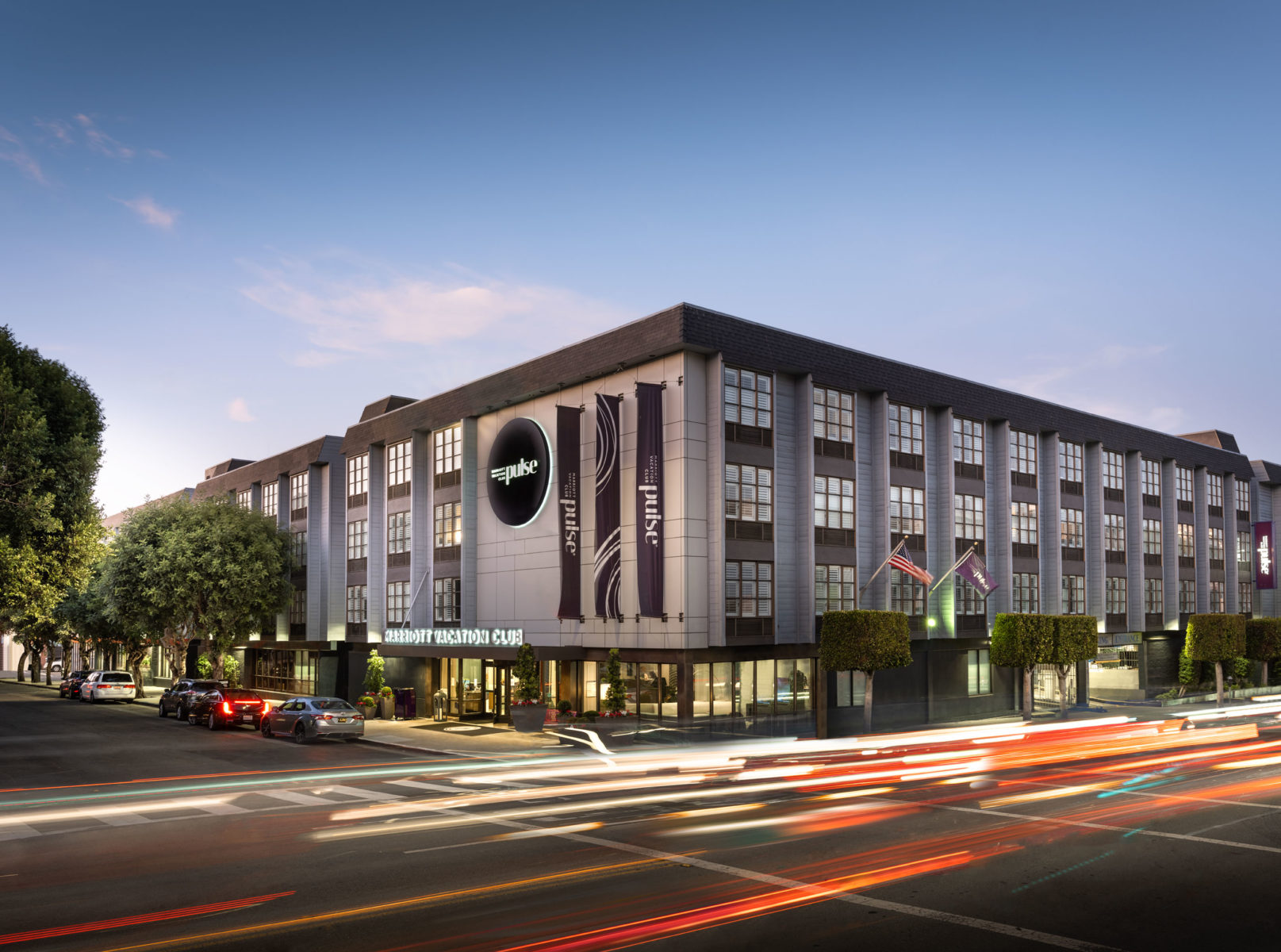 A Taste of Unique Local Culture

So how did this intriguing mural end up in a courtyard at Marriott Vacation Club Pulse, San Francisco? According to General Manager Brandon Elliott, he wanted to turn the blank wall into a canvas for telling the city’s special story.

“Marriott Vacation Club Pulse is all about experiencing local culture, and this mural really highlights so many special parts of San Francisco,” said Elliott.

“We have this amazing courtyard, which nearly half of our rooms face, but [it] was a blank wall,” he continued. “The mural was a great way to showcase the San Francisco Bay area, as well as breathe new life into this great space.”

When Elliott’s team met with Valenzuela, they realized the artist’s distinctive style fit their vision perfectly. “We wanted to create not just a ‘wow’ moment, but something more engaging,” said Jeni James, director of Resort Operations Planning.

The mural is right at home in a city that boasts one of the highest concentrations of street art in the world. Completed this summer, EMBLEM is part of the property’s ongoing effort to infuse the guest experience with authentic San Francisco flavor. 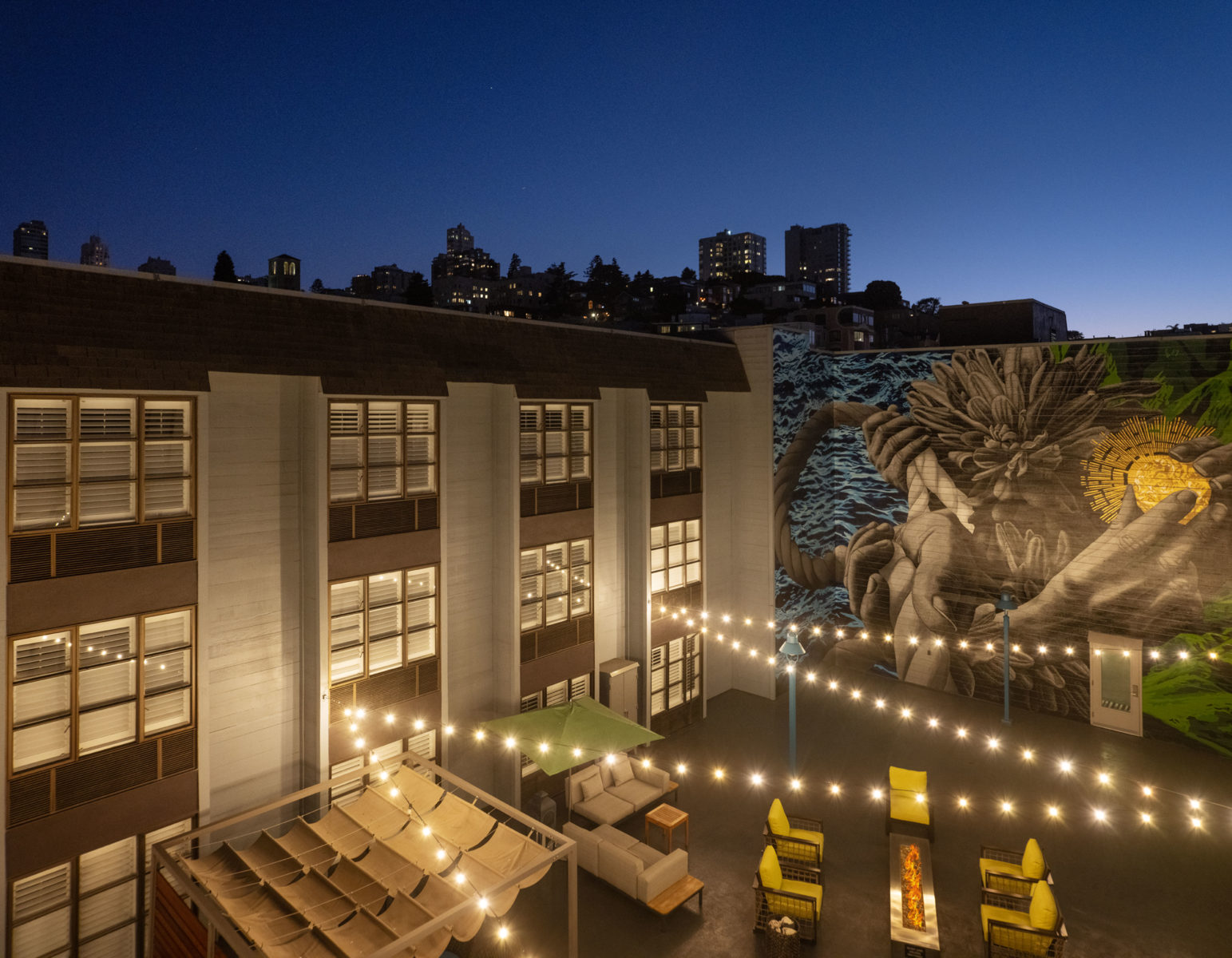 Nestled within the serene courtyard space, EMBLEM invites viewers to reflect on and connect with what makes the city so unique and beloved by visitors from all over the world.

While Valenzuela was crafting the mural, observers of all ages often gazed out their windows and stopped by the courtyard to watch him work, mesmerized by the way he used lines and color to create depth and detail. The finished product continues to intrigue visitors.

“Owners and guests have been surprised and delighted to see the mural in the courtyard space, and they love the local tie in to California and the Bay Area,” said Elliott. “Owners have commented that it’s not something they typically see at other properties. It’s a great conversation piece to discuss and enjoy when sitting by the fire pit.”

Whether they’re in San Francisco for the first time or returning for an encore, the mural offers guests a new perspective and helps them feel a deeper connection to the spirit of the city.

“I hope that this can be a lifting-off point for [guests] to go explore the city,” said Valenzuela after completing the mural. “Now it takes on its own life.”