The Hawaiian island of O‘ahu is a paradise powerhouse. You’ll find so much to do, it takes a robust plan to make the most of it.

O‘ahu encompasses one of America’s most sophisticated cities, two entire mountain ranges, plantations, ranches and small towns all packed into 608 square miles. The dazzling coastline, pounded by seasonally awesome surf, runs for 112 miles and features plenty of busy and remote beaches to choose from.

Here’s a vacation blueprint of things to do in O‘ahu to help you get the most from your stay: 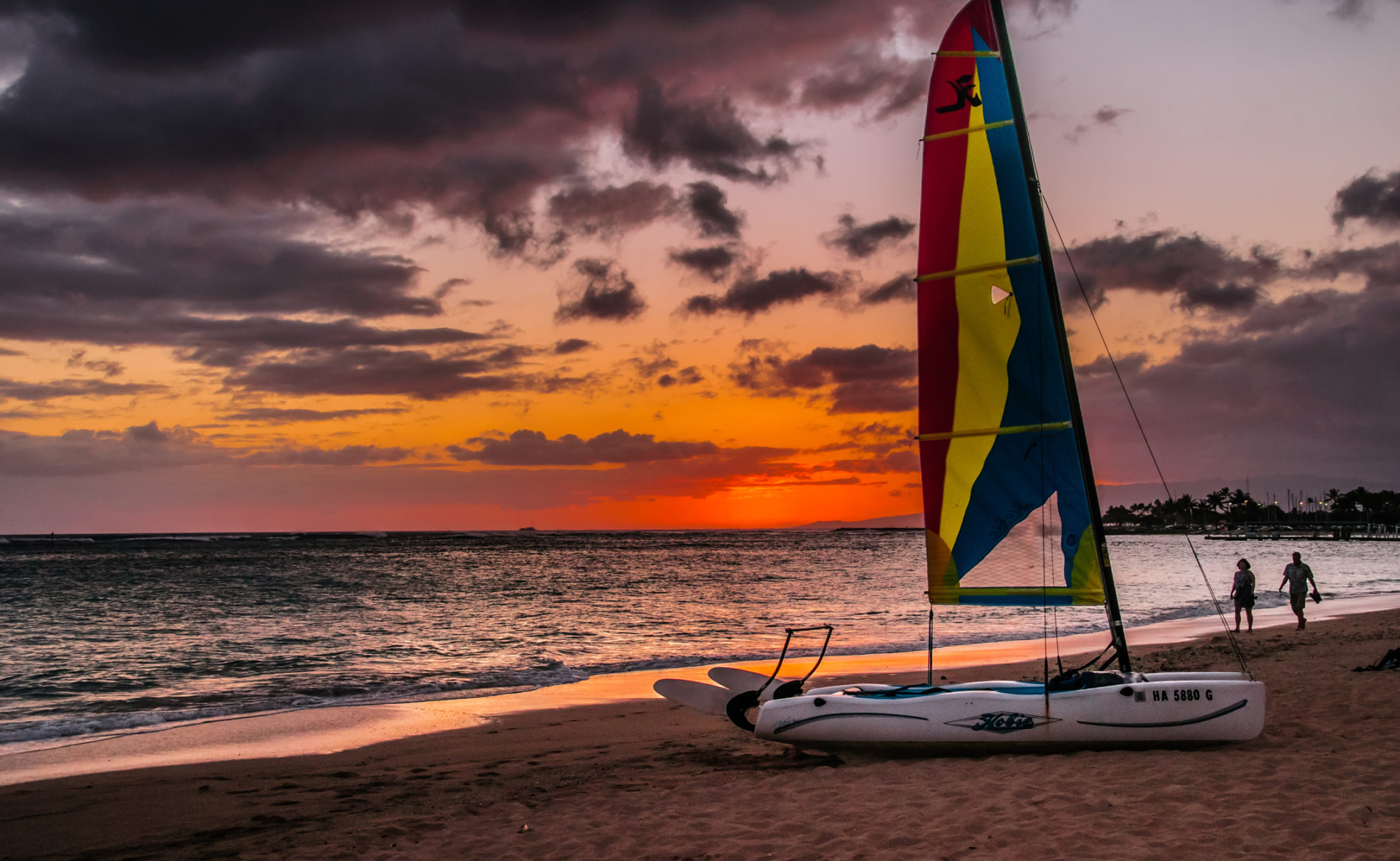 Make your way to breakfast at the Hau Tree Lanai. Beware: Golden hau blossoms may drop into your Kona coffee. The dawn patrol (local execs getting in their surfing before business) will be just paddling ashore, and the long curve of Waikīkī will be basking in the first rays of the day.

Power up with a legendary eggs Benedict, whether it’s the classic, the crab cake Benedict, or Super Kaimana Benedict with beef filet, foie gras–infused mushroom spread, and lobster. It’s okay to have a cappuccino, too; you’ll work it off hiking to the 760-foot summit of nearby Diamond Head.

Bring water and allow a couple of hours for the round-trip into the crater. Follow along a switchback trail, up a steep flight of stairs, and through a tunnel to take in the  jump-for-joy views from the Waianae Mountains in the west and Koko Head in the east. If it’s winter, there may be whales.

Afterward, explore the local neighborhood of Kapahulu, brimming with shops and restaurants. Don’t miss Bailey’s Antiques and Aloha Shirts, where you can choose from among 15,000-plus vintage and new aloha shirts.

Save room for dessert at Leonard’s Bakery, famous for malasadas (Portuguese doughnuts). Have one plain, or dusted in li hing (ground dried plum skin) and stuffed with chocolate or haupia (coconut pudding).

Stagger back to Waikīkī and set sail on one of the catamarans pulled up along the shore. The boat will surf the waves. Beyond the reef, the captain may let down the ladder for snorkeling. Smile — dolphins often show up. 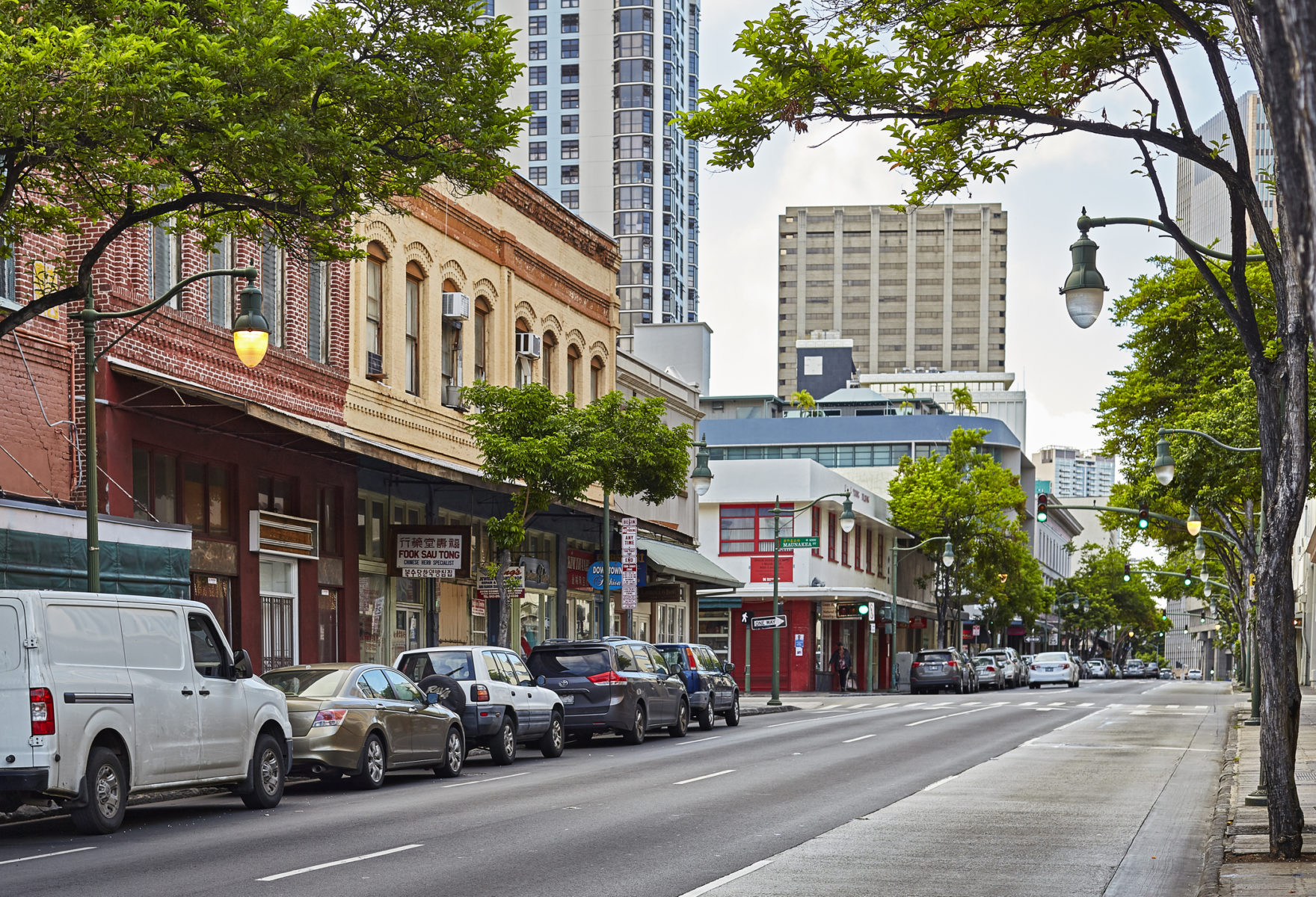 The Chinese have a saying that you gain a day of life for every new dish you try. Add a month or so by breakfasting on dim sum at Mei Sum in Honolulu’s Chinatown. As steaming carts come rolling by your table loaded with bamboo baskets stuffed with dumplings, simply point to what you want. Choose from taro gok, char siu bao (buns filled with barbecue pork), sesame mochi balls, and delicate concoctions of shrimp and chives. Shrimp egg foo yung also makes a good breakfast.

You’re off to a good start exploring Chinatown. Take time to smell the flowers in the lei shops along Maunakea Street, listen to the haggling over hung ducks, mangoes and fish at the busy, aromatic O‘ahu Market and light incense in the ornate Kuan Yin Temple.

Take time out at the famed Foster Botanical Garden, bordering the temple. Some of the highlights are an outdoor butterfly garden, prehistoric glen, great trees, and prom-queen orchids. It’s very peaceful.

Ready for lunch? Grab a slice of New York–style pizza or a whole pie at J.J. Dolan’s, an Irish pub with cold beer and creative drinks.

Next, brace yourself for a fascinating history lesson at ‘Iolani Palace, America’s only official royal residence. Get there early enough for the 20-minute film about the dramatic overthrow of the Hawaiian monarchy. Any true understanding of Hawai‘i, its culture and the political forces shaping the islands today begins here. (Reservations are advised.) You’ll be given booties to slip over your sandals as you tiptoe through the throne room, and lavish dining room set with French china, British sterling and Bavarian crystal. Then it’s upstairs to the royal bedrooms, including the one where Hawai‘i’s queen was imprisoned by American usurpers in 1893.

Across King Street from the palace is the bronze statue of Kamehameha The Great, the king who united all the Hawaiian Islands into one nation and established constitutional law. On the other side of the palace on Beretania Street, a moat surrounds the intriguing architecture of the state capitol. It symbolizes the island state surrounded by ocean. A statue of St. Damien, the Catholic priest who ministered to the victims of Hansen’s disease (leprosy) on Molokai, stands in front.

After all that sightseeing, it’s time to relax. You’ve earned a sunset cocktail on the beachside lanai of House Without a Key. Sip an umbrella drink as the sinuous grace of a hula dancer silhouetted against a blazing sky seduces you completely. You are now officially in love with Hawai‘i. Most Hawaiian songs are love songs — to Hawai‘i.

For dinner, just stroll across the lawn to the seaside open-air restaurant, Orchids, where you can still hear that enchanting music while you savor fresh local seafood from an epicurean menu. Beyond your table, the moon splashes its silver light on the rolling surf. 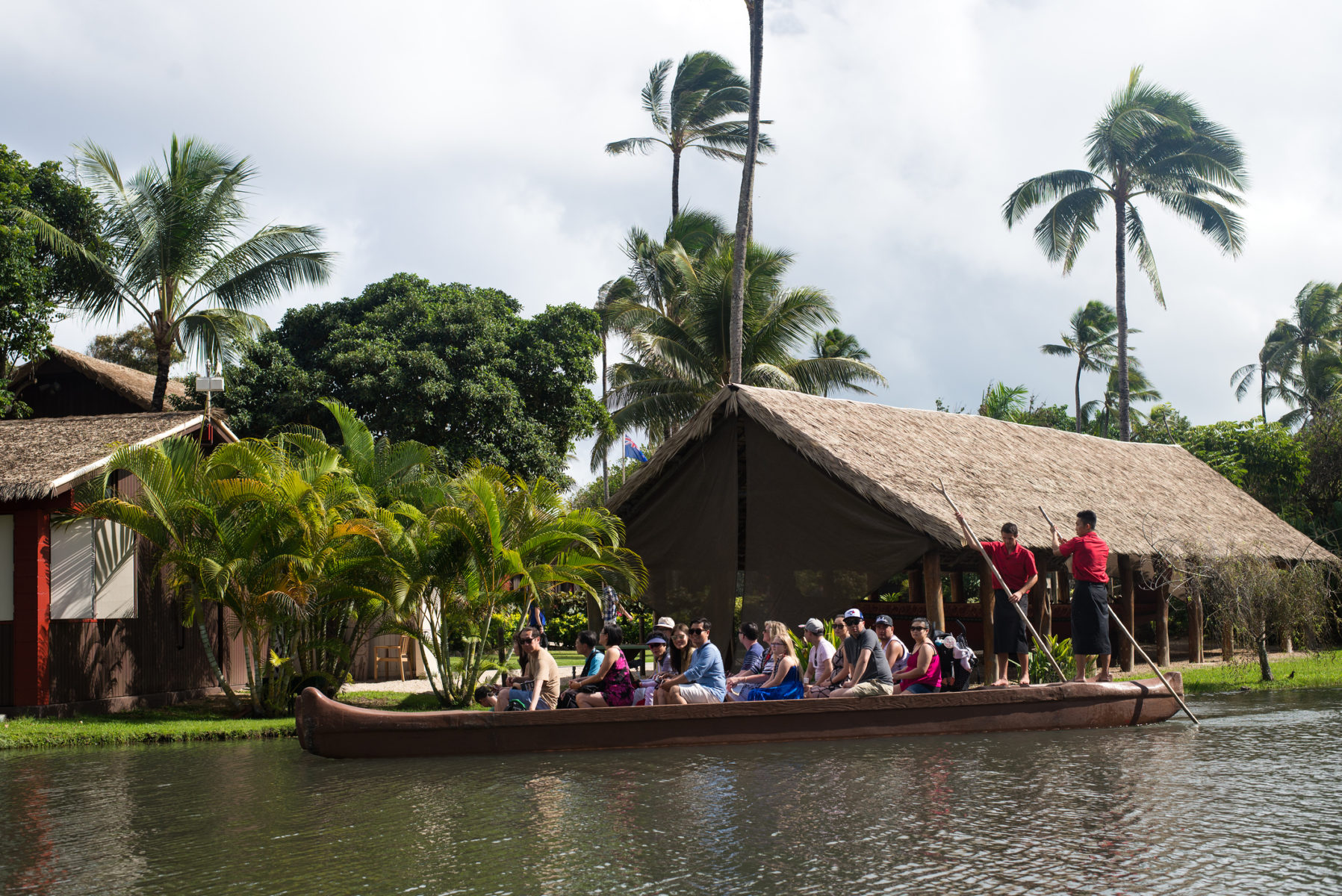 It’s out of Waikīkī today. You’ll take the long way to Laie and the Polynesian Cultural Center. Drive along Kalaniana‘ole Highway to suburban Hawai‘i Kai. Stop at Zippy’s in Koko Marina and pick up Breakfast Bento #3 to go. You’ll get corned beef hash, Portuguese sausage, egg and rice. Have them tuck in a couple of coconut napples — like apple turnovers, but coconut.

Continue east along the dramatic lava coastline, round the curve at Makapuu, peel off the road at the beach park beneath the towering mountains and grab a picnic table. Enjoy breakfast surrounded by one of the most spectacular views in the world.

Next stop: Valley of the Temples Memorial Park, just off Kahekili Highway at Haiku Road. Take several deep breaths as you gaze upon the serene Byodo-In Temple, a faithful replica of an ancient Buddhist temple in Uji, Japan. Bong the bon-sho, the sacred bell, and feel blessings as the deep sound resonates against the Koolau Mountains. Strolling peacocks share the gardens, and more than 10,000 prize golden koi swim in the reflecting pond. A nine-foot golden Buddha presides over it all.

Heading toward Laie, you’ll pass ancient Hawaiian fishponds, marvels of early aquaculture; banana and papaya plantations; farm stands selling ice-cold coconut juice; postcard beaches right beside the road; and the green fields of the sprawling Kualoa Ranch, which you may recognize from the films “Jurassic Park,” “Mighty Joe Young” and dozens of others.

Lunch is a pit stop at Giovanni’s Shrimp Truck. Get messy and tear into a heap of scampi, or, if you dare, the “no-refunds hot-and-spicy shrimp.”

You’ll know you’ve reached Laie when huge tiki (deity images) rise beside the road announcing the entrance to the Polynesian Cultural Center (PCC). Explore numerous islands of Oceania: Tahiti, Hawai‘i, Tonga, Samoa, Fiji, Aotearoa, the Marquesas, and Rapa Nui. Authentically recreated villages are set along waterways and amid the tropical gardens. Villages are staffed by natives of those islands who will share their music, skills, and food. Shake your hips in Tahiti, and taste their coconut bread. Twirl poi balls and get a temporary Māori tattoo in Aotearoa. Pound the giant drums of Tonga. Build a fire without matches, throw some spears, glimpse the secrets of celestial navigation. Tour Polynesia by foot or canoe. There’s also an Imax theater and a wonderful marketplace featuring the weavings, shell art, bags, hats, games and tapa cloth of the islands.

Stay for the lū‘au, the most authentic on O‘ahu. Above all, don’t miss the evening show, Hā Breath of Life. A passionate story of love and family unfolds through drama, dance, and music of the islands in the shadow of an “erupting volcano.” The 100-strong cast has the timing, costuming, and professionalism of a Broadway production. The only problem with the PCC is you won’t want to leave. 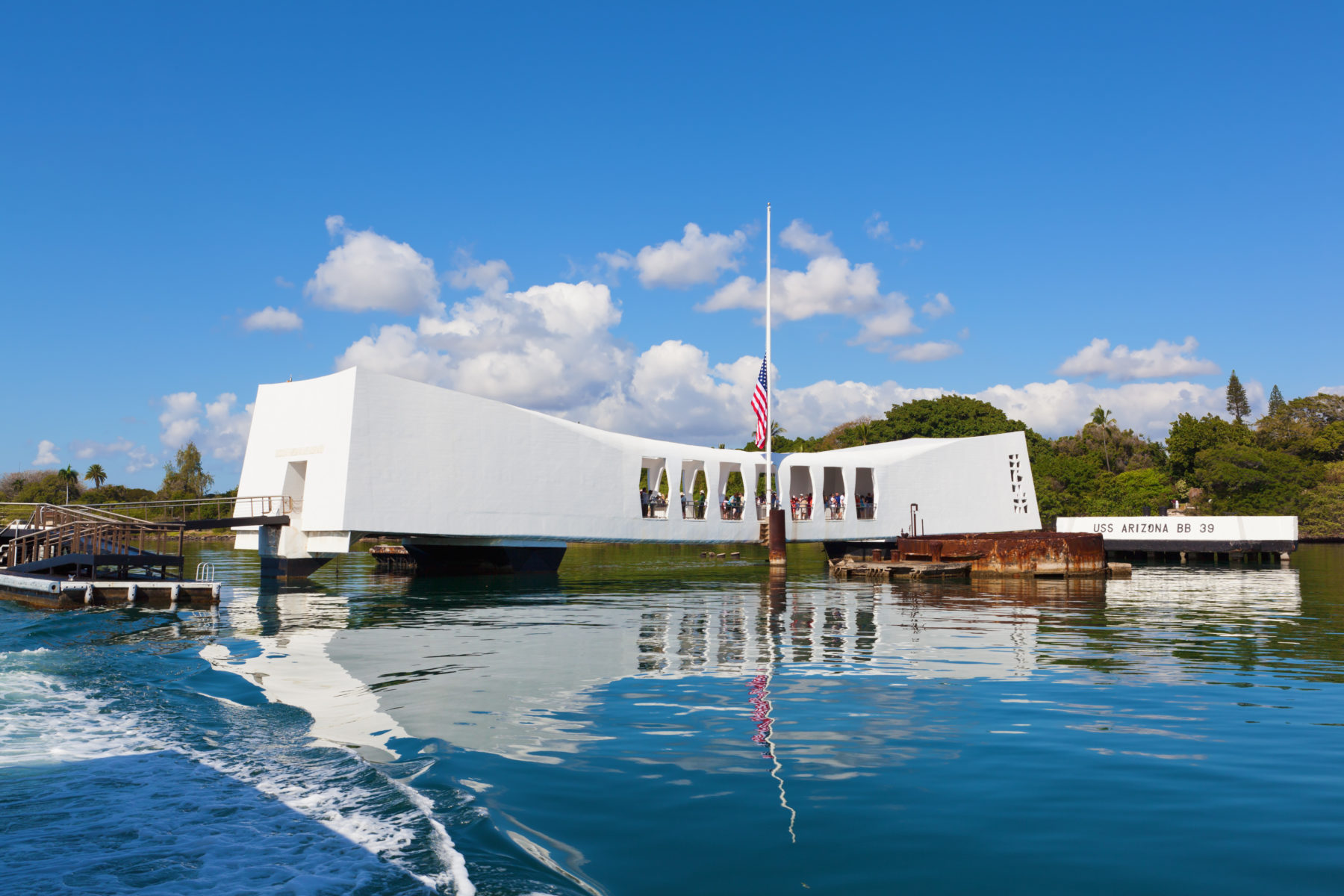 Pearl Harbor is waiting and the crowds can get thick. Immediately upon arrival, sign up for the free tickets for the boat tour to the memorial. (You can also reserve tickets up to two months in advance at recreation.gov.) While waiting, you’ll experience the sneak attack through actual films shot on the Day of Infamy. It’s all very emotional.

Other historic sites abound. Nearby, board the USS Bowfin submarine and visit the adjacent museum. Take the shuttle to Ford Island, home of Battleship Row. Buildings still bear the bullet holes. The Japanese surrendered on the deck of the USS Missouri. You can stand there and see where the war began and ended for the U.S.

The Pacific Aviation Museum, also on Ford Island, houses an amazing collection of aircraft in its hangars. See the Douglas SBD Dauntless dive bomber that helped win the Battle of Midway and an authentic Japanese Zero, such as those that attacked Pearl Harbor. Aircraft from the Korean and Vietnam wars are also on display. Defend the skies using combat flight simulators.

Get back to Waikīkī in time for a swim. Then dress for dinner at Alan Wong’s Honolulu. In an inconspicuous setting, the master chef has elevated local cuisine to international gourmet status. President and Mrs. Obama never miss a date here when they’re in town. Menu offerings include macadamia-coconut crusted lamb chops with taro gratin, a wonderful array of Hawaiian seafood in delicious presentations, island salads, and, of course, fabulous desserts. How about lilikoi brûlée or haupia sorbet in a chocolate shell?

This content is excerpted from an article originally appeared in the fall 2015 issue of the North American edition of Interval World magazine, published by Interval International®, an indirect subsidiary of Marriott Vacations Worldwide. Any re-use of this content, or any portion of this content, is strictly prohibited. All rights reserved.