Bangkok is famous for its street food culture, with roadside stands serving up goodies ranging from alluring to downright pungent. Over four days in Thailand’s capital city, my husband and I set out to try everything the Bangkok street food scene had to offer — no matter how unfamiliar.

When my husband and I travel, we love sampling a destination’s unique culinary delights. In fact, we’ll often plan our activities and sightseeing around restaurants or local delicacies we want to try. When we reached Bangkok, my husband was eagerly rushing me out of our hotel room mere minutes after we arrived so we could begin experiencing the city’s famed street food culture.

In Bangkok, eating street food — an endless variety of cheap snacks, dishes and sweets — is not only a meal, but an experience. The tastes, smells and sights from our trip promised to be a mysterious, delightful, bewildering and radical change from Western fare. We were determined to try it all. 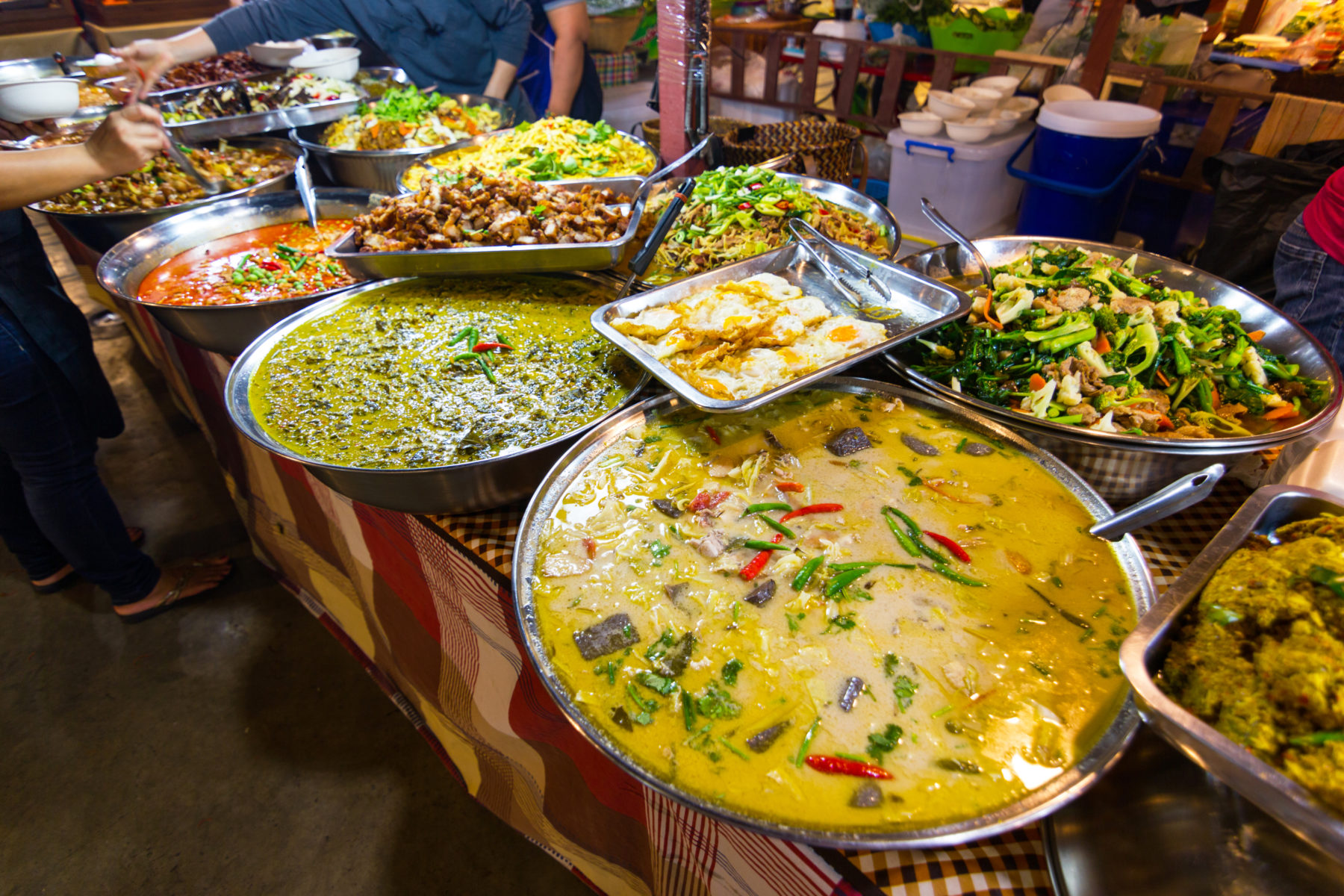 Our first stop was lunch at a street corner near our hotel in the Sukhumvit district. A wizened woman wearing a traditional field hat stood under an umbrella at a makeshift sidewalk restaurant. We sat down at some small picnic tables next to a few construction workers and office employees on lunch break. Then we motioned that we would have what they were having: a made-to-order stir-fried rice dish with cubes of chicken.

The dish looked innocuous enough, except that it was covered with whole, roasted Thai chili peppers. I opted for just a sprinkle of the peppers, while my spice-loving husband indicated that the chef should pile it on. Just a few bites in, he was sweating and hiccuping from the chili heat, while I enjoyed the fragrant flavors of my less-spicy version. In those moments, my husband discovered that Thai-level spice is no joking matter! 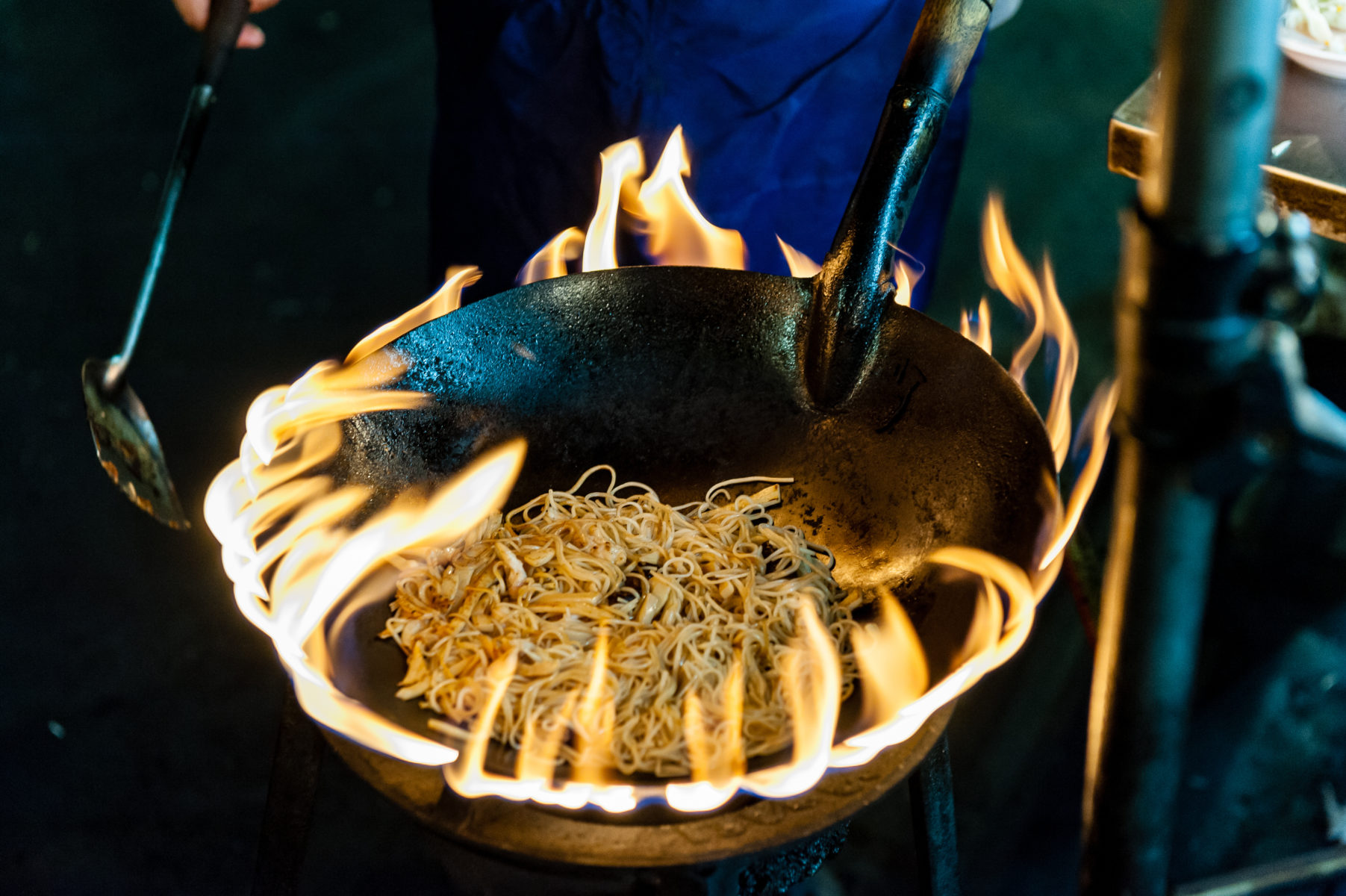 One evening we decided to check out Bangkok’s Chinatown, which features a night market where you can try all sorts of exotic street food. At this bustling hotspot, the streets teem with vendors selling bowls of noodles, sticky sweets, meat on sticks and more, often late into the night.

First, we stopped at a stand serving up fresh-made Chinese-style noodles in a flavorful broth. Customers could choose their own meats and toppings to add to their bowls, and I pointed at a few mystery meats that looked like cuts of beef. It wasn’t until I was about halfway through the bowl that I realized I was eating tongue and tripe — but while it was surprising in its unfamiliarity to me, I paused for only a moment before shrugging and continuing to slurp away. It was the taste that mattered, and I’d never had such tender noodles and flavorful soup. 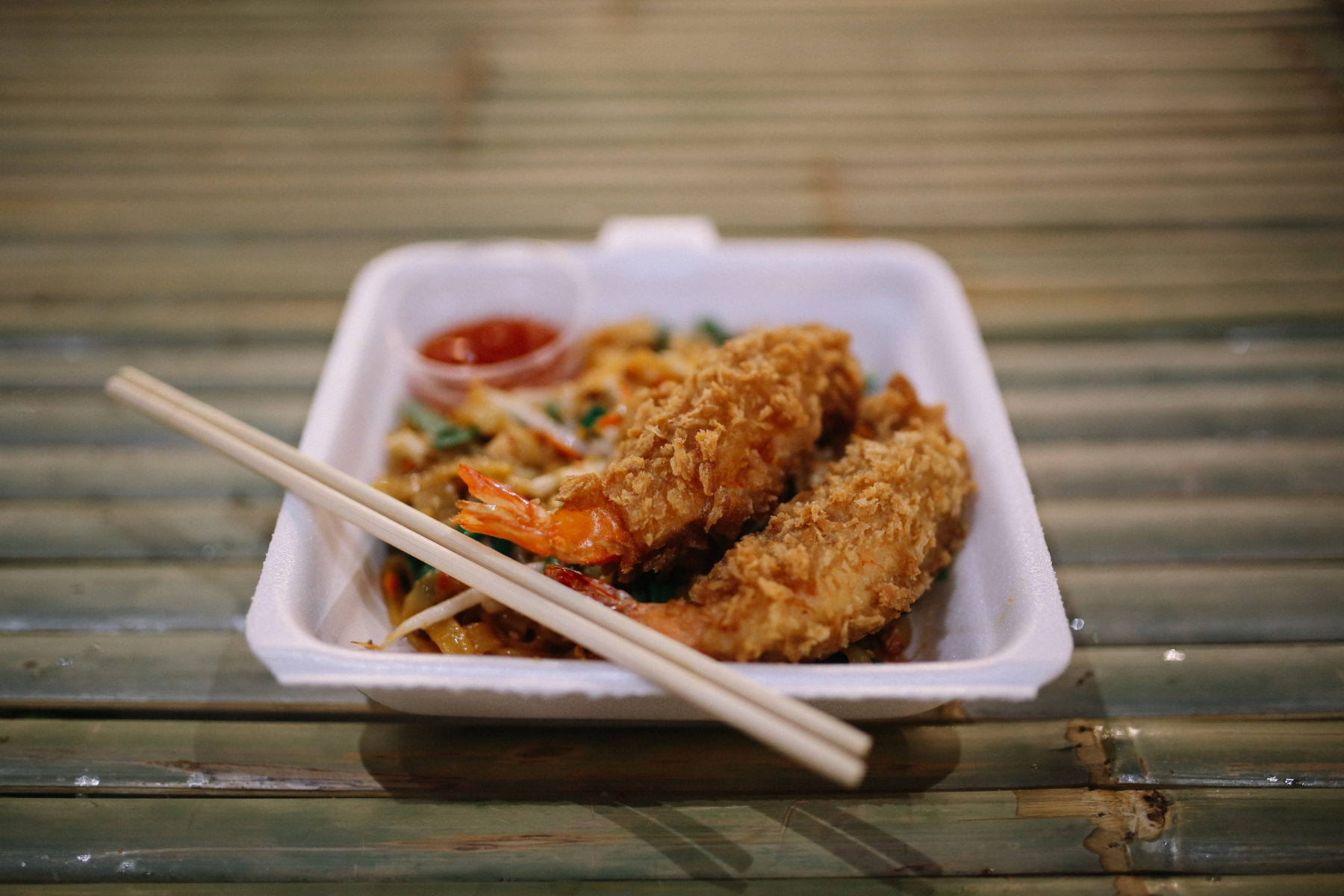 Our stomachs were full, but that didn’t stop us from indulging in a midnight snack at another street vendor. Fresh seafood is abundant in Bangkok, and we got a sampling of it with a plate of fried prawns smothered with a savory sauce and stir-fried peppercorns. We practically licked the plate clean.

Quick Tip: Traveler’s diarrhea is a real concern for Westerners eating unfamiliar street food. Decrease your chances of getting sick by avoiding raw veggies, using hand sanitizer before you indulge and frequenting places that look busy. This signals that food hasn’t been sitting around, and that the stand probably has a good reputation. 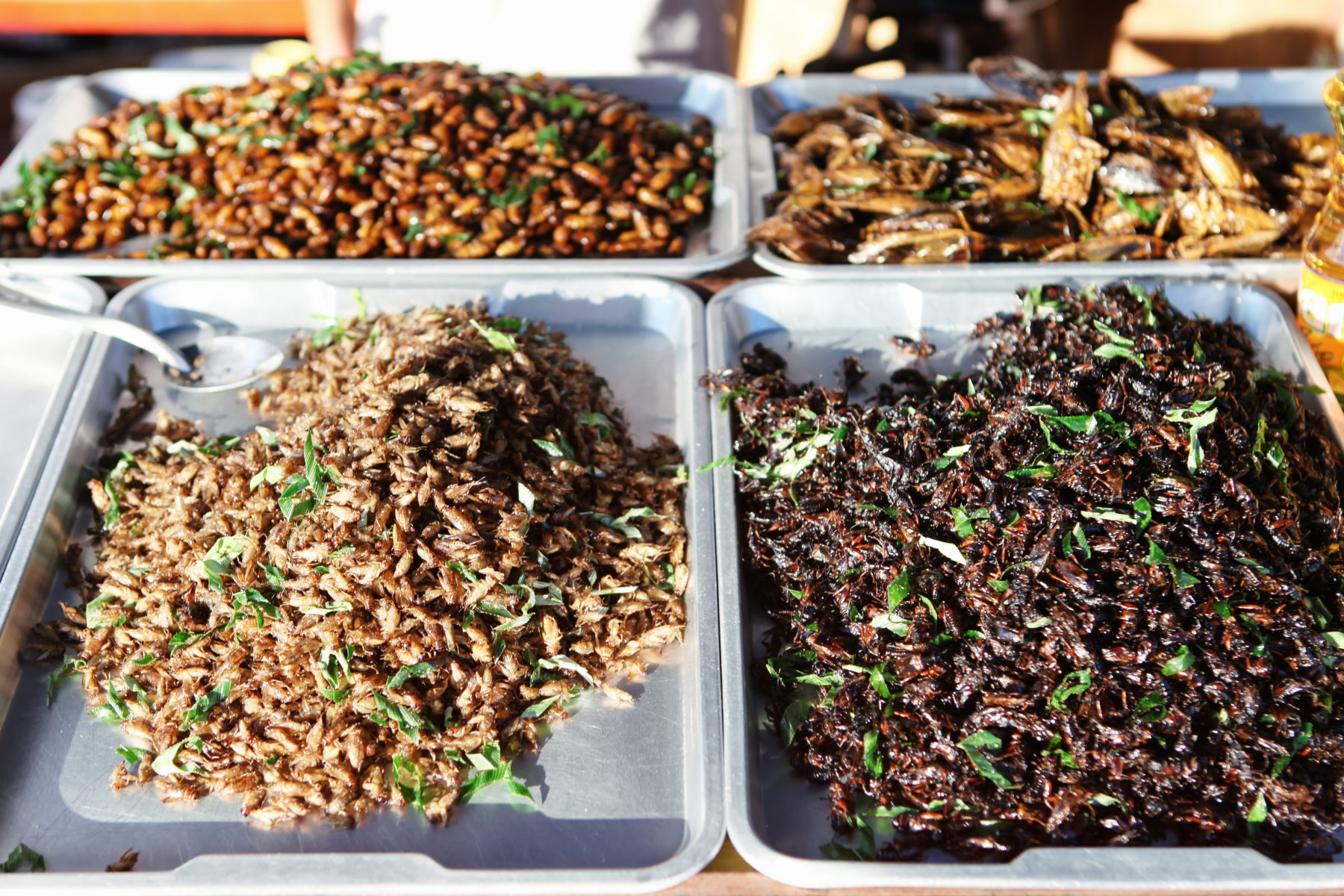 Bangkok boasts some exotic delicacies, so we decided to get adventurous and try some bugs at the Train Market in Ratchada. That’s right: bugs.

Bravely, we lined up to purchase small plastic bags filled with scoops of fried crickets and what looked like pan-seared grubs. The vendor doused each bag with soy sauce and provided long toothpicks as utensils. I hesitantly took a few bites and was pleasantly surprised. They tasted mostly like a random crunchy snack — but it helped to eat them with my eyes closed. 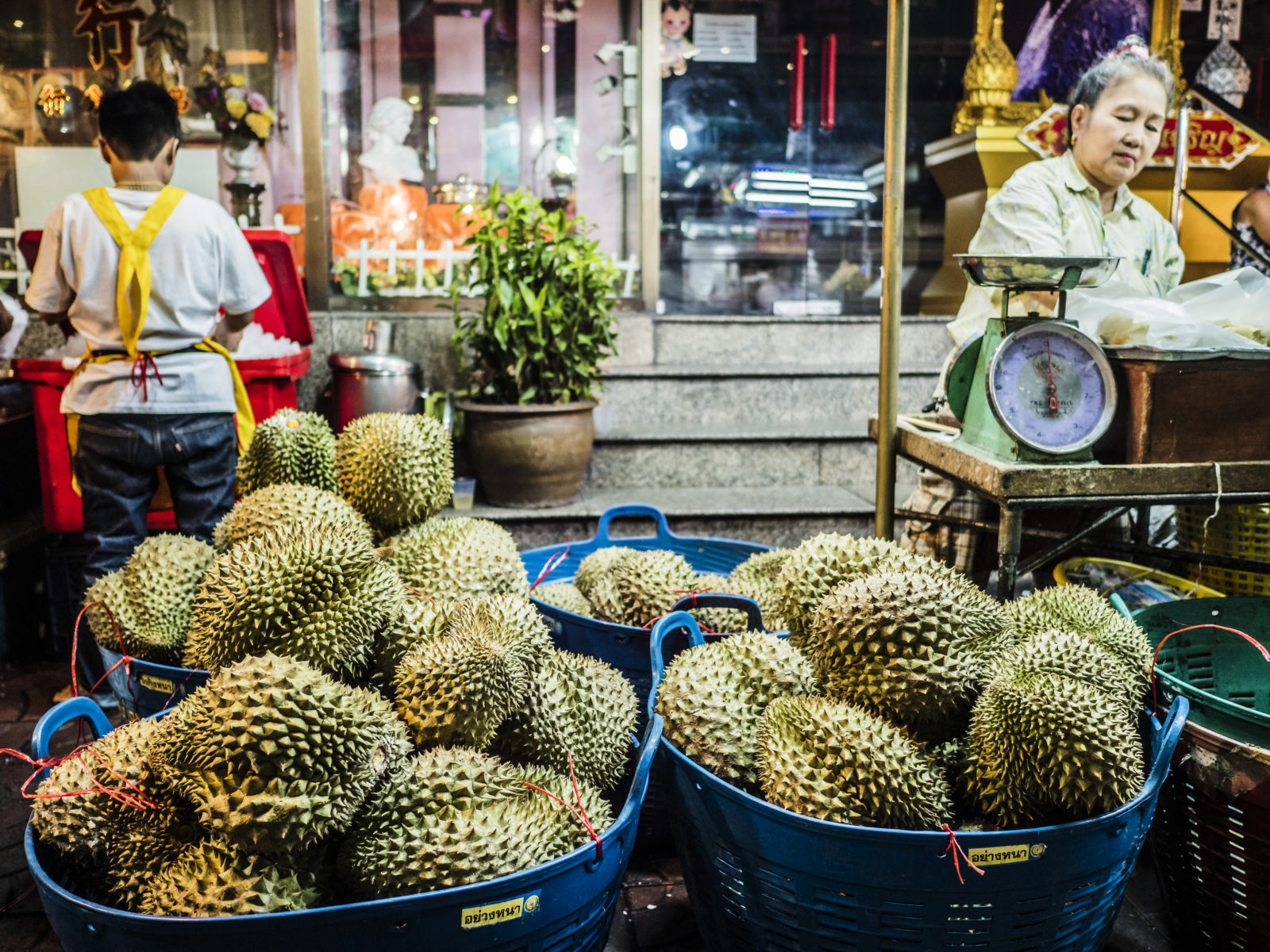 We were also eager to try durian, a large, spiky fruit with soft, yellow insides. It’s considered an expensive delicacy in Southeast Asia and is infamous for its pungent smell, which I’ve heard described as the aroma of old socks. I had to jostle my way to the front of a line to order my piece of durian with sticky rice. For a fruit that looks like a weapon on the outside, the insides were surprisingly soft and yummy. That said, I could see why some despise it, while others love the peculiar flavor. Unfortunately, we made the mistake of bringing some durian back to our hotel room, where we put a piece in our fridge. Two days later, I opened the fridge to the worst smell I’d ever encountered, and I had to rush the offending fruit out to a dumpster immediately.

Quick Tip: Want to try a quintessential Thai street snack, but leery of exotic ingredients? Try mango with sticky rice, which features a slice of juicy, sweet fruit with a scoop of rice drizzled in coconut milk.

Where to Stay:
Marriott Vacation Club® at The Empire Place©