English cuisine may get a bad rap, but London is actually a world-class dining destination, offering flavors from all over the globe.

During a recent trip to London with friends, I took my palate on an around-the-world vacation without leaving the city limits. Here are the highlights of our international food tour: 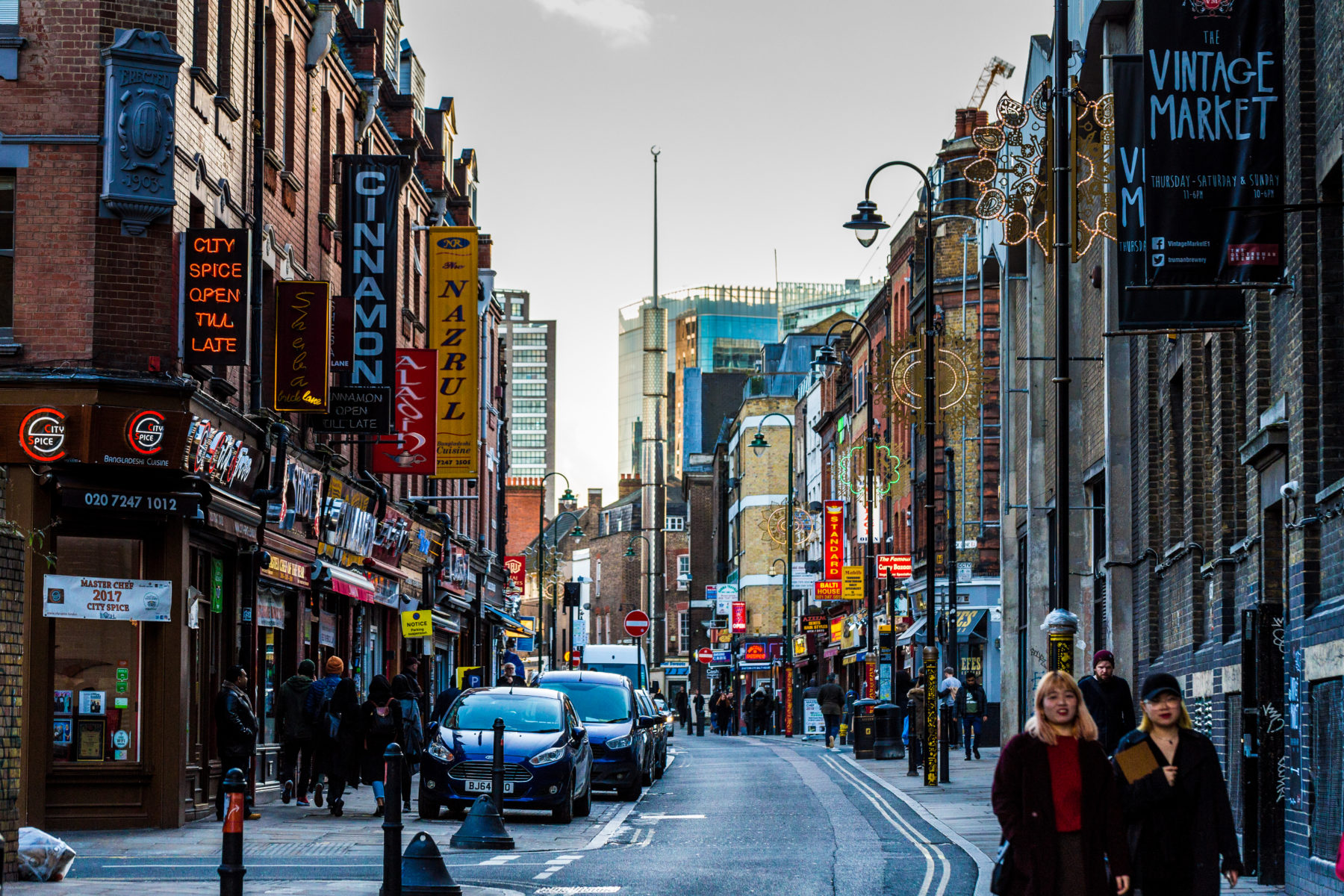 The Flavors of Brick Lane

England’s history with India is long and complicated, but its relationship with Indian food is simple: everyone loves it. In fact, legend has it that the modern recipe for what some consider England’s national dish — chicken tikka masala — was first cooked up in Glasgow, Scotland.

Our mission was to find the best tikka masala in the city, so we made straight for Brick Lane, the vibrant heart of East London. It’s where street art and funky shops coexist with more than 50 curry shops fueled by the local Bengali community. You’d need to spend a lifetime in London to parse through all the flavors the neighborhood has to offer, but Aladin Brick Lane is one of the most popular options. We stopped by and scarfed down the rich, creamy, incredibly flavorful tikka masala, agreeing that it was among the most delicious we’d ever tried.

For another meal, we wandered down the street and wound up at Tayyabs — a packed Pakistani spot. Upon discovering its BYOB status, we posted someone in line and the rest of us ran across the street to grab a six-pack of London Pride beer. Then, we gorged on an epic spread of spicy and flavorful dhal, karahi fish and huge grilled lamb chops served on a sizzling platter.

The next day, it was time to investigate the East even further — China specifically, which offers staggering variations in regional cuisine, nearly all of which can be found in London. Our first stop was A. Wong, a minimalist eatery near Westminster where traditional Cantonese dim sum gets modern upgrades. The shumai came with a house-made pork rind, while the shrimp dumplings were served with a dollop of tangy citrus foam. Another highlight of the meal? A decadently earthy and rich wagyu tart with black beans and truffle.

Later, we wanted something more traditional for dinner. So we headed to Xi’an Impression, which specializes in the street food of the Shaanxi province in central China. The regional cuisine is famous for its blend of Chinese and traditional Middle Eastern flavors like cumin. We tried a specialty dish, the unforgettable biang biang — wide, chewy, hand-pulled noodles doused in a spicy chili sauce and studded with chunks of tender beef. We focused so much on slurping, we forgot to talk.

One of the luxuries a vacation affords is the opportunity to indulge in an extravagant lunch. We did just that at Terroirs, a relaxed but refined French restaurant just down the street from Big Ben. Bitter rainbow chard and a tangy mustard sauce tamed the gaminess of a roasted rabbit leg perfectly; an excellent earthy red from Languedoc washed it all down.

For an afternoon pick-me-up, we stopped into Capote y Toros to savor Spanish Rioja and jamón — carved paper-thin off a leg right in front of us. This hole-in-the-wall restaurant in Kensington sports bright pink walls and is a popular spot for those craving Catalan cuisine and great wine.

That evening, we snagged a table at Brawn, where coastal Mediterranean fare is filtered through contemporary East London. Just like its neighborhood, the menu changes daily based on what is seasonal and fresh. We gobbled up an umami-rich black pudding served with squid, incredible raw scallops made briny by capers and Cantabrian anchovies, and a decadent veal ragù that would make any Italian grandma proud.

We celebrated our final evening in London with a pub crawl. First up? The Wigmore, a stylish take on a traditional pub (vaulted ceilings, soothing green walls, lots of rich mahogany) that serves, quite simply, the best French fries I’ve ever had. They were incredibly crisp, with a soft center and a rich, savory flavor courtesy of a dusting of Bloody Mary spice. I didn’t even use ketchup.

Next up, a pint at the Arbitrager, whose “Drink London” motto summed up our primary goal of the evening. We chose from a selection of native beers and spirits served alongside a menu of London-made snacks, including a Scotch egg and some delicious charcuterie.

But perhaps nothing encapsulated modern London better than 40 Maltby Street. We took a cab to the south side of the Thames for dinner at this wine shop, which offers a seasonal menu (scrawled on a blackboard daily) of shared plates. The shop, like the modern Londoner, embraces the city as part of a larger international community. You can get a glass of wine from Lebanon with a plate of Parma ham paired with local Stilton cheese — all of it mixing in perfect harmony.

40 Maltby Street may not be a pub in a superficial sense — you won’t find warm pints, football on TV, wood or brass. But it was filled with Londoners of all ages, tired from a long day, who wanted to relax, nibble on delicious food and share a drink with a friend. Which is exactly what we did.