Bologna, Italy, may not be on the radar of most culinary-minded tourists, but my family delighted in the tasty food and affordable wine we found there.

For foodies, Bologna is a must-visit. The university town boasts a lively spirit and fresh Italian cuisine at reasonable prices.

Located in Northern Italy, between Florence and Tuscany to the south, Milan to the north and Venice to the East, Bologna is an authentic, vibrant Italian city. Modern graffiti coexists alongside gorgeous historic churches and medieval structures. You won’t find rolling hillsides, endless canals or ancient Roman ruins, but you will sample some of the best Italian food you’ve ever eaten. 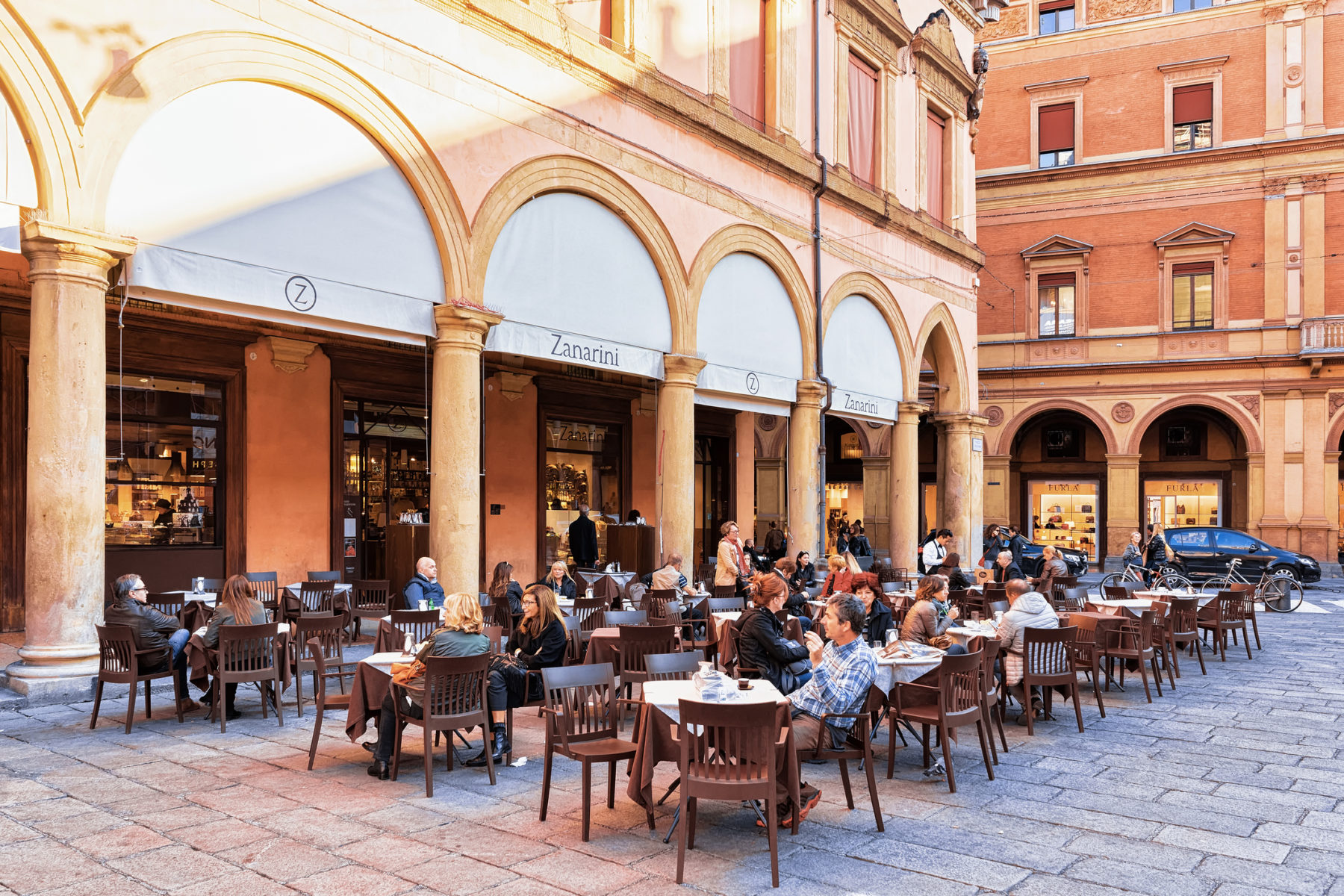 During our Bologna trip, we were especially excited to try the foods at local trattorias, pizzerias and osterias, low-key casual Italian dining spots. Because Bologna is less a tourist town and more a university hub, owners speak little English, and the food is not crafted to “tourist tastes.” That makes for the best Italian eating experiences!

Our first night’s choice brought us a taste of tagliatelle Bolognese (which we continue to crave, but can’t seem to find in the U.S.). The dish features the city’s famous sauce — ragu alla Bolognese — with ingredients like bacon, beef, carrots, white wine, milk and, of course, tomatoes. The sauce is served over tagliatelle pasta, similar to fettuccini, but slightly narrower. It’s a first, or primi, course, as this is the tradition with pasta in Italy. The secondi course follows the pasta and is usually a meat or fish dish. 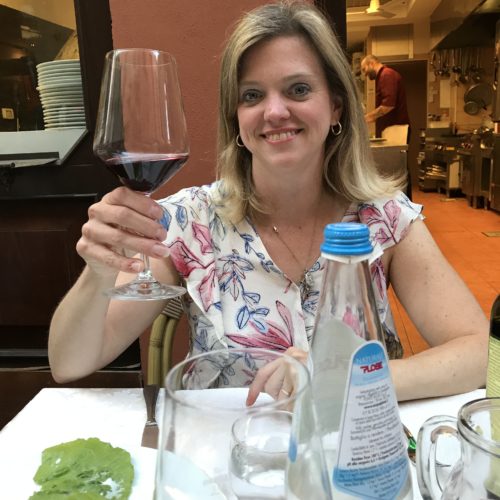 Another classic must-try Bologna dish is green lasagna. Certified by the Accademia Italiana della Cucina, the dough is prepared with spinach, and the sauce is a traditional Bolognese ragu. If you’re a pasta lover, tortellini Bologna-style (filled with pork loin, ham, Mortadella and Parmesan cheese) is another can’t-go-wrong choice.

One of the biggest surprises was the quality and affordability of wine. Night after night we ordered a mezzo, or half-liter, of a restaurant’s delicious red table wine. Often it was less expensive to order wine than a soda in Bologna!

We found some of the best restaurants down quiet side streets. To avoid touristy establishments, don’t visit places where an employee is trying to lure locals inside or where the menu has pictures. 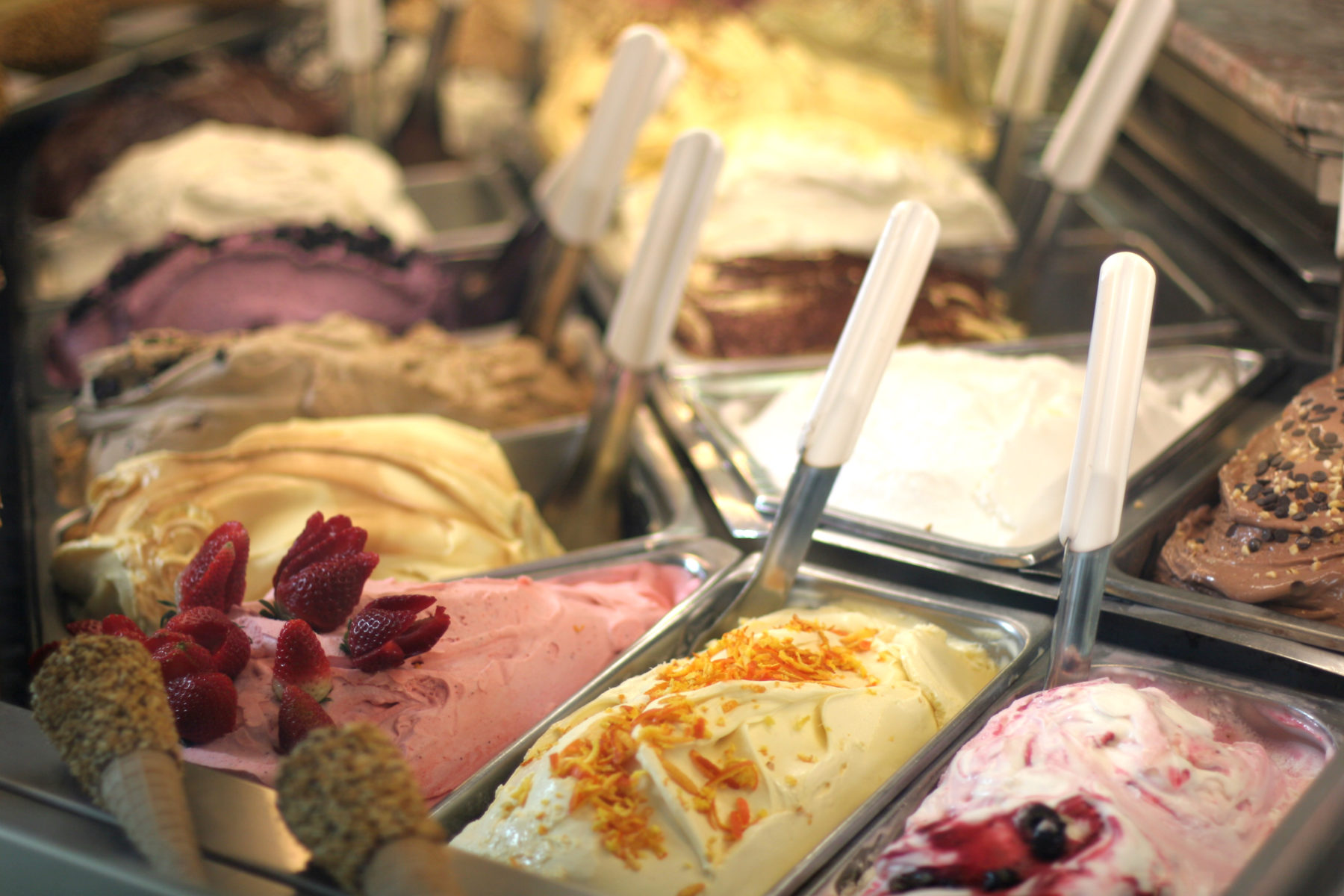 Our kids were a little less adventurous when it came to trying some of the city’s more famous dishes. But they were absolutely sold on the classic Italian margherita pizza prepared with tomato sauce, mozzarella and basil (order marinara if you don’t want any cheese). And they gave us no arguments over sampling several sweet flavors of gelato whenever we happened upon it.

In Italy, you may find pizza sold by the “gram” in a large oblong slice. Roughly 100 grams is a nice snack, while 200 grams is better for a meal. And when ordering gelato, don’t make the mistake of picking just one! The flavors are designed to complement each other, so pick at least two or three flavors.

If you arrive early before hotel check-in, you can leave your luggage at a centrally located luggage deposit for just four to five Euros per day. 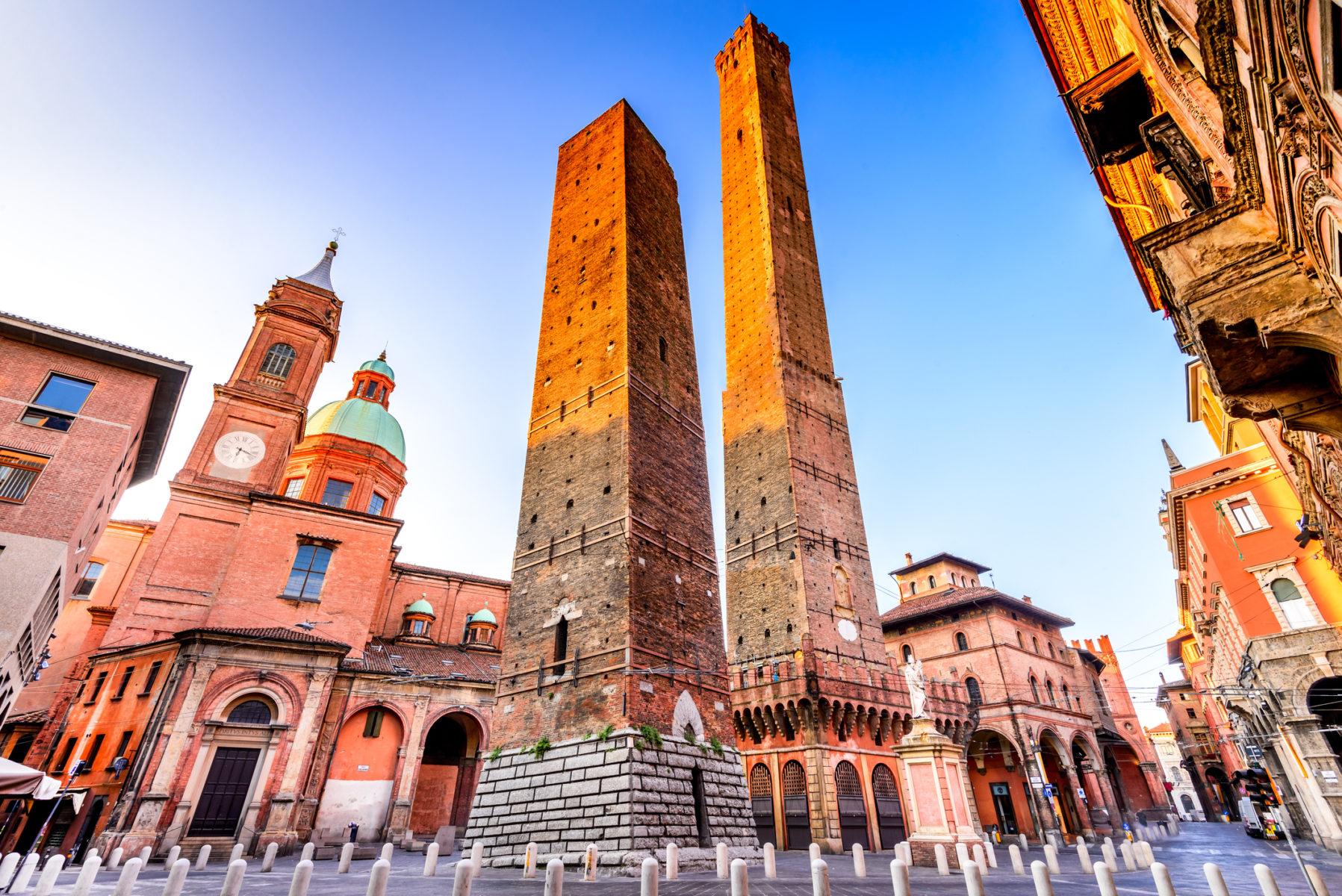 Although food takes center stage during our vacations, my family enjoyed learning about the city’s history as we ate our way through Bologna. One of the first universities in the Western world, the Universita di Bologna dates to the 11th century and students still fill the streets today.

As we wandered, we also enjoyed views of impressive medieval towers, which were built by powerful families to display their wealth and power. Although only 20 of the 100 towers built still stand, it’s impossible to miss them. 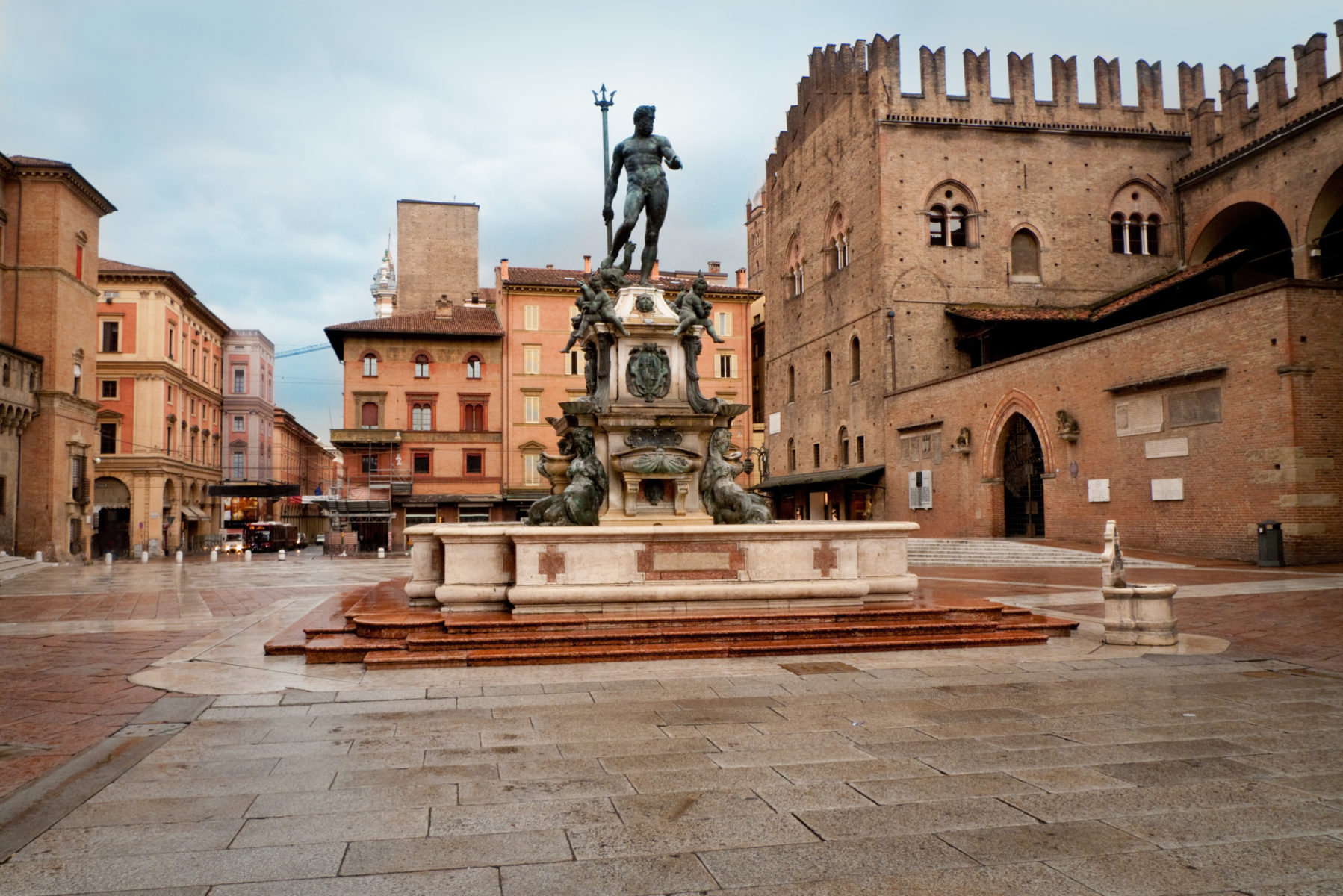 One of Bologna’s most famous features is the 16th-century Fountain of Neptune in the Piazza Maggiore, displaying Neptune surrounded by four angels. Another fascinating site on this piazza, the Basilica of San Petronio, was started in the 1300s but never finished; the façade remains today.

The city boasts many ancient palazzos, or palaces, dating to the 1200s. You’ll also find several great museums showcasing everything from ancient musical instruments and archeological findings to Italian history and modern art. Seemingly along every block is a church, beautifully designed, and if you look closely, many contain the relics of saints and other holy people. 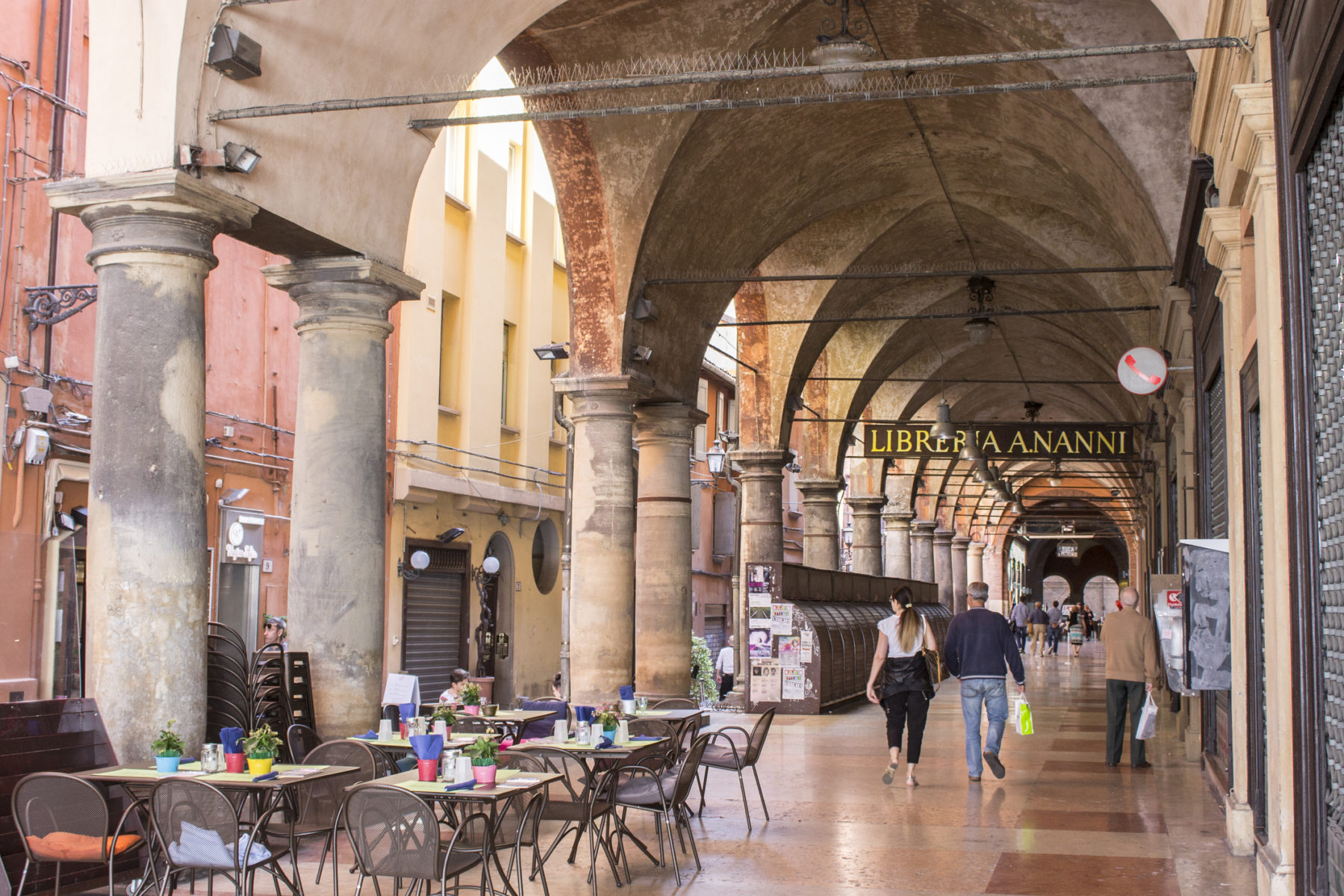 While the history is an undeniable draw to Bologna, my family and I most enjoyed strolling through the city’s iconic arcades filled with shops, snack “bars,” gelaterias and more. We also stopped inside a few tabacchis, Italian convenience stores that also sell city bus tickets. These arcades run along lengthy porticoes that go on for blocks, adding a unique cadence to the city’s personality.

Overall, we were sad to leave the fantastic food and atmosphere of this central Italian city. For our next trip to Italy, we plan to allot several days to visit Bologna, just to eat!

Bologna’s historic city center does not allow through traffic. If you’re arriving by car, you’ll need to park in a parking lot outside the restricted area. And yes, that means hauling your luggage to your hotel, too.

Savor the cuisine of Italy with a culinary tour available through the Marriott Vacation Club Destinations® Exchange Program.