A former regular returns to her summer stomping ground and discovers fall has just as much to offer.

It was right there, a crab about the size of a silver dollar, and it looked close enough to touch. I leaned my face over the edge of the boat dock at Lollie and Poppy’s house, the name I used for my paternal grandparents, and my knees and hands scraped the wooden planks.

“Get closer,” said Poppy, standing barefoot behind me. “You can reach it.”

He nudged me with his foot, and before I knew it I was splashing in 20 feet of frigid — and impossibly clear — Lake Tahoe water. The crab that had appeared right at my fingertips from the dock was not even anywhere near my toes extending a few feet underwater, and there was no way I was diving down to get it. As I swam to the rocky beach, I could hear Poppy’s cackling laugh. He got me.

I never went to camp; never pulled a prank on the boys’ cabin; never took a moonlight canoe trip to capture the flag. But what I did have was Poppy (for pranks) and The Lake, as my family called it, where visits to my grandparents’ house in Carnelian Bay meant drinking straight from deep blue waters, cannonballing off the dock, skipping rocks, going on boat rides and the bats that Poppy swore flew overhead at night when I asked to sleep outside on the deck.

My grandparents sold that house in the early ’80s, and have both since passed away. Over the years, I have often thought back to those warm, carefree days, but hadn’t returned except when there was snow on the peaks and skis on my feet. So for my 20th wedding anniversary last fall, I chose to celebrate with a trip to Lake Tahoe, where I rediscovered all the outdoor wonder of my childhood and incorporated loads of grown-up fun that has me convinced, now more than ever, that Lake Tahoe is timeless. 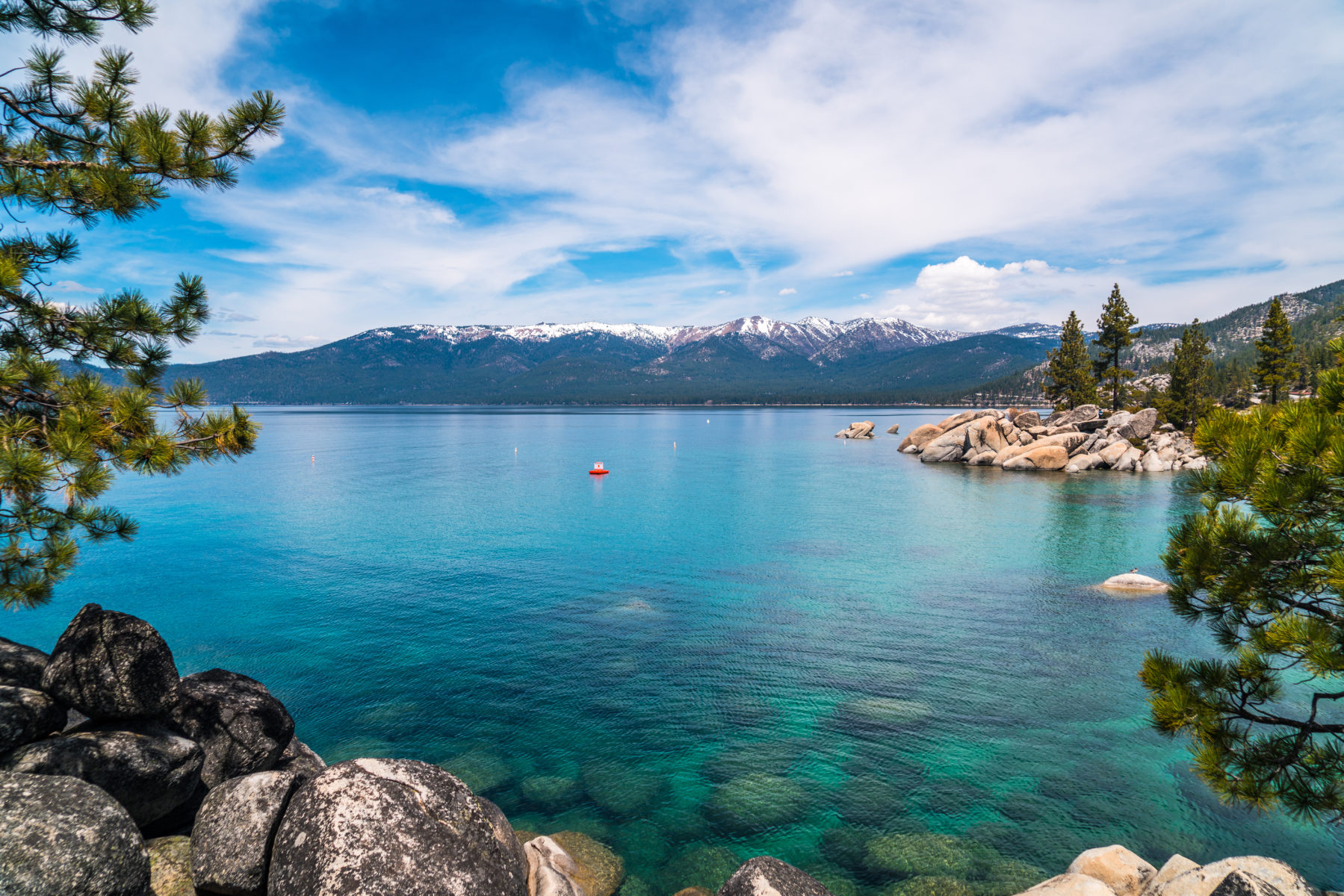 The Lake of the Sky

Just 200 miles northeast of San Francisco, and about 45 minutes from Reno-Tahoe International Airport, Lake Tahoe hits you like an oasis would a thirsty traveler, when its glassy expanse of cobalt blue comes into view for the first time. At 22 miles long and 12 miles wide, Lake Tahoe is the largest alpine lake in North America, and sits astride the California-Nevada border at an altitude of more than 6,200 feet.

There are numerous scenic overlooks where you can stop and snap a photo along the 72-mile road that circles the lake, but my fall favorite was the Crystal Bay Fire Lookout Trail. From about 800 feet above the liquid surface, Lake Tahoe sprawls like a slab of polished sapphire between pine-carpeted peaks whose inverse image appears painted on the smooth watery canvas. From any perspective, though — north, south, east, or west — the point at which the wall of cobalt water blends into cerulean sky is what blue must have looked like at its genesis, and is one of Lake Tahoe’s most unique characteristics.

Watching the twilight transition remains a do-not-miss rite of passage, and is easy to do thanks to the dozens of beaches, picnic grounds and waterfront restaurants and bars situated around the shoreline. Try Sand Harbor or Secret Cove if you want an all-natural setting, or stop in at Chambers Landing, an A-frame cabin that is the oldest bar on Lake Tahoe.

One evening, my husband and I had dinner and sipped a cocktail at Gar Woods Grill & Pier in Carnelian Bay. The restaurant is just a rock skip from where I used to do the same on my grandparents’ beach. The sky turned 50 shades of pink, orange, and purple while we enjoyed our beverage and chose plates from a menu that includes French onion soup, steaks, and shell pasta with grilled chicken, pancetta, artichoke hearts and smoked Gouda. 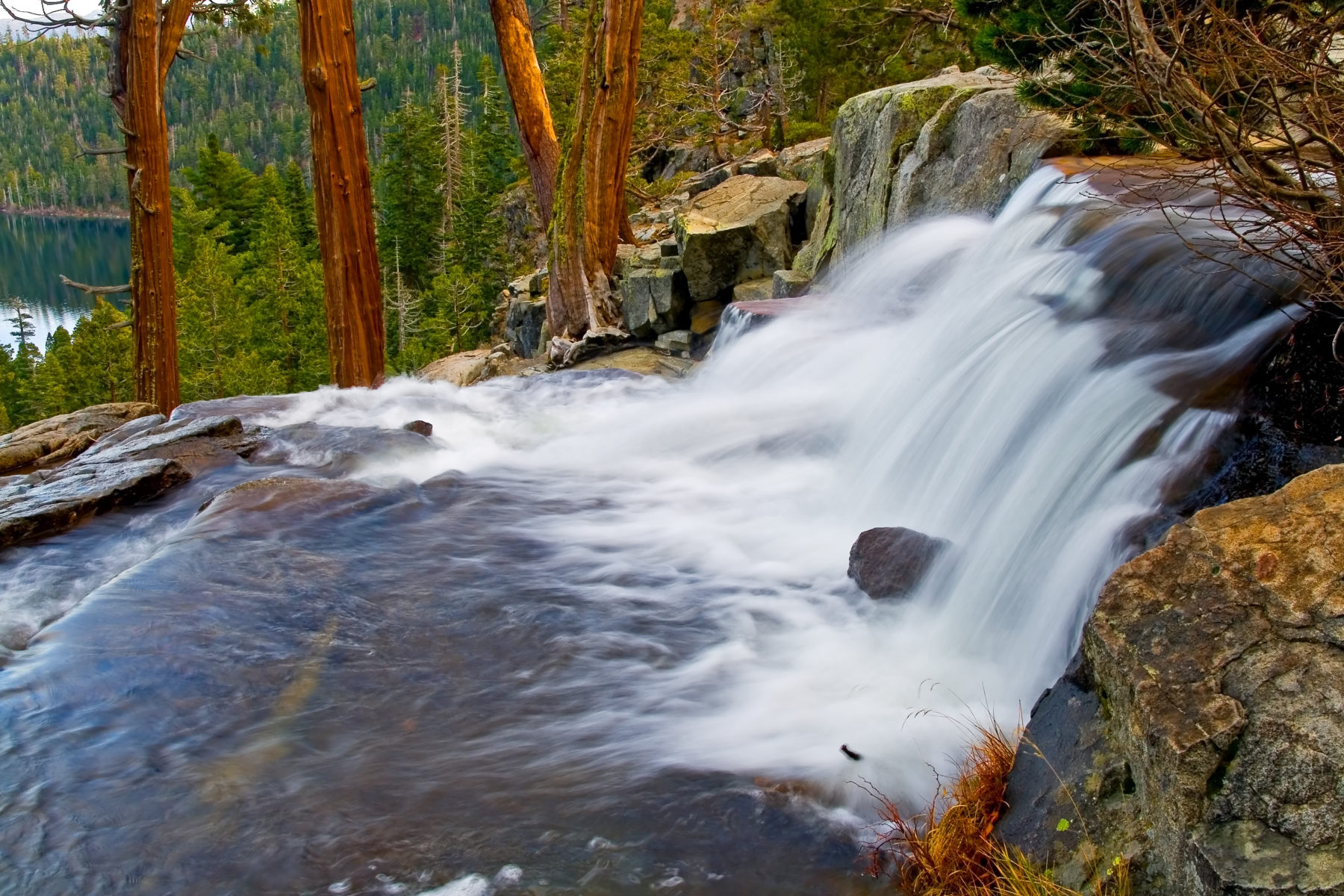 While summer in Lake Tahoe can mean traffic jams and two-hour-plus waits for lunch or drinks on popular outdoor dining decks, post–Labor Day is a sort of “secret season,” when the sun still shines but the tables open up and the roads aren’t nearly as crowded.

I’m not a hardcore outdoors person, but after arriving and getting that first full scent of September, I felt an inner twitch to lace up my hiking boots. There are a staggering variety of trails around Lake Tahoe that range from 30-minute, lunch-by-noon walks to all-day, pack-food-and-water treks — and everything in between. We took on the short (a mere two miles round-trip) Eagle Falls Trail, which didn’t wear us out, but did deliver on scenery thanks to the namesake cascading waterfall.

Before that walk — and, actually, our entire anniversary visit — I would have sworn that the Tahoe sky couldn’t get any bluer than it does during the height of summer. Autumn proved me wrong. And paired with the color-changing aspen and cottonwood trees shimmering in shades of red, orange and gold, the season upped the region’s beauty quotient tenfold.

A good hike puts you in the midst of the trees. A fall-foliage drive, however, allows you to see the entire forest. The Mount Rose Highway was recommended to us, and after witnessing all the golden, reddish panoramas adjacent to the lake, I’m happy to pay the recommendation forward. 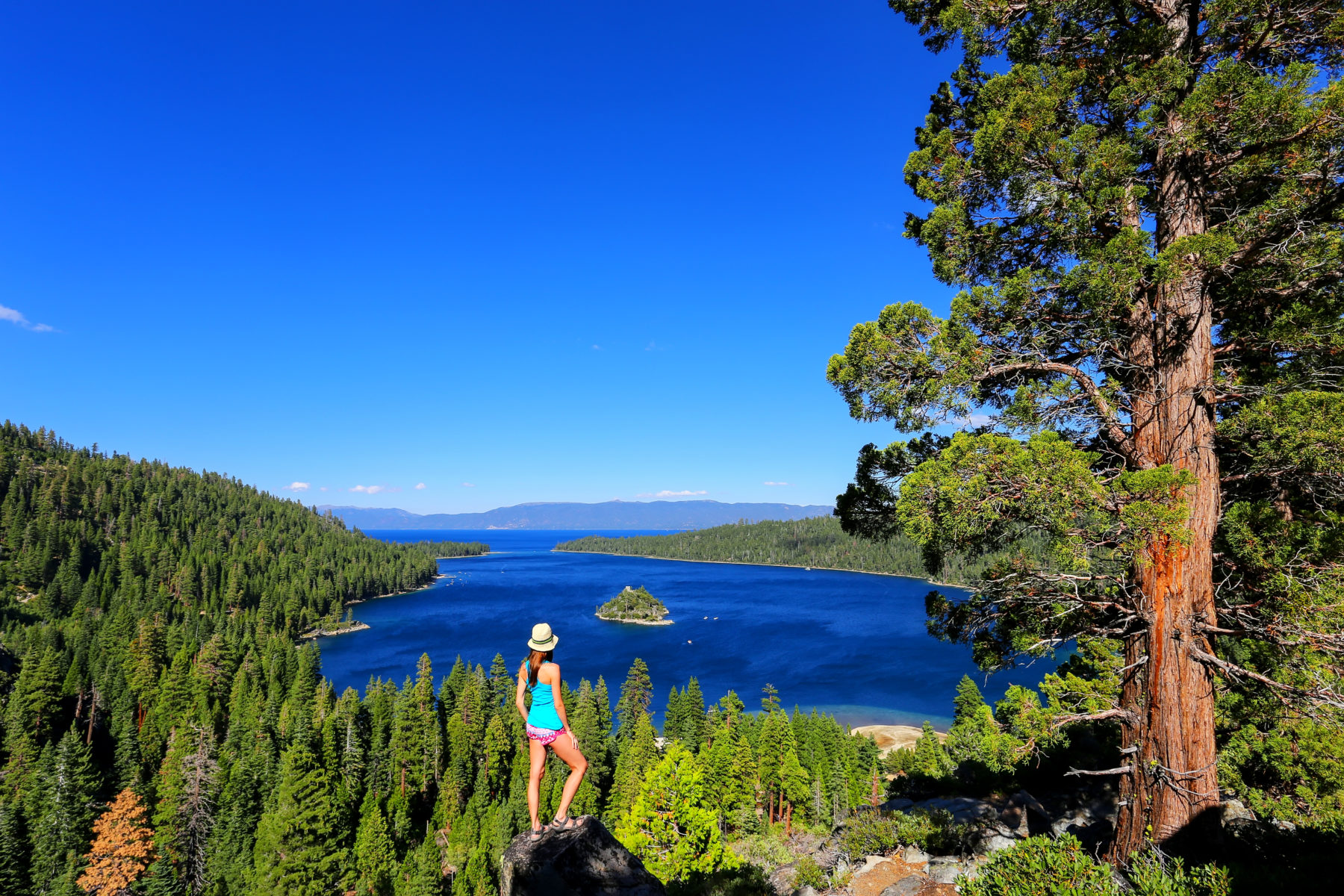 As a kid, I always felt confident jumping from my grandparents’ dock and swimming out to a buoy 50 feet offshore. That is until an irrational deep-end-of-the-pool fear kicked in one summer after I asked Poppy how deep the water was.

“Immeasurable,” he said, fanning a lifelong rumor in my family that this inland sea’s real depth had yet to be discovered.

I gulped. I’d later learn that Lake Tahoe is, in fact, the second-deepest lake in the U.S., with the deepest part measured at 1,645 feet. As an adult, it’s not the depth that bothers me, it’s the temperature, and for any similarly minded warm-water wimps, getting in the 65-or-so-degree water will be a true challenge.

Getting on the water, however, is a breeze. There are sightseeing trips aboard the 312-passenger Tahoe Queen, an iconic paddle wheeler, and private outings with Lake Tahoe Boat Rides that are captained by knowledgeable guides. Self-propulsion kayaking and stand-up paddleboarding are more popular than ever, family-friendly, great exercise and superb ways to explore the rocky inlets and beaches carved into the shoreline.

During our visit, my husband and I booked a lunch cruise with Lake Tahoe Bleu Wave. Their 70-foot yacht proved to be an ideal vessel from which to experience scenic Emerald Bay and its oft-photographed Fannette Island, two of the area’s most popular picturesque attractions. 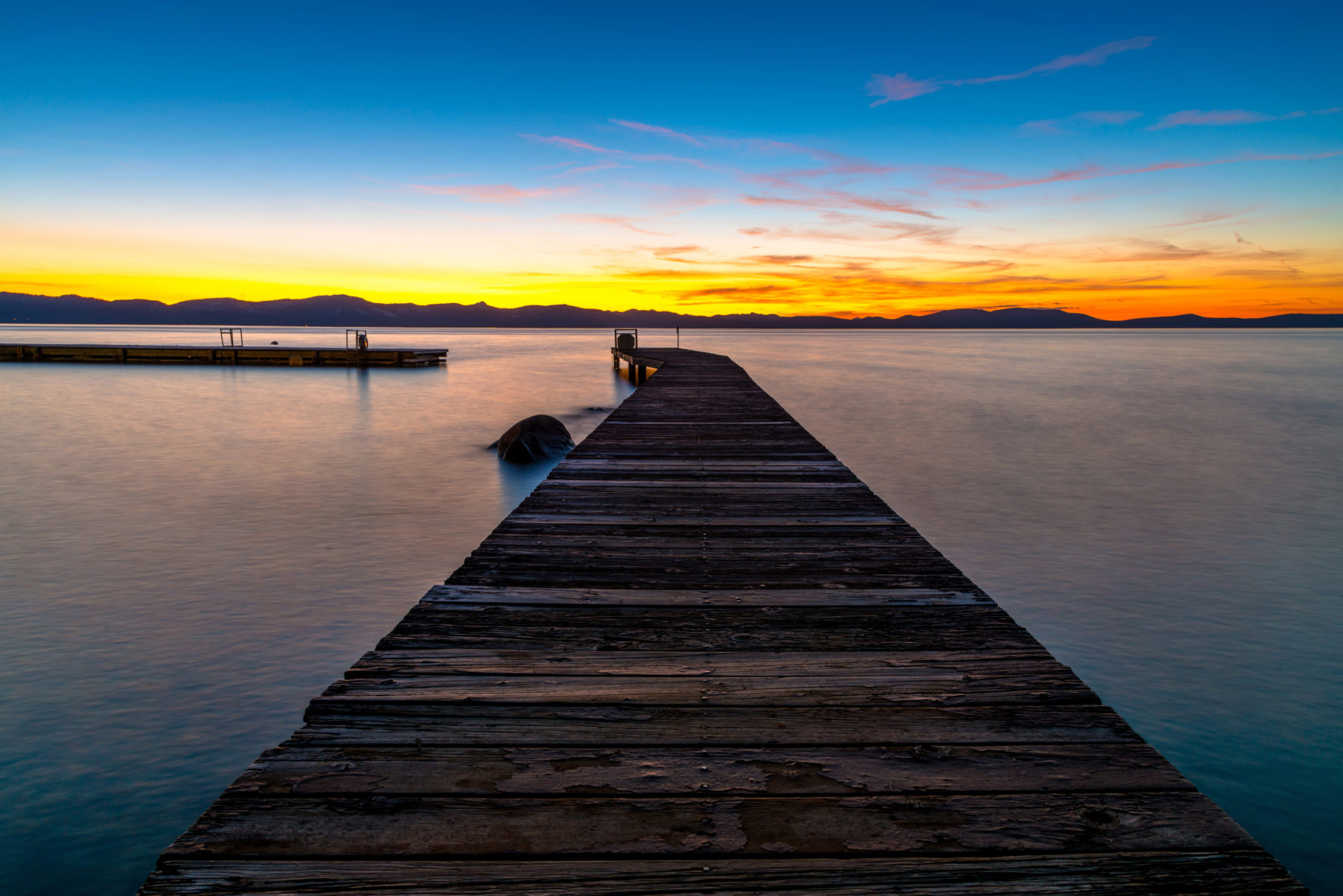 Before our departure, we stopped by my grandparents’ former house, knocked, but no one answered, so I left a note and went around back.

The dock was still there, jutting out from the beach. I scooped up water in my cupped hands and took a sip, then picked up a flat stone and sidearmed it across the surface. Plop-plop-plunk. I still had it. Back on the wooden deck, I looked upward and took a deep breath of pine before walking to the car.

Just a month before our trip, I’d been reminiscing with my dad and had told him about how I wouldn’t sleep on that deck as a kid because of the bats. “There were no bats,” my dad confessed. “In the forest, sure, but not around the house. That was just Poppy having some fun with you.”

Forty years later, Poppy had got me again. And from somewhere above the deep blue of The Lake of the Sky, up there in those pure and fine clouds, I think I heard his cackling laugh anew.

This article originally appeared in the summer 2016 issue of the North America edition of Interval World magazine, published by Interval International®, Inc., an indirect subsidiary of Marriott Vacations Worldwide Corporation. Any re-use of this content, or any portion of this content, is strictly prohibited. All rights reserved.