When I traveled to Spain for the first time, I planned to visit a friend. Naturally, she asked me what I wanted to do while I was there.

“Eat, of course,” I answered, as if it weren’t obvious.

Sure, there would be streets to wander, architecture to admire and beaches to stroll, but I was most interested in the food — tapas, to be specific. 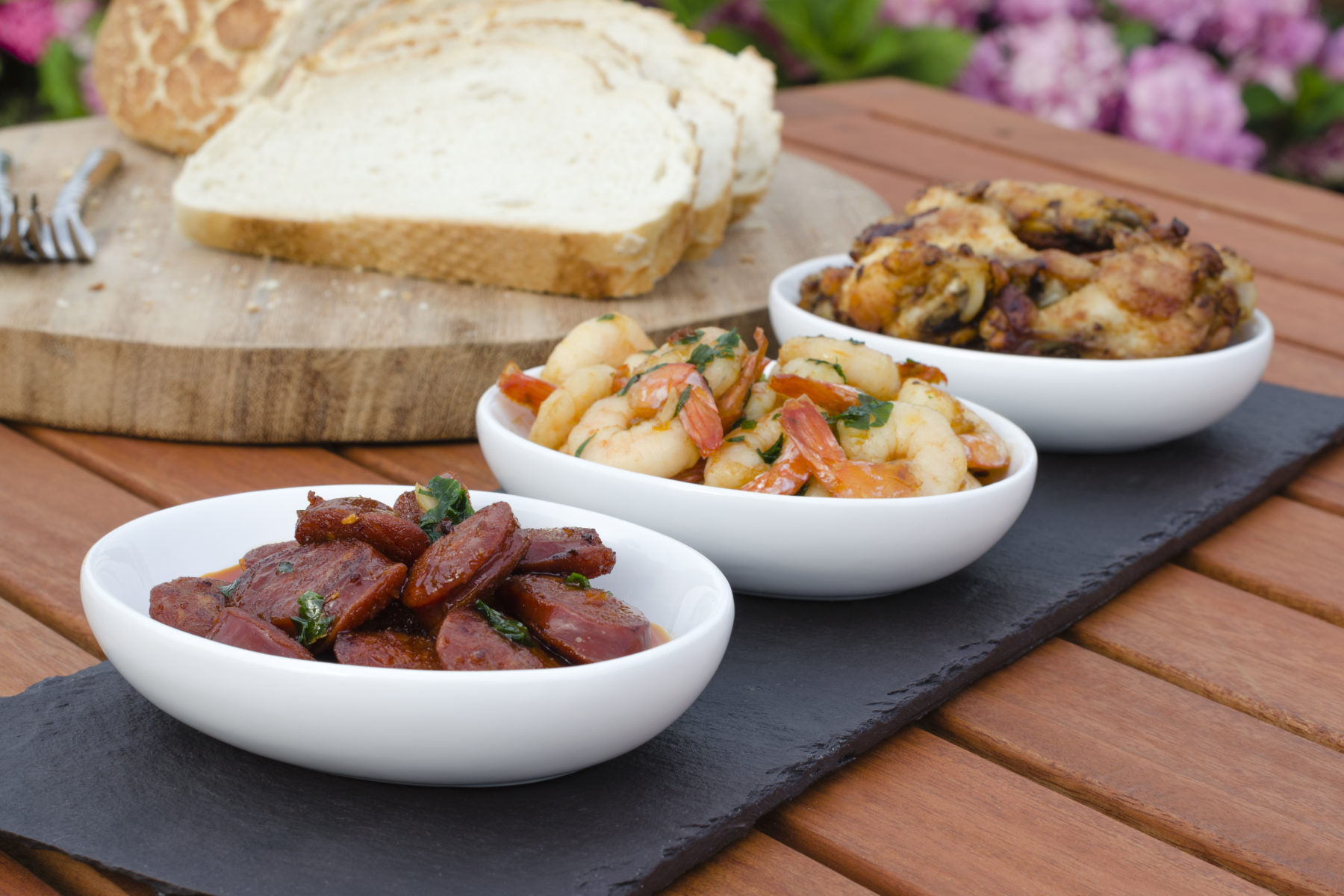 A Little Lesson on Small Bites

When I was little, my parents would create a “variety plate” for my sister and me when we went out to eat. They would order two meals and give us both a bit from their entrees, letting us sample many flavors. So I was disappointed when I grew up and realized that adults have to choose just one dish. While I circumvent this notion by sneaking bites from friends and ordering appetizers instead of main courses, discovering tapas changed my culinary life.

Tapas are small bites, an idea that originated in Spain and expanded around the world. Instead of ordering one large dish, you order several small portions, allowing you to sample a wider variety of flavors. 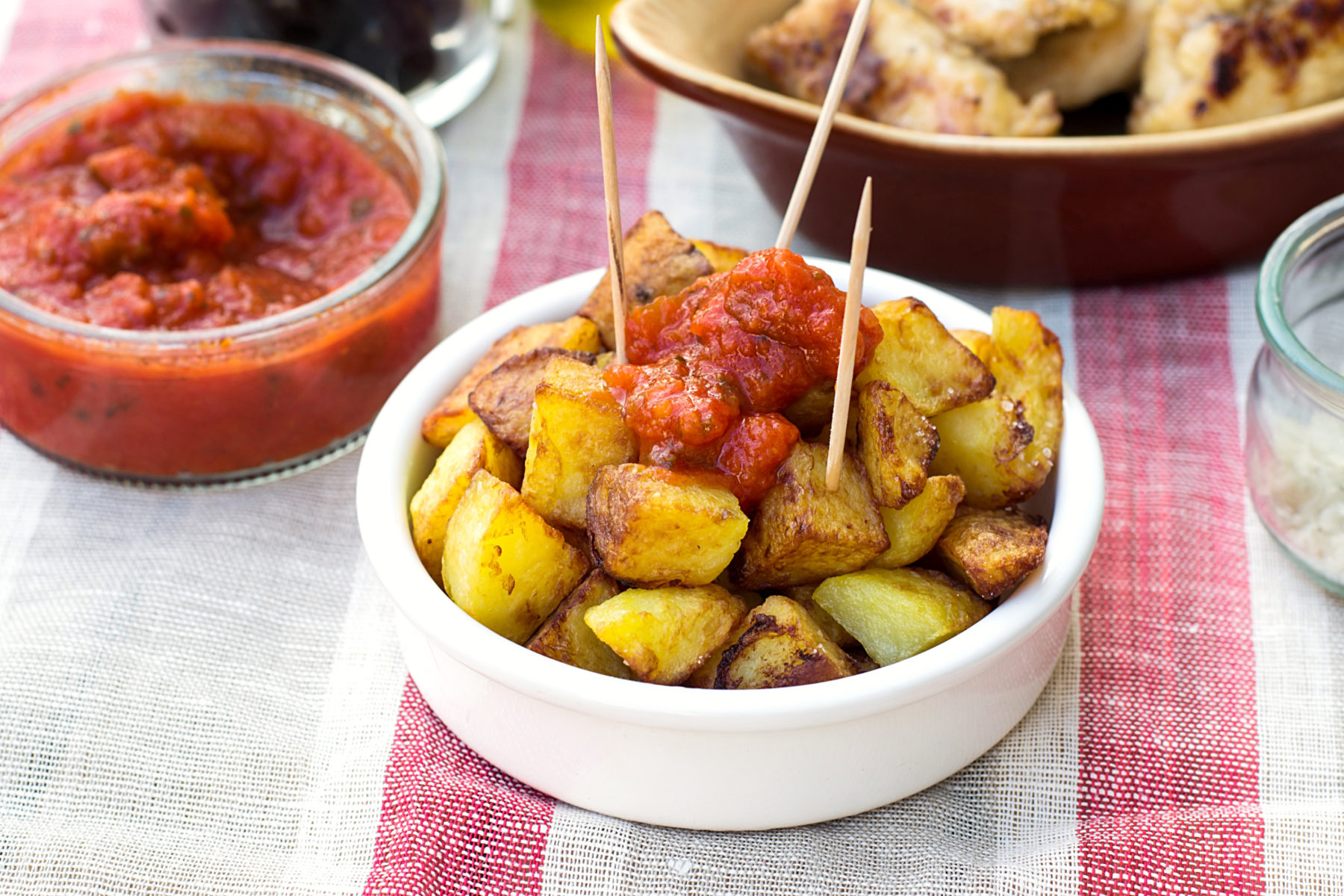 The word tapa literally means “cover” or “lid” in Spanish. There are many origin stories, ranging from a clever bartender placing a saucer over a drink to keep out the flies, to tavern owners realizing that if they served a small snack, people would stay and drink longer. However the trend started, it’s now ingrained in Spanish culture.

Olives and cheese are common tapas, as are cured meats like chorizo and jamon Iberico — my favorite. Hot dishes are popular too, like croquetas (fried balls of goodness) and patatas bravas (fried potato squares topped with a spicy tomato-based sauce). Each region offers its own flavor profiles, and by traveling around the country sampling dishes, I created a truly tasty tour. Here are the tapas that you should seek out in each region of Spain: 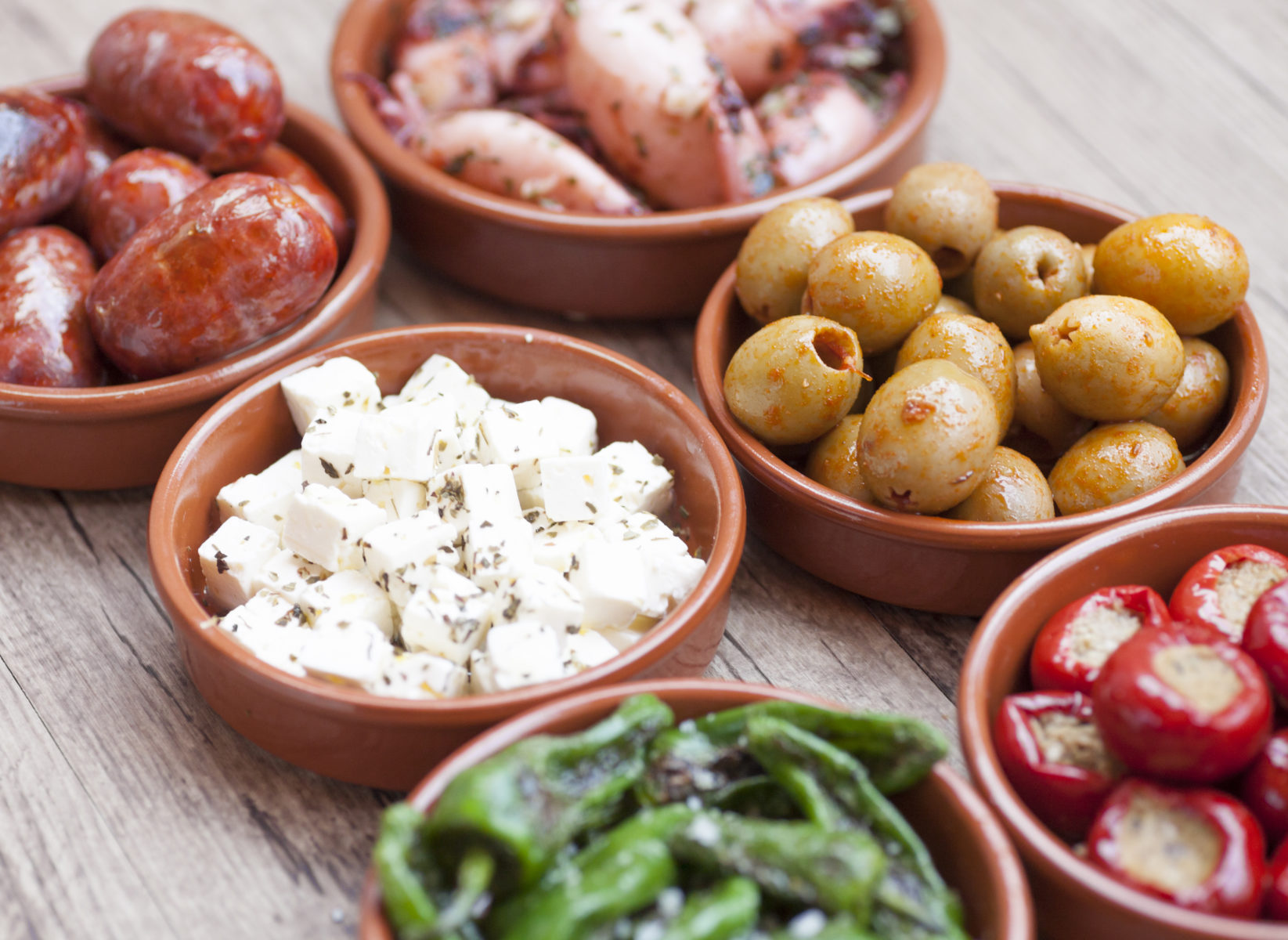 Known as the birthplace of tapas, Andalusia is home to several noteworthy destinations, including Malaga, Granada and Seville. It’s in this region of Spain that I most often enjoyed a complimentary plate of olives or a small cup of gazpacho delivered with my drink. Close to the sea, you’ll find super fresh seafood lightly prepared, like fried calamari, alongside traditional tastes like marinated pork loin and ensaladilla rusa. Also known as Olivier salad, this is a Spanish take on a popular Russian-style potato salad.

While places in Andalusia often provide complimentary tapas, this is not universal across Spain. In fact, most regions feature tapas on a menu, and you pay for it like any other dish. To sample the flavors of Andalusia in a gourmet setting, I suggest going to Restaurante Casa Maria, one of Malaga’s best culinary destinations. 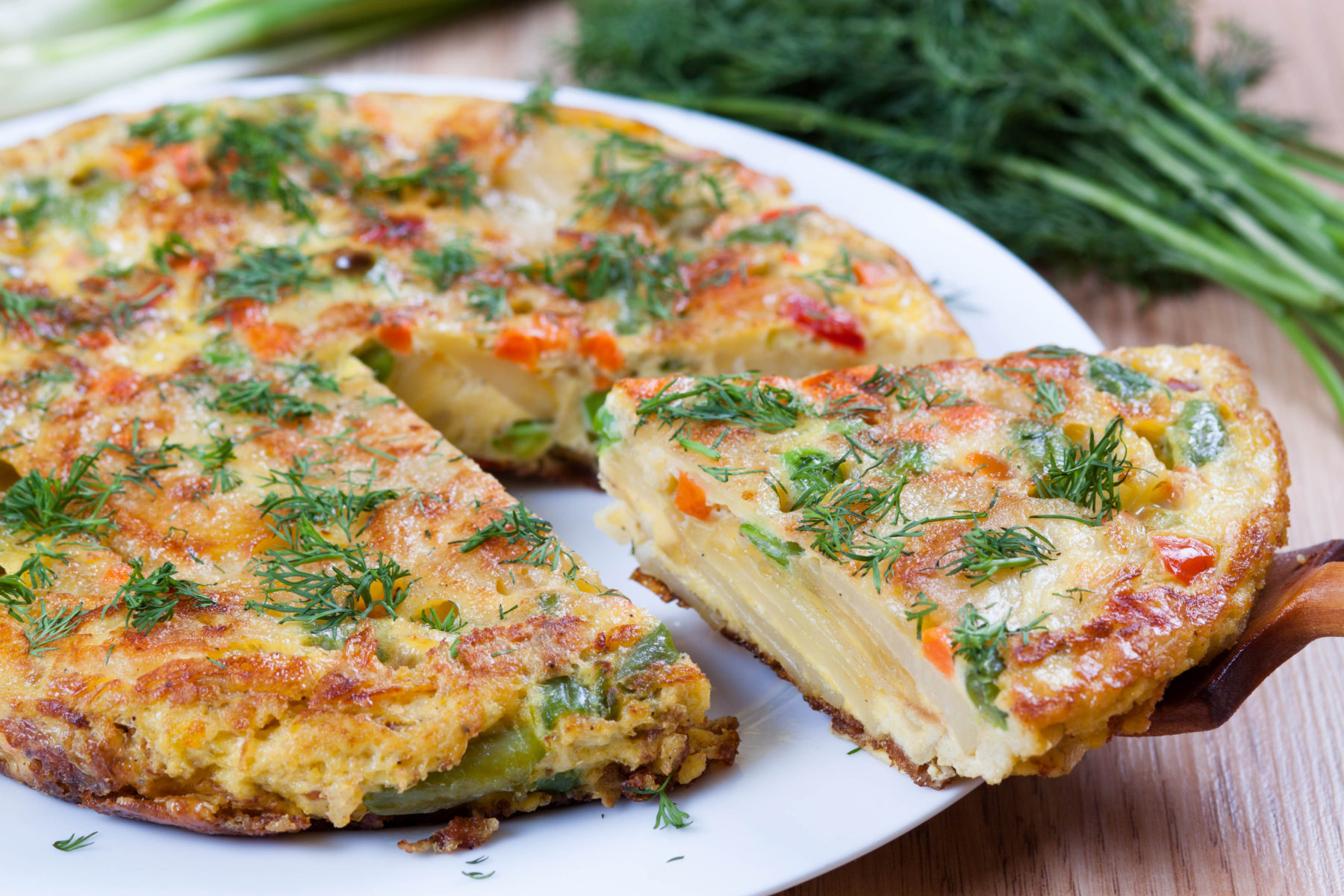 Galicia is home to two famous spots, Madrid and Santiago de Compostela (the end-point of the Camino de Santiago, a Catholic pilgrimage route). It also features seaports and farmland, along with ubiquitous food offerings unique to the region.

While I was there, I ate my weight in tortilla de patatas, a type of potato omelet cut into triangles. I also enjoyed the empanadillas, which are miniaturized siblings of empanadas, a popular pocket pastry that originated in Galicia. At the end of a long day of sightseeing and wandering, I would seek out and savor pimientos de Padrón, a crispy, savory snack made from stir-fried and salted local peppers. 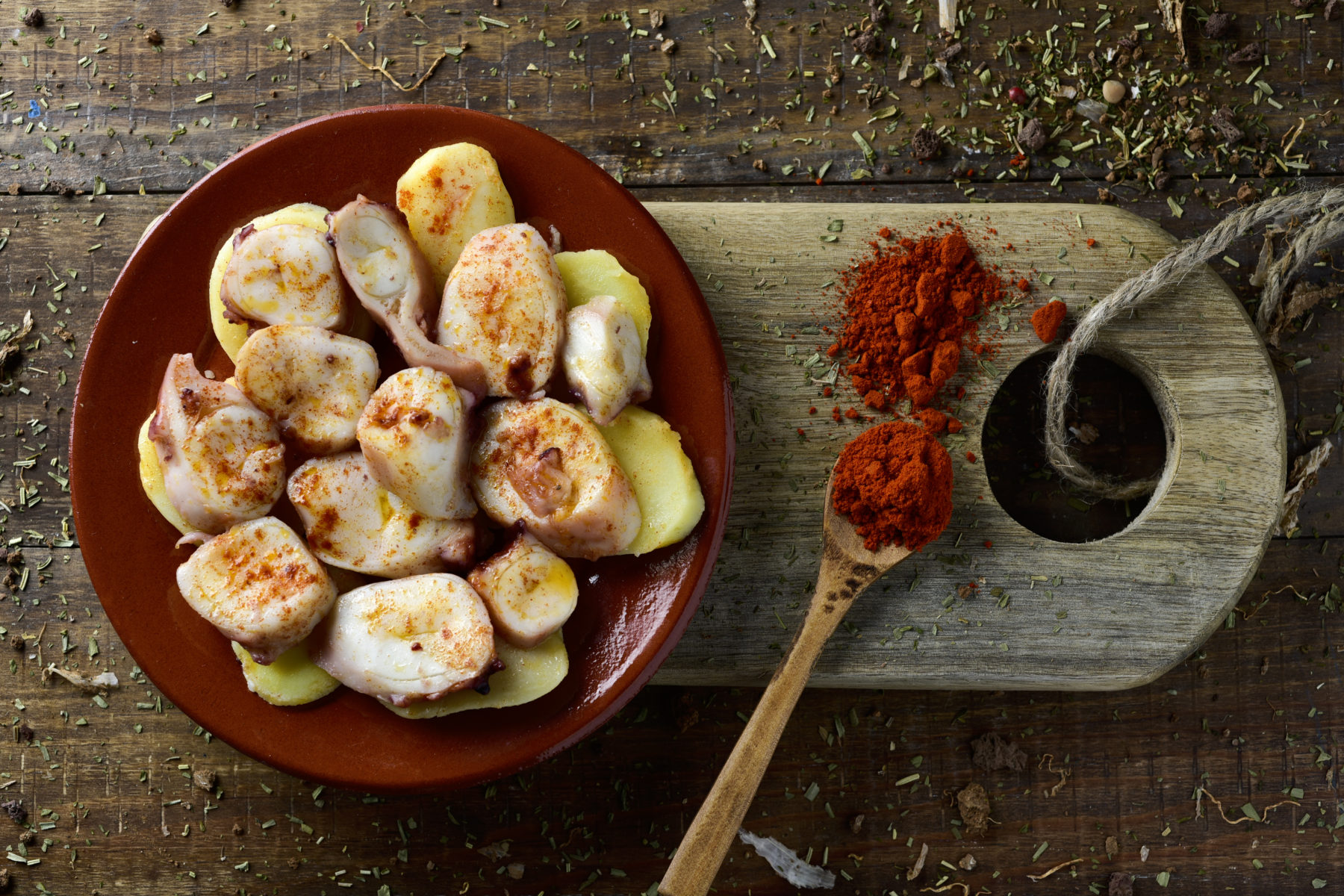 Famous the world over, Barcelona and its surrounds are the highlight of Catalonia. I loved the wide variety of seafood in the tapas here: oysters, octopus and shrimp are all popular offerings.

My friend would order gambas a la plancha — whole, unpeeled shrimp that are salted and then grilled. I usually opted for pulpo a la gallega, octopus seasoned with paprika. If you’re feeling particularly adventurous, you could order the cod or pig’s feet tapas; while I’m not adverse to a trotter at times, I preferred devouring as much fresh fish as I could.

If you’re with a group, look for “racións,” which are larger portions of the same tapas and are easier to share. 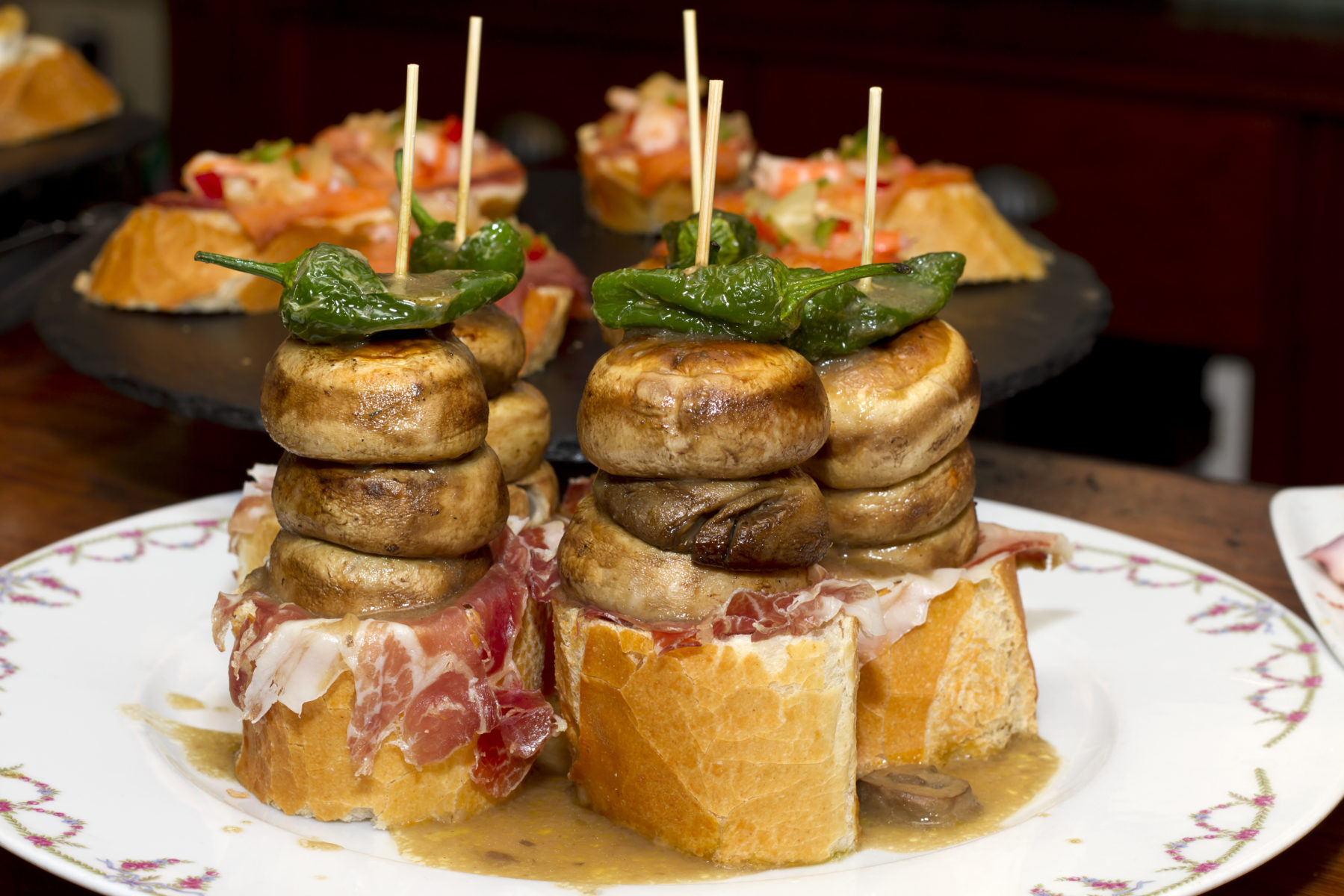 Basque Country is a world unto itself: It has its own distinct flavor, a unique language and its own version of tapas, called pintxos. Bars and restaurants usually serve these small snacks on a slice of bread and held together with a toothpick.

My friend taught me the surprisingly simple protocol for eating, enjoying and paying for pintxos in this region of Spain. Simply peruse and select your preferred pintxos — from sardines on toast to jamón-wrapped dates. Then, enjoy. At the end, servers count the number of toothpicks on your plate and charge you accordingly. It was surprising how much we consumed as we laughed and ate!

Spain is ahead of the game when it comes to catering to different diets. Many menus highlight gluten-free options and most kitchens can work around lactose intolerance and other dietary restrictions. Simply communicate your dietary restrictions with your server, or call ahead to confirm.