A descendant of Sedona’s namesake pioneer shares some of her favorite places, art, and cultural attractions of this popular Arizona destination.

More so than perhaps anywhere else on Earth, in Sedona, the natural and created art complement one another. In some places, a glittering skyline might mar the nearby rolling hills, or an impressive edifice could camouflage an otherwise lackluster landscape. Not here. When it comes to Sedona arts and culture, you don’t need to sign up for a tour. Just drive, and you’re on one. 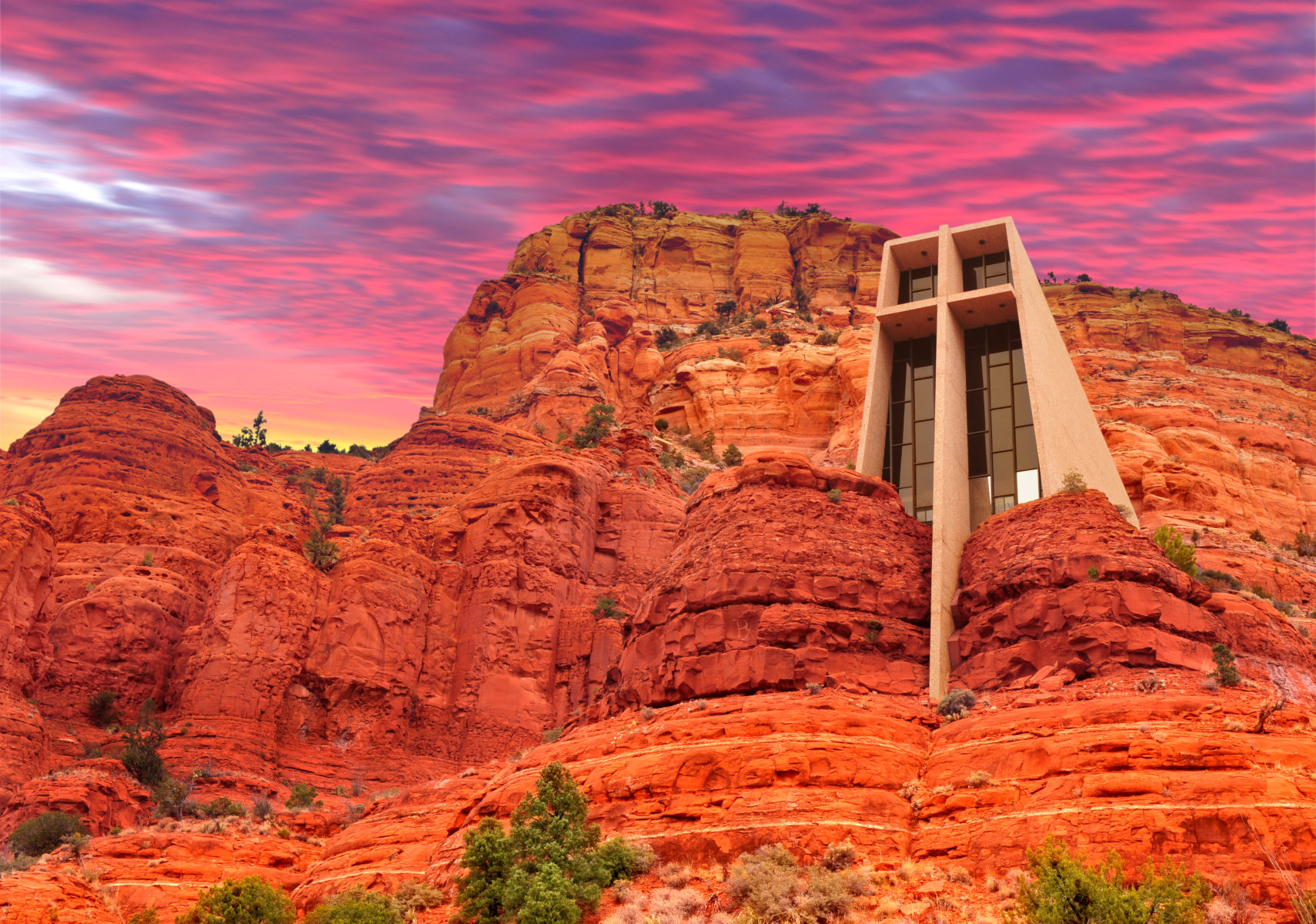 After you exit Interstate 17 onto Highway 179, you come first to the Village of Oak Creek. Hotels, shops and galleries occupy what was vacant land until the recent past.

Between Oak Creek and Sedona, you’ll come across a piece of famous architecture just off the road that lets you know you’re getting close to your final destination. Designed by a student of Frank Lloyd Wright more than a half-century ago, the Chapel of the Holy Cross seems to rise directly out of the sandstone. It’s a perfect example of how organic a piece of art can be.

The story goes that Marguerite Brunswig Staude (Wright’s student) was inspired after viewing the Empire State Building and noticing the manifestation of a cross amid the steel and glass and other unassuming construction materials. After several failed attempts to find a place to build, she moved to Sedona and realized that she had delayed the design because it belonged in these red rocks.

Ralph Waldo Emerson’s remark that “beauty is God’s handwriting — a wayside sacrament,” certainly applies to the Chapel of the Holy Cross. About 90 feet high, the cross itself is backed by windows, so when viewed from outside, it’s a silhouette, and from the inside, an ode to the eloquent simplicity of shape. Furnishings are deliberately spare, so as not to spoil the visitor’s vision. 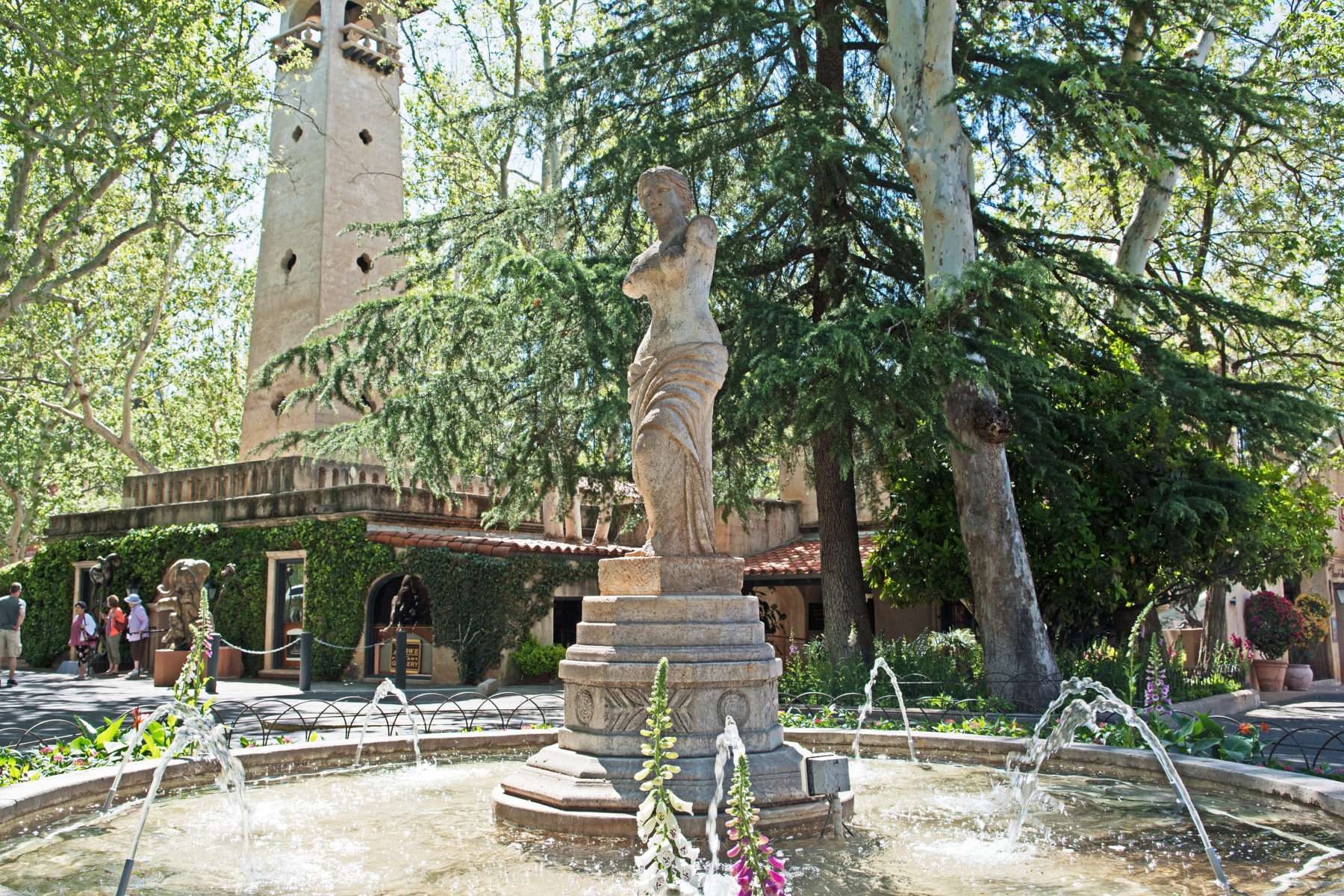 Where Highway 179 crosses Oak Creek on your way into town is the gallery district. At the base of Schnebly Hill Road, the Hozho Center and other galleries feature an ever-changing collection of outdoor sculpture to welcome visitors. Massive animals, realistic figures and sometimes fanciful blends — a giant Hopi bear, a stalwart pioneer couple or an evocative bird messenger from the gods — may be on display when you arrive.

Then comes Tlaquepaque Arts & Crafts Village, one of Sedona’s first commercial artistic enterprises. Inspired by the arts communities he had explored on visits to Mexico, Nevada businessman Abe Miller founded Tlaquepaque — named after the colorful Mexican city just outside of Guadalajara — on the banks of Oak Creek. Art beckons from every courtyard and square, in the form of a statue, a sculpture, glasswork and architecture. As if that weren’t enough, galleries and gift shops offer treasures for every level of buyer.

Since they were tiny, this route has been my children’s anticipated pilgrimage. First, they want to visit Tlaquepaque’s Secret Garden Cafe, which not only has enticing sculptures in its front yard, but fantasy-worthy confections in its bakery case — white chocolate–raspberry torte one visit, mocha-truffle fudge cake another. (Some art can be consumed.) Devouring these delights while surrounded by stained glass and serenaded with the sounds of the fountain delights us all. 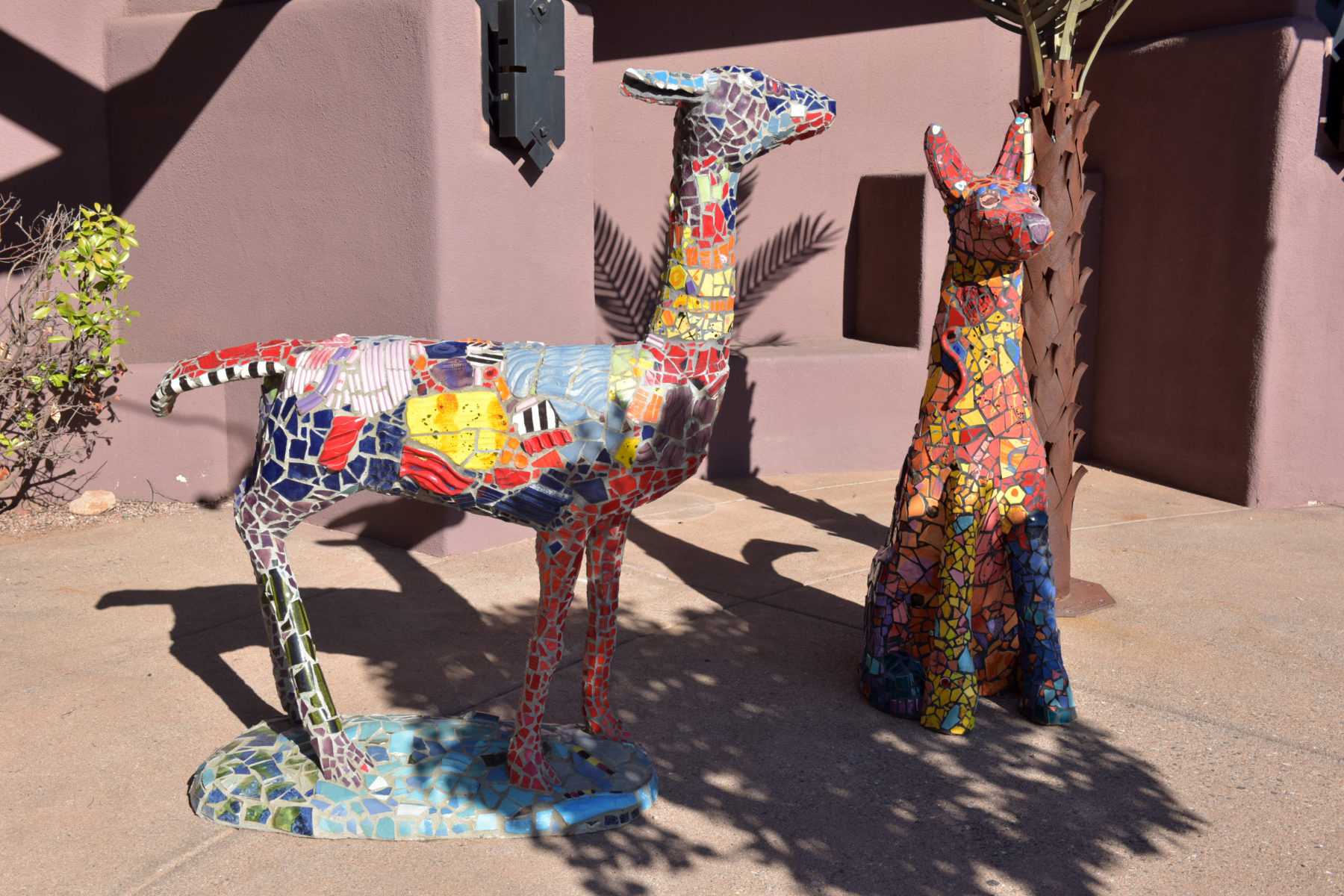 Continuing into town takes you through the rest of the gallery district, but don’t stop here. There are showrooms and studios all through Sedona and beyond, and remember, not all art can be found on a flat canvas. Some comes on leather goods or other practical pieces, such as purses, blankets, bags and cases adorned with elaborate scrolling, silver studs and fine needlework.

The Sedona Historical Society and Heritage Museum is a sanctuary for this and other earlier art. Housed in the one-time residence of pioneers Walter and Ruth Jordan, the much-expanded farmhouse is a treasure trove of artifacts, including exquisite embroidery and handicrafts. My great-grandmother from Sedona didn’t paint; she expressed her creative impulses in delicate crochet, some of which her granddaughters have resurrected and given to the museum. And the first painting I recall seeing of her, which always hung in my grandfather’s study, is a picture of Sedona in front of the red rocks with a gentle expression. Today she looks out at museum visitors with the same candid gaze. 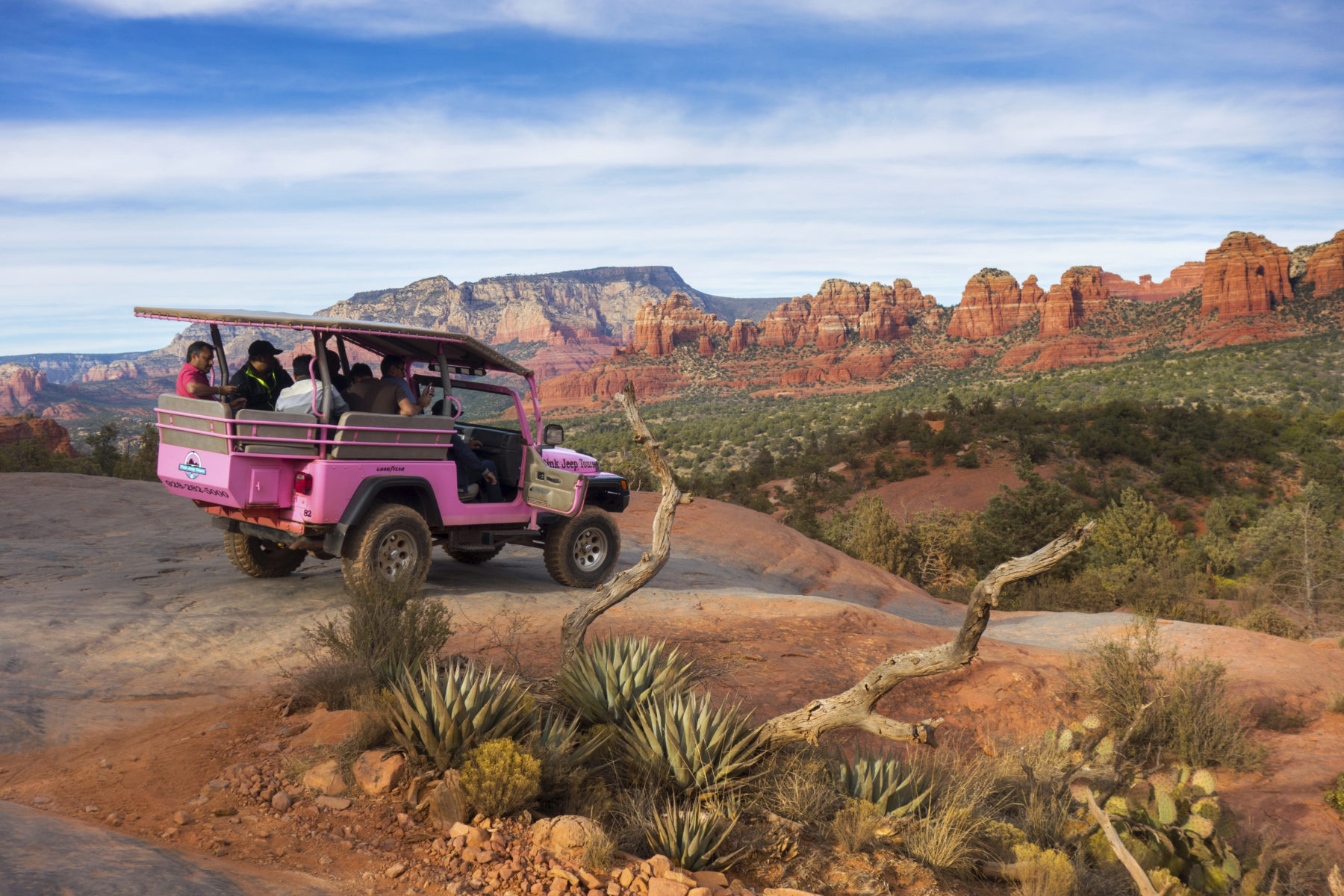 In uptown Sedona, the lasting legacy of a community art project can be found. Outside the Pink Jeep Tours headquarters is Javelinas On Parade, sculptures of a large javelina mother and child. They were cast by Barbara R. Brown, then painted, decorated and embellished by a number of area artists.

Almost across the street is a statue honoring Joe Beeler, regarded as a founding father of the Cowboy Artists of America, and just down from that is another public piece; this one of a couple dancing so joyously it seems her bronze skirt may ripple in the breeze.

Finally, in the western part of town, there is a statue of Sedona Schnebly outside the public library. By Susan Kliewer, it depicts Sedona as a young woman, extending an apple as an offering. Obviously, it has a special meaning to me, and I encourage everybody to stop by for a look. And really, as the reluctant yet flattered model of that particular work of art, this is where my pilgrimage began.

And I promise, yours will commence as soon as you arrive. Whether it’s the sound of trickling water in a huge fountain outside a resort or the shades of cerulean, coral and cerise reflecting the sunset in a stained-glass creation, or an enigmatic face cast in bronze that piques your fancy — artistry in all forms abounds in Sedona. You don’t have to go looking to find it. It finds you.

Where to Stay:
Marriott’s Canyon Villas

This article originally appeared in the spring 2012 issue of the North America edition of Interval World magazine, published by Interval International®, Inc., an indirect subsidiary of Marriott Vacations Worldwide Corporation. Any re-use of this content, or any portion of this content, is strictly prohibited. All rights reserved.