Perhaps Ireland doesn’t immediately come to mind when you’re considering a hiking destination — but it really should. Why is it the ideal place to immerse yourself in the great outdoors? Let me count the ways…

First, as you may have heard, Ireland is stunningly gorgeous and green, with mountains, cliffs and white sand beaches. Second, the country is adorned with walking trails and national parks galore. Third, the wilderness is blessedly free of scary animals, although you may encounter the occasional deer, sheep or adorable miniature horse (my favorite). 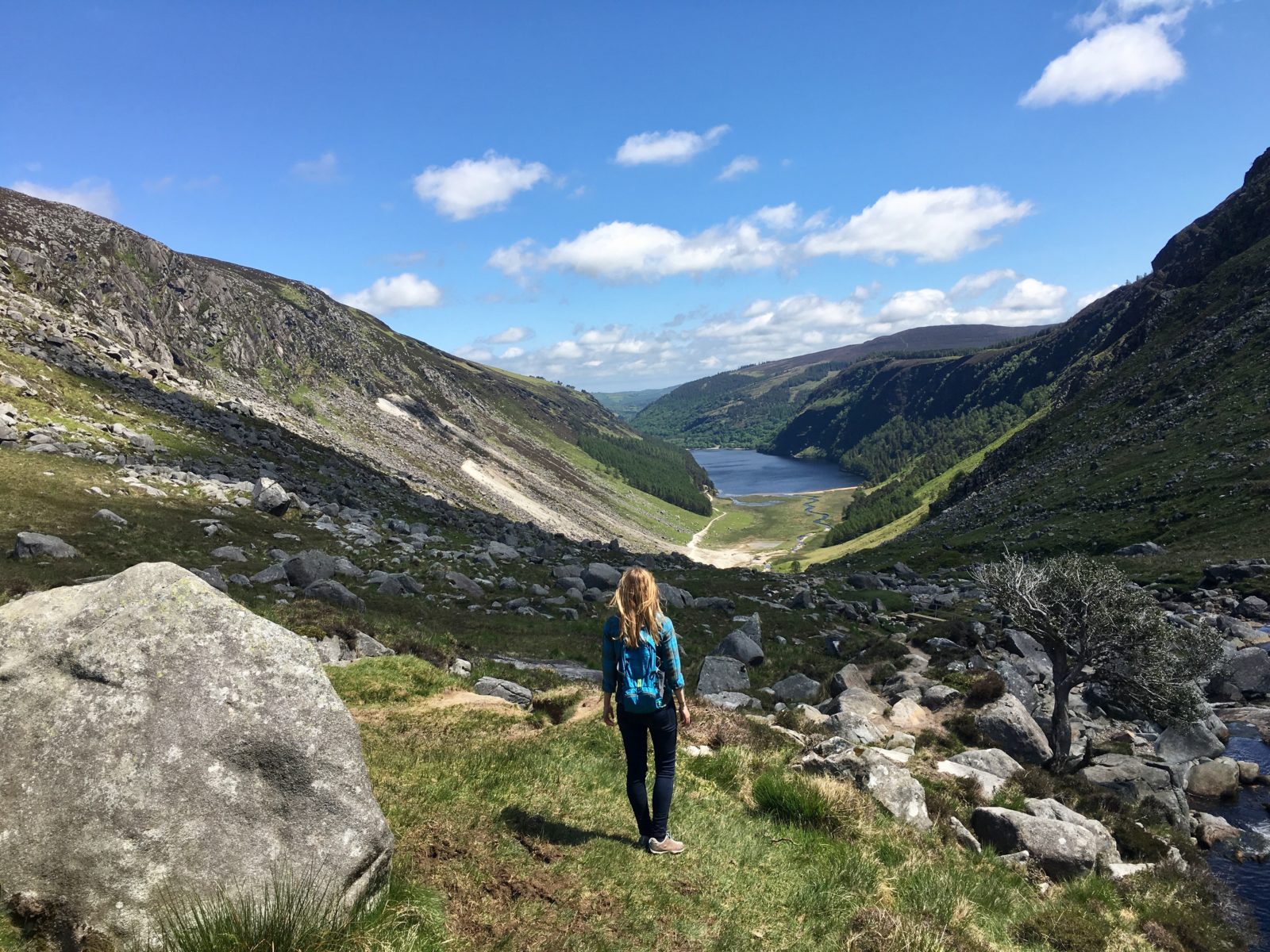 For all those reasons, I decided to go on a nine-day hiking holiday in Ireland, hoping to spend time communing with nature and maybe an Irish pub or two. After exploring the bogs and bens of Connemara National Park and the quaint farm lanes of Inishbofin, my last stop was the Wicklow Mountains.

Situated south of Dublin, Wicklow Mountains National Park is the largest in Ireland, encompassing nearly 50,000 acres of green, mountainous splendor. I spent several days exploring the area and I recommend staying overnight if you can. But if you’re short on time, at least squeeze in a day trip from Dublin — you won’t regret it. 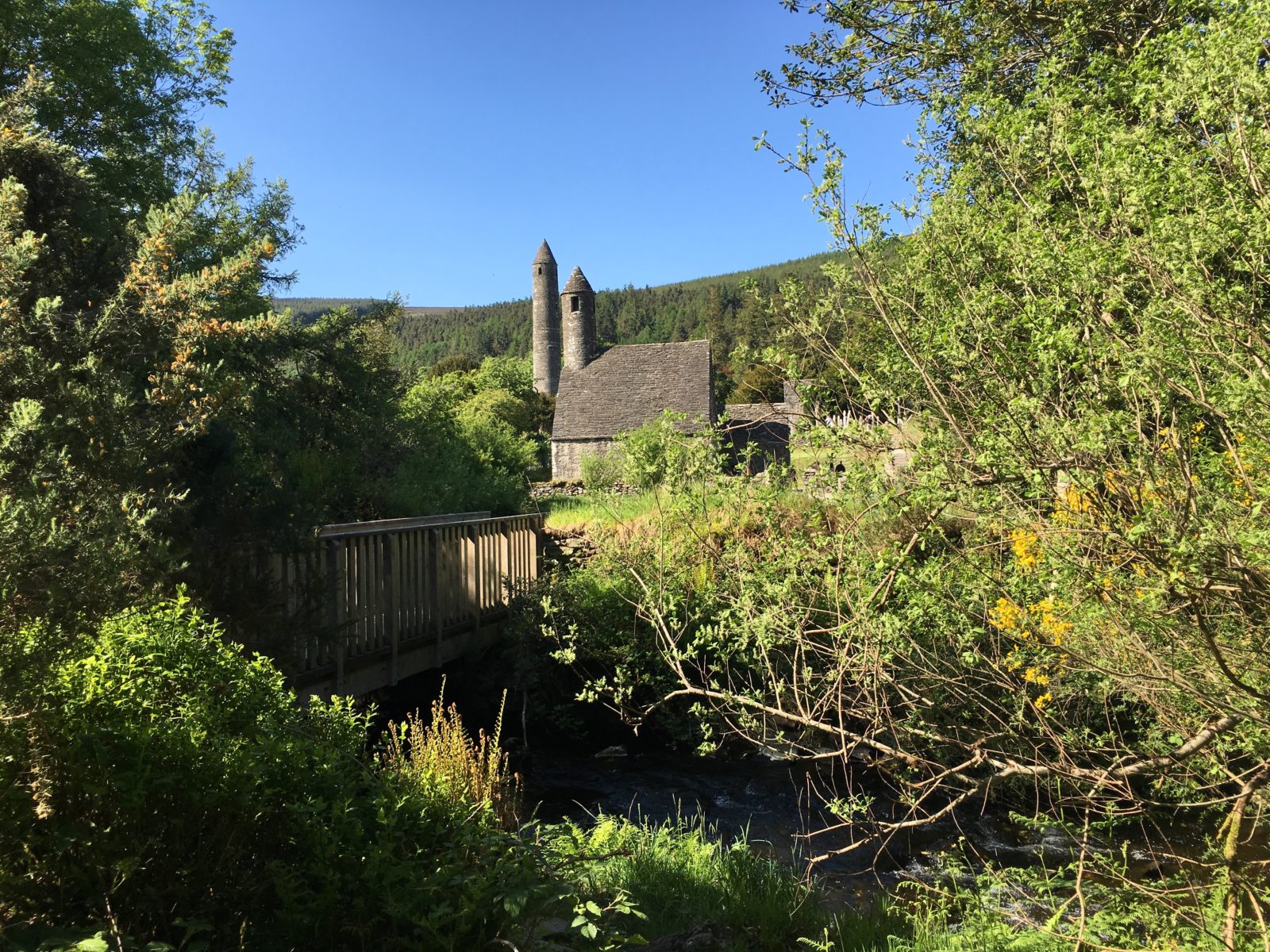 Step back in time at Glendalough.

The picturesque Glendalough Valley serves as the hub of the national park. From the visitor centre, it’s a short walk to “Monastic City” — the ruins of a 6th-century monastic settlement founded by St. Kevin. You can call in advance to book a tour, but I picked up a map and set out on my own. 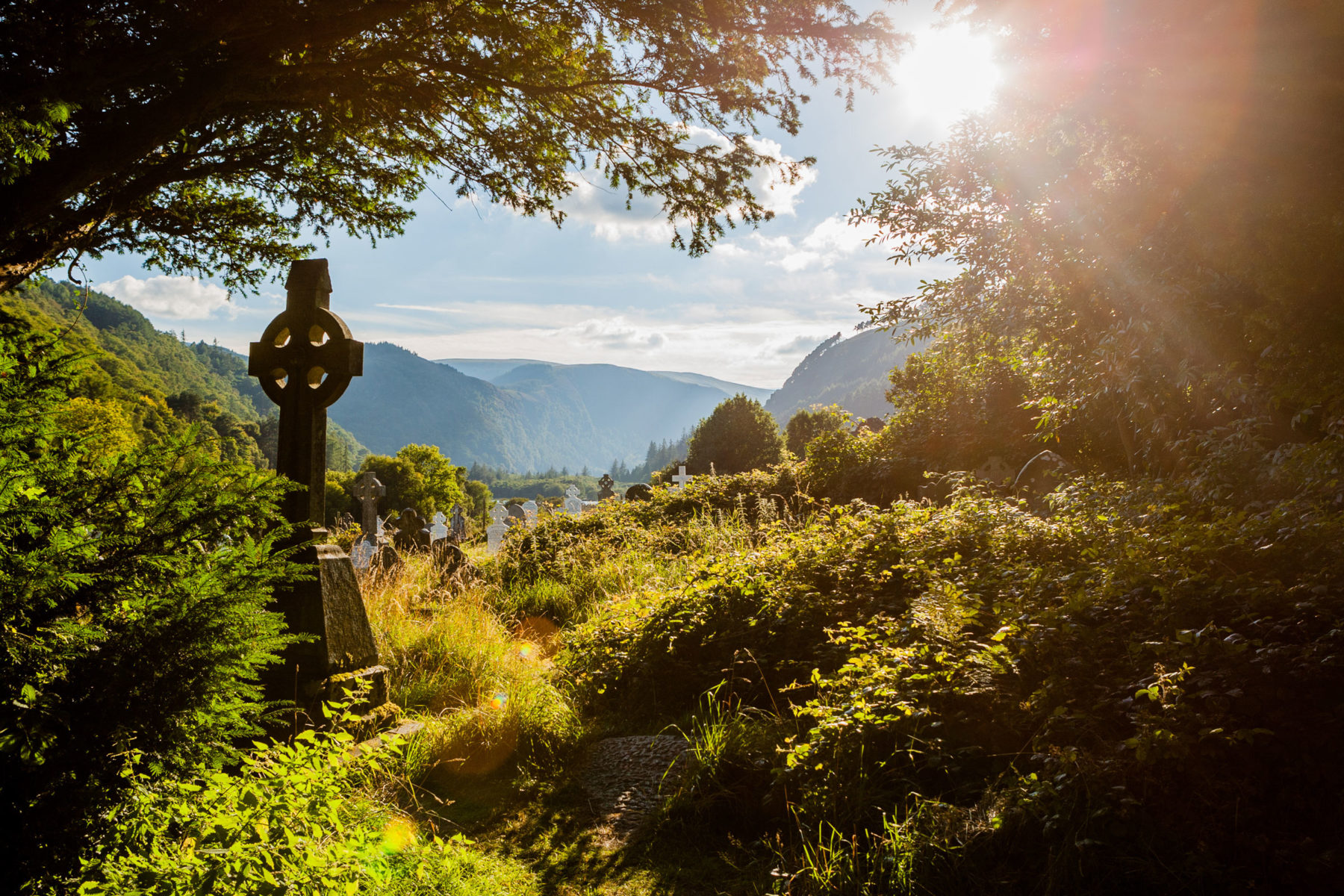 First, I crossed a rustic bridge over a gurgling stream (no, I’m not making this up, it’s really that idyllic). Then I made my way to the historic site in the Lower Valley and wandered around the early medieval stone buildings, including a 30-meter tall round tower. The ancient cemetery surrounding the ruins is beautiful; the gravestones have gently eroded over time until they’ve become part of the landscape. Their presence only deepens the peaceful atmosphere that echoes with history. 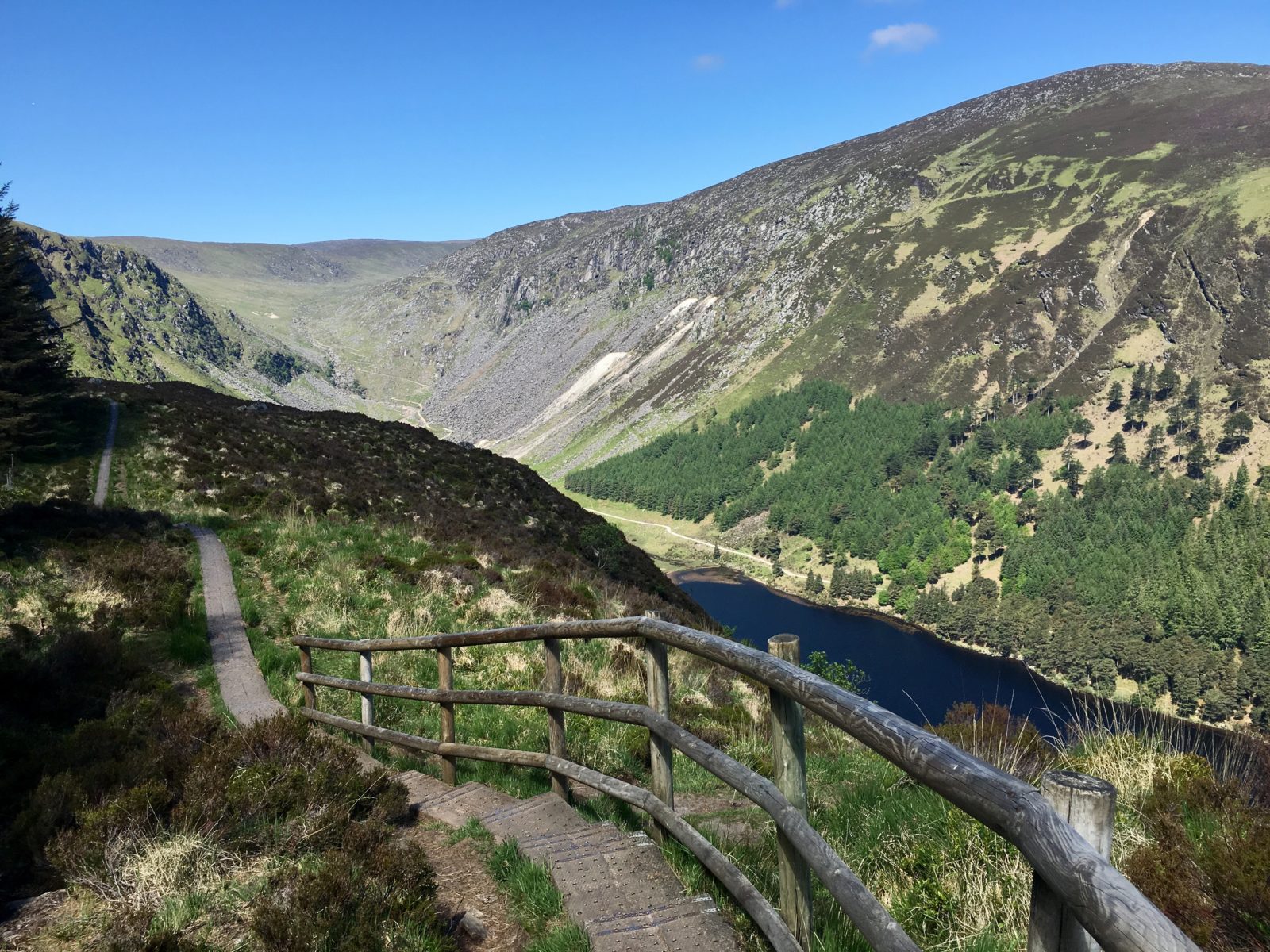 Choose a trail and start trekking.

The valley has nine color-coded trails to choose from, ranging from half-hour strolls to four-hour hikes. At the visitor center, I asked an employee for her recommendation. She suggested that I take the strenuous White Route and that I travel it clockwise — for two reasons. First, it was less crowded, since it involved climbing up more than 600 steps. Second, by walking clockwise, I’d keep the beautiful views in front of me.

I set out in search of the trailhead, passing the Poullanass Waterfall before reaching the aforementioned stairs. While the 600 steps were strenuous, they were  surrounded by an enchanting forest straight out of a fairy tale, which made the ascent more enjoyable. 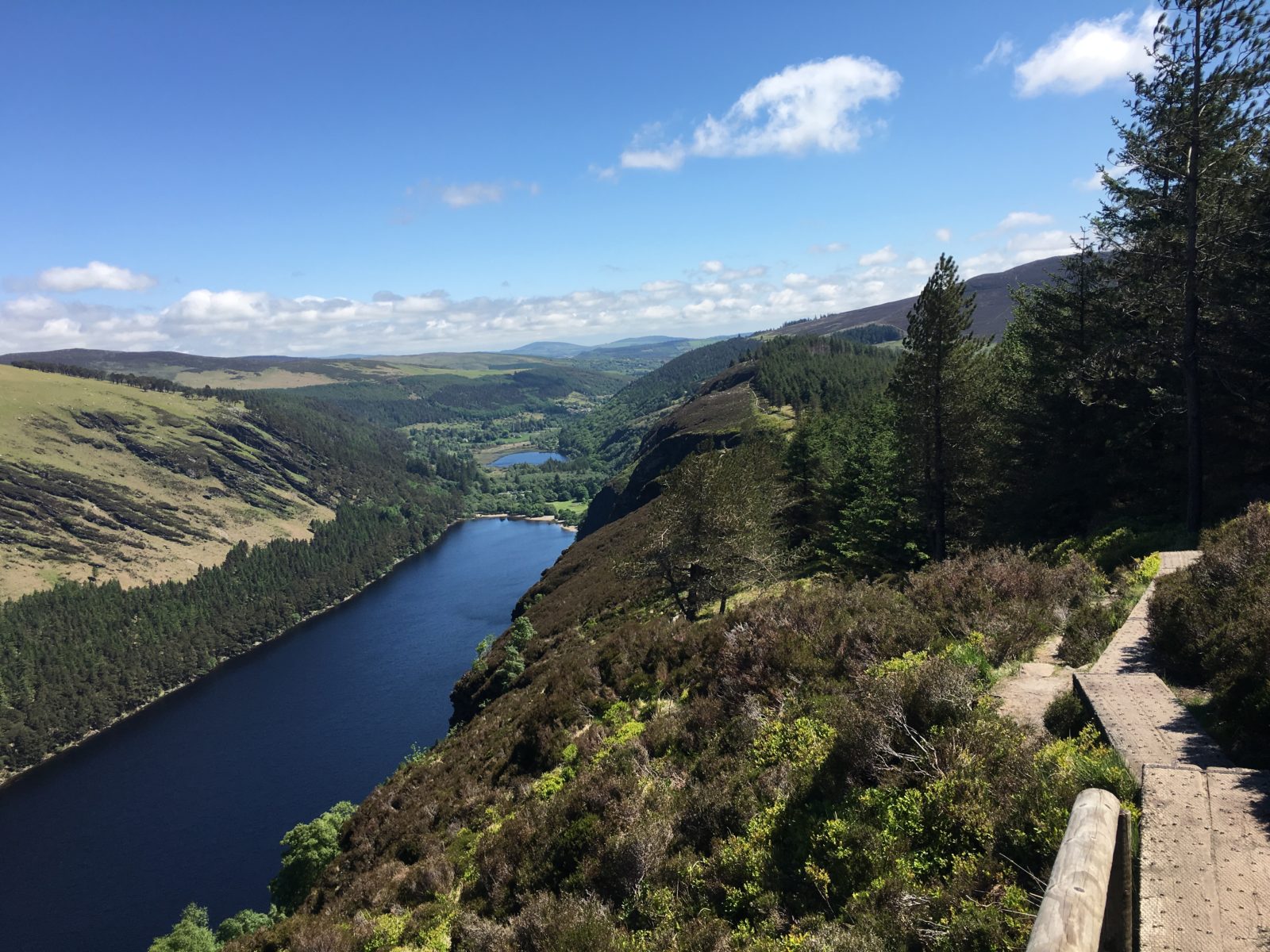 Finally, I reached the top — and hit the jackpot. When I emerged from the woodlands and stood on the top of the spinc (a sort of rounded cliff), I was struck by a spectacular view of the valley below. As I continued walking on the boardwalk toward Upper Lake, I encountered even more stunning views, and even spotted a deer lounging in the grass. 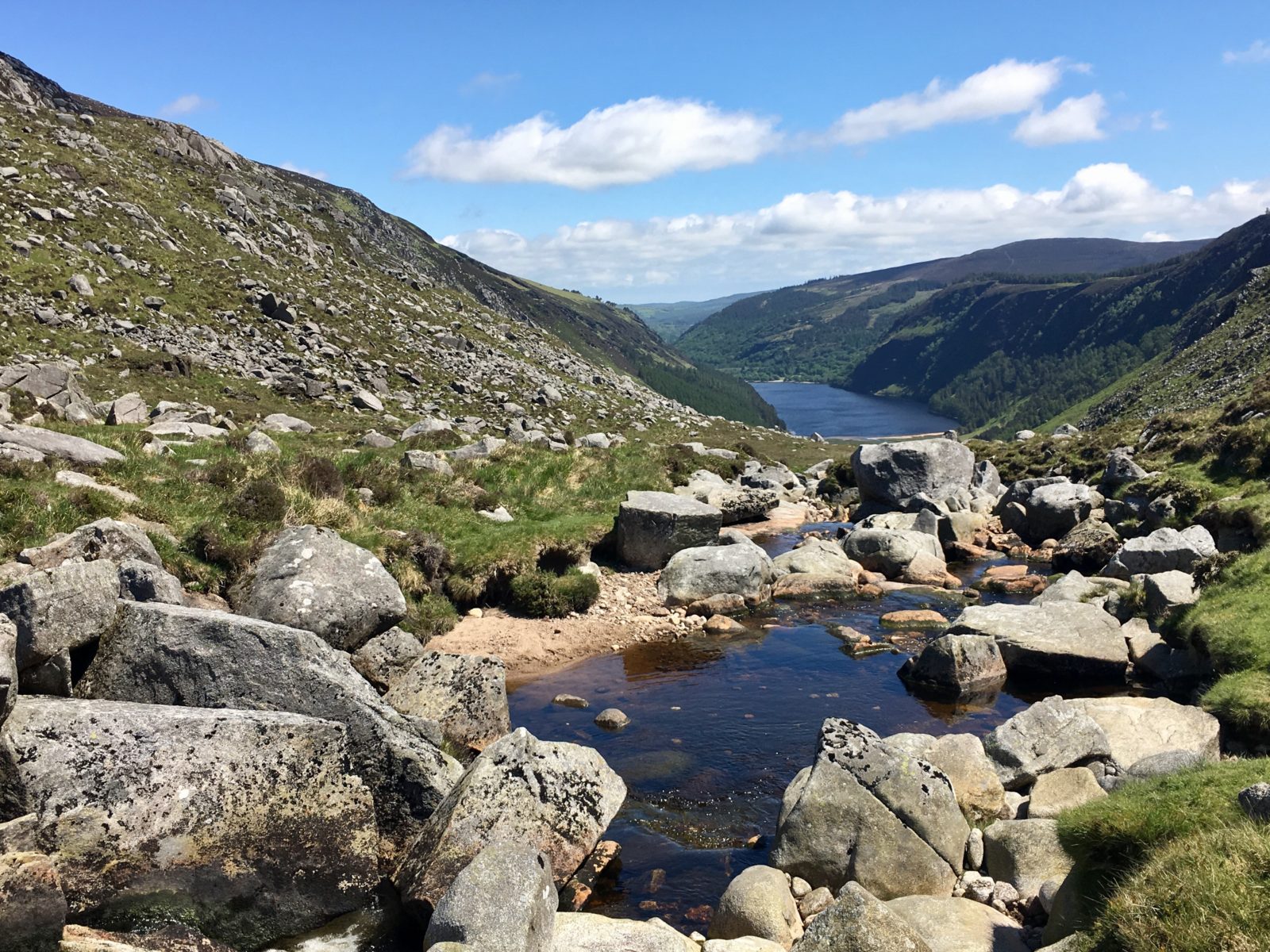 Stroll past rivers and ruins.

Eventually, it was time to walk down into the valley. I descended from the spinc to where the Glenealo River tranquilly bubbles over piles of rocks. Ready for a break, I sat on a boulder by the water, admiring the views and feeling thankful for the beautiful weather.

The second half of the trail consisted of a gravelly path descending into the valley via several switchbacks. Once I reached the bottom, I came across the ruins of Miner’s Village, where mine workers lived in the 19th century. The scene seemed a bit ghostly, as the dilapidated stone buildings were bookended by steep slopes covered with fallen rocks. 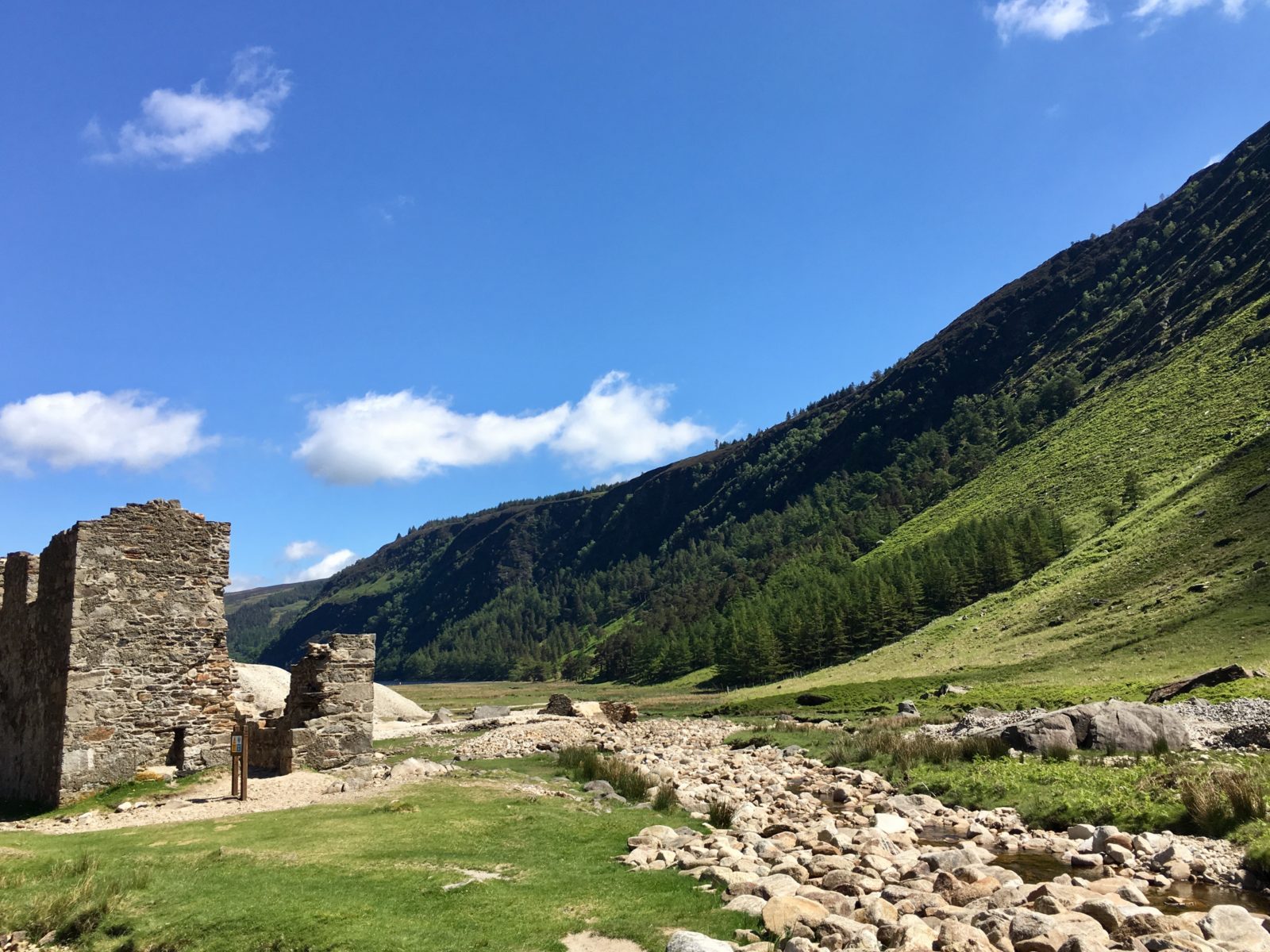 I often had the path to myself as I continued along the shores of Upper Lake. Toward the end of the hike, I was enveloped by a forest of towering, majestic trees. As wind ruffled the leaves and sunlight dappled the ground, I felt like I was in a Maxfield Parrish painting come to life. When I happened upon a dock, I sat for a moment and dunked my feet in the lake. After a day of trekking, it was a relaxing way to take in the gorgeous scenery one last time. 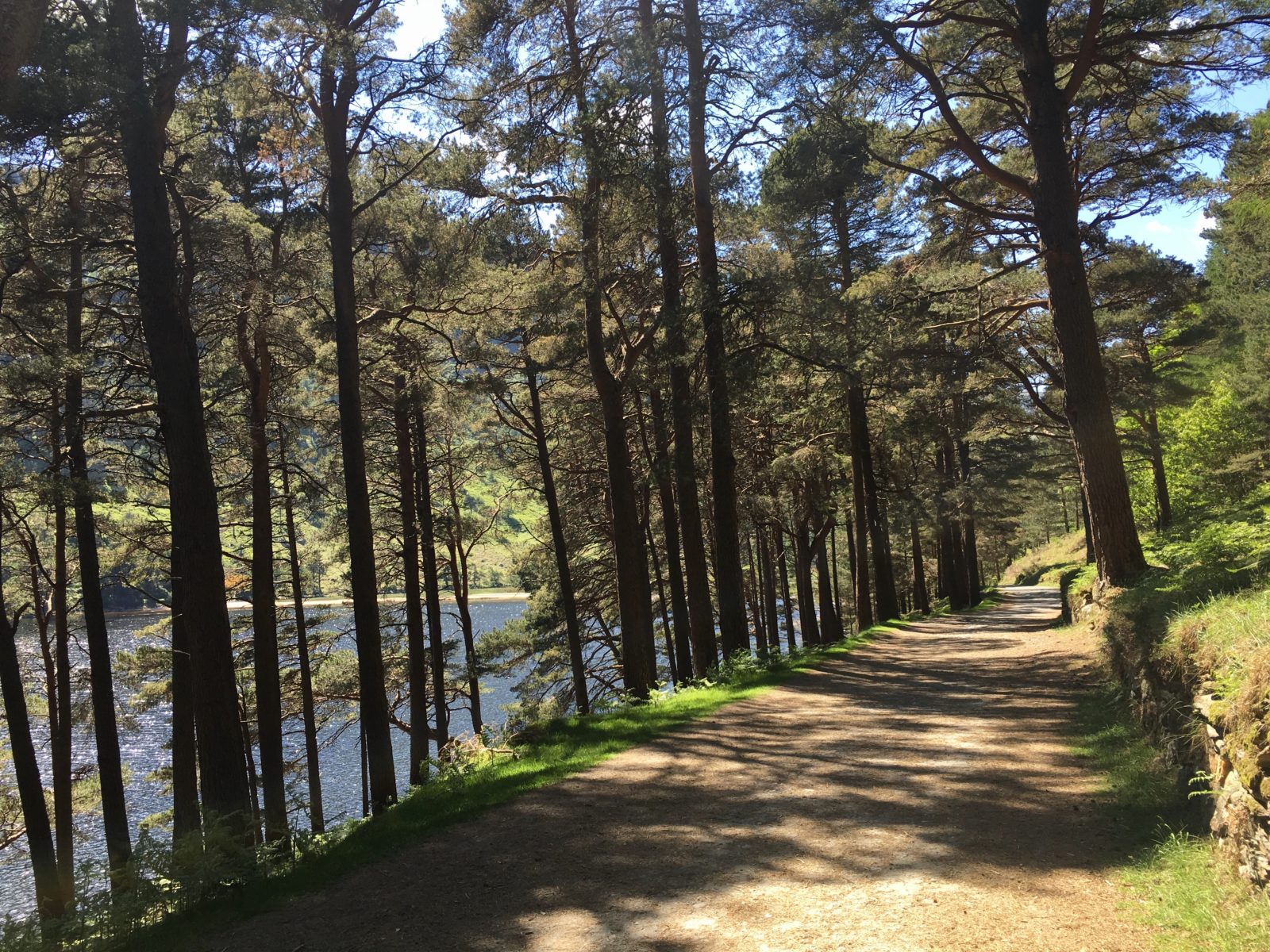 To get to the park, you can rent a car, take a guided day tour or navigate public transportation. I took the St. Kevin’s bus, which runs from Dublin to Glendalough in the morning and returns in the evening. It was a good compromise — I could set my own schedule within the allotted time, but I didn’t have to drive on the opposite side of the road. Don’t forget to bring water, snacks and layers to weatherproof yourself against possible rain and wind.

The Wicklow Mountains make a great day trip to tack on to a guided group tour departing from or ending in Dublin. Check out the Ireland tours available through the Marriott Vacation Club® Explorer Collection.