The most hands-on way to experience Kaua’i, Hawai‘i’s oldest island, is to explore the lush lowlands and scenic ridges. One of the best Kaua’i hikes is the four-mile trek inland to a dazzling 300-foot vertical column of pure Hawaiian liquid known as Hanakāpī’ai Falls.

Offering sensory rewards at every turn, this hiking trail is located near the charming, end-of-the-rainbow town of Hanalei and beautiful Hā’ena State Park. 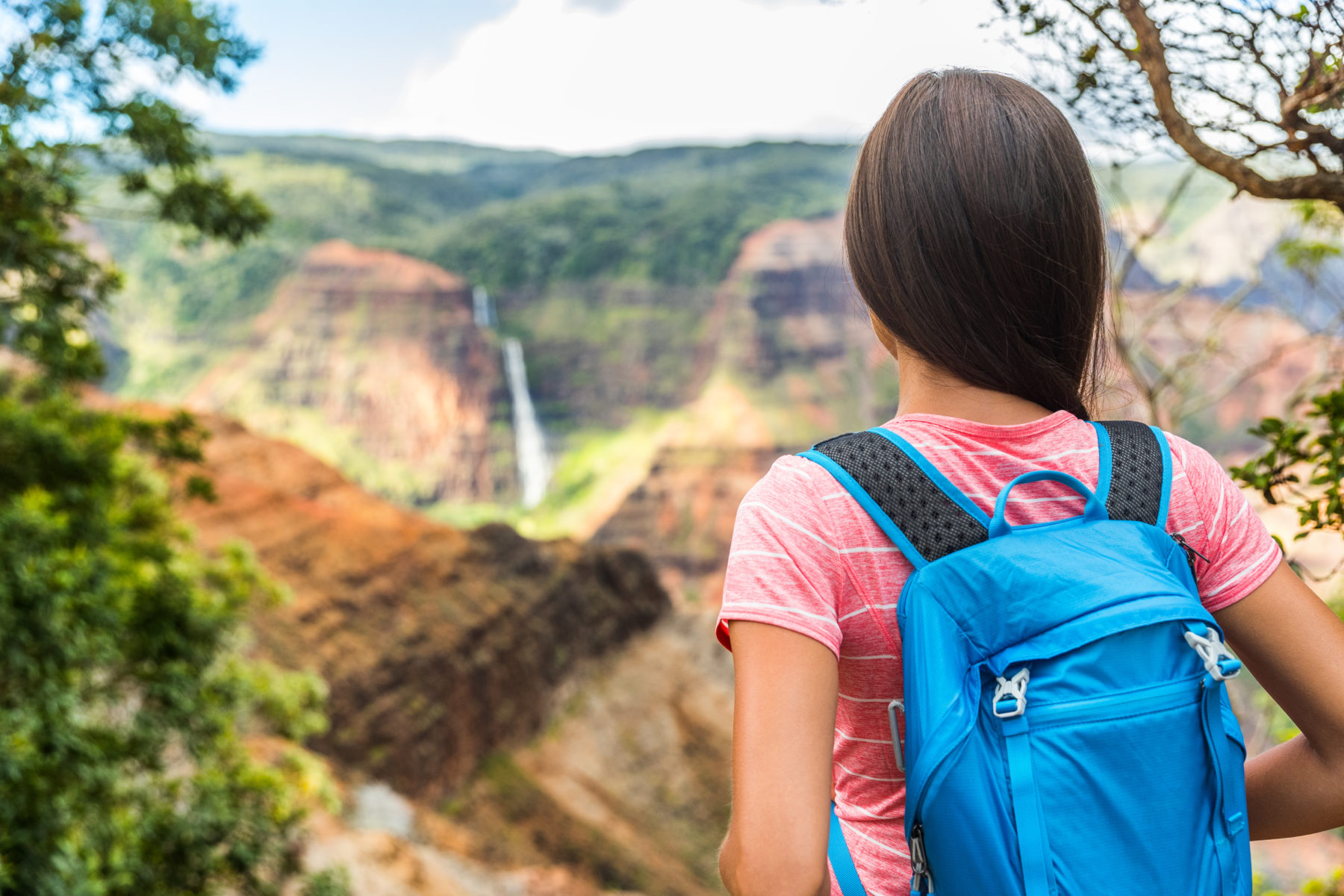 The first half of this Kaua’i hike travels along the beginning of the Kalalau Trail. For 20 minutes or so, expect a steady, well-worn ascent to an ocean vista, an incredible visual reward after the vigorous climb. Once the path plateaus, look forward along the Na Pali Coast’s famed sea cliffs, and glance back toward Ke’e Beach.

Both directions make for splendid mental snapshots — and beautiful photos — of red-dirt paths flanked by native hala and naupaka bushes, coconut palms, rubber trees and iron wood stretching beneath sky-jutting peaks down to the vast blue of the sea. A conspicuous line of frothy white shore-break dramatically accents the crease where land meets sea.

Enjoy a fairly level path along these picturesque cliffs for nearly one-and-a-half miles, until you begin to descend steeply to a river. This is where the boulder-strewn waters of Hanakāpī’ai Stream flow down to Hanakāpī’ai Beach. At this point, you can take a dip in the cooling stream or climb down to the beach where a picturesque lagoon often pools just inland of the shoreline. However, the area’s notoriously rough waves make the beach itself better for admiring the thundering surf from a distance than venturing in for a swim. 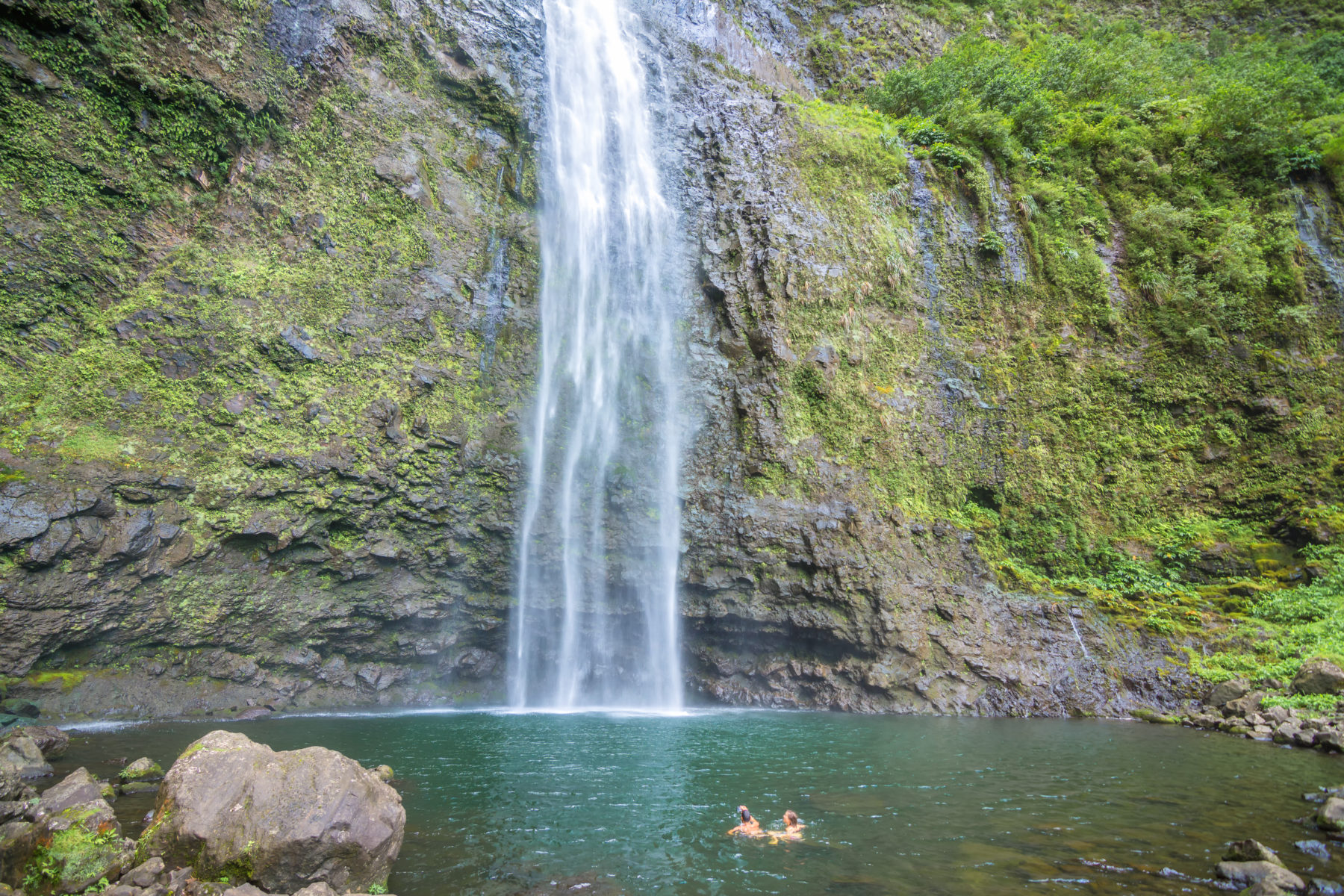 Once replenished, keep the stream on your left and head mauka, as locals say, or toward the mountains. This second half of the hike is less traveled than the Kalalau Trail portion. Rigorous footing uphill through a thicket of hala or pandanus trees marks the initial leg of the journey.

The stream runs parallel for much of the trek, through a grove of bamboo, uluhe ferns, strawberry guava saplings and attractive ornamental ginger flowers. In this deep valley on one of the wettest places on earth, you can expect moist earth and occasional blessings from the sky as locals reference the light sprinkle or even healthy downpours that frequent the area.

Deep crystal bathing pools beckon along the way. Answer the call or continue further toward the ultimate bathing pool. Eventually stream and path merge so that the walk turns into a navigation between water-steeped boulders. Before you even hear the rushing cascade, you’ll see the dramatic cleft of white that has cut into the ridge over the centuries, forming the wonder that is Hanakāpī’ai Falls.

On closer approach, the 300-foot pillar splashes down a mossy face into a wide emerald basin with high mountains framing either side. Sit on the surrounding rocks and feel the spray as you crane your neck toward the sky. Brave an icy plunge and swim across to stand under the invigorating shower, or climb the rocks behind the fall. Either way, the sight — or a dip — is all the recharge needed for the return trip and a day’s expedition that stands out as a Kaua’i bucket-list moment you’ll not soon forget.