The true pleasure of St. Maarten’s food scene is that it can be enjoyed right on the island’s beautiful sandy seashores.

We were trying to describe the mouthwatering appetizer we were devouring, but coming up short. Mostly because our collective vocabulary was deteriorating with every bite.

There were four of us — our good friends, Shawn and Valeria; my wife, Michelle, and I — on St. Maarten, the little island that’s split between Dutch and French sides, but unified in that it’s arguably the culinary capital of the Caribbean.

Except that wasn’t why we were here. We knew about St. Maarten’s foodie reputation, but we came for the beaches. Digging our toes in the sand at Orient Bay, Maho Beach, Grand Case, Dawn Beach, Baie Rouge, and as many of the other more than 35 Caribbean strands as possible was our main priority. Don’t get me wrong — I appreciate a top-notch dish as much as anyone. It’s just that after a day of sitting beneath a big umbrella sipping cocktails adorned with small umbrellas, I prefer enjoying a simple dinner to putting on resort-formal attire for a fancy spread.

To our delight, we quickly discovered that we could have our cake and eat it, too. More specifically, we could enjoy a range of impeccable cuisine without ever setting foot inside the restaurants from which it was served. So, we spent the entire week eating alfresco, partaking in what are now some of my all-time favorite meals, never even changing out of our swimsuits. 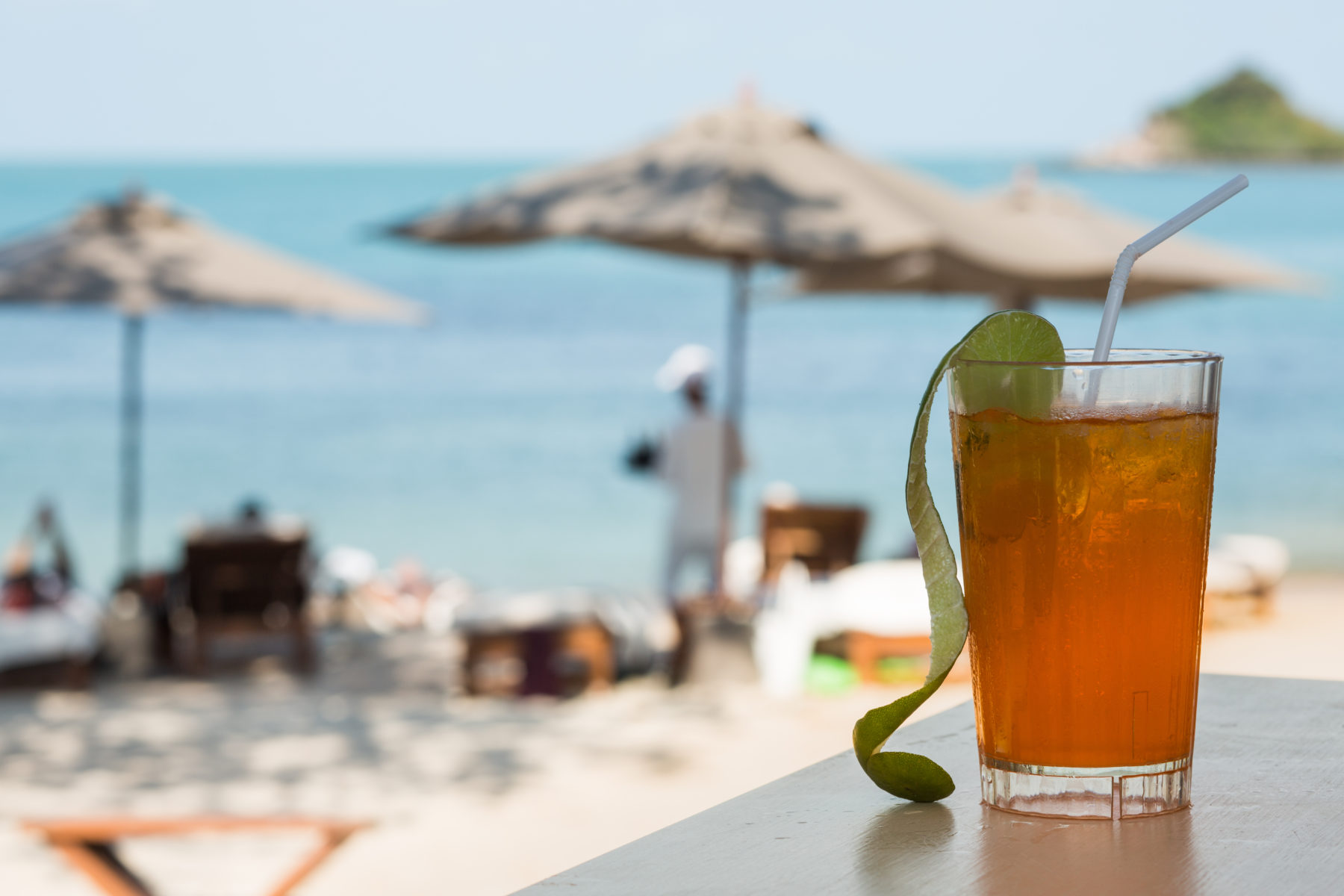 It all started at Orient Bay during our first full day on the island. We arrived late morning and by virtue of where we parked, happened to walk right past a place called Bikini Beach. It’s a proper restaurant, but also offers lounge chairs and umbrellas for rent on the sand as an extension of their patio. This looks as good as anywhere, we decided. Before long, Paul, the friendly proprietor, delivered a round of Miami Vices (a half-and-half combination of frozen strawberry daiquiri and piña colada), and, drinks in hand, we sat back to enjoy the scene.

There were a few men rigging up kitesurfing gear to our right. Jet Skis buzzed across the bay. A retired couple in matching bathing suits sauntered up and down the beach. And a group of kids bounced on a massive inflatable trampoline floating just offshore.

We mostly watched, making occasional pilgrimages across the white sand and into the turquoise water to cool off. After a couple of hours, it was time to get something to eat. Paul brought menus and propped up a 3-foot-tall chalkboard — the daily specials board — in front of our chairs. And that’s when I knew beach dining on this island wasn’t like beach dining elsewhere.

One of the specials was a salade nicoise sandwich. I’m more of a cheeseburger guy, but something about the hand-scribed specials board — wedged into the sand, with all manner of people taking part in water activities in the background — had hypnotized me. “I’ll take the sandwich special,” I said.

Most meals I’ve eaten on various beaches around the world are delivered on paper plates or wrapped in heavy-duty napkins. Not at Bikini Beach. When Paul returned with our food, it was plated on porcelain dishes with real silverware and cloth napkins. The top of my crusty baguette was set strategically askew to reveal the vibrant sandwich contents: green lettuce, purple onions, black olives, red tomatoes, and large chunks of pink tuna.

It was divine. And the fact that I was eating it right on the beach made it that much better. It’s hard to explain the joyful juxtaposition of noshing white linen–caliber fare — in both presentation and flavor — while your bare feet are caked with sand and your also-bare shoulders glisten with freshly applied sunscreen, but it’s something I’m now convinced every beach lover should experience. 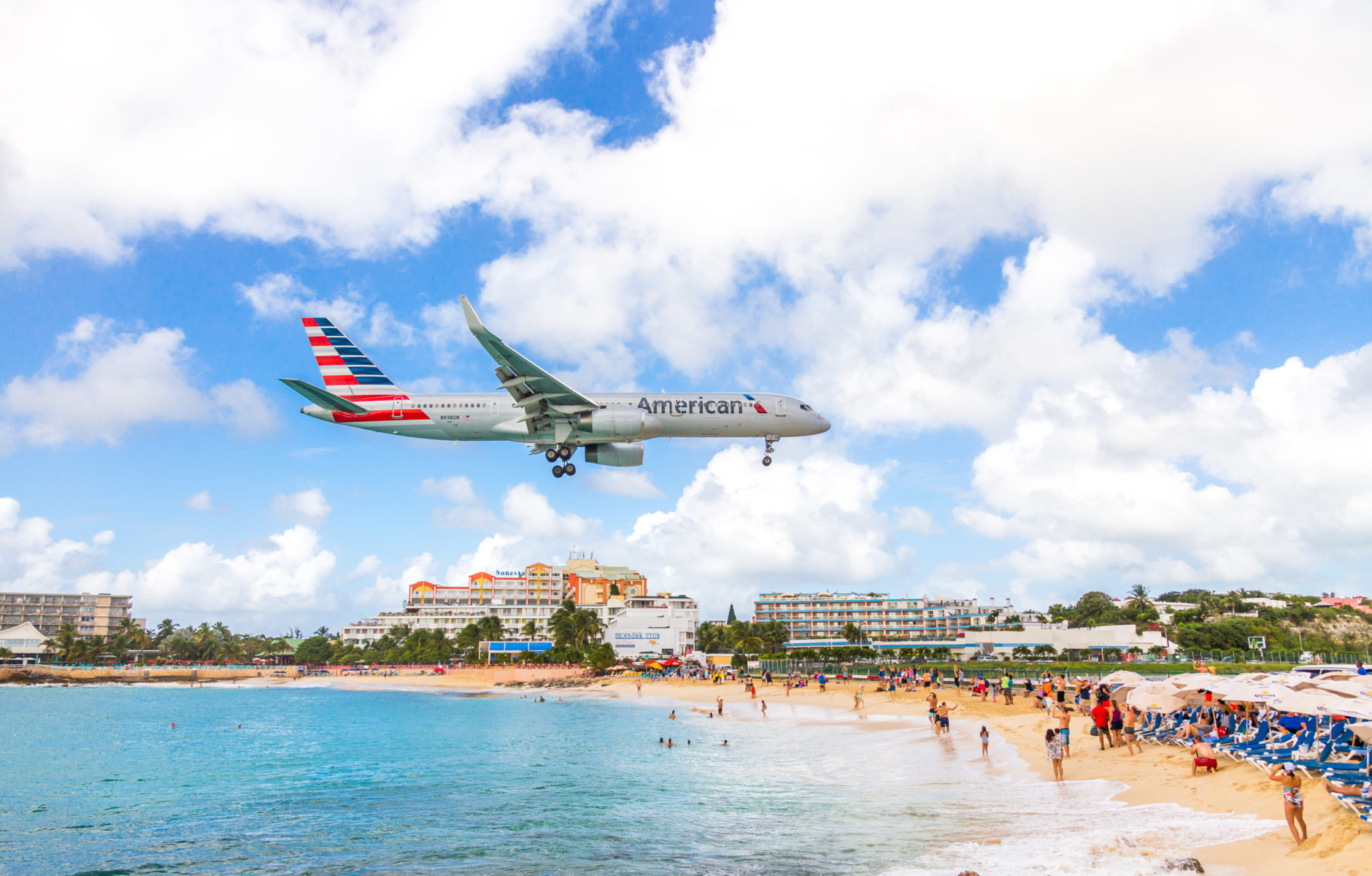 A few days later, we headed to Maho Beach, the most popular stretch of shoreline on the Dutch side of the island. This is where airplanes fly right overhead, and I can tell you from experience that all those pictures you see of people posing with massive jetliners coming in for a landing over their shoulders are not tricks of photography. There’s the beach, a narrow two-lane street, and then the runway at Princess Juliana International Airport.

And at the south end of the sand is Sunset Beach Bar. Similar to Bikini Beach, they rent lounge chairs and umbrellas. Their menu is more gastropub than French bistro, but the food is just as satisfying. Shawn and I both ordered cheeseburgers topped with bacon and egg; Valeria had the sesame-crusted goat cheese salad with candied walnuts, apples, and raspberry vinaigrette; and Michelle went for the vegetable panini.

After our simultaneous first bites, Shawn beat me to the five-star review. “This hamburger is delicious.” The ladies were equally impressed, and Valeria pretty much summed up the entire trip (even though we still had a few days to go) with “All the food here is delicious.”

By then, we’d had several meals on both sides of the island and had done nothing but rave about them. Seafood, pasta, barbecue, pizza. It was all scrumptious. St. Maarten is known for its food. but I had thought it was because of a few highly rated restaurants. Nope. Everything’s really good. “It’s probably thanks to all those gourmet restaurants that everyone’s gotta raise their game, even these casual beach bars,” Michelle reasoned. 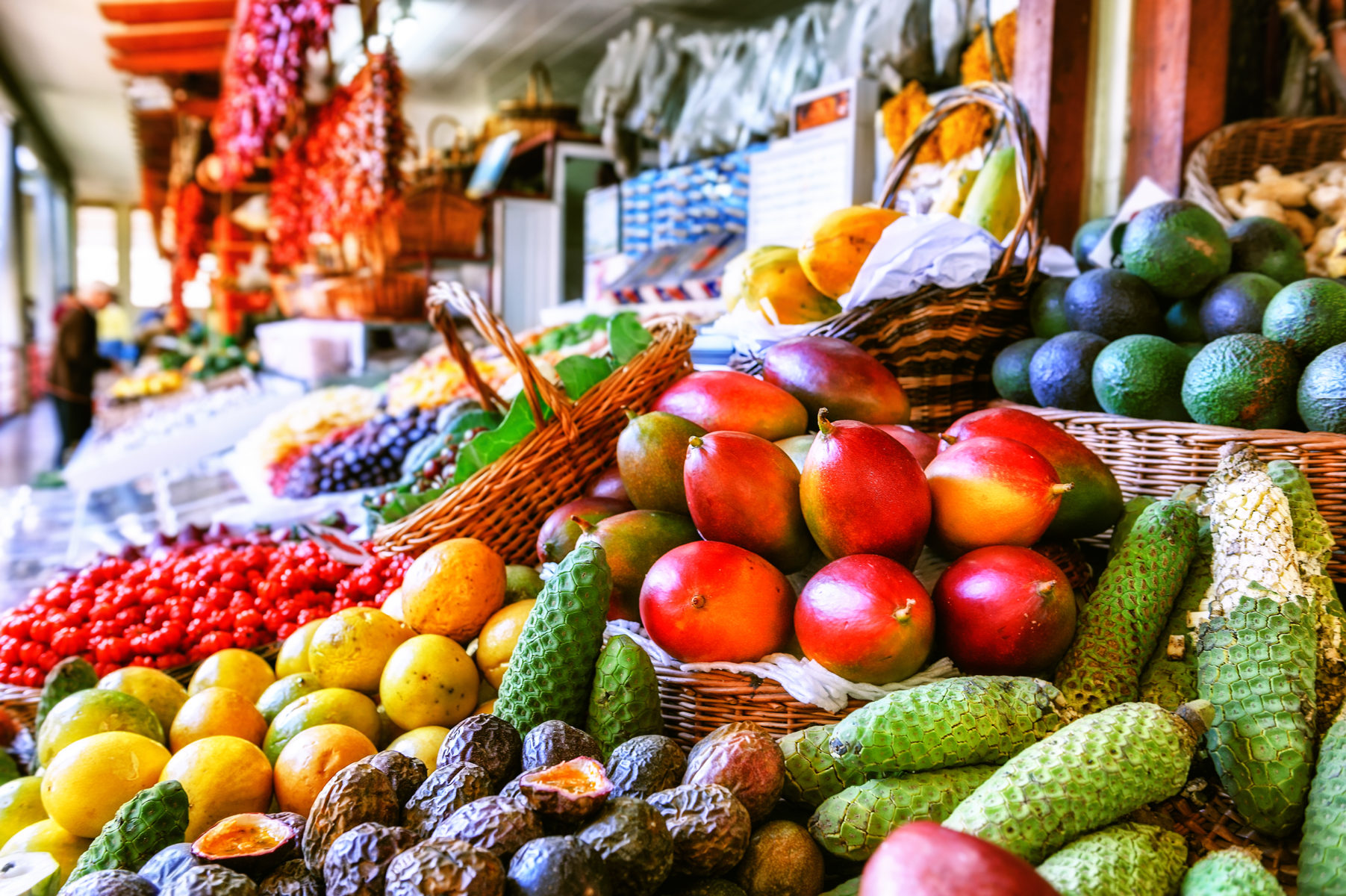 The next day, we decided to raise our own game and pack a small picnic for an afternoon on Dawn Beach. I’ve always thought part of the fun of staying at vacation ownership properties is having a kitchen, because it provides a wonderful excuse to stop at the local supermarkets and various roadside produce stands. And on an island where all the food is good, you can score a bevy of fantastic ingredients for whipping up some tasty do-it-yourself snacks.

We strolled the aisles of Le Grand Marché, St. Maarten’s grocery chain, which were packed with plenty of the usual suspects — citrus fruits, thick-cut steaks, potato chips, and so on — as well as some things you might not see at your home supermarket: lychees, monkfish, and freshly baked macarons.

We left with a range of Gouda and cheddar cheeses, saucisson, and prosciutto, and several loaves of French bread (and some of those macarons) for a nice charcuterie board. Before we got to the beach, though, we had to make one more stop.

“There’s a little produce stand up here on the right,” Michelle said from the back seat. “I want to see what they have.”

What they had was homemade hot sauce packaged in a recycled, pint-size bottle of vodka. There was no label, no ingredients — just a friendly warning from the woman who was selling it that it was the “hottest hot sauce you’ve ever tasted.” Turns out she was right. When Michelle made guacamole later, she added barely a teaspoon for a staggering amount of kick. 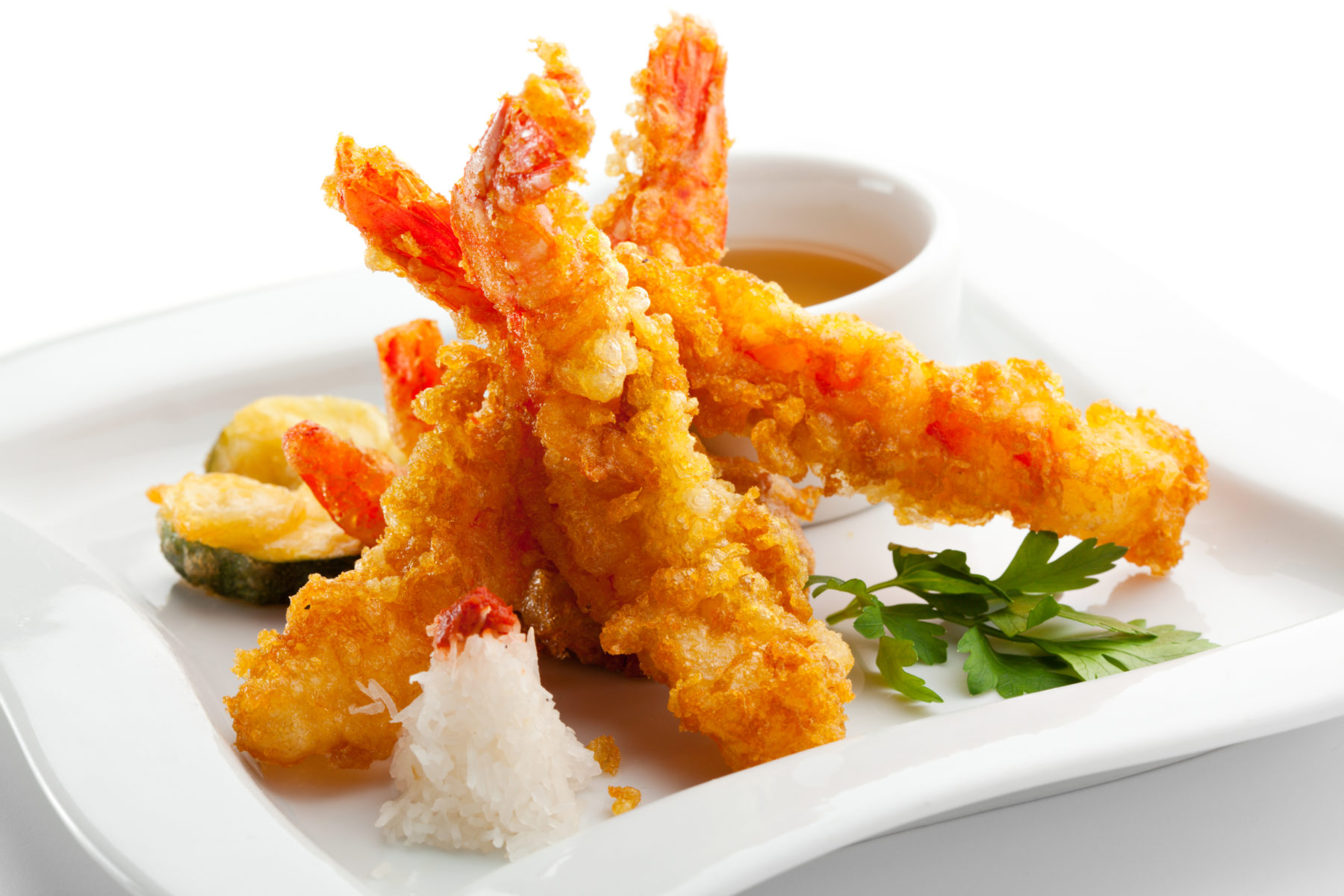 The charcuterie picnic on Dawn Beach was a success, but I can’t claim it matched our week’s final open-air meal. We were on the shore in Grand Case, a town on the northwest side of the island that’s renowned for its concentration of outstanding eateries. If there’s one place on this Caribbean gem responsible for its culinary reputation, this is it.

Our plan for the day was to relax on the beach and then, finally, after a week of keeping it casual, sit down to a first-class feast at either L’Auberge Gourmande, La Villa, or Spiga.

We never made it. Instead, with lunchtime approaching as we read our books and splashed in the ocean, we ordered a shrimp tempura appetizer from Captain Frenchy. Shawn took one bite and informed our server that we were going to need another plate. “Just keep ’em coming,” he said, not even half-joking.

In all, we consumed four orders of the shrimp tempura that afternoon. It was Valeria who finally came up with what we decided was the best description. Midway through our third plate, she paused and said, “They’re like shrimp doughnuts.”

The label stuck and we’ve been searching for our next round of “shrimp doughnuts” ever since. Happily, I think it’s going to require a return trip to St. Maarten. We’ve yet to find anything that compares to the on-the-beach alfresco dining that’s available seemingly everywhere on the island.

Travel to St. Maarten and beyond through our external exchange partner, Interval International®

This article originally appeared in Issue 2, 2019 of the North America edition of Interval World magazine, published by Interval International®, an indirect subsidiary of Marriott Vacations Worldwide. Any re-use of this content, or any portion of this content, is strictly prohibited. All rights reserved.