Bright. Lively. The locals call Queensland’s Gold Coast “God’s own country,” and for travelers, it’s a place to play, soak up the sun, and get an adrenaline fix.

As an introduction to Australian wildlife, it doesn’t get much more intimate than this. More than a dozen rainbow lorikeets — dazzlingly hued and as rambunctious as teenagers at a Justin Bieber concert — jockey for position on my arms, shoulders and head. I duck as wings flap perilously close to my face and can’t help but grin as the birds squabble over the seed I hold in a metal tray. 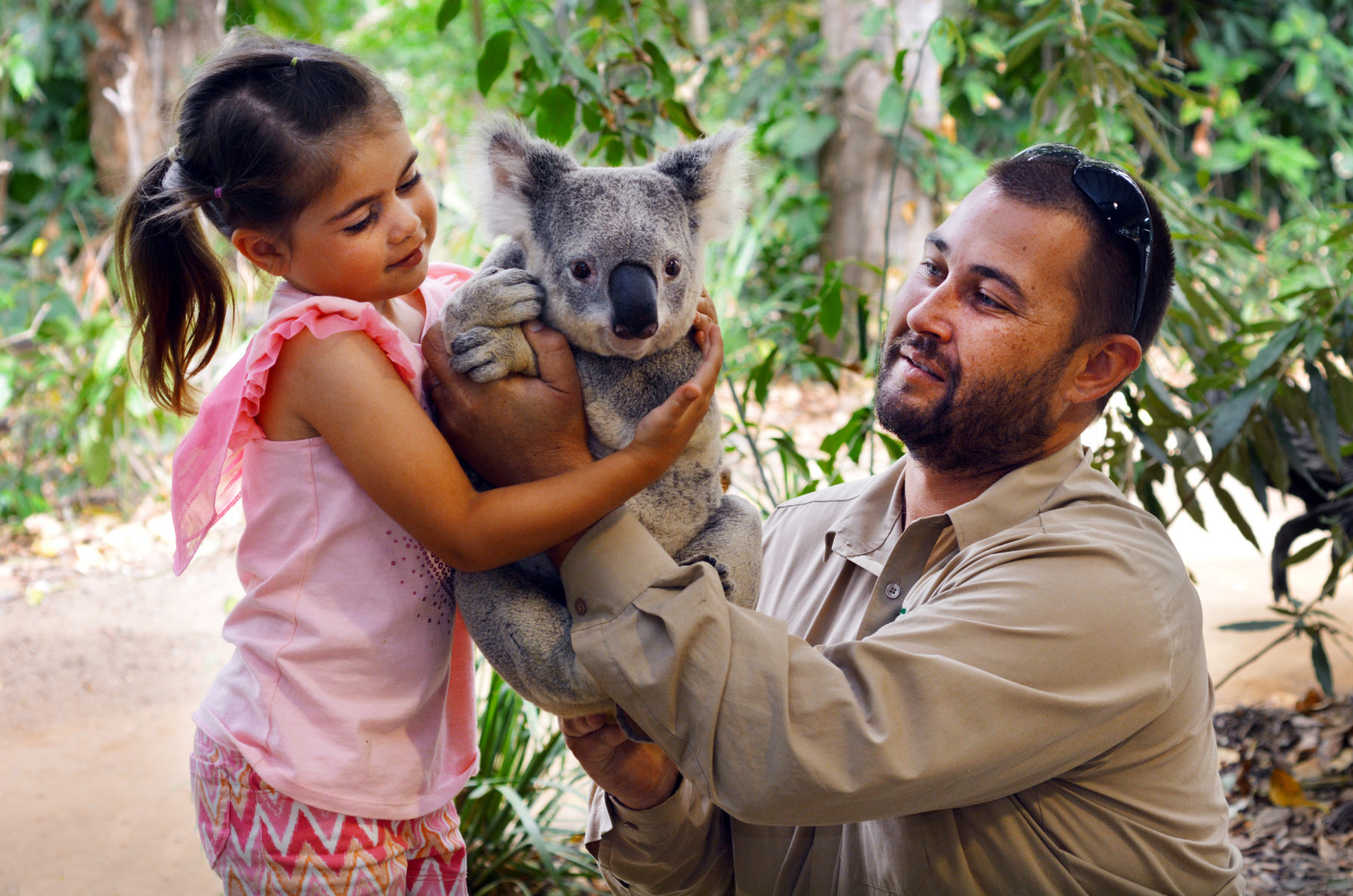 Currumbin Wildlife Sanctuary is one of the oldest attractions on the Gold Coast, allowing visitors to interact with feathered, furry and scaly residents, including a 15-foot long crocodile named Boss Hog. Feeding encounters take place twice a day, while displays about reptile and bird-of-prey handling reveal fascinating facts about some of the country’s not-so-cuddly creatures.

One of the most compelling areas of the sanctuary is its animal hospital, which cares for wildlife injured in car accidents, bushfires and dog attacks. It’s heartening to see the quality of critical care little creatures like baby kangaroos, echidnas (think cute miniature anteaters) and birds receive during their recuperation.

As part of my visit, I spent the afternoon in the eucalyptus canopy testing my mettle at Currumbin’s Adventure Park High Ropes course. Five separate paths wind through the  bush, graded from beginner to expert. offering 80 individual challenges. There are flying foxes (zip lines), high wires, Tarzan swings and wobbly suspension bridges to cross — the most mind-boggling being Croc Shock, a 490-foot zip line suspended above a saltwater crocodile enclosure. 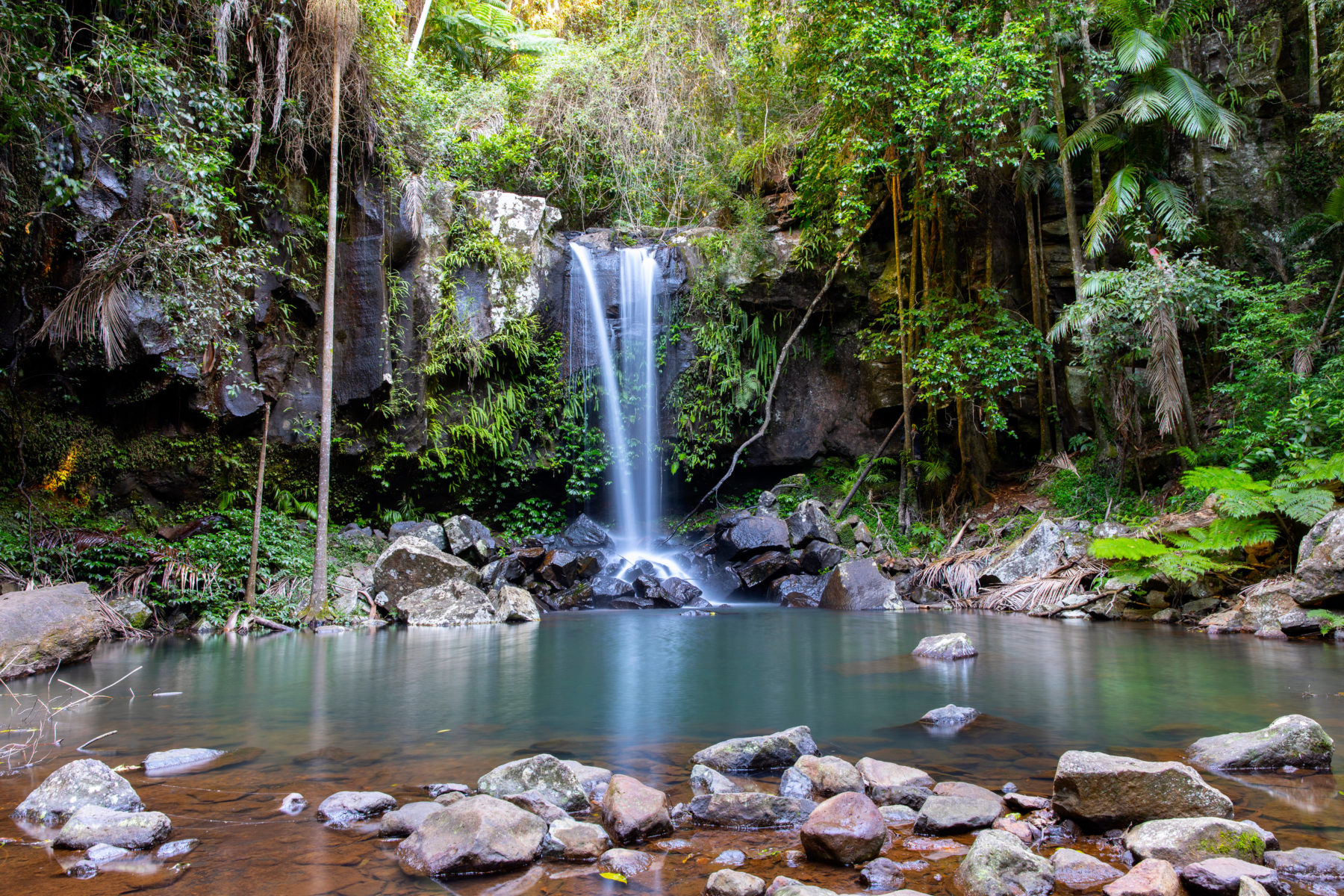 Day 2: Into the Mountains

Now keen to see wildlife in its natural environment, I head west to the hinterland (inland) areas, known as “the green behind the gold.” The vegetation brightens as I make my way up Tamborine Mountain, the rim of what was once a massive volcano. Here, the temperature is cooler and the pace a little slower, with an emphasis on the good life. Boutique wineries, art galleries, cafes and award-winning restaurants add a touch of culture, while pockets of rainforest collectively known as Tamborine National Park make up the third-oldest national park in the world.

Easing myself into exercise mode, I head to the Palm Grove Rainforest Circuit, a one-hour hike through deep, silent woodland. It’s an alien world, with dappled light and still air, disturbed only by the occasional call of a whipbird or the scratching of a scrub turkey. Strangler figs curl their tendrils skyward around host plants, while the fan-like, buttressed bases of yellow carabeen trees are a distinctive, awe-inspiring feature.

With an array of restaurants to quell my growing appetite, I opt for a mountain classic — the Polish Place. This distinguished establishment has been serving pierogies (filled-dough dumplings) and bigos (meat-and-cabbage stew) for more than 30 years. As well as a traditional menu and 32 varieties of vodka, the restaurant has walls decorated with Polish art and handicrafts. Even with the homely ambiance inside, it’s hard to resist the views from the terrace overlooking the valley below.

After a stroll through the Gallery Walk shopping district (more local art including glassworks, ceramics and jewelry), I’m drawn back to the rainforest. But this time, I’ll be seeing it from a higher vantage point. The Tamborine Rainforest Skywalk is an elevated walkway which takes you from the treetops down to lower elevations, past rock pools, a butterfly lookout and a local history enclosure. The highlight of the steel pathway is the Cantilever, a 130-foot span that hovers nearly 100 feet above a fern glade–encircled creek. 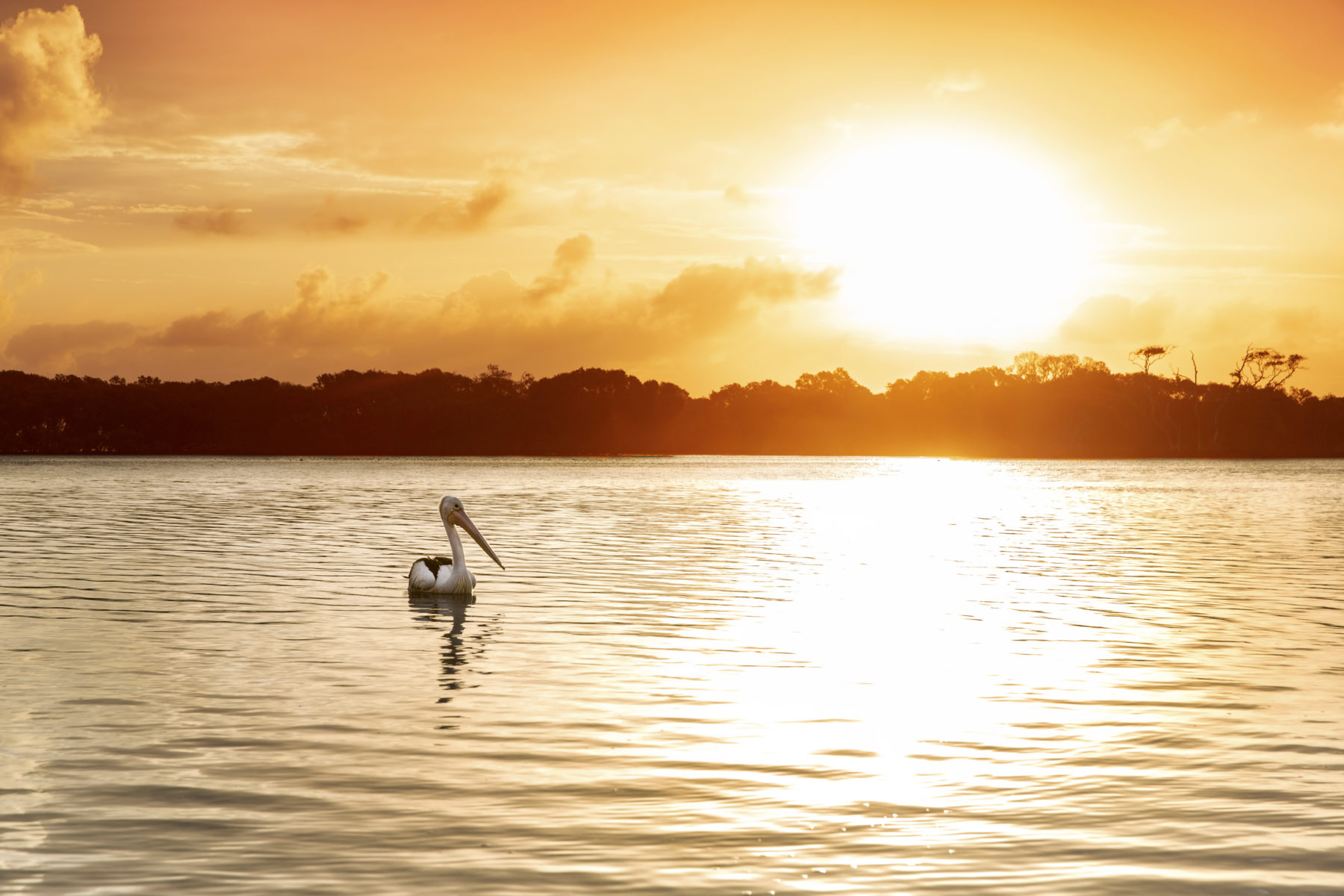 While the Gold Coast beaches are spectacular, they can often be crowded. Just a leisurely ferry or water taxi ride from Runaway Bay Marina (20 minutes north of Surfers Paradise) brings you to the almost-deserted South Stradbroke Island, with more than 13 miles of pristine surf beach, calm inner waterways ideal for kayaking and fishing and a bushy interior that is home to rare golden wallabies.

In contrast to its sibling sand island, North Stradbroke, there is little commercial development on “South Straddie.” The island is the domain of campers, surfers and day-trippers. Resembling the boat from the TV show “Gilligan’s Island,” the privately owned Rum Runner drops me off at Tipplers Café, on the western side of the island. Open only on weekends, this is the perfect place to indulge in a long, carefree brunch before satisfying your inner Robinson Crusoe.

About half a mile each way, the walk from the cafe to the east coast crosses scrubland and dunes before giving way to a magnificent surf beach. These waters are not patrolled, so caution must be exercised before swimming or surfing. But even just sitting on the sand and staring out at the horizon reaps rewards — between June and October, this is a thoroughfare for migrating humpback whales, which can often be seen breaching and playing offshore. 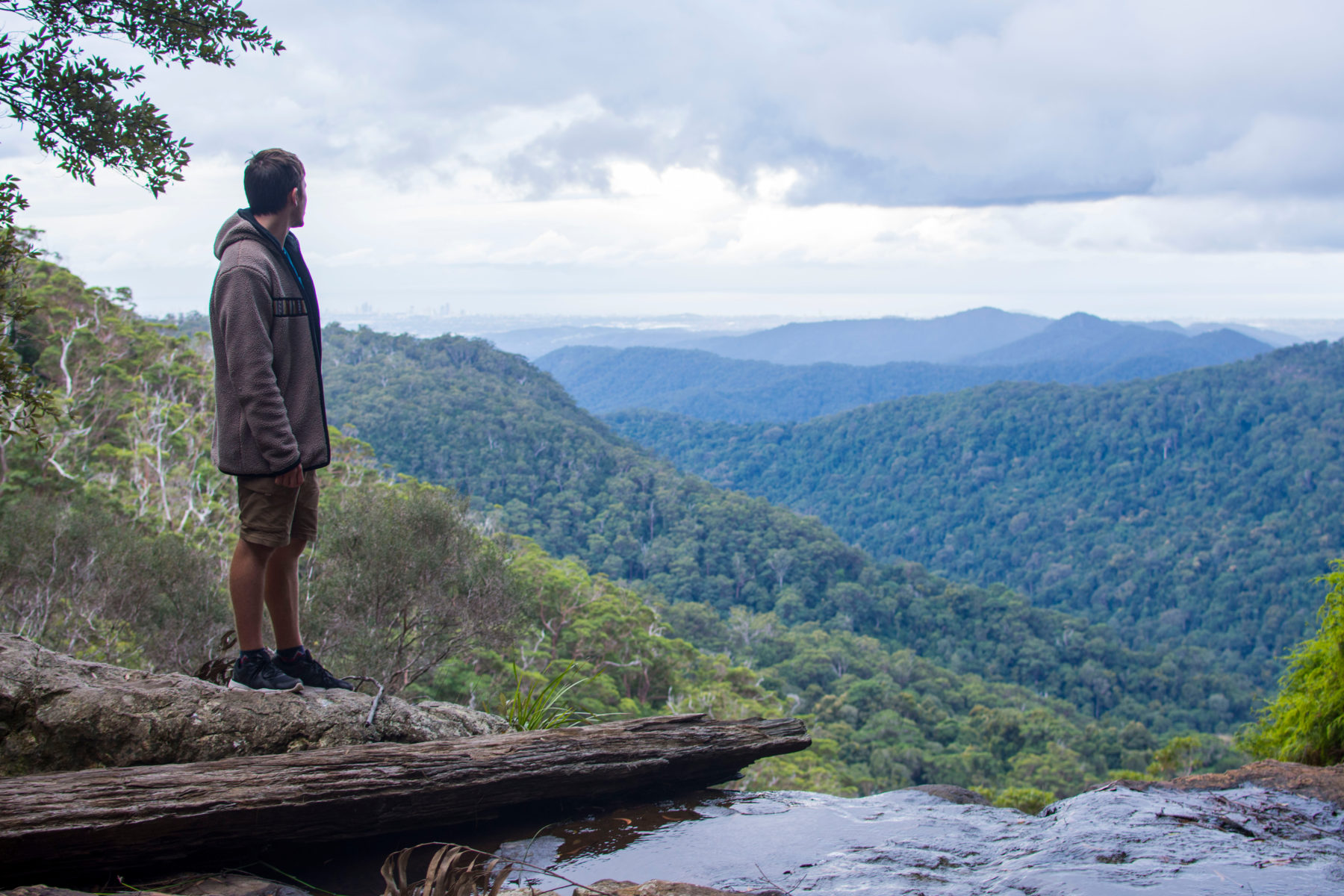 Heading south-west from the Gold Coast suburb of Nerang, the freeways and high-rises slip away as I enter the cool, tranquil forests of Springbrook National Park. This section of the World Heritage–listed Gondwana Rainforests contains the rarest plant species in southeast Queensland, including some that date back to the Jurassic age. On the crest of the ridge, with spectacular views back towards Surfers Paradise, is the Springbrook Plateau section. My first stop is Purlingbrook Falls lookout, which offers stunning views of this waterfall, spilling thunderously after a recent rain.

Next, it’s on to a difficult-to-resist viewpoint called The Best of All lookout. And it does indeed live up to its name, with expansive vistas to the ocean, Mount Warning and the coastal town of Byron Bay in the distance. But for me, it’s the details on the walk from the parking lot that really impress; the stands of ancient Antarctic beech trees, said to be more than a thousand years old; iridescent green moss bejeweled by dew; the refreshingly cool air, in such contrast to the sun-baked beaches.

More of Mother Nature’s enchanting artistry is at work in the forest at Natural Bridge. This is an incredible formation created over millions of years by water cascading through the roof of a basalt cave. Swimming in the cave and creek is prohibited, but the dynamic waterfall spray cool me almost magically.

At night, this cave is said to come alight with glow worms, the bioluminescent larvae of a fly, arachnocampa flava, that clings to its damp walls. Imagine the Milky Way, with a million tiny stars casting their light so pretty and surreal. 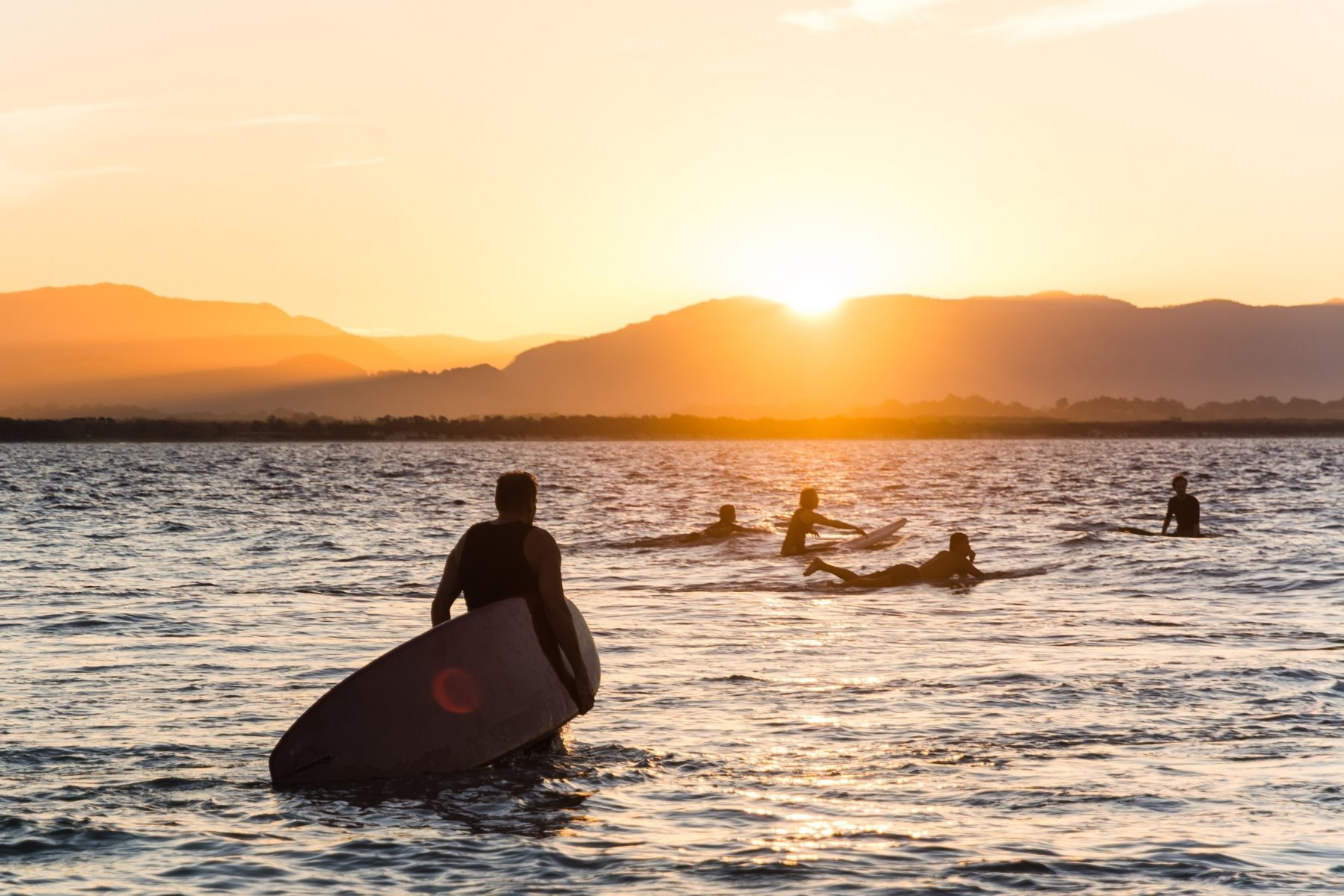 Ask any Australian what the coolest town in the country is, and chances are the answer will be Byron Bay. Branching out from its roots as a hippie and surfer hangout, it now boasts some of the most impressive real estate in Australia. But despite its popularity and sophistication, it still manages to retain that laid-back, carefree vibe.

Byron Bay is only an hour’s drive south of Gold Coast, and there are also buses from Surfers Paradise or the Gold Coast Airport. The town itself is eminently walkable, or the local buses can transport you to the most popular sights.

Immediately in front of town is Main Beach, a great people-watching spot. Walk along the powder-soft sand towards Cape Byron, the easternmost point in Australia, where a lighthouse stands sentinel over the Pacific Ocean hundreds of feet below. From the lookout, gaze out to spot breaching whales, and join the throng of fitness fans walking and jogging on trails.

The region is famed for its markets, awash in tie-dye and Bohemian types with dreadlocks and tattoos. Byron Bay Community Market is held on the first Sunday of each month, and there is also a farmers market every Thursday, offering a mouth-watering selection of fruits, vegetables, cheeses and organically farmed meats.

No visit to Byron Bay would be complete without indulging in a spa treatment or an alternative-health therapy. At the very least, take a yoga mat down to the beach, preferably at sunrise, and simply breathe in the serenity. Relaxation guaranteed.

Where to Stay:
Marriott Vacation Club® at Surfers Paradise, Australia

This article originally appeared in Issue 2, 2014 of the North America edition of Interval World magazine, published by Interval International®, Inc., an indirect subsidiary of Marriott Vacations Worldwide Corporation. Any re-use of this content, or any portion of this content, is strictly prohibited. All rights reserved.