When you picture Phoenix, Arizona, cacti and tumbleweed may come to mind. But visit this southwestern city and you’ll also find impressive architecture by world-renowned masters like Frank Lloyd Wright.

I’m what you might call an art snob. Every time I travel to a new city, I make it a point to visit as many museums as I possibly can. But for a long time, I never gave architecture a second thought.

Sure, I could spot a pretty building (and most definitely recognize an ugly one). But I didn’t feel that interested in it until I visited Phoenix, Arizona, and was absolutely blown away by the stunning buildings that spring from the desert landscape. 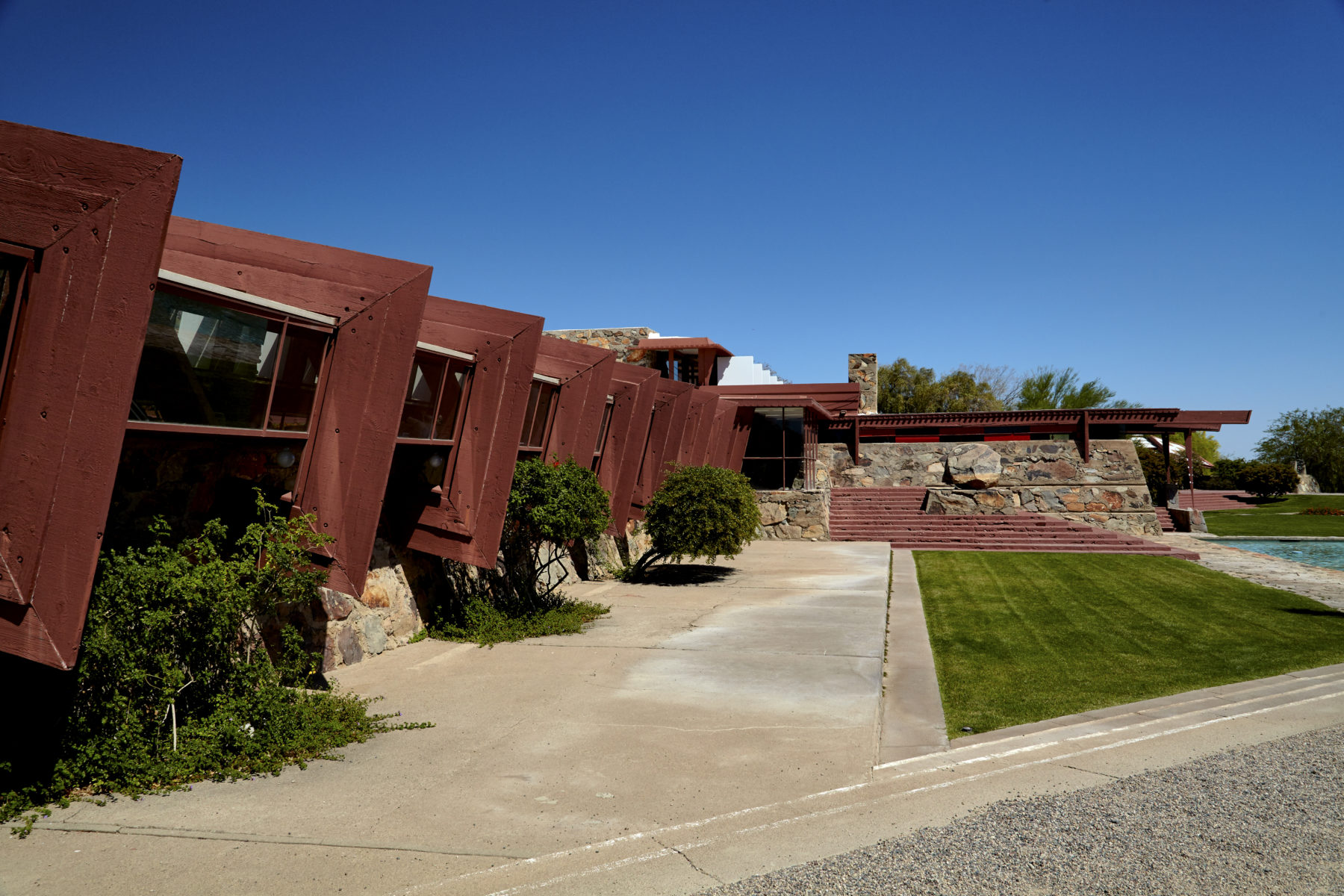 I began my tour at Taliesin West, Frank Lloyd Wright’s winter home — and the most famous building in the entire city. Located in the foothills of the McDowell Mountains, about 35 minutes from downtown Phoenix, Taliesin West also served as Wright’s part-time studio. For me, it was an introduction to local Phoenix design. Wright and his apprentices built the home as a sort of mind-meld with the western landscape: the home showcases natural materials, such as stones and sand, and features top-notch views of the Sonoran Desert and surrounding mountains. Wright used the space as an architectural school, too, which still operates today, grooming the city’s next generation of visionaries.

On a Wright kick, I headed back toward town to see another of his designs: a blue, 125-foot-tall structure known as the Frank Lloyd Wright Spire. Originally designed in 1957, the Spire was meant for the Arizona Capitol Building, but the state government found the concept too edgy. I love the way the tower rises above its flat desert surroundings with a cool neon glow. (It’s also located next door to the Scottsdale Promenade, a humongous mall, making it easy to get a shopping fix if the spirit moves you.)

The easiest and fastest way to get around Phoenix is by car; rideshares like Lyft and Uber are readily available. The Valley Metro Light Rail is an option, but make sure to check out its maps and schedules to see if a stop is convenient to your destination. 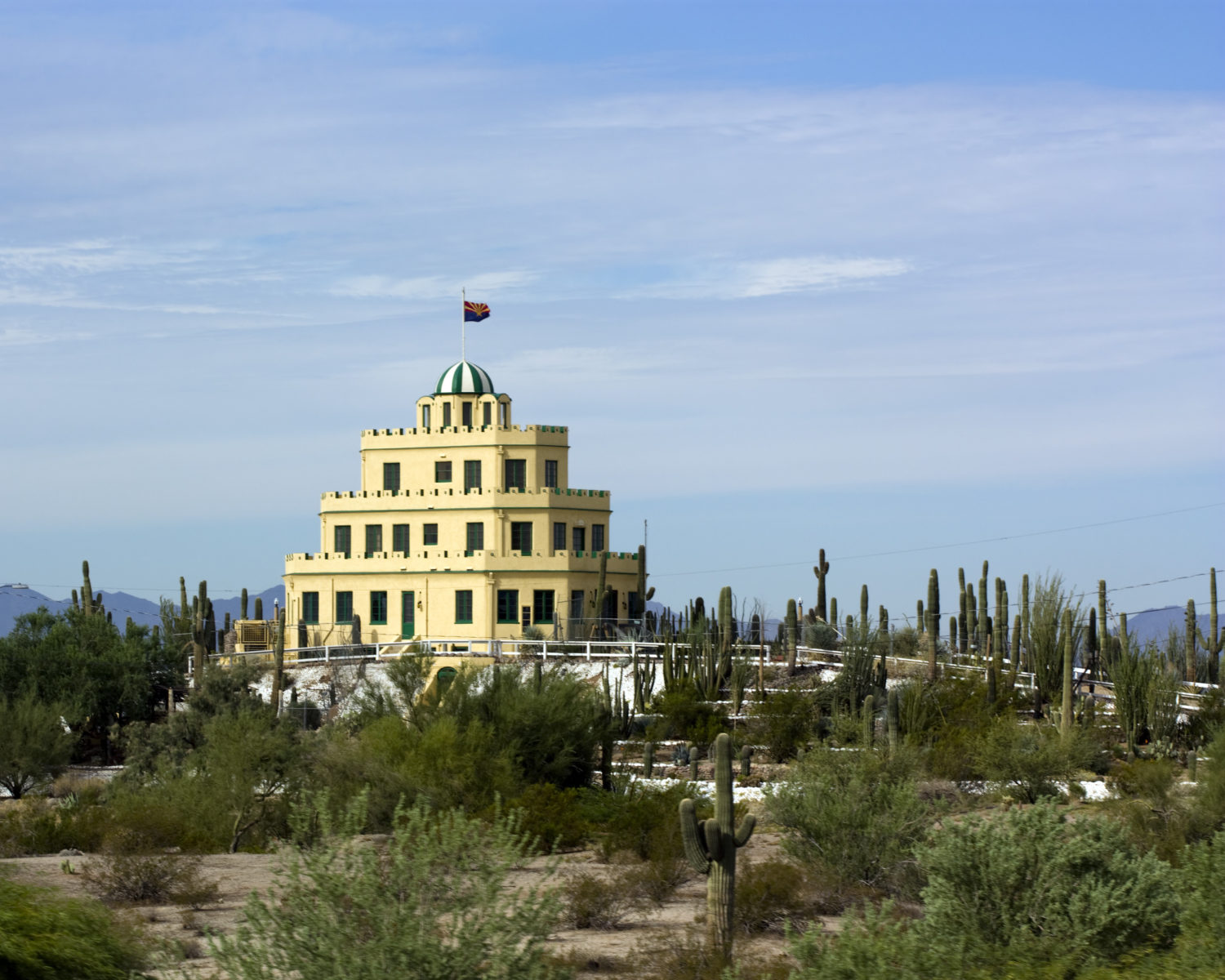 The only thing I love more than touring art museums while on vacation is visiting castles. In Europe, it’s easy. But imagine my surprise when I happened upon Tovrea Castle in Phoenix. Tovrea, a three-tiered structure made of pinewood and stucco, looks like a wedding cake. It was built in the 1930s by Italian immigrant Alessio Carraro, who was influenced by the castles of his homeland. The castle is open for guided tours on Fridays, Saturdays and Sundays; don’t miss the incredible cactus garden that features more than 500 cacti.

My next discovery was the Phoenix Financial Center, which is housed in a gorgeous structure designed by Wenceslao Sarmiento. Built in the mid-’60s, it showcases International Style architecture peppered with details of Googie architecture (a kind of modern style that is a part of the futuristic movement). Its nickname is the Punchcard Building, which, after one look, makes complete sense. The ultra-cool façade wowed me.

Phoenix is home to one of the best pizza places in the world. Don’t miss Chris Bianco’s Pizzeria Bianco , which is famous for its thin crust pizzas made in wood-burning ovens.

On my most recent visit to the Phoenix Art Museum, I merged my love of art and my new-found love of architecture. It was the first time I’d paid attention to the building itself, which is a work of art in its own right. The museum was built in 1959 by modernist architect Alden Dow (son of the founder of Dow Chemical, Herbert Henry Dow). Since then, it’s tripled in size thanks to expansions by Tod Williams Billie Tsien Architects. With sweeping overhangs and serene reflecting pools, the building is as beautiful as the art inside it.

Phoenix is the proper name of the metropolitan area, but Scottsdale and Tempe nearby offer excellent shopping and dining options.