When I arrived in Andalucia, Spain for a yearlong work stint, I had never heard of los pueblos blancos. These tiny “white villages” — some with impossibly long names — were simply dots on a map to me.

I soon discovered, however, that these whitewashed towns embodied the parts of Spanish culture I most hoped to experience. A far cry from the cosmopolitan cities of Madrid or Barcelona — and distinct from the resort and golfing destinations of the coast — los pueblos blancos keep Spain firmly positioned as the land of flamenco, olive groves, bullfighting, ancient ruins and Moorish architecture.

Whether you explore these towns over time, as I did, or during day trips from the coast, here are four unique villages that I recommend visiting. 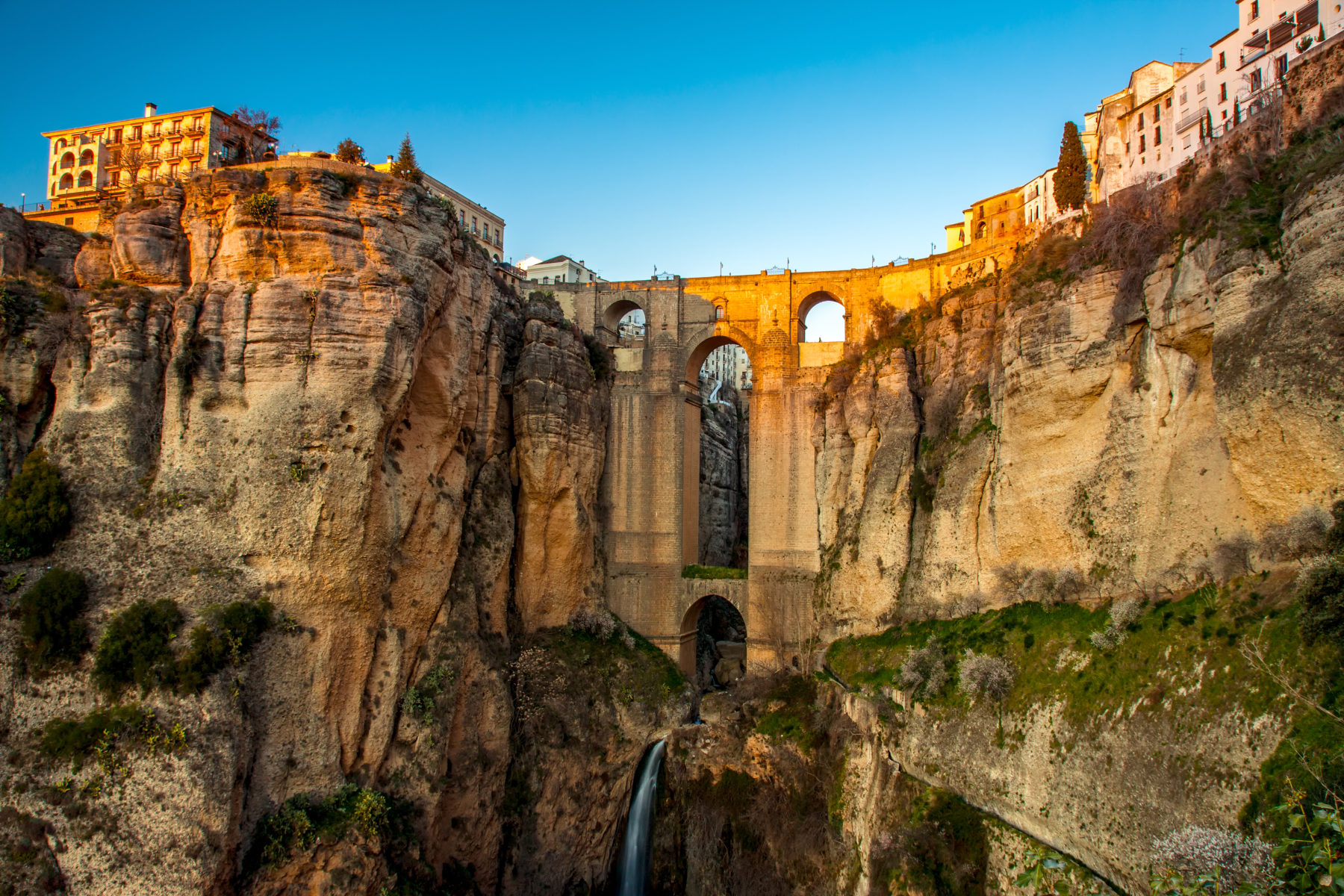 Picturesque Ronda in the Malaga province is the crown jewel of the white villages. Famous as the birthplace of Spanish bullfighting, the sizeable town features a preserved historic district. I loved wandering the narrow, cobbled streets, meandering into hidden plazas and soaking in the sun on a quaint patio with a strong café con leche. Eating options abound in Ronda, ranging from typical tapas bars to fine dining featuring the best of Andaluz cuisine.

Ronda is as dramatic as it is charming — the town is built on the edge of a sheer and sudden cliff. (Many of these villages originally served as military fortresses, so the rugged, hilltop locations once provided protection). The quaint town center boasts a preserved bullring and museum, the Plaza de Toros. In my experience, even lifelong residents often expressed mixed feelings about the bloody sport, but the historic ring is still worth a look, whether you simply stroll the grounds as I did, or attend a fight during the annual bullfighting festival.

One of the most popular attractions in Ronda is the Puente Neuvo, a bridge that spans a 100-meter gorge called El Tajo. For the best vantage point, hike down into the fields below the town and look up at the chasm and the bridge. 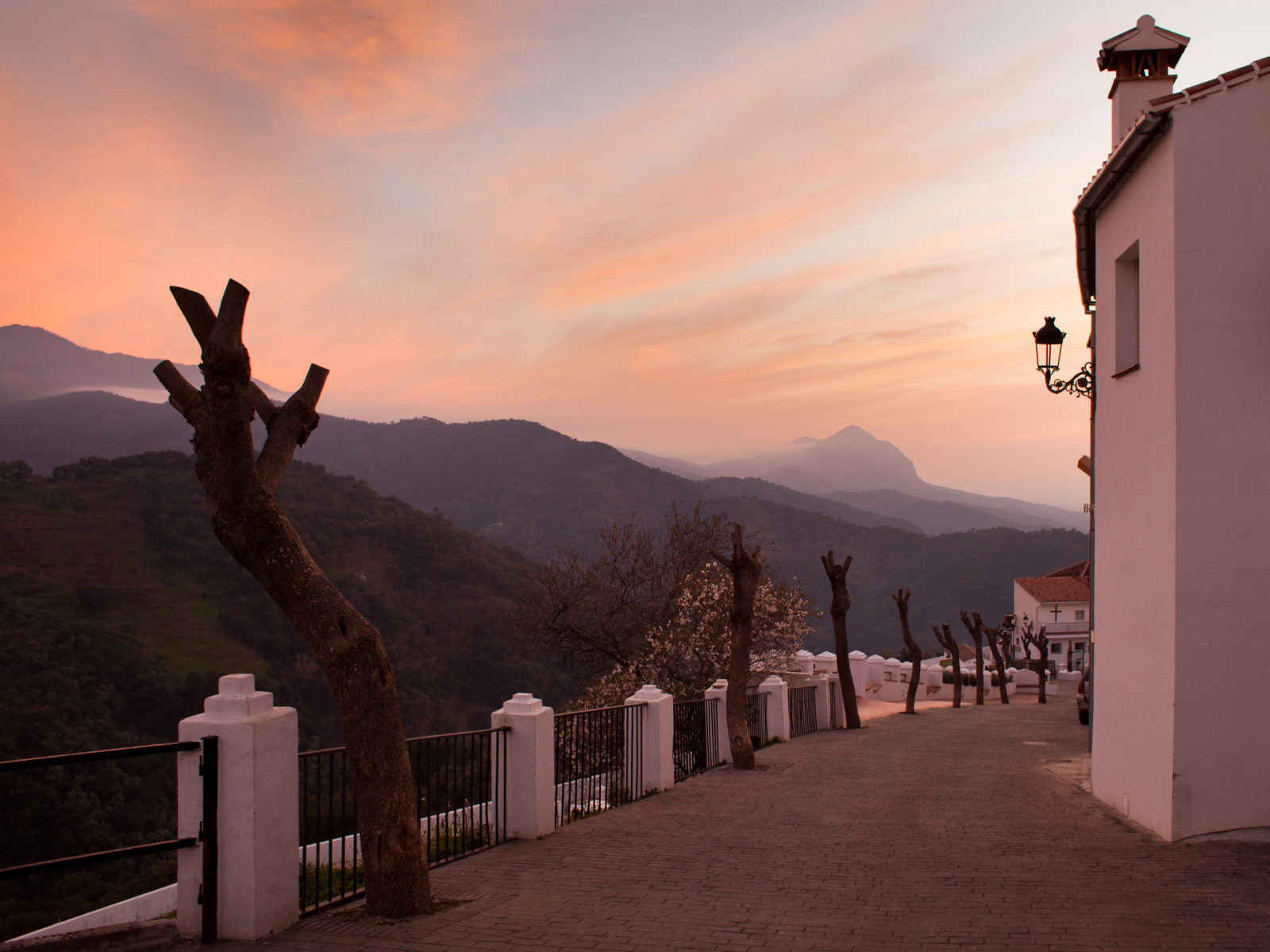 The first time I saw Grazalema, located on the easternmost end of the Cadiz province, I thought I’d ridden my bike into a magical village in the clouds. Situated on an 800-meter pass, Grazalema sits amid the Sierra de Grazalema Natural Park, surrounded by dramatic rock outcroppings rising out of the mountainside. I spent a few hours hiking in the area, yet felt like I barely scratched the surface of what the park had to offer.

I also found many charming places to eat and enjoy a coffee in this quaint, visitor-friendly town. Locals eagerly directed me to try payoyo, a type of delicious local goat’s milk cheese. Afterward, I gave a wave of thanks to one of the numerous goatherds I saw while pedaling out of town. 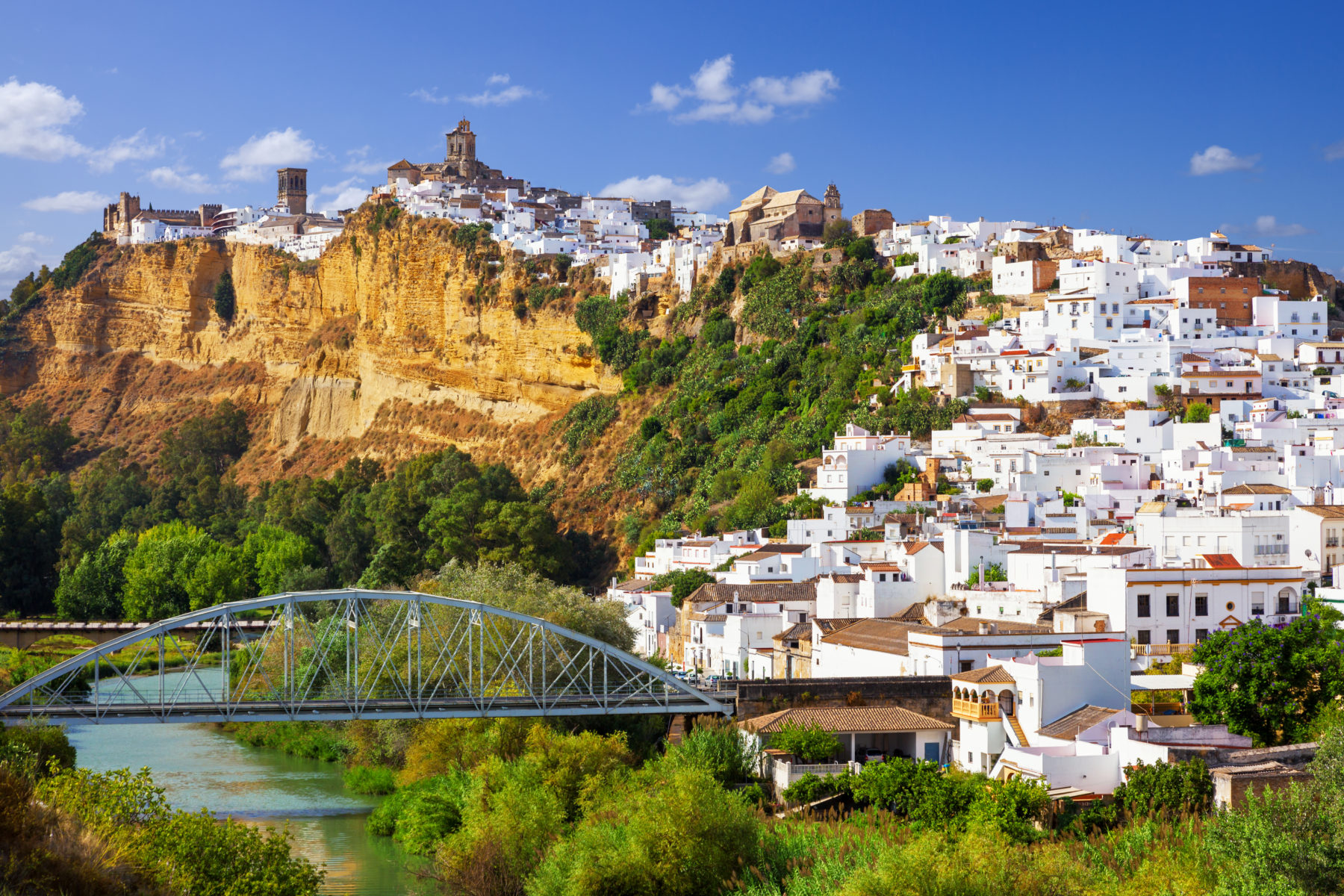 Arcos looks like it’s teetering on a precipice, making it among the more striking pueblos blancos in the Andalucia region. I love a good castle, so I made a point to visit the battered-but-stately Castillo de Arcos. I also enjoyed exploring Arcos’s twisting, narrow cobblestone streets and dipping my feet in the nearby lake. The spectacular views at the edge of town — basically a sheer cliff, as in Ronda — look out over rolling plains. 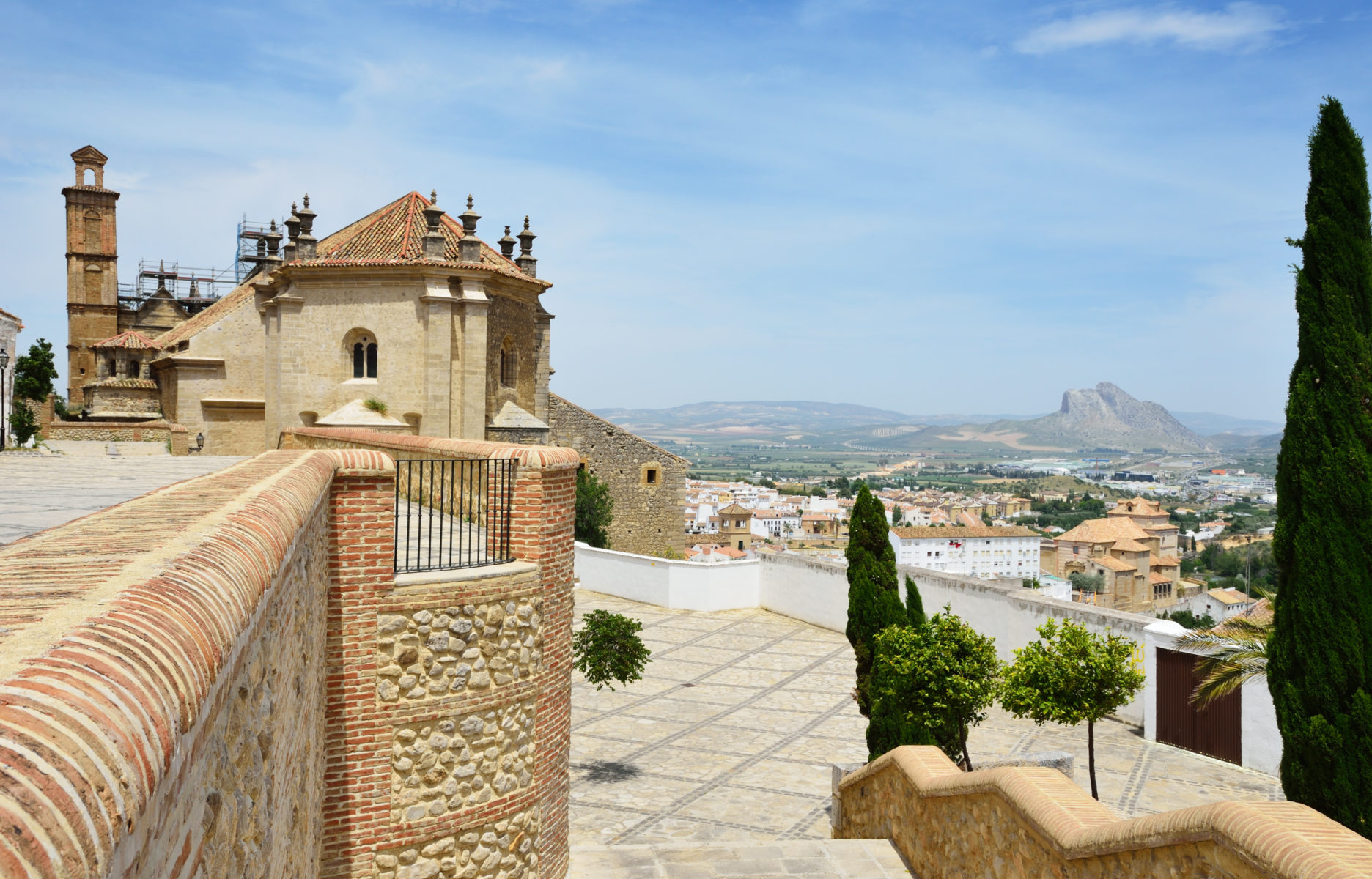 For ruin-seekers and history buffs, Antequera has it all. The city is scattered with cathedrals boasting tall, thin spires, but it was the archeological attractions that captivated me. Be sure to visit the two dolmens just outside of town. These ancient stone burial chambers date back about 5,000 years, making it one of the more remarkable sites in Antequera.

I also enjoyed visiting the Moorish-style castle and the ancient Roman baths, a startling reminder that this area was once part of the Roman Empire. Several natural park areas surround Antequera, including the Fuente de Piedra Natural Reserve, where flocks of comical flamingos congregate. 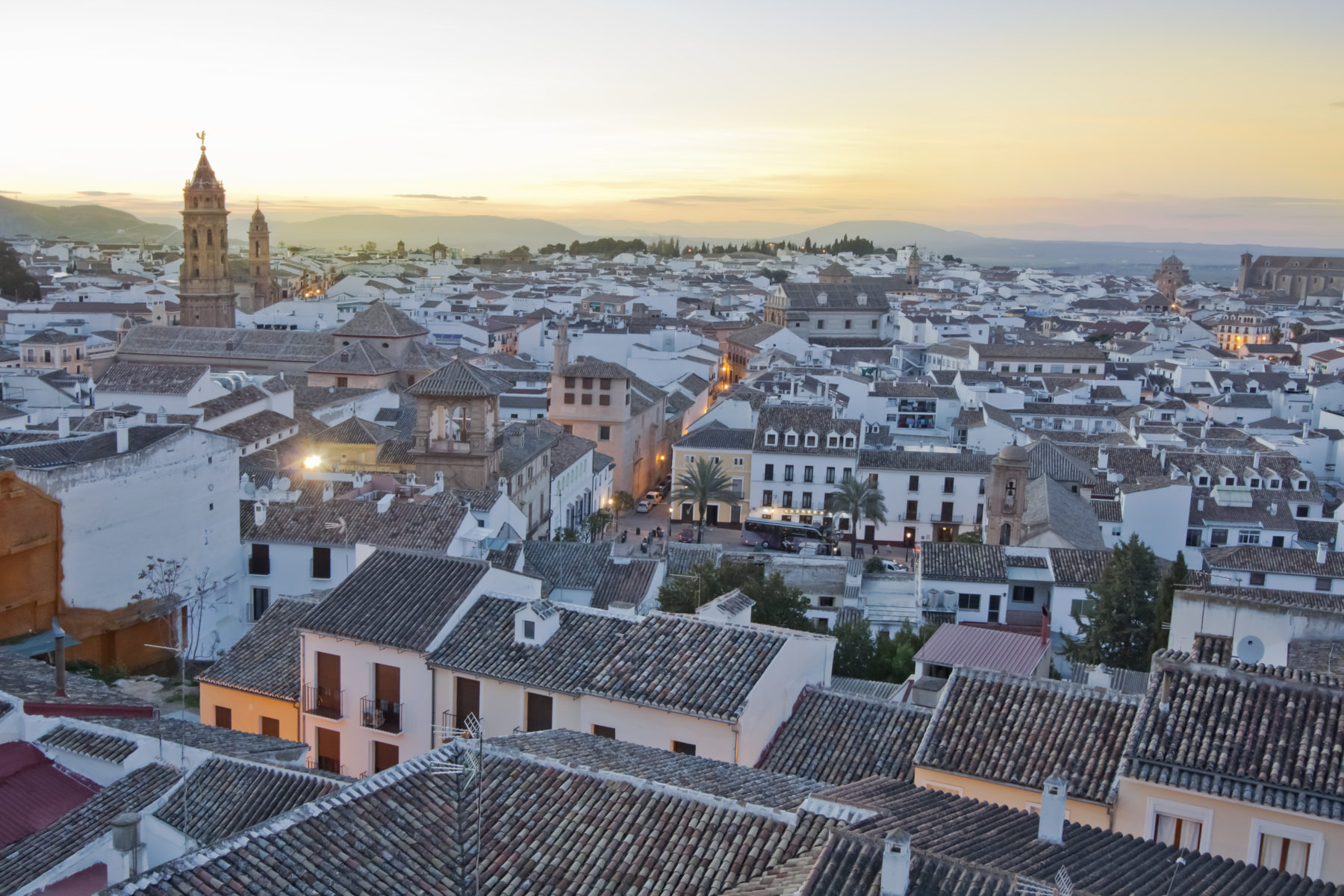 Whichever village you end up visiting, be sure to soak up the town’s unique vibe and interact with local residents. People are proud of their area’s heritage, and I found that many were eager to offer advice and show me around. I visited just a fraction of the many villages across Southern Spain, and I can’t wait to continue exploring more of this area’s exuberant, colorful culture.

Consider planning your trip around a festival. In Arcos de la Frontera, for example, you’ll find a flamenco festival in July, while Competa throws an annual wine festival around the fall harvest time.

Melanie W. is a writer and journalist living in Denver, Colo.
Loading Comments...