Orlando may be home to more than two million people and famous theme parks, but my family and I found three incredible places to escape the crowds and revel in nature.

When you hear “Orlando-area parks,” you probably don’t think of one of the world’s largest natural artesian springs, up-close wildlife sightings or canoe trails through the marsh. But that’s just what my husband, daughter and I found in Central Florida. While exploring the area’s natural springs, we encountered turtles, alligators and manatees that gave the world’s most famous mouse a run for his money. 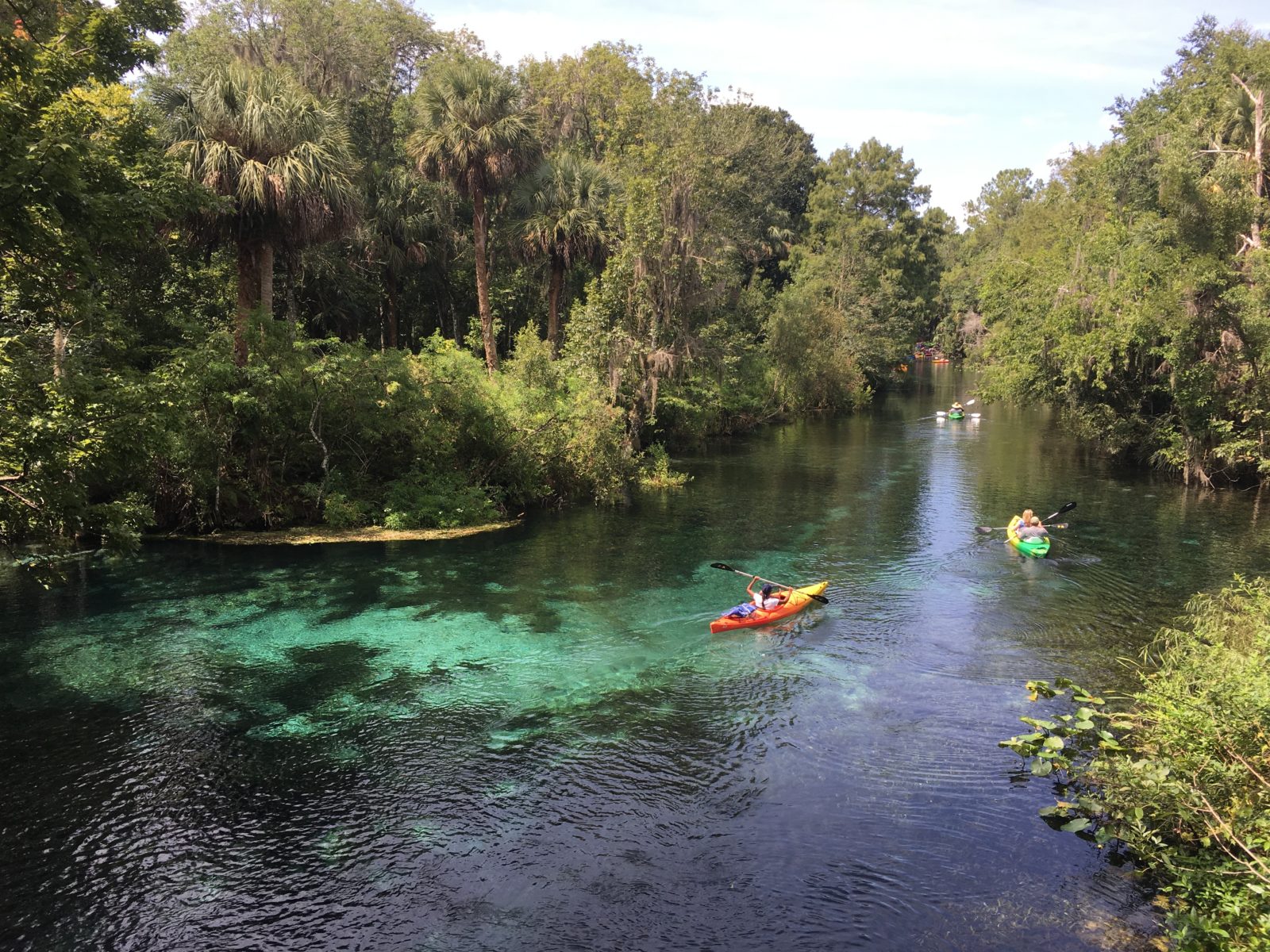 Through the Looking Glass

Established in the 1870s as Florida’s first tourist attraction, Silver Springs State Park is a mere 1.5-hour drive from Orlando. Although Silver Springs is famous for its glass-bottom boat tours, first we wanted to get the lay of the land. The 1,600-foot Ross Allen Island Boardwalk, completed in 2016, offered a soft introduction to the Silver River, where kayakers paddled along a 4.5-mile stretch of translucent water.

Next, we wandered through the small Education Center. Exhibits illustrated the park’s wildlife and Hollywood history, including vintage props from movies shot here, such as Tarzan and Creature from the Black Lagoon.

After lunch in the park’s Springside Restaurant, it was time for a 30-minute spin on the circa-1962 Chief Charlie Cypress, one of 15 glass-bottom boats in the fleet. Peering through the half-inch-thick window in the floor, I was spellbound by the electric-blue water and freshwater fish, including catfish, mullet and gar. 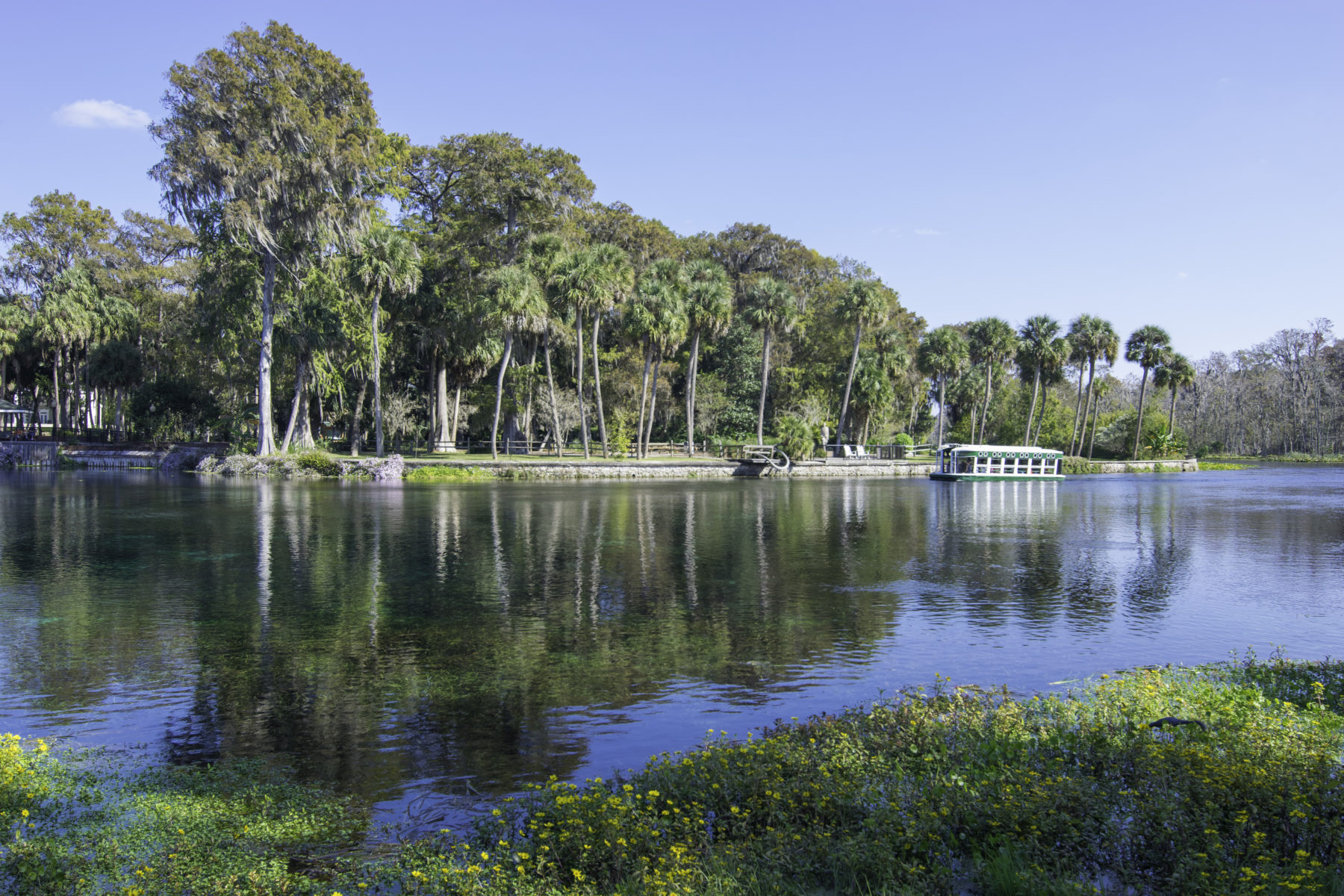 Our captain narrated as he steered over eight major springs (there are 120 in all), including the deepest: the 81-foot Abyss. Gushing 500 million gallons of water every day, the springs looked like submerged cracks in the earth, spewing billowing water and pebbles like snow.

Along the way, we passed turtles, snake birds and cormorants, as well as sunken manmade items like a Seminole canoe and statues from the 1960s TV series, I Spy.

At the conclusion of the tour, I felt as if we had found a hidden treasure, even though this 5,000-acre slice of pure Florida nature has been charming tourists for more than a century.

Don’t feed or approach wildlife at Silver Springs, including the rhesus monkeys that were released in the 1930s as part of a former park attraction. 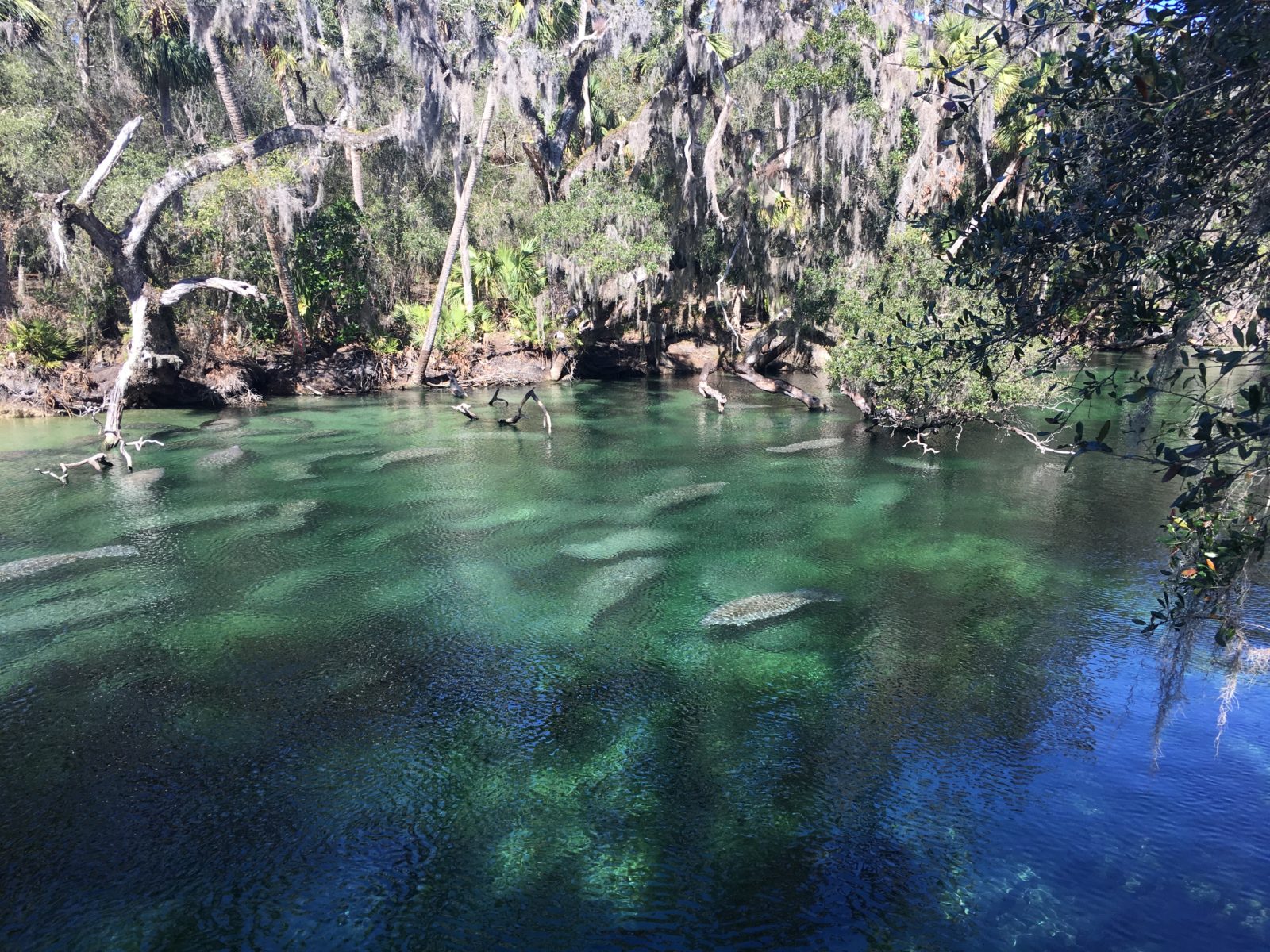 If the stars of Silver Springs are its glass-bottom boats, the headliners of Blue Spring State Park are its West Indian manatees. In the winter, hundreds of sea cows exit the chilly waters of the St. Johns River to find refuge in the 73-degree spring. One bright morning, we set off to explore this 2,600-acre state park, located 30 miles north of Orlando. When we arrived, it promised to be a banner day: a sign said almost 200 manatees had been counted.

We unpacked our lunch at one of the picnic tables dotting the main lawn, then let our daughter run around the weathered porch of the 1872 Thursby House, one of the first plantation homes built along the St. Johns. Ready to scan for manatees, we headed to the start of the one-third mile boardwalk trail. 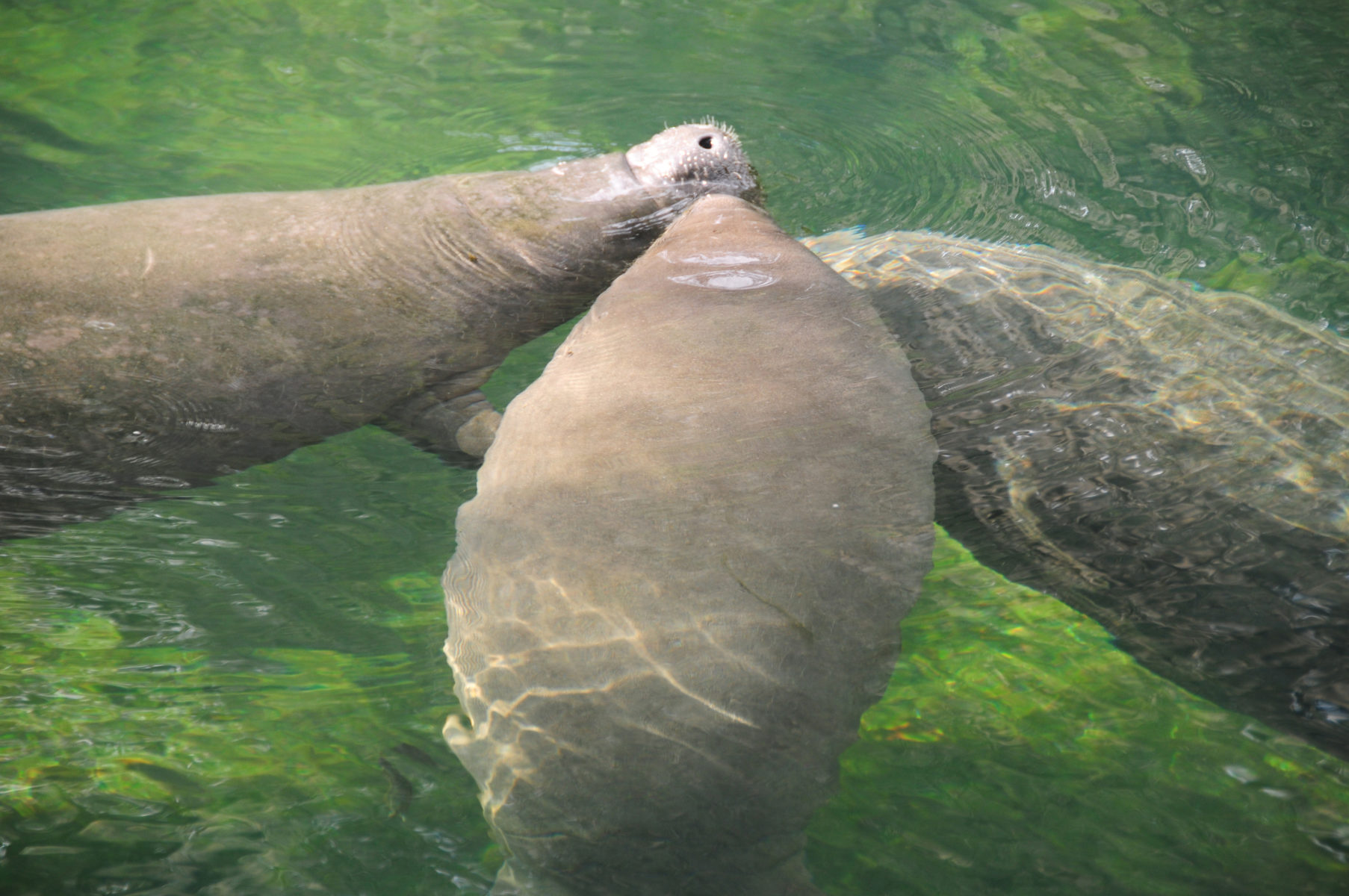 Straightaway we saw more manatees than we could count. We progressed from one viewing platform to another, watching in awe as their gray forms drifted through clear water. Thought to be the origin of mermaid lore, these endangered mammals weigh up to a ton but float quite gracefully.

We continued strolling along the boardwalk, moving upstream through the subtropical hardwood forest. At the terminus of the wooden trail, we could look down into the main vent, a gash in the bottom of the turquoise pool that discharges 104 million gallons of water daily. Before leaving, we took one last look at the manatees basking in their natural spa, and I was thankful to have paid a visit to their winter resort.

During the December-to-March manatee season, Blue Spring is only open for manatee viewing — all water activities, including swimming and diving, are closed. 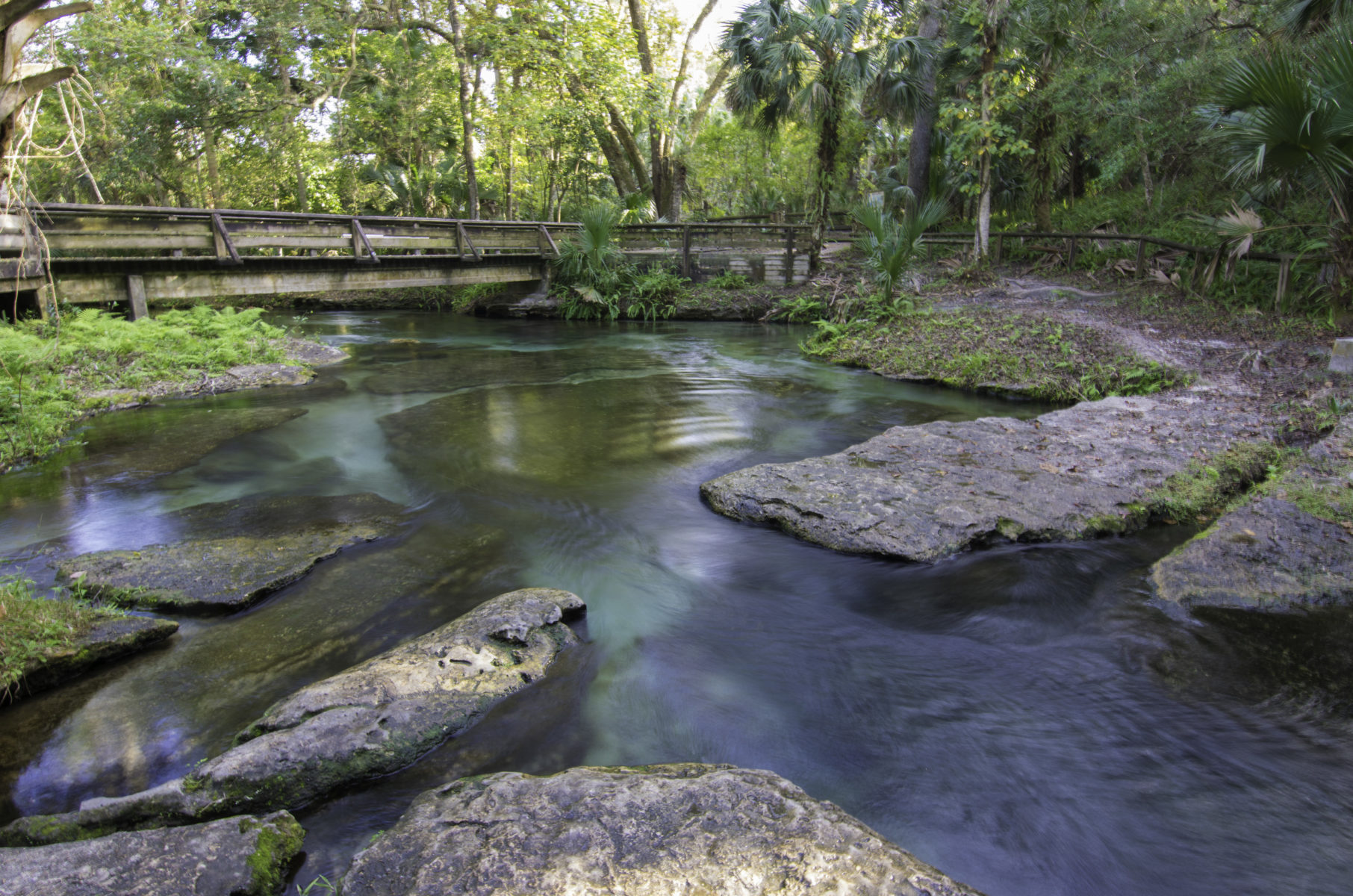 After journeying 45 miles northwest of Orlando, we traded walking shoes for paddles at Kings Landing in Apopka. The outfitter provides canoes and pickups along scenic Rock Springs Run and the Wekiva River. (The Rock Springs Run State Reserve offers a network of hiking trails, but no water access).

We launched in the early morning, the best time for spotting wildlife. We soon enjoyed our first sighting — a turtle sunbathing on a log. As kingfishers and herons swooped overhead, we kept our eyes peeled for other creatures and weren’t disappointed — the silhouette of an alligator soon emerged in the marsh. 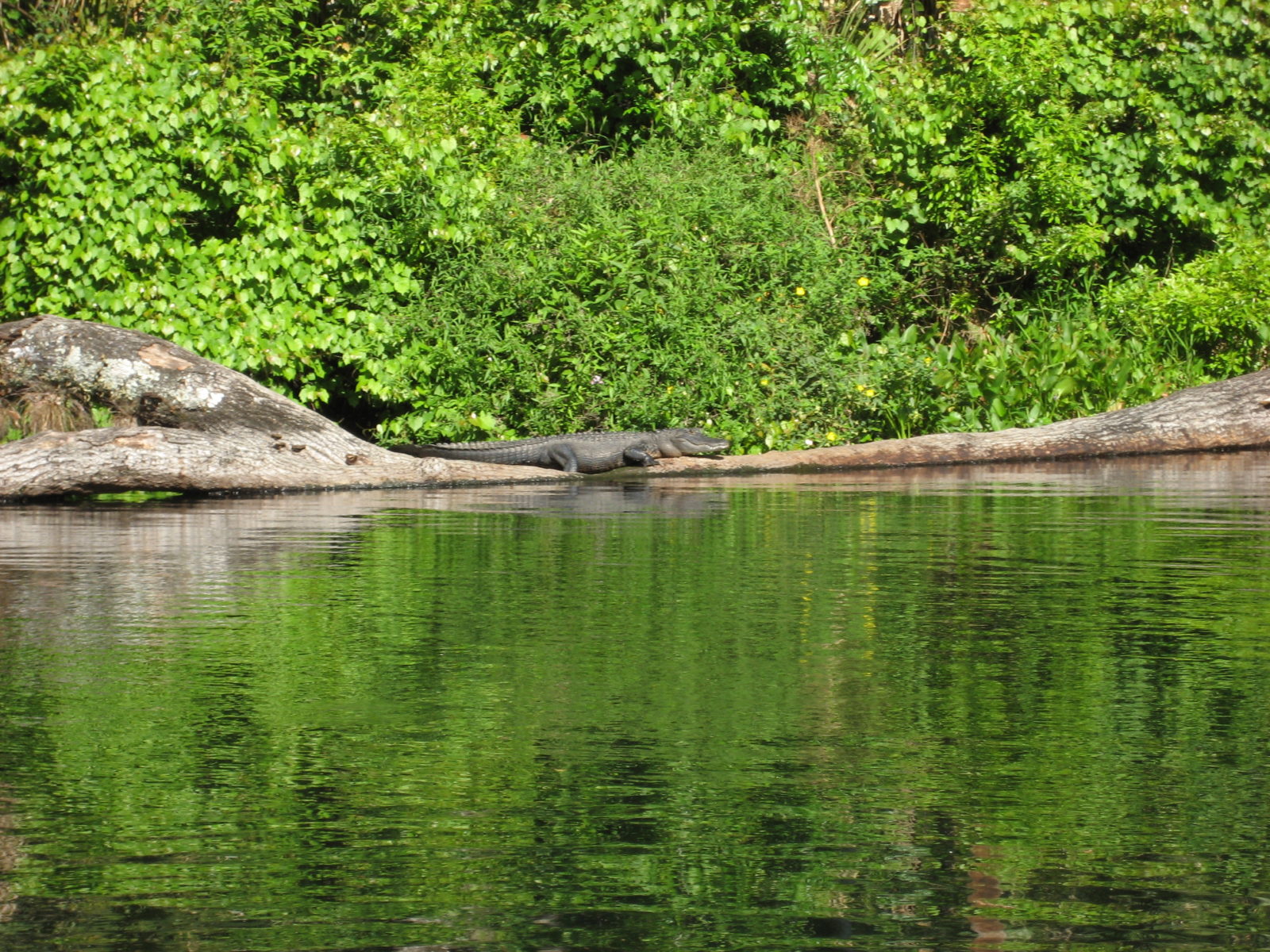 We carefully navigated the run, avoiding fallen trees and gliding around tight bends. The current propelled us, flowing three to four miles an hour. In this pristine pocket of Central Florida, we could hear only the sound of our paddles dipping into the water. The area, we realized, hadn’t changed in hundreds of years — still looking as it did when the native Timucuan people were the only sign of civilization.

With noon approaching, we beached our canoes at Big Buck Campsite to dig into our picnic lunch. As we ate, we discovered we weren’t alone — a curious raccoon approached us, hoping in vain for a handout. Later, after a four-hour and nine-mile paddling adventure, we pulled up to our pickup spot with aching arms and happy hearts. The day was only half over, but we were fully spent.

Kings Landing canoe rentals cost $50, cash only, which includes the boat, paddles, life vests and pickup at the end.

Where to Stay:
Marriott’s Cypress Harbour