The Sacred Monkey Forest near Ubud is one of Bali’s most popular attractions because of its notoriously mischievous residents. Here’s what you should know before you go.

How many people can say they’ve been mugged by a monkey? I can. It happened in Bali’s Sacred Monkey Forest, a mystical place on the outskirts of Ubud. The sanctuary, overgrown with thick canopies of emerald vines sliced by rays of golden sunlight, is home to three 14th-century Hindu temples — and about 600 Balinese long-tailed macaques.

The mischievous creatures attract throngs of travelers looking to capture the selfie to top all selfies — which often results in the perfect storm of human curiosity and monkey business. If you’re one such traveler, there are a few things worth keeping in mind before you enter the forest. 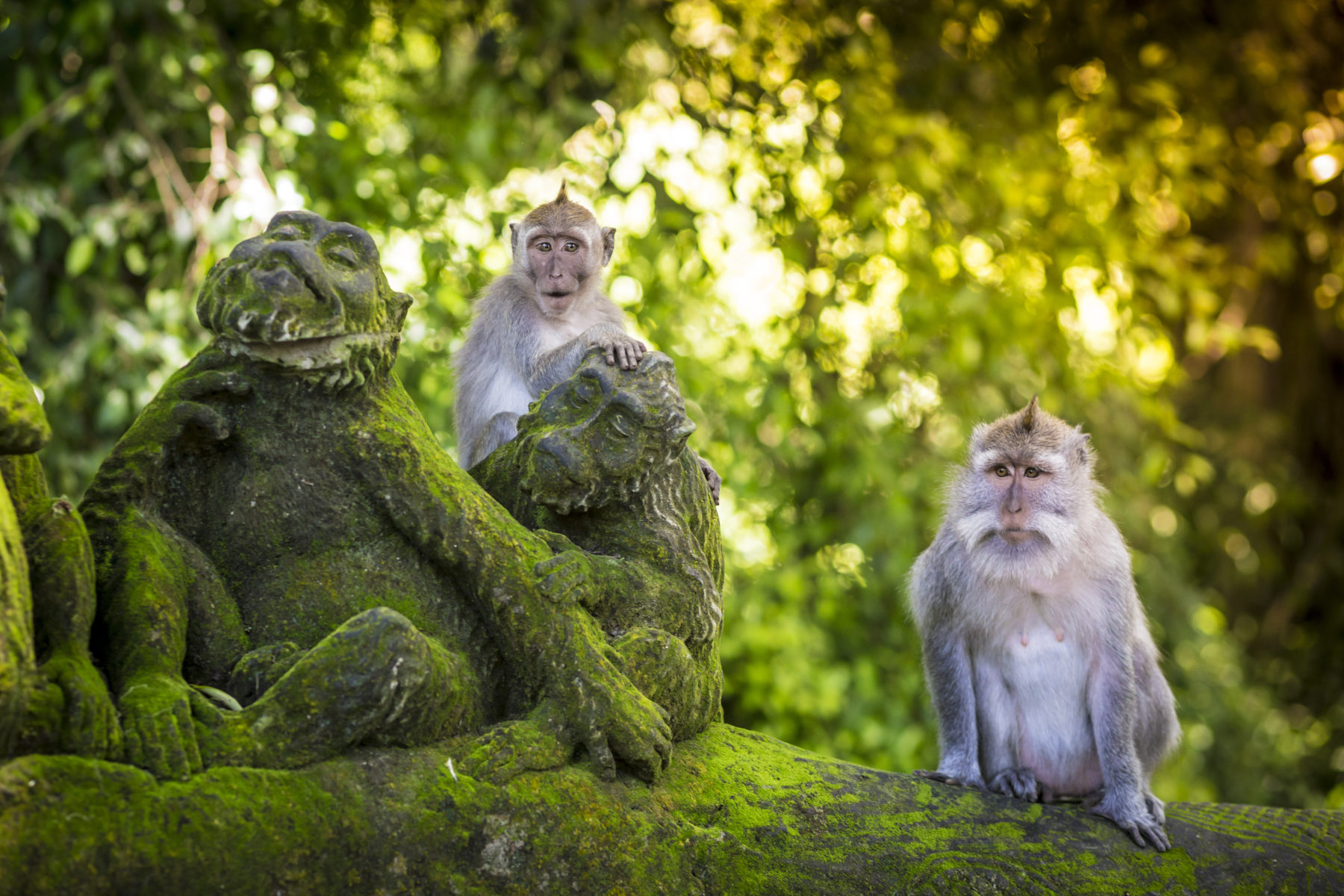 I visited for the first time with my friends, Sandy and Myrlene, who decided to buy a bunch of bananas at the gate. It seemed like a good idea in theory — monkeys love bananas, right? Myrlene clutched a bundle of the yellow fruit as we entered, and the first monkey appeared within seconds, nose in the air and eyes on the prize. Several others quickly joined; before we knew it, we had an audience.

Two silver-gray adult males inched closer to us, their bearded faces resembling wise old monks. Myrlene separated two bananas to give to them, perhaps expecting a Jane Goodall moment of tender inter-species communion. Instead, she got greedy pandemonium as both monkeys ran toward her. One jumped on her leg and tried to grab the entire bunch, which Myrlene instinctively tossed into the air.

“Take the bananas… I don’t want the bananas!” she yelled, as Sandy and I tried unsuccessfully to stifle our laughter.

Countless monkeys pounced on the scattered fruit, grabbing, peeling and talking in monkey gibberish. Once Myrlene got over the shock of having furry little gymnasts catapulting off her, she began to laugh, too. Even so, we would’ve had more fun if we’d skipped the bananas and simply watched the monkeys be monkeys. 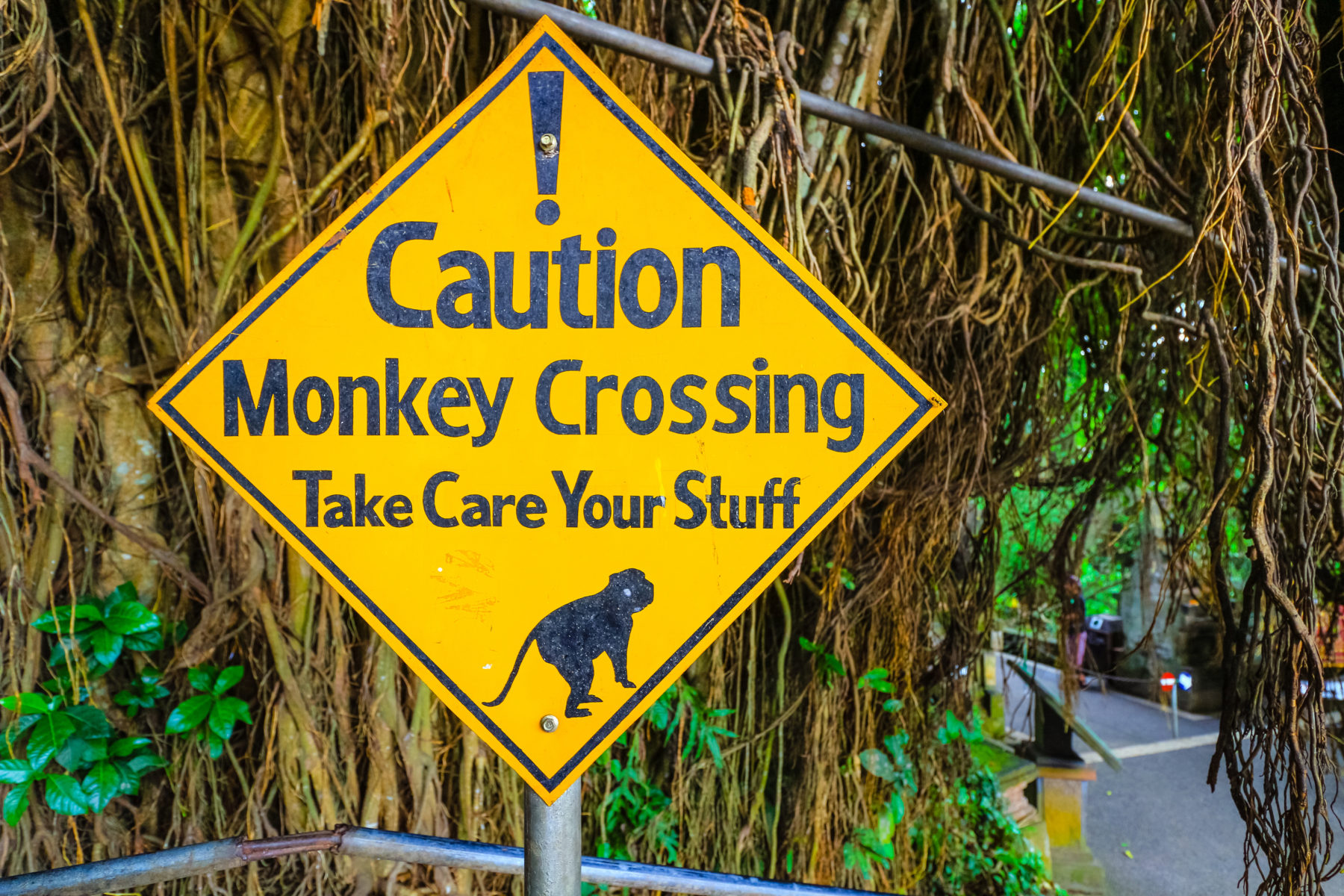 2. Keep your belongings to yourself.

Once we were banana-less, we figured the rest of our journey through the forest would be smooth sailing. We walked for a while, snapping photos of several adorable baby monkeys with wrinkled faces and mini mohawks. I watched as one small juvenile grabbed a piece of fruit with its long, spindly toes and pulled it apart with its nimble fingers. As I tried to take a picture with one hand, the plastic water bottle I was holding in the other tumbled to the ground. Before I could retrieve it, another agile youngster grabbed it and scurried away, and I came to the realization that I had been mugged by a monkey.

The small thief shook the bottle, first curiously and then furiously, before yanking the cap off with his teeth and pouring the water all over his head. It was fun to watch, and I couldn’t blame him — after all, the weather was sweltering. But for the rest of the visit, my friends and I gripped our remaining possessions tightly when we were using them and kept them stowed in our bags when we weren’t.

The monkeys are drawn to shiny, dangly things, so take off your sunglasses, and leave your jewelry back at your hotel. 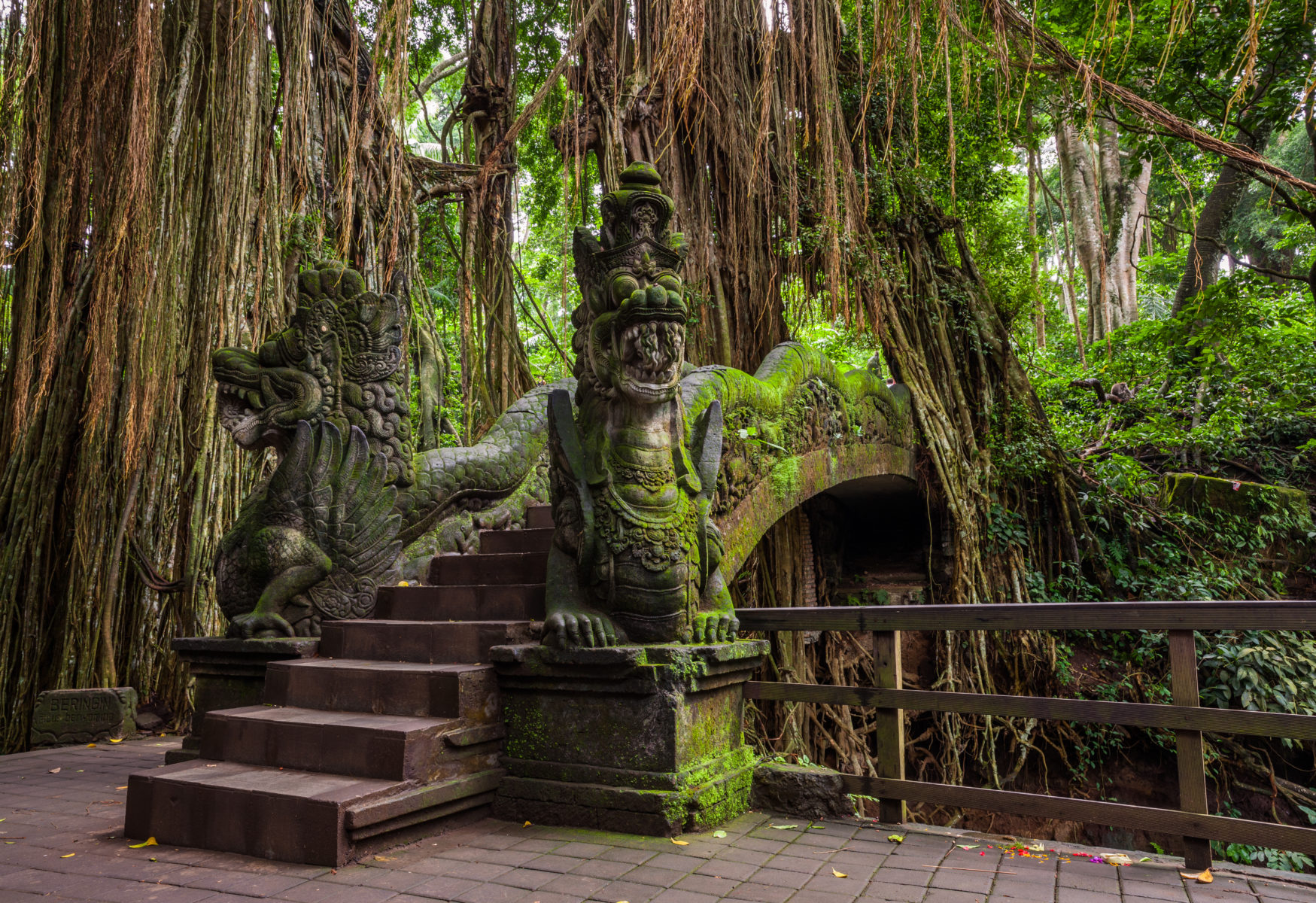 3. Take time to see more than the monkeys.

We had previously read that monkeys aren’t the only draw in this sacred forest. So after the initial excitement, we were ready to enjoy the sanctuary’s more sedentary features. We wandered further into the forest to find carved statues of serpentine dragons, ample-tongued deities and, of course, stone monkeys among otherworldly layers of moss and the dense roots of towering banyan trees.

The most fantastic carvings were the two intricate, imposing komodo dragons guarding the Holy Water Temple. We approached in awe, almost thinking they might spring to life. They didn’t, of course, and we were able to “ooh” and “ahh” in peace — and snap some terrific photos for posterity.

The three 700-year-old stone temples in the sanctuary are considered sacred by the Balinese and should be explored respectfully. Only enter if you’re dressed appropriately (with your arms and legs covered) and intend to offer prayers.

As I left the forest that muggy and memorable day, I knew I’d return. When I did, I was wiser about the ways of the monkeys — or so I thought. I warned a pair of first-timers I’d met at my hotel about tempting the rascally residents with bananas, and we all entered the forest fruit-free.

I couldn’t warn everyone in the forest, though, so we did witness a few other travelers learning lessons one and two in real time. Sure enough, some people found themselves in the midst of a banana-frenzy similar to the one Myrlene experienced. We also saw a kleptomaniac monkey snag a pair of sunglasses right off a man’s face; and then, as an unsuspecting young woman was distracted by two playful macaques, a third one reached into her shoulder tote and pulled out a comb. Luckily, she yanked her bag up before the trickster could steal her wallet or phone. She was certainly surprised — but hey, now she can join me in saying she’s been mugged by a monkey. And that’s a fun story to tell.