Even before I officially arrived in Las Vegas, the Strip — visible from miles away on a dark night — immediately demanded my attention. No matter where I looked, there were glittering attractions for every personality, and enough wattage to make sure I spotted them all: the famous Welcome sign, the Bellagio’s dancing fountains, the High Roller Ferris wheel, all packed with a vibrant rush of people visiting from all over the world.

But while I was eager to immerse myself in all this celebrated glitz and glamour, I didn’t want to head straight for Sin City’s bedazzled heart without first understanding how and why it became an always-on entertainment mecca. As I would soon find out, the rich history of Vegas has never stopped pumping throughout the city’s veins — and its historic signs, which are being revived and re-illuminated, are the key to discovering it. 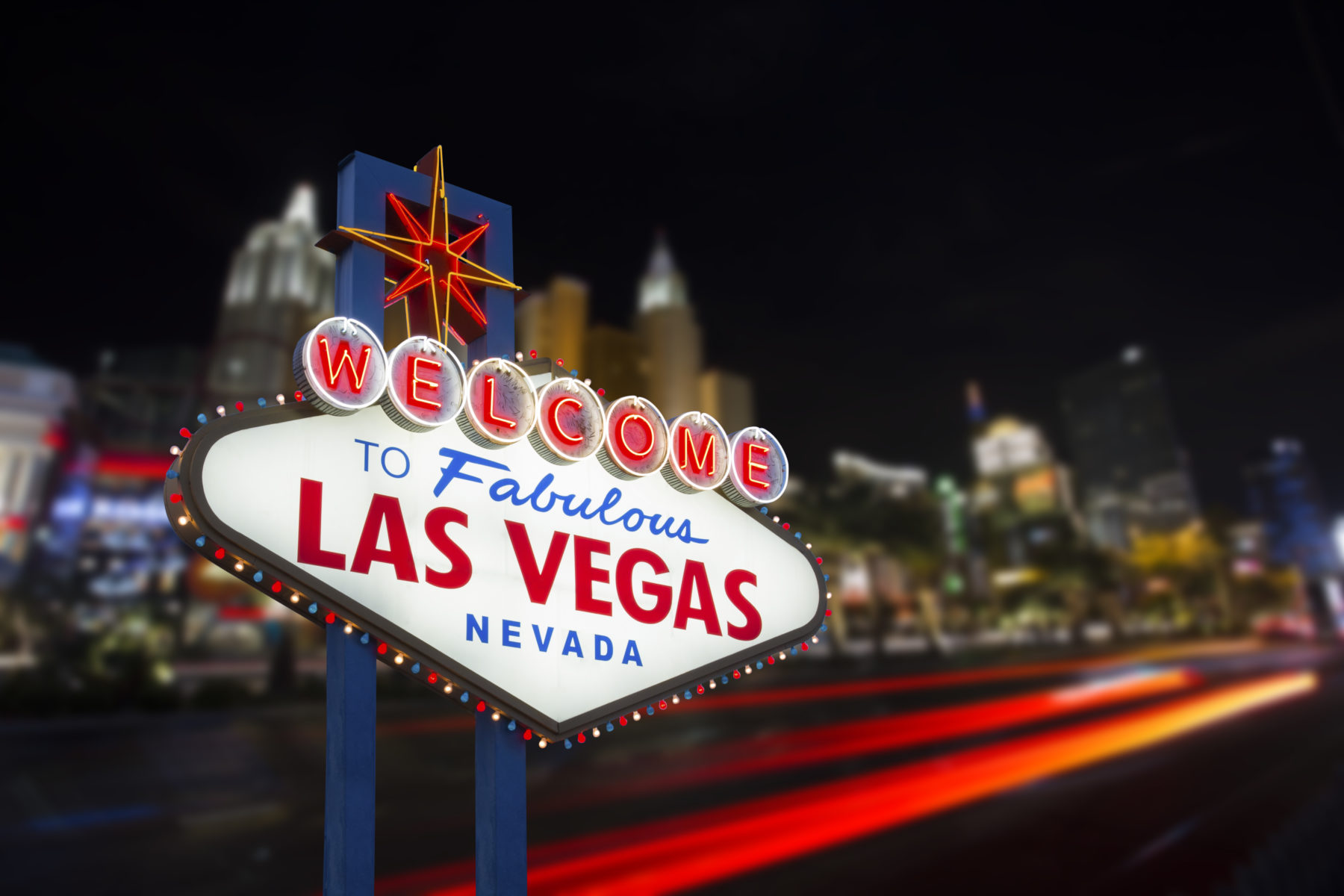 What better place for me to start than at the seminal Welcome to Fabulous Las Vegas sign on the south end of the Strip? Built in 1959 and based on a career-defining Betty Willis design, the landmark earned a long overdue spot in the National Register of Historic Places 50 years later. Mayor Oscar Goodman and former Playboy model Holly Madison marked the occasion by hosting the World’s Largest Bikini Parade (A little showy? Of course. But after all, this is Vegas!).

As I pulled into a parking spot on the street leading up to the local fixture, I was struck by the timeless look that’s landed it in Hollywood fantasies like Fear and Loathing in Las Vegas and The Hangover. I also noticed the growing line of gawkers — including at least three wedding parties — who simply wanted to swing by for selfies. Me, I couldn’t help but see this sign as the foreword to a forgotten story told through lights.

Signs of the Times

To put the city’s many chapters in perspective, I booked an 11 a.m. tour — the break of dawn in Vegas terms, maybe, but it’s also before the desert heat and natural light get too harsh — at The Neon Museum. Now celebrating its twentieth year of preserving, restoring and displaying Sin City’s beloved signage, this passionate nonprofit offers 60-minute guided surveys of its beautiful “Neon Boneyard.” 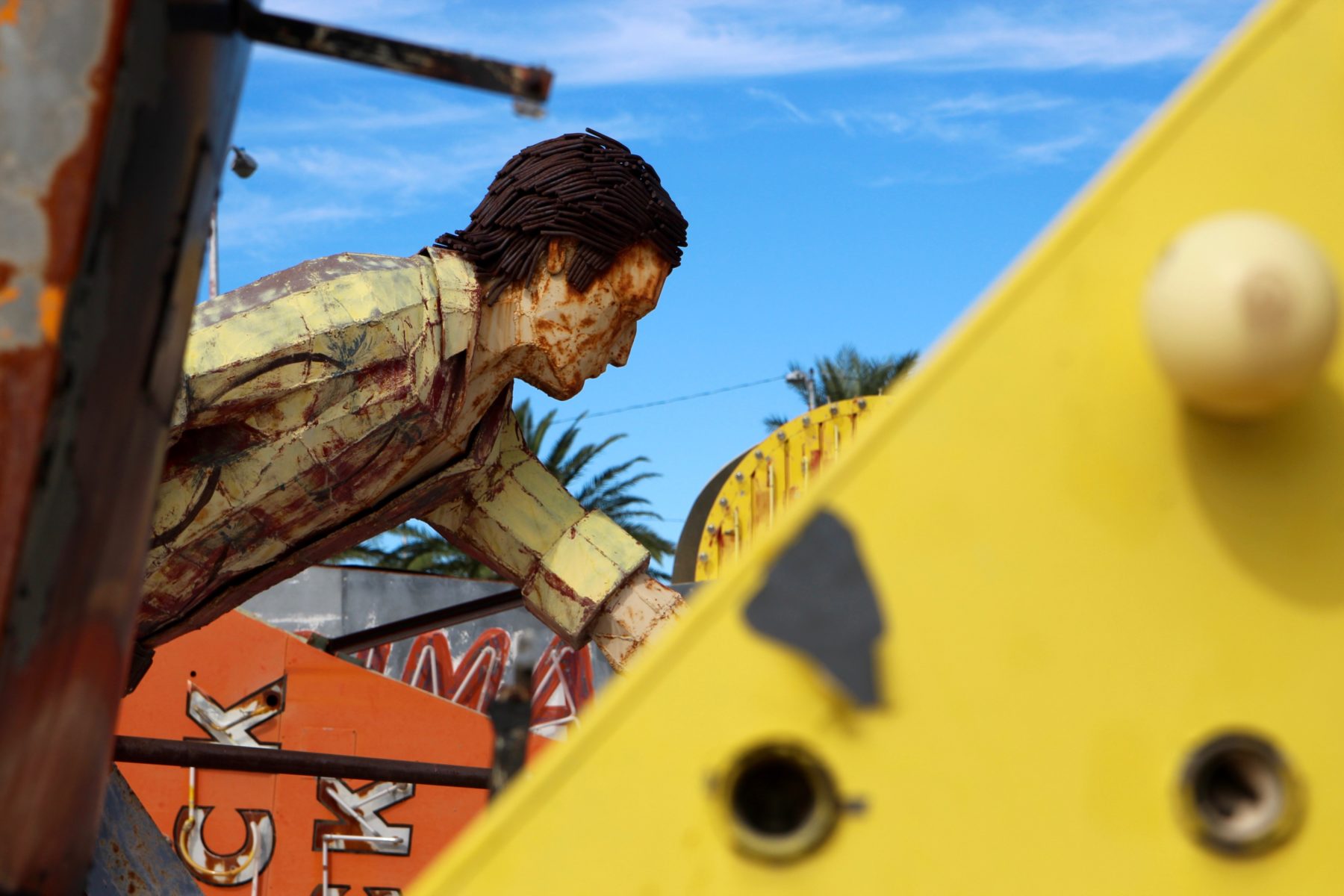 Since photos are encouraged and there are more than 200 monuments here, I’d like to point out a few Instagram-worthy pieces. Let’s start with the steel “mullet man” who once stood atop Doc ‘N’ Eddy’s Pool Hall. At ten feet tall, he’s a striking symbol of how small Vegas businesses have used showy metal sculptures — not just neon — to attract a steady stream of tourists. Also of note: a nearby skull from Treasure Island’s massive pirate marquee. Former massive pirate marquee actually; after opening in 1993, Treasure Island was rebranded as “TI” ten years later and lost its skull-and-crossbones facade in favor of a giant video screen.

Sacrilege, I say! This is why the Neon Museum is an essential stop: It’s a crash course in Vegas culture shaped by our collective imagination, not just technology. And it reaches as far back as the ’50s, when the Stardust was the world’s largest resort hotel and the Moulin Rouge became Vegas’s first integrated casino — a major supporter of African-American artists like Duke Ellington, Sammy Davis, Jr., and Sarah Vaughan. Did I mention who designed its short-lived sign? Why, none other than Betty Willis, whose work on the Moulin Rouge and the aforementioned welcome sign helped define the city’s now-iconic look.

Field Trip down the Strip

The trivia tips and nostalgia trips don’t stop there. They spill onto the streets through the Las Vegas Signs Project, an ongoing public-art partnership between the Neon Museum and the city itself. Across the street from the museum’s main building on Las Vegas Boulevard, I spotted a display stand topped with the Silver Slipper casino’s namesake sign, a shell of the neon shoe that once drove Howard Hughes mad. (It used to rotate, fueling Hughes’s fear of being watched; he reportedly bought the casino as part of a multimillion-dollar deal, and then shut down the sign’s motor.) 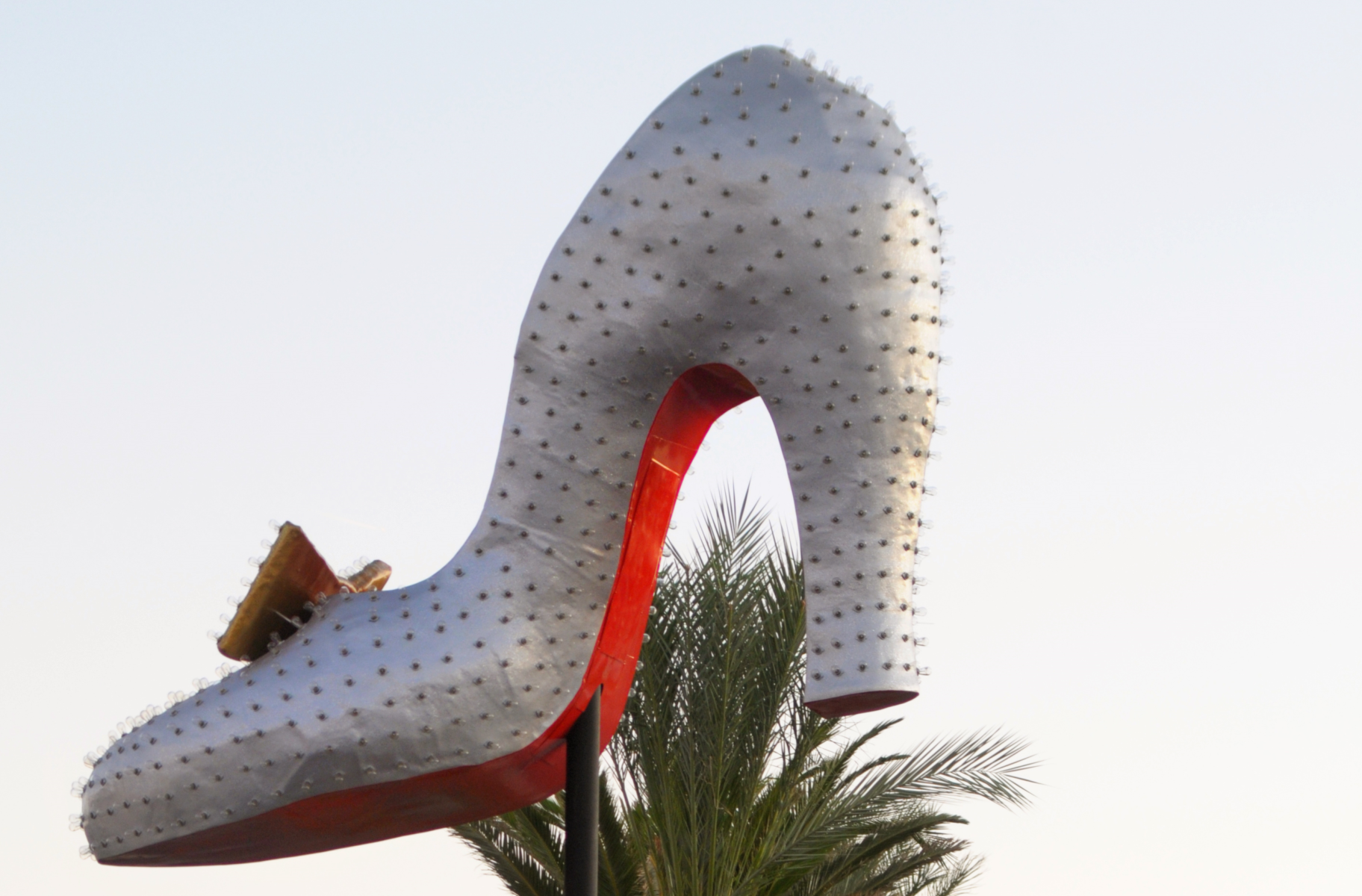 This stretch of road spanning from Sahara Avenue and Washington Avenue is now a National Scenic Byway, one of only three urban byways in the United States. A map is downloadable online and includes the Silver Slipper and eight other lovingly restored signs. It’s an enjoyable three-mile drive (stop by Eat for elevated brunch fare between 8 a.m. and 3 p.m., or if you’re taking the trip in the evening, hit Atomic Liquors — a favorite of Barbra Streisand, the Rat Pack and Clint Eastwood back in the day).

A walk down the “Urban Gallery” of signs will land you at the door of our last stop: the Fremont Street Experience. Today it’s an unabashed tourist mecca: An LED-lined canopy hangs over the entire area, and a zip line, the World’s Largest Video Screen and street performers all but erase downtown’s sordid rep as “Glitter Gulch.” 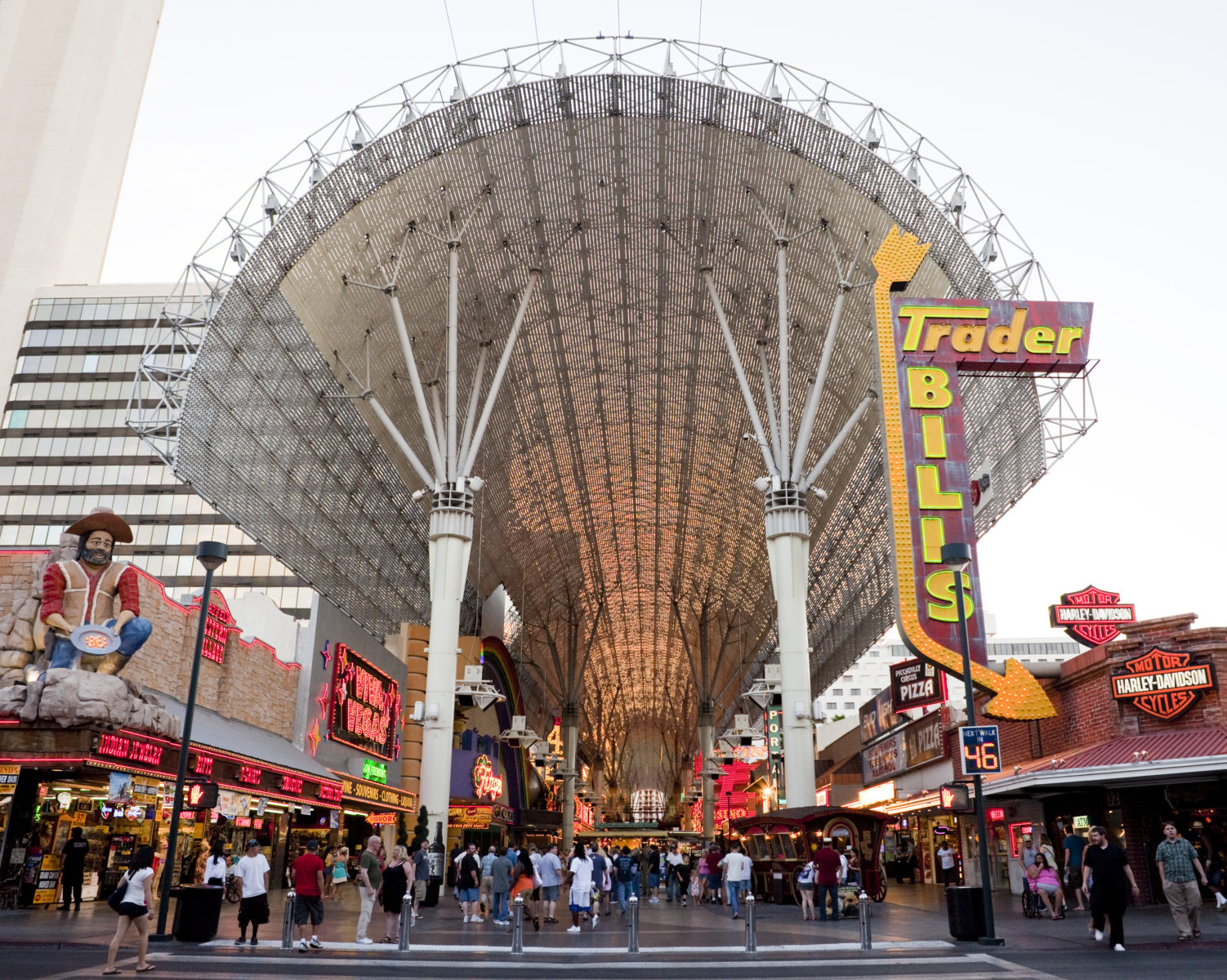 Look closely, however, and you’ll find prime examples of Vegas’s past. Take Vegas Vic, for instance. The Las Vegas Chamber of Commerce first created his character in the late ’40s to welcome tourists with a smile and a catchphrase. Sketches of the cigarette-chomping cowboy were turned into an animated neon sign on the side of the Pioneer Club in 1951, and his iridescent love interest, Vegas Vicki, went up across the street 30 years later. (The happy couple was “married” before a crowd of confused guests in 1994.)

One thing you won’t find — or rather, hear — here anymore is Vic shouting his catch phrase (“howdy podner!”) every 15 minutes, like he did for decades. Actor Lee Marvin was so appalled by this buffoonery during the filming of The Professionals in the 1960s that he asked the Pioneer Club to mute its mascot. The casino complied, and while Vegas Vic was turned back on during the ’80s, he was muted once again in 2006.

Thankfully, through the tireless efforts of countless Vegas fans and preservationists, the rich past of this raucous city is still speaking — through these beloved icons of the city’s early years. You just need to know where to look.