When you drive north along the Queen Kaahumanu Highway out of Kailua-Kona, on Hawai’i Island, you’ll notice the local version of graffiti. The messages are written in stark white coral reef along miles of black lava rock that surround the road.

Quite a few stunning sunsets have passed over that coral reef graffiti since I spent a summer on the island during my carefree college days, but I still remember the words that stuck out most: La Bella Vita (“the good life,” written in Italian). The phrase spoke so truly to what I experienced that summer: hours on my surfboard in the warm ocean, trade winds rustling the coconut fronds outside my window, and drives with the windows down, the reggae up and my fair skin turning golden from the sun. 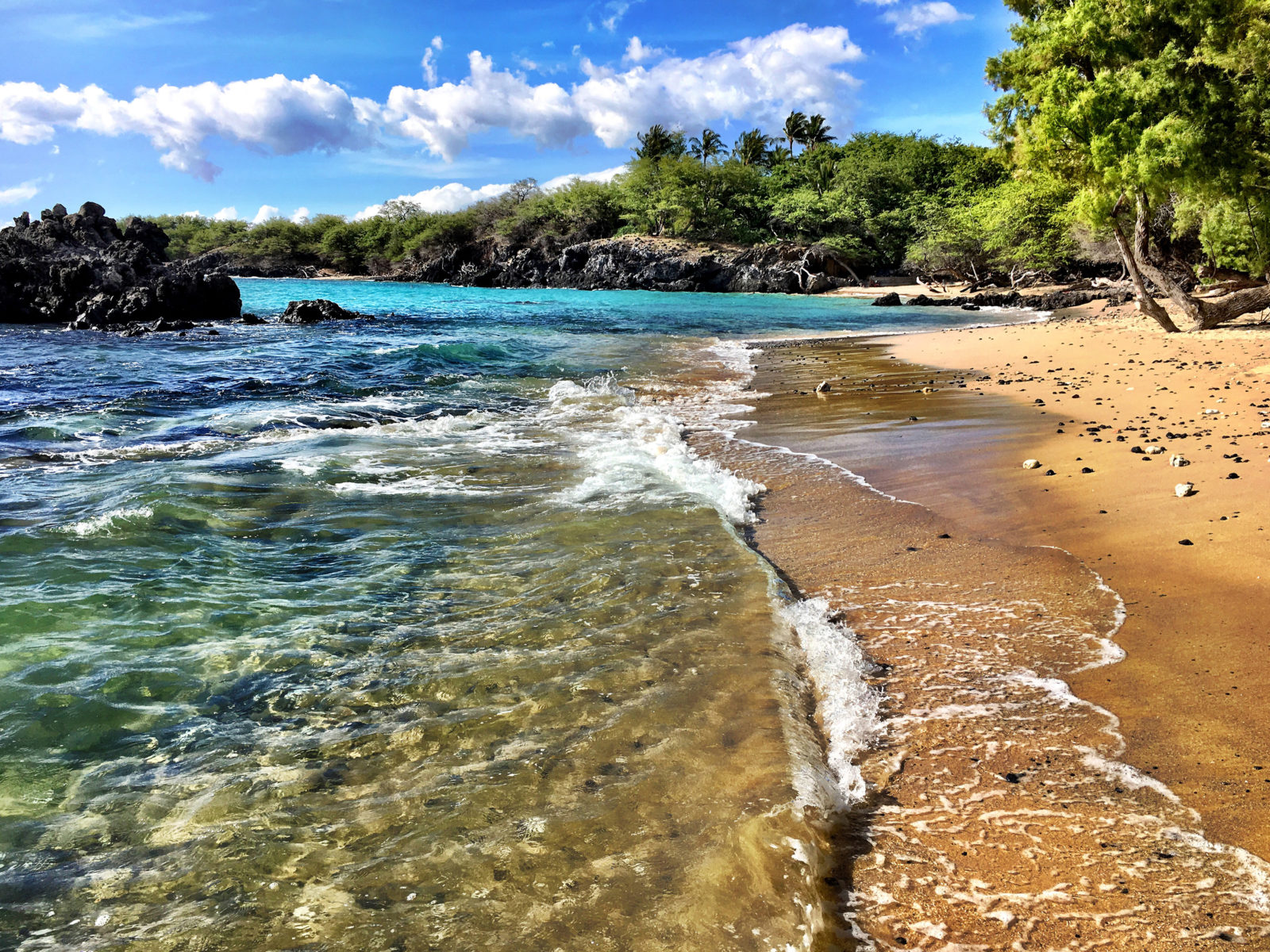 I ventured all over the largest and southernmost island in the Hawaiian chain with my roommate, a Kona native. While spending a summer on the island is ideal, you can get the same thrills in just four days there.

Unplug! When I stepped off the plane, I wasn’t carrying much more than a swimsuit, sunscreen and a surfboard. I didn’t have a smartphone in tow, and I credit my vivid memories of that coming-of-age summer to that lack of technological distraction. I was present. You’ll want to be, too. 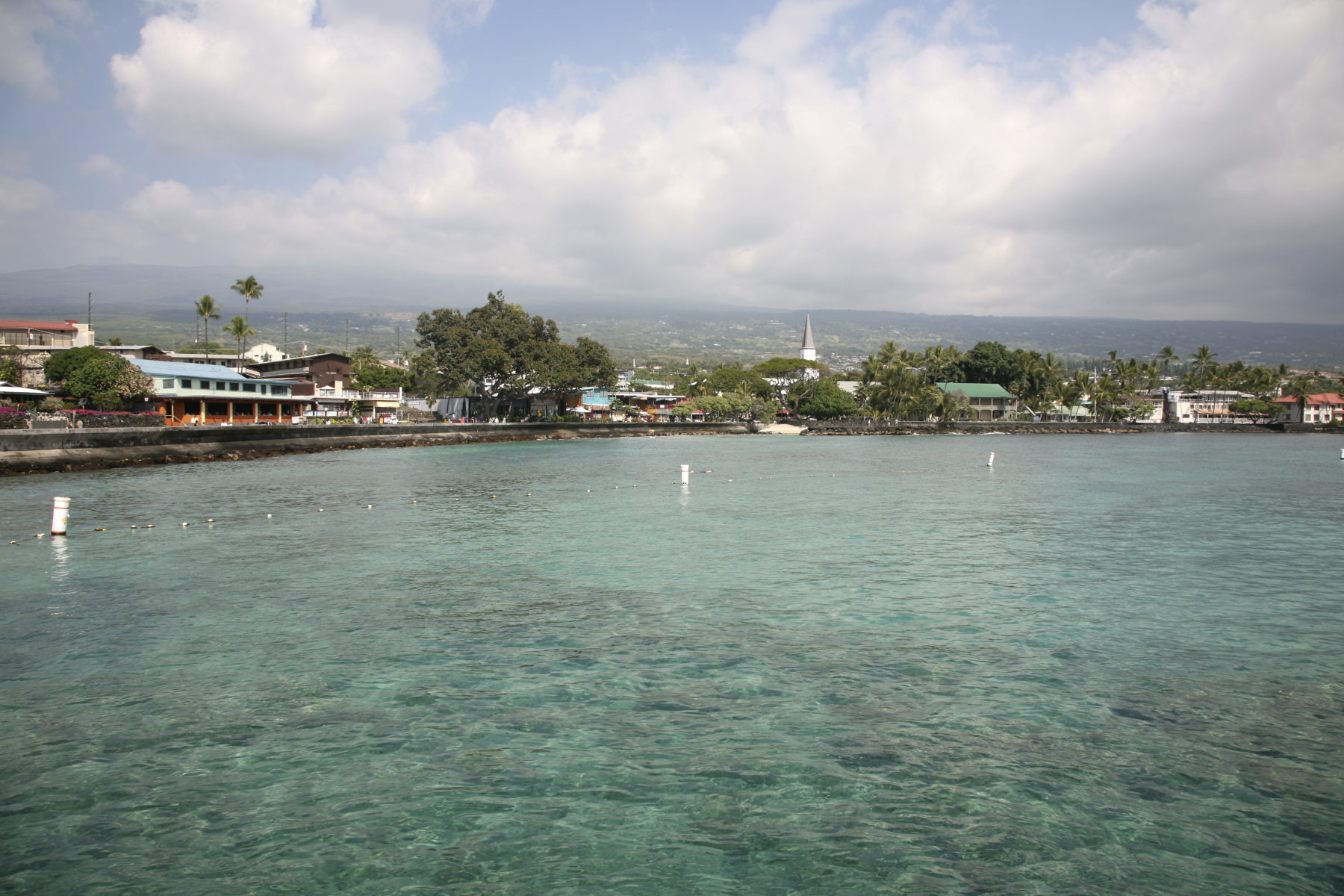 Enjoy a lunch of fresh sushi.

Head into Kailua-Kona for some fresh sushi at Hayashi’s You Make the Roll, a longstanding island favorite. You’ll have to search to find the place — a hut with some outdoor tables tucked away in an alley — but it’s worth it. The rolls are huge, the prices are cheap and the ingredients are fresh and surprising. I suggest adding sweet papaya to a spicy tuna roll, or try covering your sushi with melted cheese.

The typically sleepy Kua Bay sits just south of Marriott’s Waikoloa Ocean Club, and it’s touted as one of the most beautiful beaches in the world. Getting there used to require a 20-minute walk over sharp lava rock (a bit tricky when you’re wearing flip-flops). Now, a road and a parking lot make this beach more accessible — and crowded. But it’s still worth a stop. On several occasions, I jumped off protrusions of lava rock into the cerulean water and swam face-to-face with sea turtles, or honu, as Hawaiians call them.

Splurge for dinner by feasting in the dining room side of the classic Kona Inn, which shares its waterfront view with a more casual café-grill under the same roof. The macadamia-nut-crusted mahi-mahi served with a chive plum sauce was my go-to meal, and it’s still on the menu today. Just make sure to save room for dessert — specifically, the tantalizing Kona Inn Mud Pie with layers of Oreo cookie crust, whipped cream and — score! — coffee ice cream made with local coffee beans. 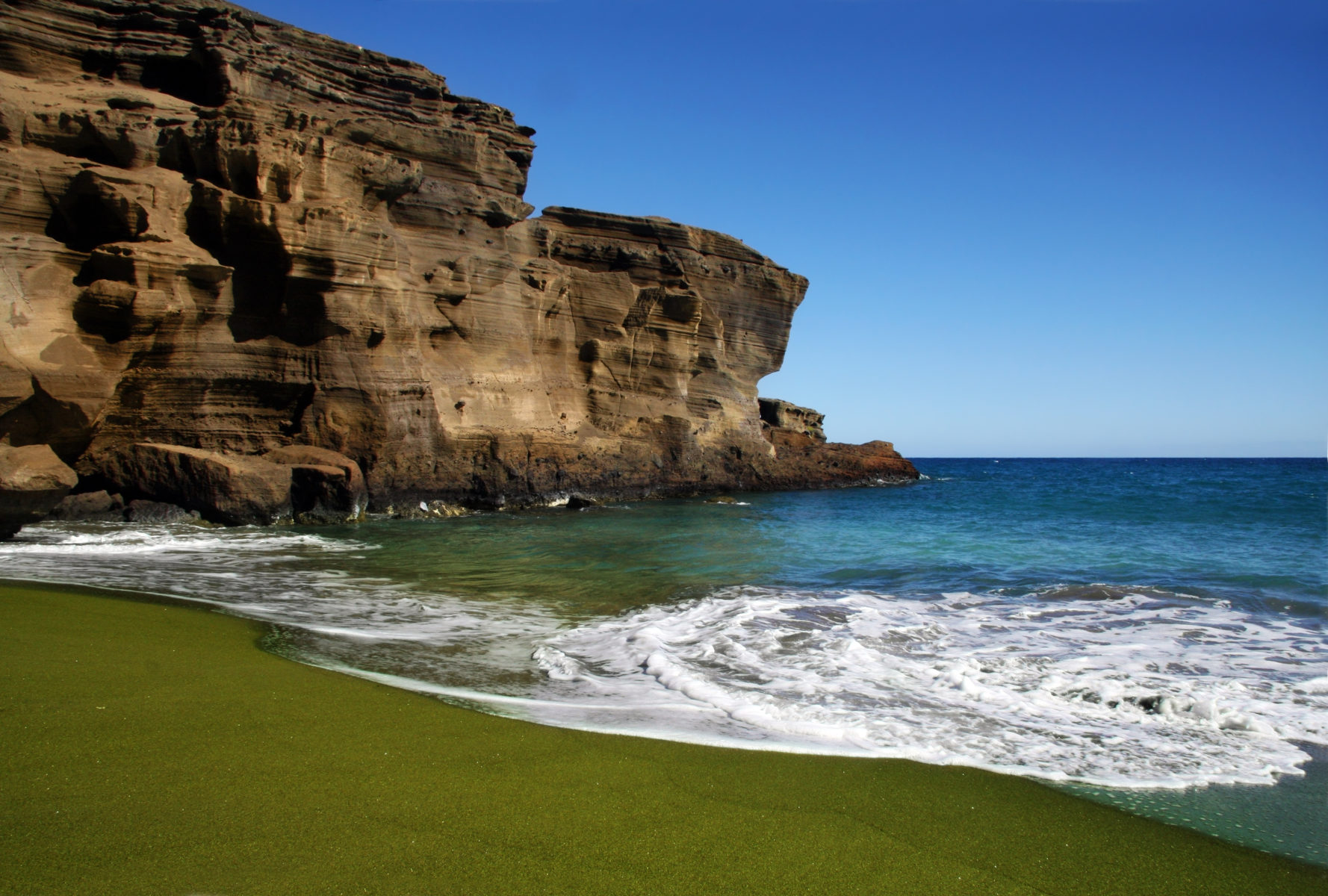 There are only four green sand beaches in the world. You can experience one of them by trekking to Papakolea Beach, a cinder cone also known as Mohana Bay or Green Sands. The beach was formed by volcanic eruptions around 50,000 years ago. You can only reach it by foot via a 5.3-mile round-trip hike along rutted dirt roads traversing pastureland. My friends and I used to hike there in swimsuits toting boogie boards so we could slide down the steep sand dune.

After my Papakolea hikes, I would usually head to the nearby town of Naalehu for a bite at Shaka Restaurant. It’s best known as the most southern bar in the United States. You may also want to stop for a treat at the Punalu’u Bake Shop. The popular spot offers Hawaiian sweet breads and malasadas — Portuguese doughnuts with sweet fillings like coconut and raspberry. 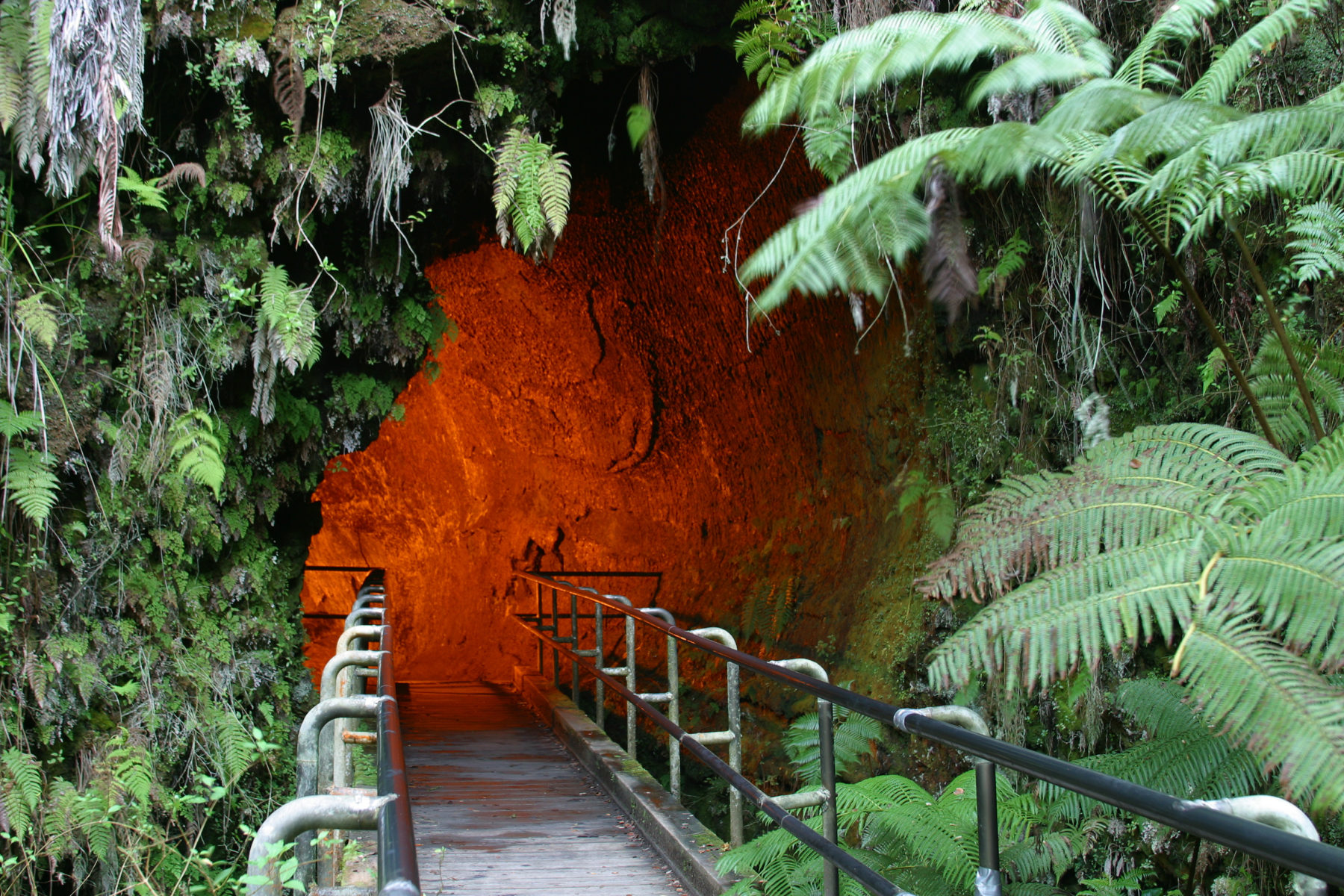 No trip to the Big Island is complete without a visit to Volcanoes National Park, where active volcanoes erupt before your eyes. I’ll never forget walking close to the flowing lava and feeling the heat rising from the ground beneath me. And there’s plenty to do beyond viewing the spewing lava: hike across craters, descend into lava tubes with flashlights and take in the caldera views from Thomas A. Jaggar Museum. After a day of discovery, grab a bite at the nearby chalet-like Kilauea Lodge up in the mountains near the park (reservations recommended). 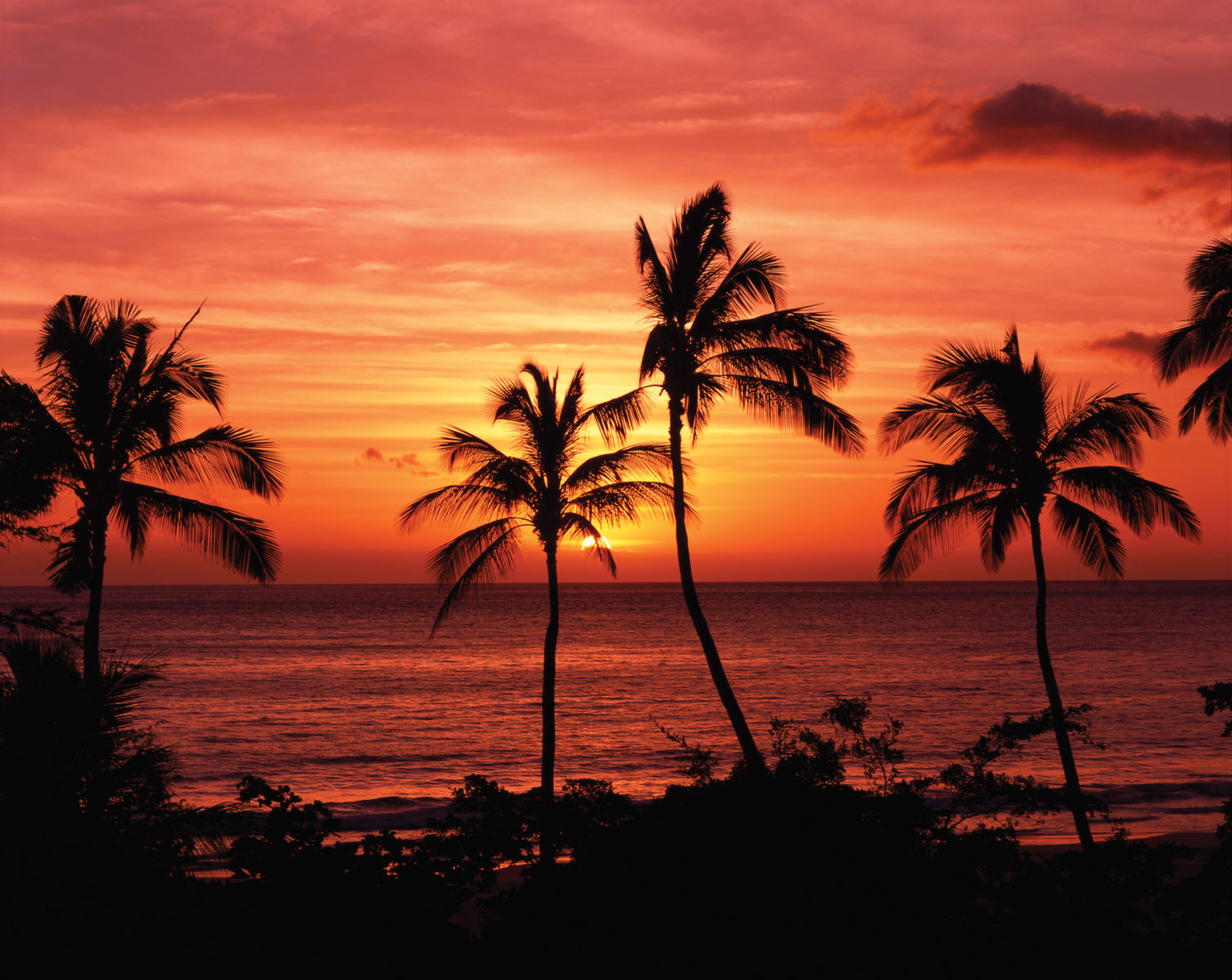 Visit Hilo and the Waipi’o Valley.

Circle back toward Kona by way of the lush side of the island. First, stop in Hilo for a quick walk up a paved path to see Akaka Falls State Park and its 422-foot waterfall. Then head to the less touristy Waipi’o Valley (often called the Valley of the Kings), where 2,000-foot mountains rise up spectacularly from the valley floor. You’ll be surrounded by black sand beach, taro farms and trails, so you’ll find plenty to explore.

All beaches in Hawaii are public, so you can frequent any stretch of sand at any resort you like. Once you’ve found your little slice of heaven, grab a lounge chair, order a Lava Flow or a Mai Tai and enjoy the serenity.

If you have an extra day, visit Mauna Kea — the mountain offers unparalleled stargazing that’s well worth a stop.